Protector's Heart: From The Mouth Of A Young Woman, Hope 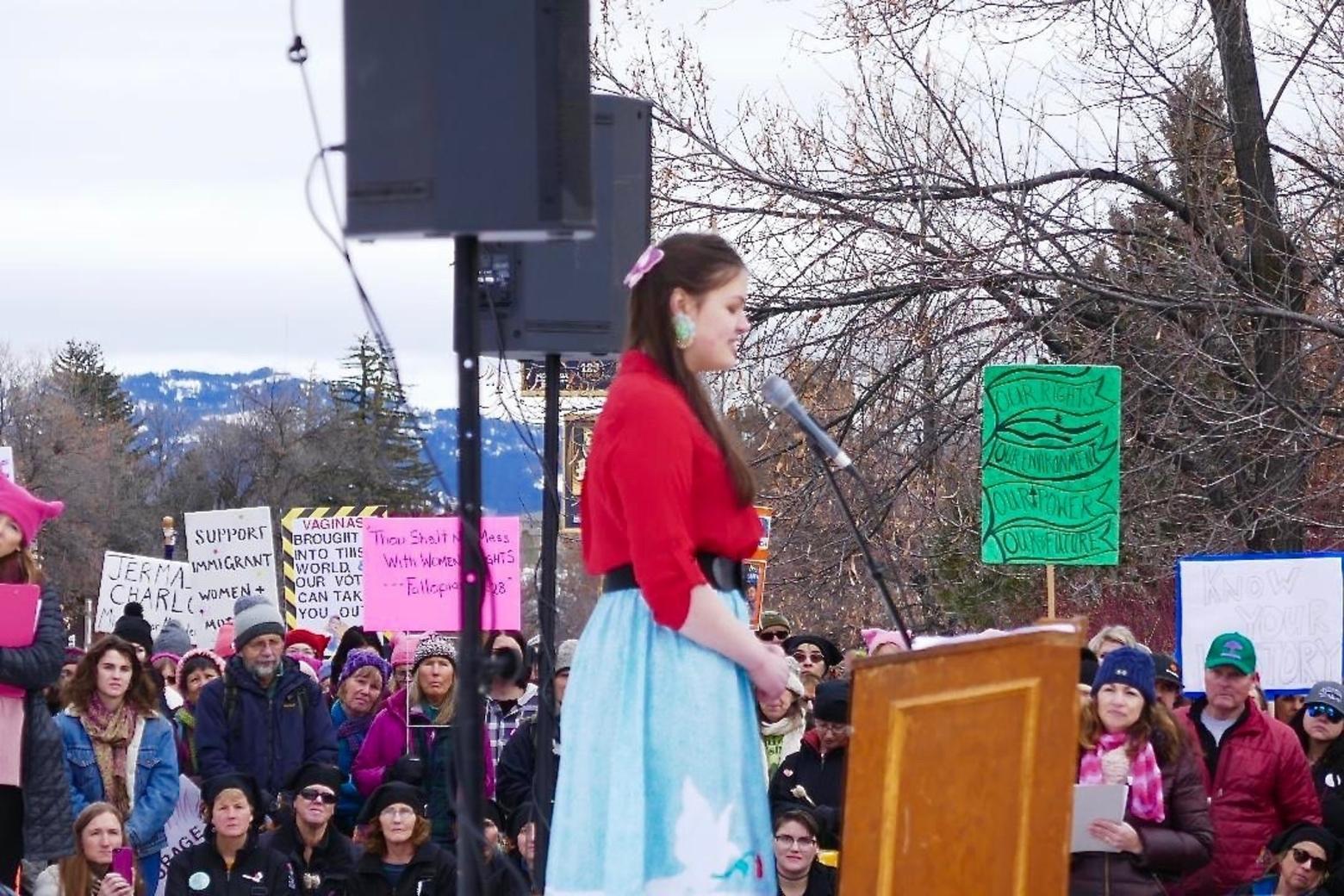 Florence Doyle touched upon some heavy topics in Indian Country but the stories she told were about young people leading change and embracing hope. Doyle and other young women wore red, to call attention to the disappearance and murder of thousands of indigenous women in America. Photo by Tim Crawford.
EDITOR’S NOTE:  Last Saturday in Bozeman, Montana, around 1,000 people of all ages gathered for a women’s march that ended on the campus of Montana State University. The crowd heard from a line up of speakers.  The youngest to deliver remarks was 14-year-old Florence Doyle. We wanted to share her words with you.  —MoJo eds
By Florence Doyle
Hinne baape itchik (It’s a good day.)
Good Afternoon! My name is Baachiime iiwachelesh. My English name is Florence Doyle. I’m an enrolled member of the Crow Tribe and a freshman at Bozeman High School.
I’d like to welcome you to my homeland, shared by Montana’s 13 sovereign tribal nations.
As this continent’s original people, Native Americans have been the surveyors of change for more than 12,500 years.
For 12,500 years we have fed, clothed, and educated immigrants for survival and success. We have preserved respect for families and children in our cultural foundations. We resonate with the trauma inflicted on families when bonds between parents and children are forcibly broken. We use our voices and our values to say this is wrong because our Creator blessed us with a Protector’s heart.
For 12,500 years we have stewarded the land we share. What you have come to love as your public lands today, Native people stewarded for centuries. Even with original populations that rivaled the masses in Europe, we squandered neither our water, nor our lands.
No other group has put their lives on the line more bravely for a patch of dirt or a puddle of water to remain unmolested, so that we can all share in the wellness it offers. And don’t think it happened just once at Standing Rock. Truly, it has happened over and over and over, with pics and shovels; guns, germs, and steel; paper and pen. We keep standing up for our lands, the ones we share with you, because we have a Protector’s heart. 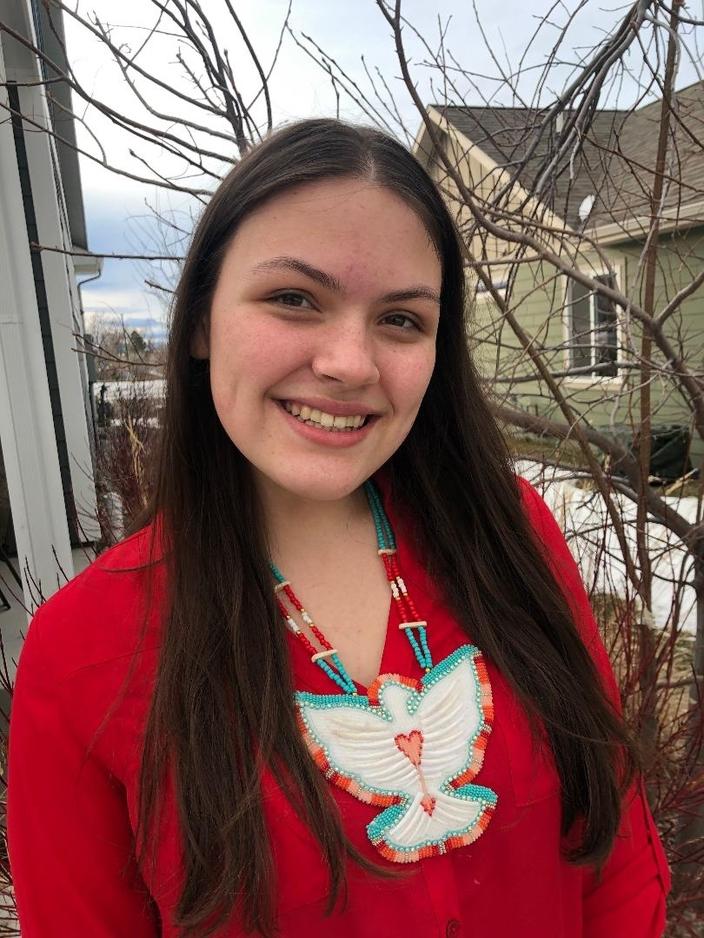 Florence Doyle
For 12,500 years we have generated and maintained democracy. We believe in the sovereignty of people and the natural world and we built these foundational beliefs into social patterns that would one day secure the rights we have today in the United States Constitution. Our belief in sovereignty compels us to respect human dignity and agency. Dictatorships were not endorsed in our past, nor are they today. We maintain and assert that the Creator made each creation worthy in its own right, because we were given a Protector’s heart.
For 12,500 years Native American women have been investing in a legacy of courage, compassion, and competence. Today I want to encourage all of us young ladies. There’s a lot of depression and discouragement out there.
A million times a day, we feel like we don’t measure up, but there is one sure way to rise up against that lie—we do our best with what’s in front of us, proud of who we were created to be.

A million times a day, we feel like we don’t measure up, but there is one sure way to rise up against that lie—we do our best with what’s in front of us, proud of who we were created to be.

Marita Growing Thunder, from Polson, MT has sewn more than 170 ribbon skirts, each in honor of an American Indian woman who is missing or murdered. She organized the annual Save our Sisters 80-mile walk to bring awareness to the fact that for every one woman murdered in this nation, 10 Native American women lie dead.
Something is very wrong when one woman is lost. Something is deeply wrong when there are 10. How do we rise up against wrongs that are so wrong? We do our best with what we have been given. Marita carries a sign for all of us. It shouts, “I belong here.”
After 30 attempted suicides among friends in one summer, Jasilyn Charger dedicated herself to launching the One Mind Youth Movement. Working to address the crisis of trauma Native youth have inherited, they believed they would also inherit an Environmental crisis, so they directed their action at the Dakota Access Pipeline threatening their homes.
What began as an action to protect friends from suicide, turned into a national movement to protect land and water for everyone. Many of us are familiar with the NoDAPL movement, but few realize it was launched by a small group of grieving teens. The One Mind Youth Movement established the first prayer camp just off the pipeline access route that would soon become the Sacred Stone camp at Standing Rock, the global symbol of unity and non-violent protest against big wrongs.

What began as an action to protect friends from suicide, turned into a national movement to protect land and water for everyone. Many of us are familiar with the NoDAPL movement, but few realize it was launched by a small group of grieving teens.

Alyssa Gets Down had friends who couldn’t afford dresses for prom, so she lent out the two extra she had. It wasn’t enough to meet the need and she wouldn’t settle for the thought that life is tough and some girls just don’t get to go. She put out a call and organized the donations of those who responded. An event that was only for some girls became a night of beauty for every girl.
These ladies show us that great things can start small—one skirt, one mile, one prayer, one dress. That’s something each of us can do. Even if what we do doesn’t turn into a world-wide movement, we’ve had the opportunity to practice compassion and courage with competence—the virtues of strong Native women that grow the heart of a protector.
Being a Protector means stepping up and taking care of our relationships: with the environment; between men, women, and children; with our families and friends; with our neighbors and our communities; with humanity. 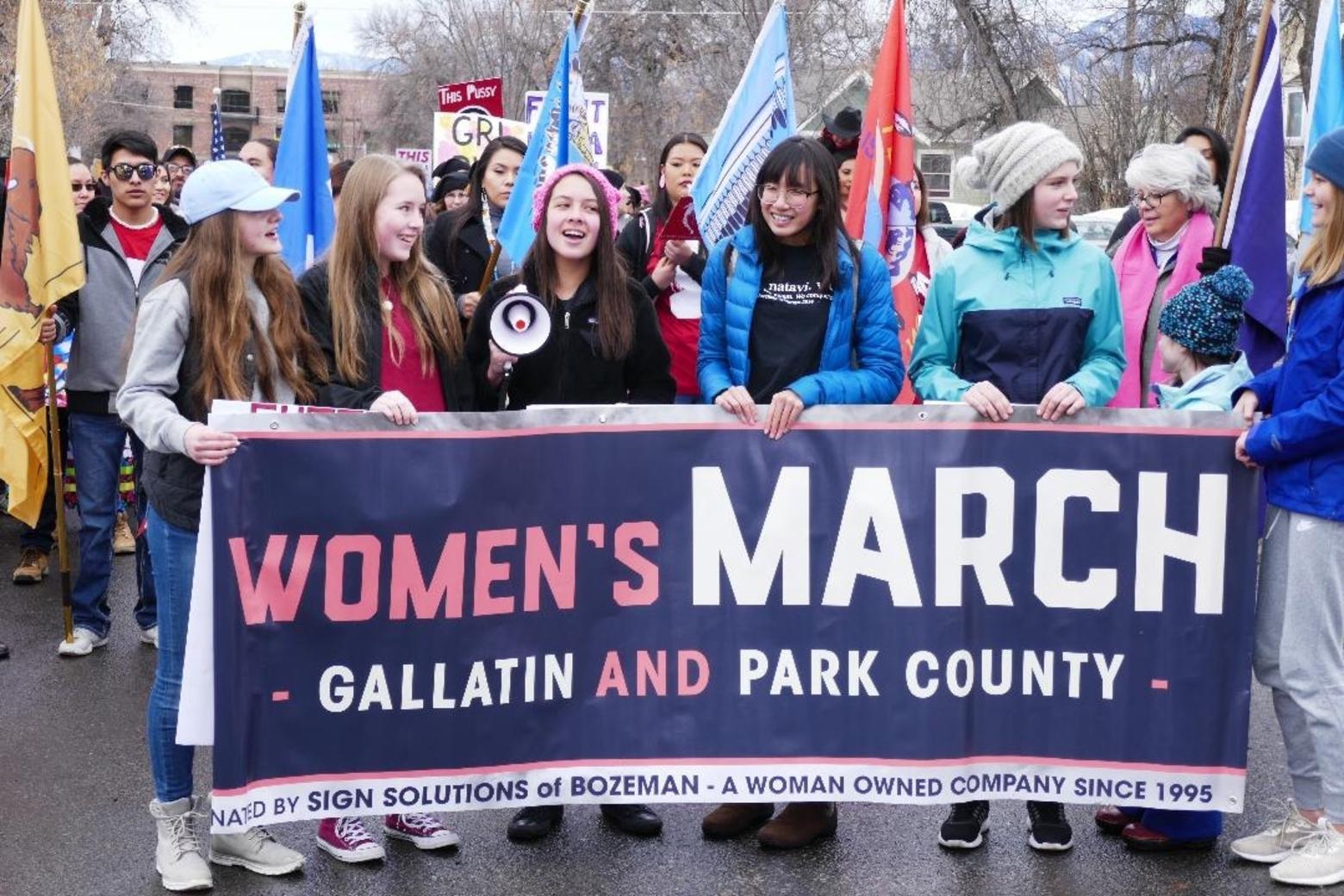 The women's march in Bozeman brought together more than 1,000 people from across southwest Montana. Photo by Tim Crawford
Today I want to encourage all the young women here, including myself, let’s be on the lookout. Let’s guard our minds and ignite our ambition. Let’s be careful we don’t end up just watching videos about what other young women warriors do.
Let’s take up our Protector’s hearts and become the girls other people make videos, and podcasts, and social media posts about. Let’s make our own DIYs with real solutions to real problems. Most importantly, let’s find what matters in our world and protect it.
Aho. 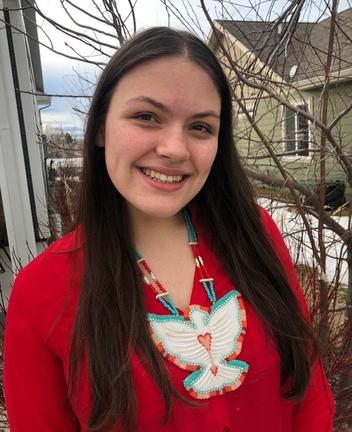 Florence Doyle is a 14-year-old freshman at Bozeman High School. She is a member of the Crow (Apsaalooké) tribe. Florence began public speaking in the 6th grade taking first place in the Gallatin County declamation contest two years in a row for her essays on philanthropy and the Social Security Act. Her passions right now are languages and theatre. She volunteers as a tutor for ESL students and loves theater, ranging from classical works like Shakespeare to more contemporary musical theater. She will perform the role of Polonius in the Ellen Theatre’s production of Hamlet on January 26 & 27, 2019