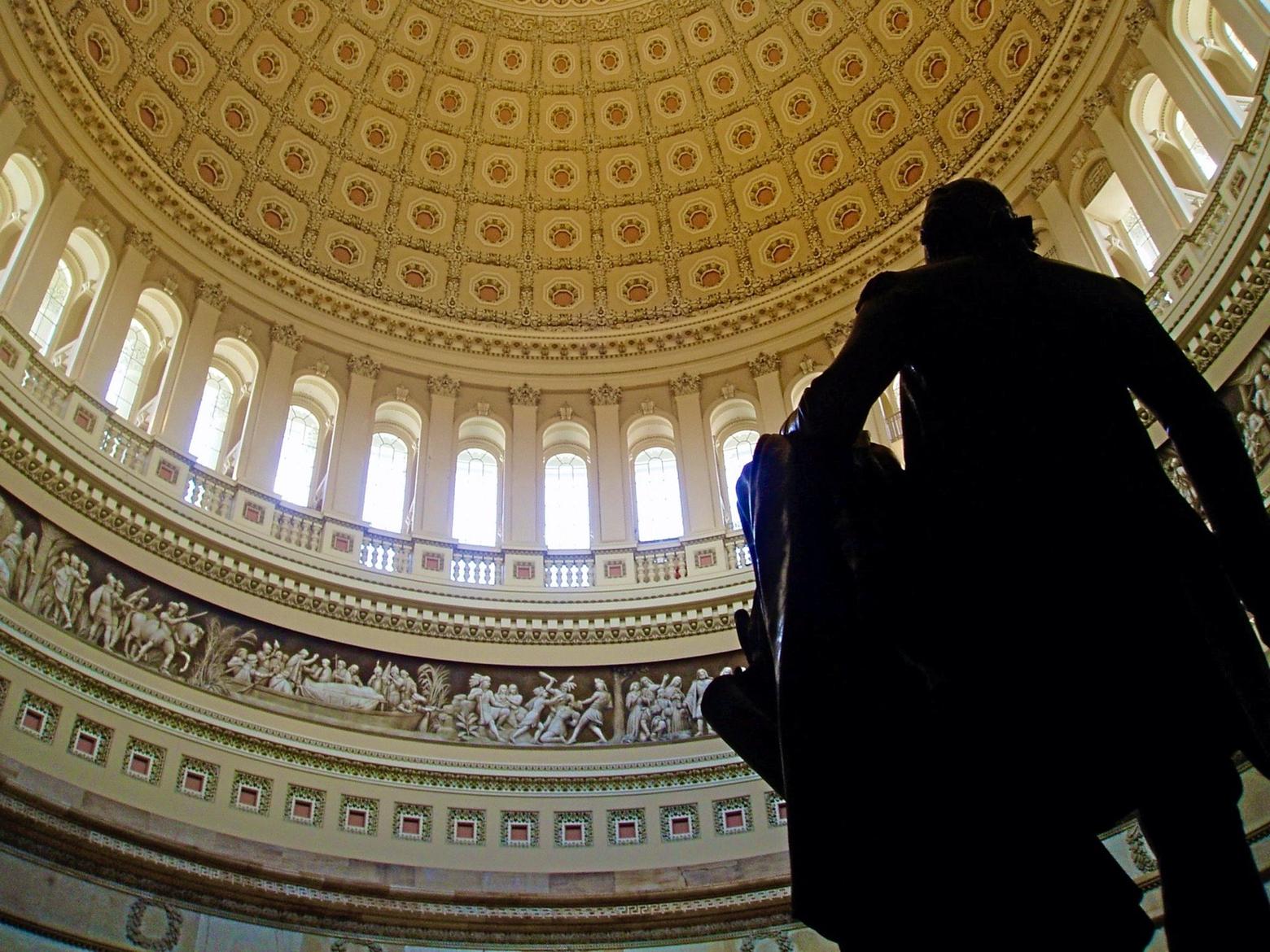 A statue of George Washington rises into the space beneath the dome of the Capitol Rotunda. Photo courtesy Wikipedia/US Capitol
By Todd Wilkinson
The first time I gawked upward from the floor of the US Capitol Rotunda, toward beams of light pouring in through its dome, experiencing sensations of awe that were also present upon visits to the Sistine Chapel, Cathedral of Notre Dame and Westminster Abbey, I had the fortune of being led around by a wise personal tour guide.
My chaperone, as tall as a professional basketball player, spoke quietly out of reverence. He gestured with long arms, describing in detail the history of Americans memorialized in the Capitol statuary and narratives of priceless paintings chronicling the birth of a country. He also ticked off a list of those who had walked the cavernous hallowed halls connecting both houses of Congress.
Steeped in knowledge, he held forth with giddy delight and solemn regard for those who had lain in state.
For him it was an honor and a sacred privilege to not only be learned about the place where he worked and carried out the nation’s business; the spirit of the Capitol lived in his heart as a place that he believed was inviolate—that no American in his or her right mind would ever dare to dishonor by acting like drunken hooligans driven to commit atrocity. 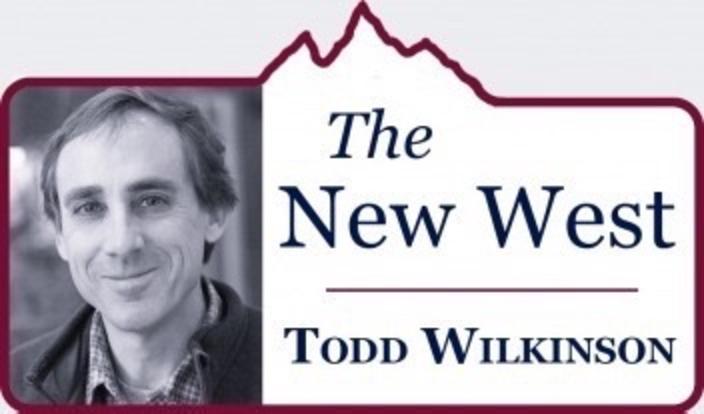 The guide on that day exactly 30 years ago this winter was US Sen. Alan K. Simpson of Wyoming, who then was Minority Whip of the Republican Party—elected by his peers to be second in command— serving in the most powerful legislative body in the world. Up Pennsylvania Avenue in The White House was a president and first lady who considered Al and Ann Simpson dearest of friends. So close were the senator and George H. W. Bush that the former was asked by the latter to one day deliver his eulogy when and if the time came.
“I’ve learned that whenever you prepare a eulogy, cry when you write it, because then you won’t when you deliver it. Get the tears out so you don’t do it in church,” Simpson said. “My writing of it [Bush's send off] had a long gestation period. I ran the words by Ann right on the morning I gave it.”
It was at President Bush’s funeral in December 2018 that Simpson shared a kind of proverb once told to him by his mother and seemingly perfectly suited for these times. “Hate,” Simpson said, speaking of toxic partisanship and cultural tribalism, “corrodes the container it is carried in.”
Is America now writing her own eulogy?
I didn’t know what Sen. Simpson was thinking when, while at home in Cody, Wyoming last week, he saw the same images we did on television—of the Capitol being overrun by a mob of invaders abusing the term “patriots.”  As with 9/11, the nation was under attack, this time surreally by Americans with the wacky notion that in order to fix what's wrong they need to destroy it.
The sackers brutally beat a Capitol police officer to death with a fire extinguisher, broke down doors, smashed windows and invaded the House and Senate chambers allegedly carrying zip ties ostensibly to take members of Congress hostage—or worse? Some had Molotov cocktails, others pulled down their pants and squatted, smearing the walls of the citadel of American democracy with their own feces, and others chanted in mass: “Hang Mike Pence." They were angry because Pence wouldn't listen to his superior who demanded he not only break the law, but defy one of this nation's most sacred cruxes—the peaceful transfer of power following a fair and free election.
None of this would have ever happened were it not for a single person who served as a direct or indirect catalyst. That cannot be denied.
As I said, I wondered what Simpson had made of the unprecedented act of extremism. “What did I feel?” he said after I called him at his home in Cody. “Sadness, deep innate sadness.”
Simpson’s Senate Whip Office was located right off the Rotunda. He has a sense of heartbreak over the officer who was murdered and for another, so traumatized, that he not long after committed suicide. Over the years, Simpson had become friends with Capitol cops who guarded the safety of elected officials and the chefs who cooked meals, and the waiters and the cleaning staff. Senators, when they gathered together in the old Senate dining room and where animosity was checked at the door, perfected living a word—comity—that is today imperiled. And they listened to what working class staff in the Capitol had to say.
“It’s as it is in Wyoming. Nobody is above anybody else. You meet people. You get to know them,” Simpson explained. “You learn about their lives.”
At 89, having served three terms in the US Senate and 12 years in the Wyoming House of Representatives, having made deep friendship with colleagues on both sides of the political aisle, including the late Sens. Ted Kennedy and president-elect Joe Biden with whom he served together on the Senate Judiciary Committee, Simpson describes the paroxysm of Jan. 6, 2021.


“My response is not so much revulsion but thinking of it as terrible, just terrible. There was clammy sadness that something like this could even happen. Members [of Congress] and their staffs hunkered down worried that someone might do them violent harm.”


After Simpson first came to Washington DC in the late 1970s, he was given advice by Sen. Jacob Javits, a Republican from New York. “He said coming from Wyoming you’re somewhat of an insular person but you’re a bright guy with an interesting background so get to know your colleagues and their spouses; travel with them.” Simpson cultivated lasting friendships and if political disagreements over policy or principles arose they didn’t have to become personal or vengeful.


People, he said, don’t want to hurt other people they get to know.


Yes, Simpson is a fiscal conservative who obviously often disagrees with the tactics and rhetoric of the left. 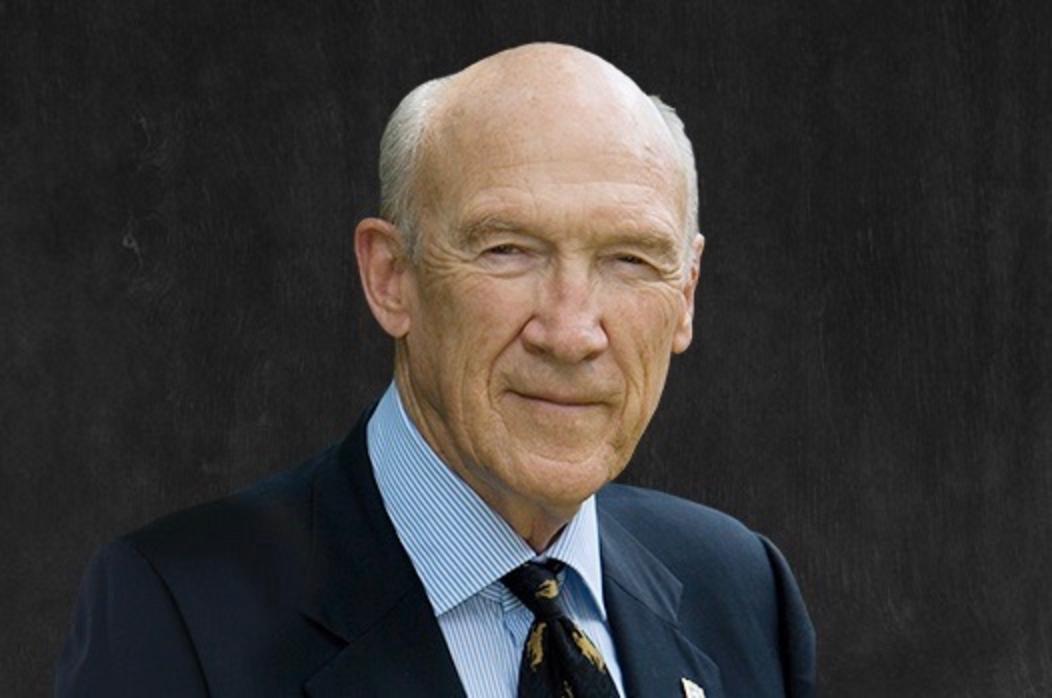 Former Sen. Alan Simpson
But he’s equally dismayed by disintegration of what the GOP used to be. “Part of the Republican Party is heading toward cultism and there are various kinds,” he says. “There’s the homophobe cult, the abortion cult, the conspiracy cult and the no-mask cult. There’s the follow-law-and-order cult and the get-government-out-of-your-life-and-leave-me-alone-cult. The madness of the event [at the Capitol] should pull anyone out of their quandary.”


Simpson has no tolerance for “insurrectionist” politicians or citizens, no matter what party they belong to and being held to account is essential. Still, the pattern of endless partisan recrimination, he said, needs to end for democracy’s sake.  Many followers of the outgoing president put faith in his promises and have been taken advantage of.


“You have to remember that these people were lied to, over and over again" by a person whom they should have been able to trust, Simpson said. He lauds Sen. Mitt Romney of Utah for saying what those in the Senate and House needed to hear, “The best way we could show respect for the voters who were upset is by telling them the truth. That’s the burden. That’s the duty of leadership.”
Among the truths is that democracy is fragile and sacred, a perpetual work in progress that survives on the good faith that a better future is possible. As was demonstrated at the Capitol, freedom and liberty mean nothing when violence against fellow citizens, who love their country as much as you do, becomes both end and means.
Among the strangest sights of all in the act of sedition carried out at the Capitol was this: Very obviously after some of the protestors crashed the gates and moved into the humbling space of the Rotunda—probably for their first time— they paused, realizing what they were doing was wrongheaded.
Despite hurt feelings that have festered across the aisle for years, societal change starts with individual decisions, including individual elected officials—leaders—setting a better tone. Politicians must have the courage, Simpson added, to stand together before their constituents and beseech them to let their hostilities go. Nothing good will ever come from tearing the country apart, not for one man whom democracy has shown itself to dwarf.