But will conservationists, business community also support limits on other forms of 21st-century resource exploitation to protect ecosystem? 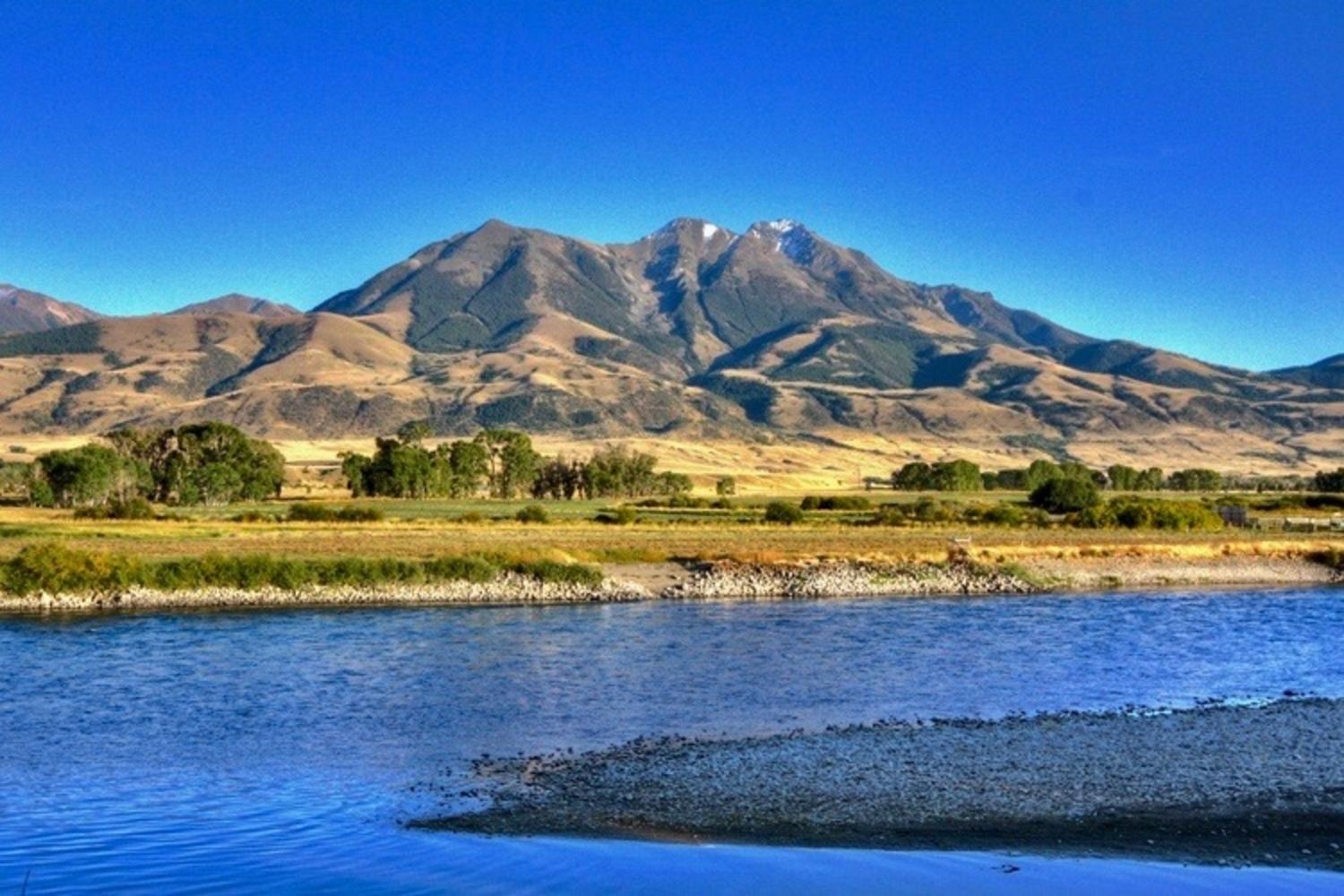 Emigrant Peak rising above the Yellowstone River in Paradise Valley, Montana. A Canadian mining company wants to open a new hard rock mine at the foot of the mountain but, responding to a broad coalition of public opposition, Interior Secretary Ryan Zinke imposed a 20-year ban. Photo courtesy Wikimedia
The late American conservationist David Brower was a friend of mine. He once remarked that “polite conversationalists leave no mark, save the scars upon the Earth that could have been prevented had they stood their ground.”
Ask yourself: are you willing to stand in the breaches, protecting wildness against the  incessant forces that are eroding what remains of an international treasure like the Greater Yellowstone Ecosystem?
This week there is victory to report.
In an action proclaimed by some as “a victory for tourism over mining,” Interior Secretary Ryan Zinke came to Greater Yellowstone. He announced that he was extending by 20 years an Obama Administration ban on proposed hardrock mineral explorations planned to occur near the front doorstep of Yellowstone National Park and along the rim of Montana’s vaunted Paradise Valley.
For the broad array of professional conservationists, business leaders and citizens, Zinke’s announcement brought relief and, to environmental advocates, much deserved praise.
Zinke utilized what the powers of his cabinet position afforded him. Now it remains to be seen if the administrative prohibition can be made permanent through federal legislation brought by all three members of Montana’s congressional delegation in the Senate and House.
The threat of one new mine opening up near Yellowstone’s northern entrance, and another on the backside of Emigrant Peak, a summit in the Absarokas which towers over the Yellowstone River, has been a galvanizing force in a time of incredible partisan division.
An uncommon, diverse group of private interests, led by the Yellowstone Gateway Business Coalition, rallied together for conservation, prompting Zinke, a former Congressman from Montana, to repeat the well-worn cliché that there are some places more valuable than gold.
Indeed, point of fact, the Greater Yellowstone Ecosystem is chock full of irreplaceable natural wonders, for which all the money in the world couldn’t re-create once destroyed.
Notably, no one suggested that the remedy to resolve the clash of values over mining was to promote fuzzy collaboration with the Canadian mining company, Lucky Minerals, hoping to strike pay dirt; instead it was to draw a hard line. 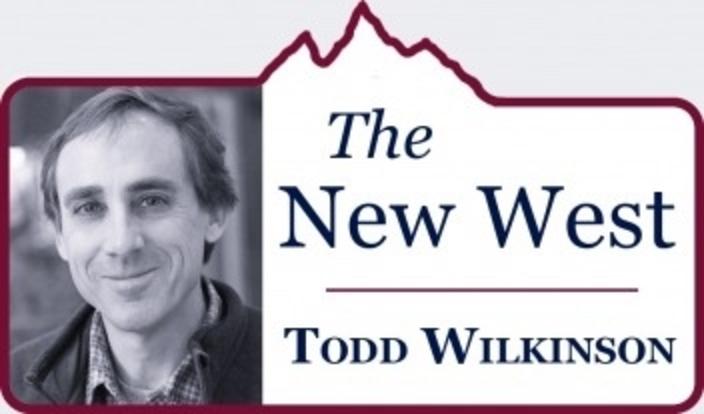 More and more, there are two other clichés being bandied about in Greater Yellowstone besides the one that says “there are some places more valuable than gold.” These pertain to worries about “killing the golden goose that lays the golden egg” and “loving places to death.”
It's easy, frankly, to point fingers at the dreaded foreign mining company; it's harder to look oneself in the mirror, deny the tendency to be Narcissus, and say there are things central to my personal self-interest and lifestyle that I am willing to have a little less of—be it profit or fun—in order to insure a favorite place remains wild and healthy.
Almost no one I’ve met in Greater Yellowstone fails to understand what’s at stake as corners of our region—which holds the most iconic complex of wildlands in the Lower 48—come under rapid inundation by more permanent residents, expanding development, millions of visitors and crushing levels of use.
One example: the Madison River. The Madison is born in Yellowstone Park and flows on a generally northwesterly course, eventually converging with the Gallatin and Jefferson rivers to create the Missouri River.
The Madison is among an almost holy triumvirate of cold-water trout streams and it has been a lucrative hub for water-related tourism.
As a working river recreationally speaking, the Madison racks up tons of angler days by floaters and waders. And, in recent years, a stretch managed by the BLM west of Bozeman has come under exploding levels of traffic from inner tubers whose use has risen to industrial strength.
On some hot summer days, flotillas convey the look and feel of a commercial water park. Upstream, meanwhile, the number of angling days—and pressure on the fishery— has undergone its own form of eruption.
Who could argue with human beings enjoying, using and profiting from a natural resource?
In my three decades of reporting, I’ve never seen a commercial tourism purveyor voluntarily agree to limit numbers of potential clients. The Montana Department of Fish Wildlife and Parks says that in 2017 there were 179,000 angling days on the Madison (up from 88,000 in 2014 or 15 percent annually) and the trend is upward. Commercial use increased 72 percent in less than a decade.
In 2012, responded to growing complaints from the public, Fish Wildlife and Parks conducted an online survey. Crowding on the Madison River was specifically addressed by 306 survey participants, 88 percent of which felt it was a problem. Similarly, crowding at access sites was specifically addressed by 143 participants, 96 percent of which felt it was a problem. Ninety-two respondents specifically addressed commercial use of the Madison River, 86 percent of which felt there was too much commercial use and 74 percent said commercial use should be limited.

In 2016, the state conducted another survey, this one by mail focusing on angler satisfaction in two stretches of the Upper Madison. Data were collected from 1,335 residents of Montana and 1,545 non-residents. To be as comprehensive and non-biased as possible, the survey was sent to a sample of anglers that reported fishing the Madison River drainage from 2001 to 2015 through the Statewide Angler Surveys. "The most striking data indicates that 54 percent of residents and 30 percent of non-residents feel that the number of float users from Lyons Bridge to Ennis Lake is either 'Very Unacceptable' or 'Unacceptable,'" authors of the report wrote.
The report added that the reach from Quake Lake to Lyons Bridge has nearly doubled in outfitter use since 2013 while the reach from Ennis to Ennis Lake has increased by over 350 percent. "Moreover, most commercial trips in these reaches use a vessel or float tube to gain access. Using vessels or float tubes to gain access for fishing in these reaches, not just by outfitters, is a major source of contention for wading anglers, which is evidenced both by consistent volunteered public comments and through angler satisfaction surveys."
The state has serious concerns about impacts to the Madison's famous wild trout fishery. "Though there are no obvious trends in proportion of angler days, either non-resident or resident, the total number of out of state angler days has increased significantly,"  authors said in the report. "To date, fish populations have remained relatively stable despite the significant increase in river use. However, FWP has concerns that increased use may reach a level that negatively impacts fish populations, especially during warm summer months."
When Fish Wildlife and Parks proposed caps on the number of commercial users, protests were immediately registered by professional fishing guides.
Meanwhile, the river is also experiencing heavy camping use. Between Memorial and Labor days in 2017, more than 820,000 group recreation visits were recorded to sites along the Madison-Missouri rivers between Hebgen Lake and Great Falls, Montana, according to the Bureau of Land Management. Of that, 46 percent were notched in the Greater Yellowstone portion between Hebgen and the lower Madison below Three Forks.  The upper and lower Madison River accounted for 77 percent of 377,000 group visits.
Trying to get a handle on skyrocketing use levels, Montana Fish Wildlife and Parks moved forward with an environmental assessment. "Degradation of the Madison River’s recreational values is the catalyst for the development of an EA," the state says. "Madison River user comments indicate that crowding at access sites and on the Madison River have led to unacceptable levels of social conflict and have greatly diminished the quality of recreation on the Madison River."
Are the same conservation groups and business entities that valiantly fought the mines on Yellowstone's doorstep and in Paradise Valley in defense of the Yellowstone River weighing in on these issues? If not, why?

Floaters take to the Madison River west of Bozeman in late morning on a summer's day. By afternoon, this scene would hold four times the number of recreationists seeking to cool off. And be repeated for weeks. Photo by Todd Wilkinson
As with the protracted, contentious battle over controlling the number of snowmobiles in Yellowstone Park following years of largely unregulated tourism, even harmful recreation use levels and impacts, once established, are enormously difficult to reverse.
Many wildlife officials I know say there needs to be an honest discussion—which currently isn’t happening—about all public land recreation or the very qualitative things we love about nature in this region—most prominently, the abundant wildlife—are going to be overrun and lost. It’s already happening.
This isn’t mere assertion; the impacts of unbridled recreation have been demonstrated over and over again in other parts of the country where wildness as we savor it here has been eroded.
So yes, it’s momentous to stop proposed hardrock mines enormously unpopular with the public, but the true test of courage is politicians, business people, citizens, advocates and users agreeing to embrace limits on our own desires for the good of the resource.
Are we capable of doing that, or is 21stcentury industrial-strength tourism no different than 19thcentury industrial-strength mining—in the name of jobs, commerce (and our own fun) we are blind to the impacts of exploitation and leaving the character of the landscape depleted in our wake?
To quote Brower again, who noted the need for tireless, endless, self-scrutinizing vigilance in safeguarding the environment: “our victories are temporary and our losses permanent.”