Let's Not Denude 'The Valley Of Flowers'

Timothy Tate asks: is it possible for mountain towns to grow without losing their soul? 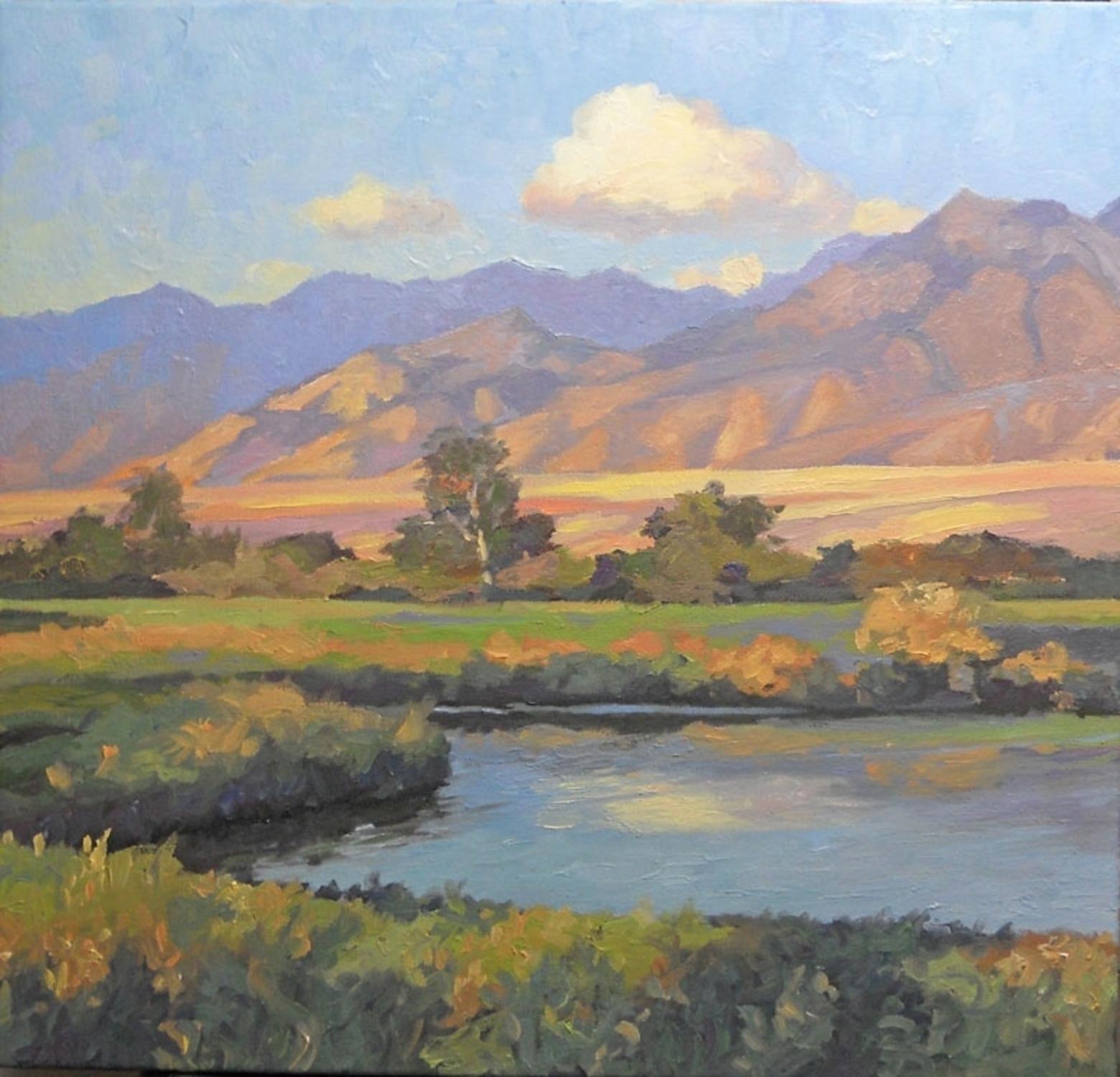 "Bridger Mountains—Summer" by painter Bruce Park (https://www.bruceparkarts.com). Native people knew the area stretching west of present-day Bozeman as the "Valley of Flowers".
Each of us has their own “Valley of the Flowers” origin story.
Valley of the Flowers, to the uninitiated, is the term that some indigenous people used to describe the Gallatin Valley in Montana which, in addition to sparkling with native botanic panache, was home to wild bison herds. Reverence for the latter, historians say, is what led to an agreement between ancient tribal enemies to put their weapons of war aside while hunting for sustenance and leave mortal conflict for another day.
For more modern arrivees, Valley of the Flowers still holds allure for those looking out a window seat on a direct airplane flight from Minneapolis, Chicago, Seattle or Atlanta.
Or maybe one catches a glimpse of it while driving north on US Highway 191 wending through the Gallatin Canyon and spying a first take on the distant Bridger Mountains shimmering in the close-in distance. Of course, Valley of the Flowers is also a metaphor that could be applied to Jackson Hole, Teton Valley, Idaho, the Bighorn Basin, the Yellowstone River corridor between Livingston and Yellowstone or any other vale in our region.
Some come to us in Bozeman from the west having driven at a high rate of speed on US I-90 through the curves around the Horseshoe Hills spilling out over the Jefferson River’s placid presence. In my case, we arrived, my wife and I, with our daughter bundled up against a winter’s unforgiving deep freeze. Even then, we sensed the special magic of the valley as we drove from the hospital to our home post birth, convinced that this is where we belong. Native, local or newcomer, we all seek wonder.
Change, however, can be difficult to embrace no matter what form it takes. I am constantly having discussions with people trying to make sense and meaning of change; some of their stresses are related to changes occurring in the landscape around them, leaving them feeling unsettled.
I am reminded of a teaching story Alan Watts used to tell about a boy and a baby chick. The boy wanted to hold and cuddle the downy yellow bundle, pestering his folks long and hard enough, that they relented and took him to buy a young freshly-hatched bird. It could have been at Murdoch’s Ranch Supply last Easter.
After purchasing the chick, parents and child load up in their Suburban, adults in front and he in the back seat cupping the chick in his hands; so warm, so delighted. He held the avian a bit too tightly, so wanting to experience its life, feeling its heartbeat. The baby chick suffocated from the over enthusiastic clutch of the exuberant child.
Can we love a place to death? Can we want what it has to offer in all its abundant glory that we squeeze life out of its wonder? And if so, what is the role of community in safeguarding the life force of our towns no matter where significant change is happening. It used to be that when one place filled up, you could find an earlier iteration of what you loved in another town.
Not so much anymore. Residents of Jackson Hole have fled to Bozeman or Idaho; Bozemaneans ponder exits to Lewistown or Dillon. And yet, at the same time, rural sparsely populated areas are emptying out as elders cope with the heartache of losing their young people to cities where many more stay there than return.
Recent essays by my fellow Mountain Journal columnists Lori Ryker, Todd Wilkinson and Tim Crawford highlight the challenges we face as Gallatin Valley and its hub, Bozeman, grow at a breakneck pace.
I wish here to attend to another dimension of our community’s health and wellbeing: it is the sense of otherness. The degree to which I experience people in our town as “other” is the extent to which I am myself alienated, disturbed, and annoyed by my own hometown’s vibe.
I could rant about how, on a daily basis, I am pushed by aggressive drivers or how the crosswalks on Main Street are more like target zones, not safe ones. But I remember when a talented young woman, her bright future ahead of her, was crossing Main Street back in the late 1990s. She was sent airborne by a speeding motorist (I cannot rid my memory of that thump sound nor the expletives she screamed). In other communities like Jackson Hole, there is a natural world parallel—that of a rising roadkill count involving wildlife finding it difficult to move through that remarkable valley.
What it represents to me is a metaphor, and the metaphor is that we are not paying attention as the blinding speed of things picks up.
What we are experiencing now is less random and more chaotic, crowded, and impersonal. This impersonal quality is what I mean by the “other.”
Communities are built upon human connections and holding them together is the glue of common values.
Take, for example, this shared moment, which occurred at Western Drug in the Heebs grocery store as a way of understanding the other.
I went to fulfill a prescription. I have known the pharmacist on a facial recognition basis for 30 years going back to when Western Drug was its own business and located where the downtown Community Food Co-op now operates. (How many of you remember when the co-op was located on College Street?)
The pharmacist knows me and without having to present an ID he pulled my prescription out of a drawer. I noticed a Stihl chainsaw on the floor behind him. I had the same Stihl 028 model for decades so I was drawn to share my delight with him about how “old school” Montana a chainsaw in a pharmacy was to me.
We talked for five minutes about harvesting wood and how many cords he goes through in a winter.  We both heat our houses primarily by wood stoves. He must have a hell of a big house since our 2000 square foot passive solar home is kept toasty by a quarter of the wood he uses.  But when he got to the part of knowing where standing dead fir trees were my ears perked up.
Sociologists call this phenomena of engagement as “familiar stranger.”  You could call it neighborliness and it strikes a contrast to what I mean when I use the term “other.”
We both took the time to engage in a conversation about a common activity and thereby generated a story that binds our lives together in a particular way. This is an example of breaching the barrier of the other and, in downtown Bozeman where I spend my days, such sharing has been an important part of the social fabric. 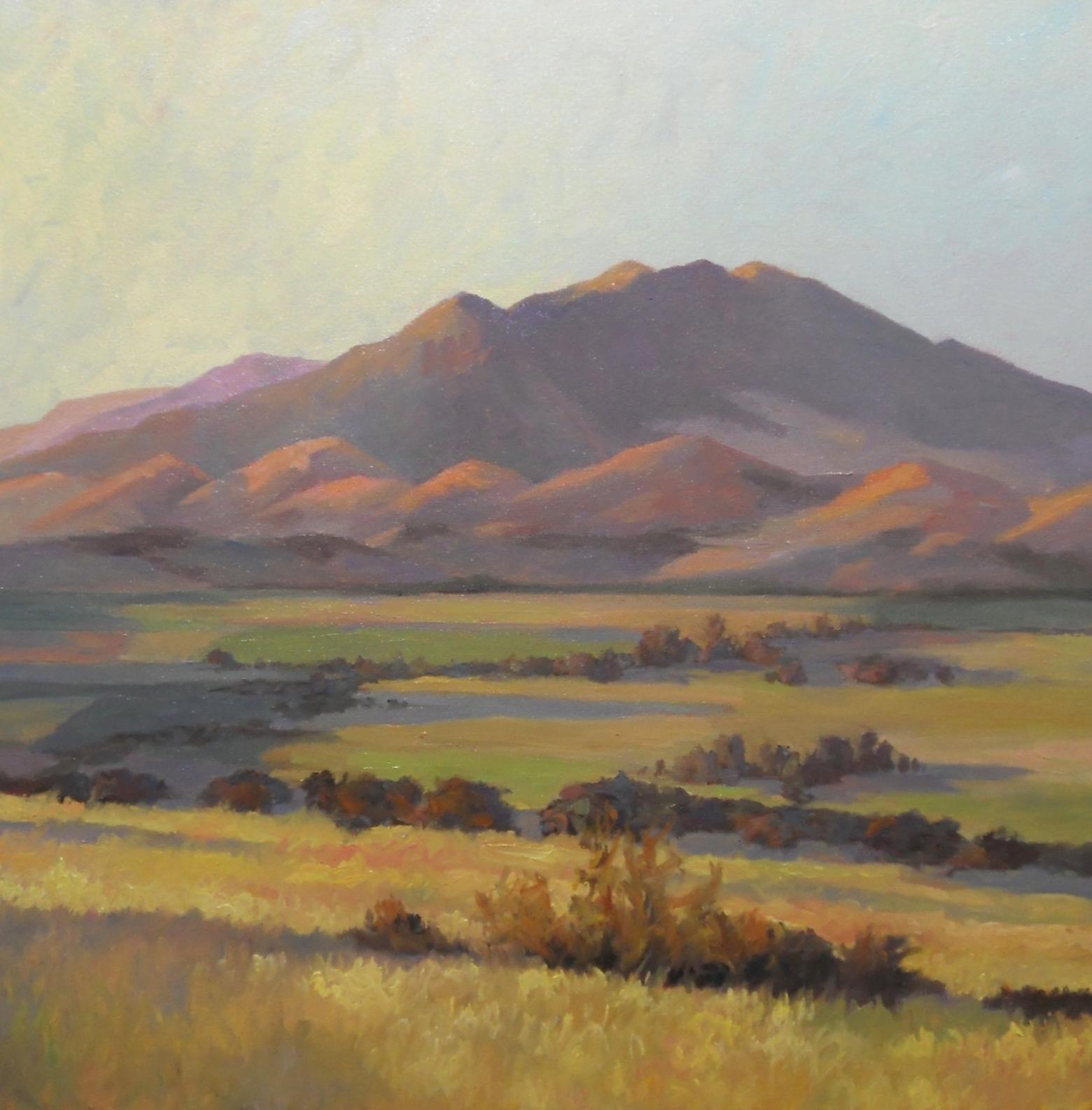 "Bridger Mountains—Story Hills" by Bruce Park (https://www.bruceparkarts.com)
MoJo columnist Tim Crawford, who owns a building downtown, calls it the “Boulevardier” characteristic within us citizens. People who are known to each other, greeted, and easy with conversations create a community web of meaning and relationship. People who take time to listen and converse about life’s mundane details.
There are various measures of a community’s health and certainly not all of them are related to economics. The mental health of the community is vested in our personal and collective ability to transcend the otherness of who we are. Otherwise we become simply what “development” momentum will decree—the sum of real estate deals that may leverage property values but do little to engender a more caring atmosphere for people and place.
We are in that phase now, caught up in an overwhelming surge which involves a tidal wave of virtually anonymous “others” inundating and replacing the sense of community. I can’t tell you how many times I converse with people who say “the old Bozeman is becoming unrecognizable.”
It is clear to me that we are at a tipping point in our town. But let’s cease and desist from the attitude our town is being ruined by the influx of others who are loving our place to death. What purpose does blaming serve?
Good people still hold our town together and it is important that we welcome in people who are committed to doing the same.
Maybe it was my upbringing by socially-conscious parents who believed everyone was equal, no matter their station, or maybe it’s my fascination with the mix and match of “the other” that together creates a vibrant town.
But what if the other does not share such a value and simply wants to muscle in, take over, and use money to make more money at the expense of my quality of life? Is that when I don my Lamont clan kilt, reach for the broadsword and in the tradition of William Wallace seek freedom from economic tyranny at any cost? Man that’s appealing but not very effective.
Rather, let us consider how we are to host the divergence, wealth, agendas, ideas, and building projects flooding the Valley of Flowers. But let’s be clear what this spirit of our town is, that we are not desirous of emulating “other’ places.
I am reminded of clan gatherings in Ireland and Scotland where the regional chieftains would come together, sheathing their weapons on an annual basis to hold a council of leaders to take the pulse of the health of the land and people.
We know who the chieftains are in our valley.
Since they are not taking the lead, what if Mountain Journal was to host an annual gathering to discuss the health of our valley or ecosystem? It would be a pathway to achieving the unthinkable, which is moving forward without losing our soul.
What if, together, we clearly delineated that our values are reflected in our care of landscape and that, if we conform it is to the obvious recognition that individual ambitions must have limits—that growth and change without any meaningful reflection on impacts is irresponsible.
If we do not come to a creative all-inclusive discussion, we can kiss our sweet Gallatin Valley and everything we love about it goodbye. That is different from loving a place to death which is the result of apathy. Citizens step up to protect the things they love and prevent them from incurring harm.  The only kind of “other” worthy of scorn is the individual who denies this exists.