Robert Aland, a tax attorney from Chicago, credits bears with turning him into a citizen advocate for nature—as he believes all residents, even part-timers, should be 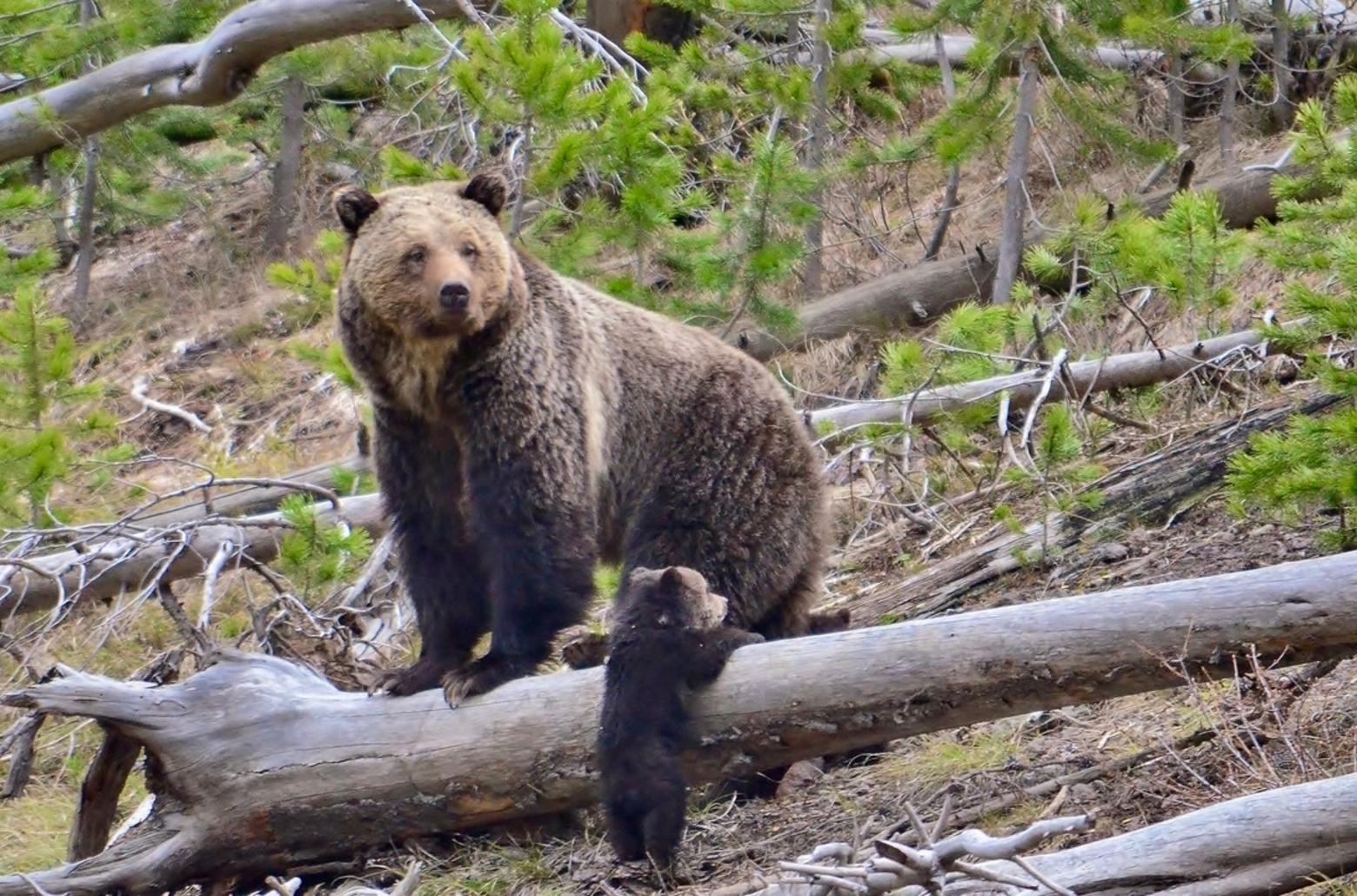 A grizzly mother with cub in the Greater Yellowstone Ecosystem. Photo courtesy Frank van Manen/USGS
There are, arguably, many different kinds of part-time Greater Yellowstoneans who either own vacation homes here or visit often in order to relax and play.
There are those who simply want to escape to a wild West version of Disneyland. They arrive to get away from somewhere else, having little interest in fraternizing with the locals, paying no heed to what’s going on in our region day to day and may view their time in the Northern Rockies as a one-way relationship—as in: “What can I experientially take from the ecosystem, to serve my own immediately desires, without being burdened by considering how I might possibly give back?”
There are others who may interpret the region as being a province of quaint rural bumpkins. These visitors may contribute to local community causes such as the arts, a hospital or food banks but they may have no understanding of how important conservation has been in protecting the things they savor. Many fail to grasp how Greater Yellowstone is qualitatively different from any other landscape in the country.
And then there are those who educate themselves, who proudly possess a level of ecological literacy in understanding how Greater Yellowstone is, from a wildlife perspective, one of the most remarkable bioregions left on the planet.
These people (politically they may identify as left or right) get involved in conservation. They embrace the ethos of being net givers rather than takers, and they don’t flinch if identifying as tree huggers gets them criticized in certain circles.
Robert Aland fits into the latter. Aland is a veteran tax attorney from Chicago, who had a long practice before he retired and he still reaches tax law as an adjunct professor at the Northwestern University School of Law.
He knows the importance of balancing ledgers and has a keen ability to recognize when numbers don’t add up. Aland and his wife are passionately devoted to advancing the cause of conservation for an animal that is the quintessential emblem of wildness in Greater Yellowstone: the grizzly bear.
The Alands reside part-time in Wilson, Wyoming and have been coming to Jackson Hole since the 1970s. Back then, grizzlies had been largely killed off in Teton County by hunters, ranchers, outfitters and poachers. 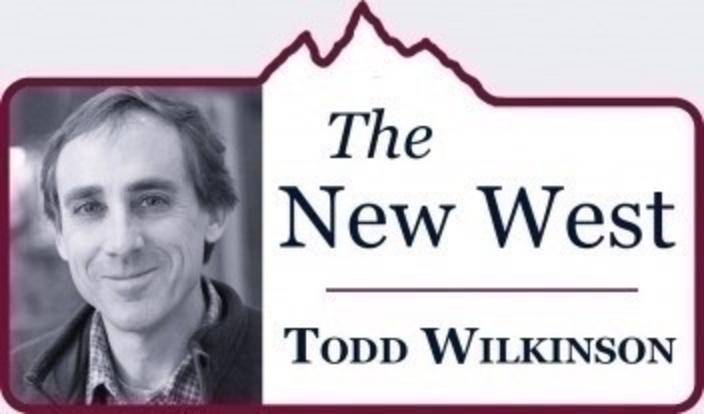 Recently, he as an individual plaintiff joined a wide range of conservation groups, indigenous tribes, elders and others in suing the US Fish and Wildlife Service. In particular, they emerged victorious in a US district court ruling in Montana (a ruling upheld July 8 by the US Ninth Circuit Court of Appeals) that overturned the Fish and Service’s decision to remove Greater Yellowstone’s grizzly population from federal protection.
Inciting national outrage, what the Fish and Wildlife Service’s action did, in removing grizzlies from federal protection under the Endangered Species Act, resulted in the states briefly taking over bear management and, in the case of Wyoming, moving quickly to monetize bears by selling licenses to shoot 23 of them.
I asked Mr. Aland, who just turned 80, what prompted his involvement in the case personally, volunteering his time as an attorney? “Since I was a small child, I have been disgusted with the treatment of wildlife by humans.  When my father took me to the Ringling Brothers Circus in my home state of Alabama, and I saw lions and tigers walking in circles in small cages or being tormented for public enjoyment and elephants walking single file with trunks grasping tails, I asked my father to take me home,” he said.
Aland added, “I believe trophy hunting is particularly disgusting.  It is not a sport.  A true sport involves two or more competitors, equally equipped, playing by the same rules—let the best competitor win.  Sneaking up on an unsuspecting animal with a powerful weapon and killing it for fun, profit or personal validation is not a sport. This brings me to grizzly bears in the Lower 48, which were nearly exterminated by the time they were given protection in 1975 under the Endangered Species Act.”
Aland, who says there's no retirement age in being a conservationist, sees himself as being a kind of “defense attorney for bears that cannot speak for themselves.” He admires the non-profit law firm EarthJustice and its staff in the Bozeman office led by senior litigator Tim Preso (who earlier in his life was a journalist).
Two summers ago, Aland and other plaintiffs prevailed in convincing US District Court Judge Dana L. Christensen to halt Wyoming’s and Idaho’s plans to stage their first sport hunts of grizzlies in 44 years.
Aland is incredulous that after decades of Americans rallying to save grizzlies in Greater Yellowstone, increasing the number of bruins in the vast region from around 140 to about 720, Wyoming wanted to offer nearly two dozen up for hunters.
“The bottom line, consistent with my feeling about wildlife since childhood, is that I want these bears to be protected and preserved forever,” Aland said. “I want the number of bears in the Lower 48 to increase steadily and naturally. I do not want the bears to become decorations on family room floors and walls.” 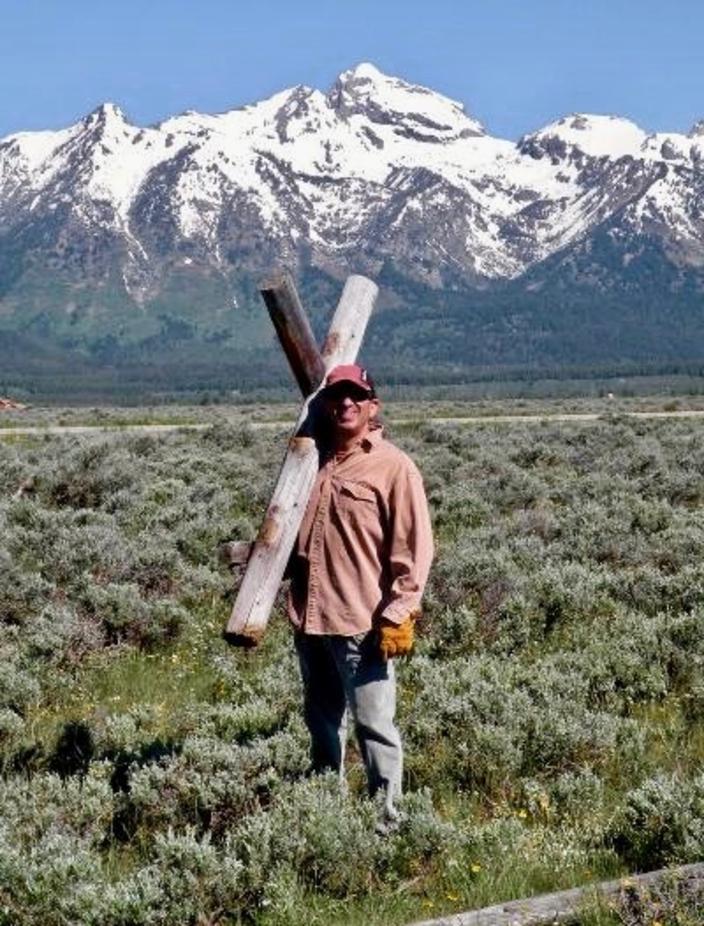 Aland helping to take down fences that represent hazards to wildlife.
Aland understands how visitors to Greater Yellowstone and second home owners might want to enjoy their time here without reflecting on what’s at stake from a conservation standpoint for bears and public lands. But he disagrees with such thinking. They ought to care, he says, because the wildlands of the region belong to them too and as citizens they need to be advocates. When Aland isn’t scrutinizing government documents, working with others to file Freedom of Information Act requests and traveling to hearings, he spends part of his time in Wyoming volunteering for the Jackson Hole Wildlife Foundation in helping landowners take down barbed wire fences that are dangerous obstacles to safe wildlife passage.
Some 15 years ago, Aland admits he didn’t know much about the Endangered Species Act and its purpose. He poured himself into studying the law and has volunteered, by his rough estimate, about 7,000 hours of time to making sure the legal framework for safeguarding bears and other imperiled species remains intact.
In my communication with Aland, who is being careful and sequestering himself in this time of Covid-19, I asked him if he thought the states and federal government fully comprehend how beloved Greater Yellowstone’s population of grizzlies is by the public and what those civil servants need to heed.
“Yes, there is no question that the federal and state governments understand completely how beloved these bears are to the American public. However, the governments arrogantly disregard public opinion due to pressure from politicians, trophy hunters, ranchers and resource exploiters that seek access to the bears’ ‘critical habitat,’” he claims. “Let me give you objective proof.”
Aland notes that when Yellowstone-area bears were first proposed for removal from Endangered Species Act protection in 2005, members of the public submitted 200,000 comments, which was a large number.
According to statistics published contemporaneously by the US Interior Department, over 99 percent of the comments, including 90 percent from residents of Montana, Wyoming and Idaho, opposed delisting.
Nonetheless, Aland says the Interior Department disregarded the expression of overwhelming public sentiment by saying it didn’t have to recognize it, as it wasn’t a formal referendum. Still, he believes that wildlife management ought to reflect the desires of citizens.
Shortly thereafter, a court decision overturned the government’s first bid at delisting but four years ago, the Fish and Wildlife Service and the three states tried again. 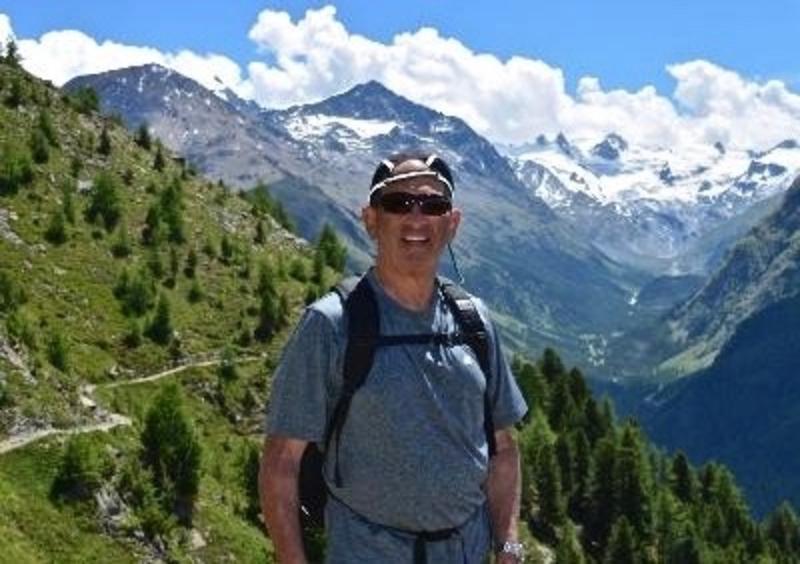 Robert Aland on a hiking trip to Europe. Although it has spectacular scenery, the mountains of "the Old World" don't compare to the wildness that is typified by the animals that still call Greater Yellowstone home and it should be a source for national pride, Aland says
“Fast forward to 2016, when the Interior Department issued its second proposed delisting rule,” Aland says. “This time the public filed about 665,000 comments, an even more astounding number. There is no doubt that the public sentiment against delisting in 2016 was as overwhelming as in 2005, but the Interior Department, under severe political pressure to delist the bears, refused to publish the statistics as it had in 2005.”
Those 665,000 comments represent one of the largest outpourings of citizen involvement on a wildlife issue in US history and he is convinced the overwhelming majority was opposed to delisting and trophy hunting.
When the Ninth Circuit Court ruled in early July of this summer to uphold a lower court decision, that the Fish and Wildlife Service’s justification for delisting was based upon flawed reasoning, including failure to consider critical facts related to future survival of bears, Aland says. He notes the courts correctly considered science and the legal intent of law when it comes to “recovering” a species.
No other wildlife issues in modern times have aroused more public interest than that of Greater Yellowstone grizzlies. Aland believes the federal government has made a mockery of the public involvement process because, on the one hand it solicits citizens, as mandated by law, to become engaged in a significant wildlife conservation decision, and, on the other hand, it dismisses what they have to say.
Aland may reside in Chicago but his heart is in Greater Yellowstone. Grizzlies, he adds, are a national natural treasure “to be conserved, not for the purpose of hunting them.” He knows not everyone agrees with him, especially those who want to stalk a grizzly with the gun, but as a person who pays close attention to numbers, he insists most do.
Where public support for conservation is concerned and where the sentiment of the country is headed, these are expressions by citizens, he says, that ought to count if government is going maintain the trust of the people on wildlife issues.