For the first time ever, CWD has been confirmed in Montana wapiti. How might it affect America's most iconic concentration of big game animals? 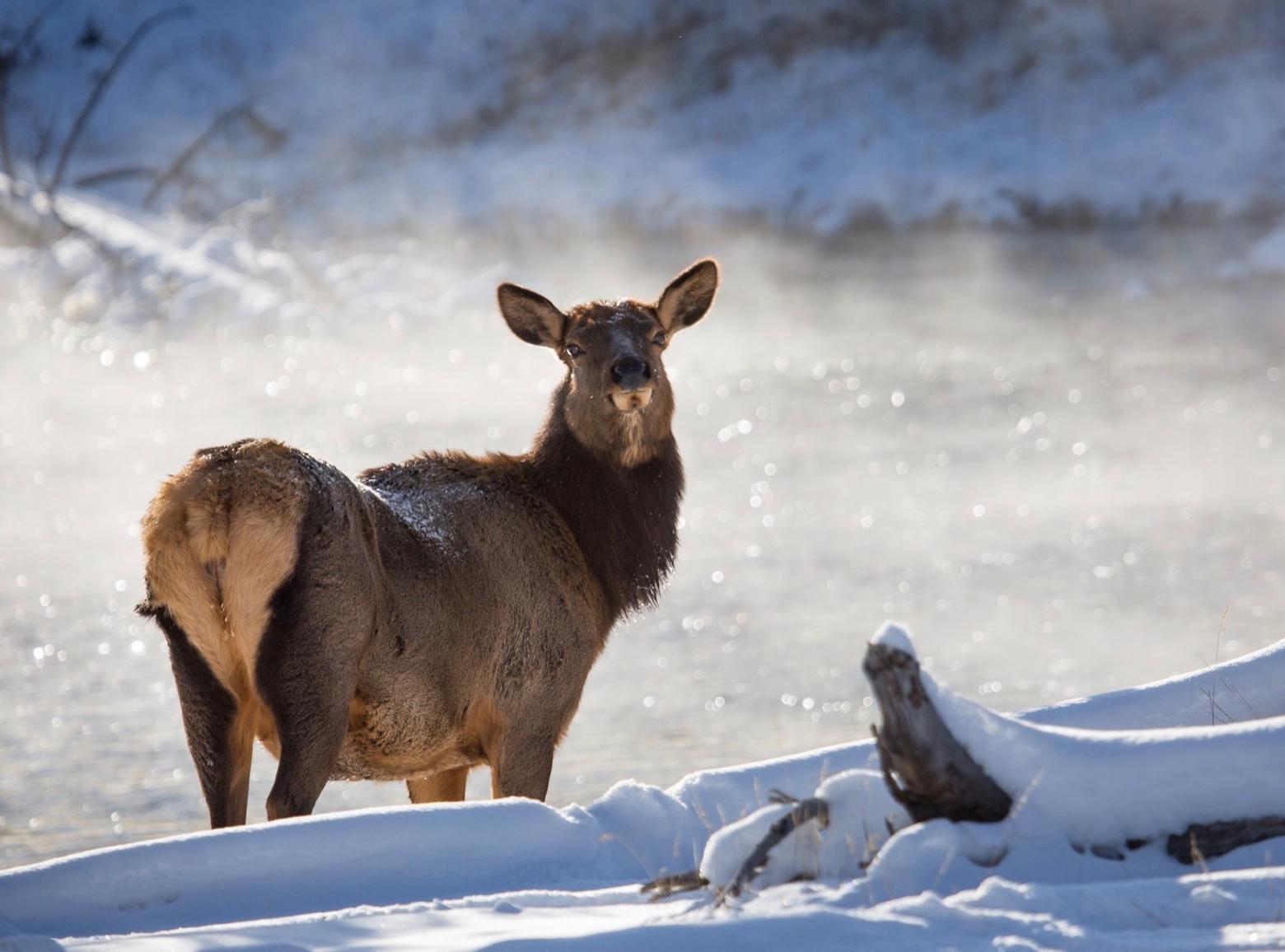 A healthy cow elk in Yellowstone. What will happen to national park's populations of elk, deer and moose if CWD strikes there? Photo courtesy Neal Herbert/NPS
For the first time ever, Chronic Wasting Disease has been confirmed in a wild free-ranging elk in Montana.
A cow wapiti tested positive for the dreaded disease after it was harvested by a hunter on private land near Red Lodge, located along the eastern flanks of the Beartooth mountains in southwest Montana, state wildlife officials said Monday, November 25, 2019.
“This is certainly a bad sign,"  said Jim Posewitz, a retired veteran of the Montana Fish Wildlife and Parks Department, lifelong hunter and noted conservationist.
The confirmation comes two years after the first case of CWD was identified in a deer-family species in Montana—in that instance it was found in a wild mule deer buck taken by a hunter southeast of Bridger, Montana near Billings. Since then dozens of white-tailed and mule deer have tested positive and disease experts knew it was only a matter of time before it reached the region's most iconic big game animal, elk.
News circulated quickly within hunting circles and comes only days after the Montana Fish Wildlife and Parks Department announced that a moose had tested positive for CWD near Troy in the northwest corner of the state. Fish Wildlife and Parks said that in 2018 26 new cases of CWD appeared in wild deer "including 21 cases along the northern border in every county from Liberty County east to the North Dakota border, and five cases within the CWD-positive area south of Billings."
Alarming for hunters and wildlife biologists is that Red Lodge sits inside the northeastern corner of the Greater Yellowstone Ecosystem, which holds the largest concentration of large wild mammals in the Lower 48, including world famous populations of elk. 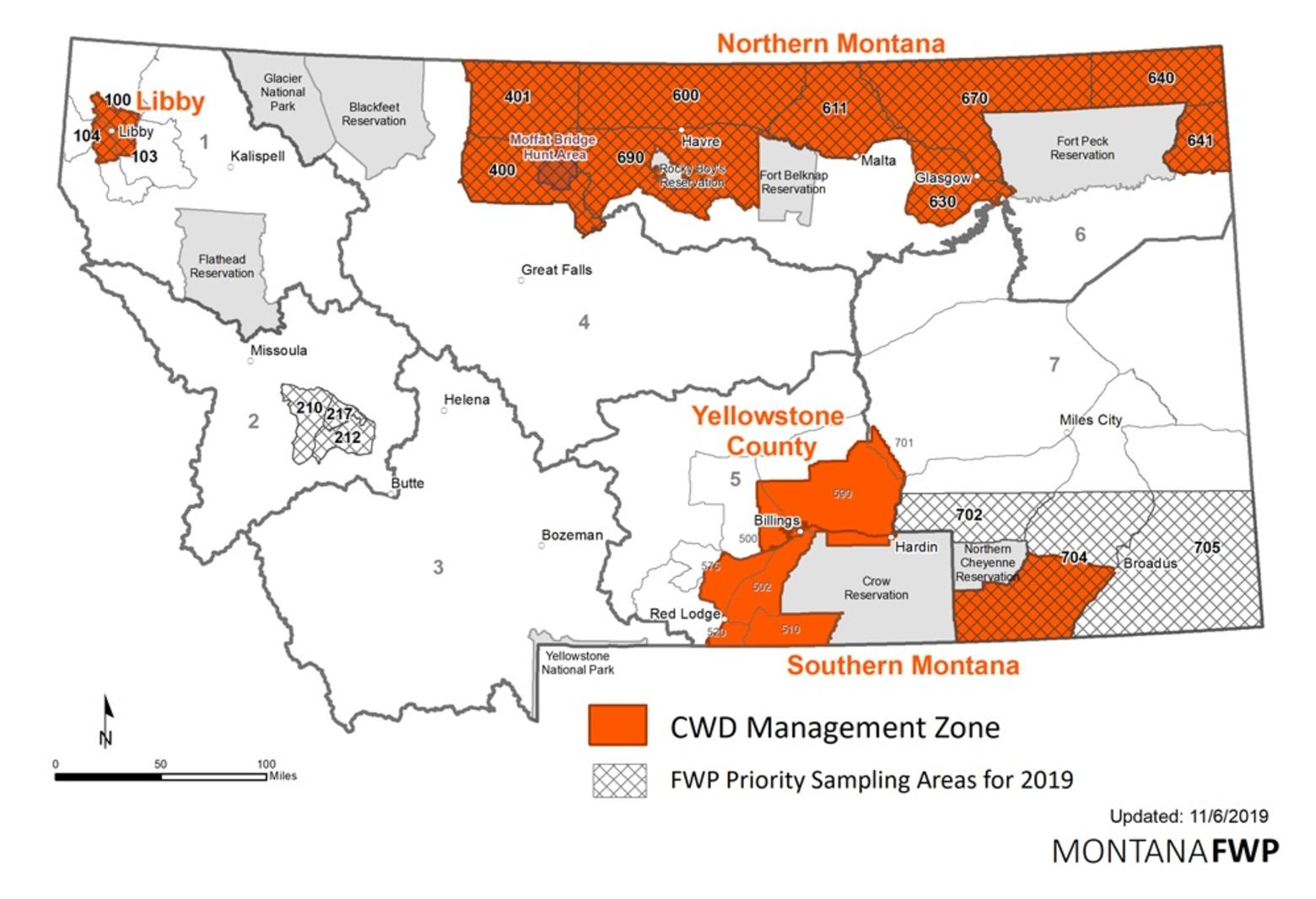 Map courtesy Montana Fish Wildlife and Parks
Tens of thousands of elk—part of more than a dozen different large herds, migrate seasonally in the tri-state area of Montana, Wyoming and Idaho between the high country and lower elevations each year, often mixing while on summer and winter range. The fear is that if CWD takes hold in areas where large numbers of elk congregate, it could quickly spread.
"That infected elk from Red Lodge was not that distant from the elk in Yellowstone Park and they are not distant from the feedgrounds of Jackson Hole,” Posewitz observes. “You’ve got to suspect that the leakage of this disease is coming from Wyoming and the toleration of unnaturally feeding elk not only by the state but the U.S. Interior Department.”
For years, wildlife disease experts have warned and ridiculed Wyoming and the federal government for operating artificial feed programs that congregate thousands of elk around hay and alfalfa pellets every winter. The controversial practice, widely condemned by veterinary epidemiologists and professional wildlife management organizations, happens at the National Elk Refuge in Jackson Hole, Wyoming  and at 22 feedgrounds operated by the state of Wyoming, most of those on federal land administrated by the US Forest Service and Bureau of Land Management.
The National Elk Refuge falls under the management purview of the US Fish and Wildlife Service, a department, like the National Park Service, within the US Interior Department.
Bruce Smith spent 22 years as a senior staff biologist at the National Elk Refuge and warned about the congregating elk was setting up the population for a potentially catastrophic outbreak of disease. He made his case for phasing out the artificial feeding of elk in his critically-acclaimed book, Where Elk Roam: Conservation and Biopolitics of Our National Elk Herd.
Now retired and living in Bozeman, Smith isn't surprised by confirmation that it has reached elk in Montana but he worries about its consequences—not only ecologically with its impact on wildlife but the potential fear it might cause within the hunting community.  Smith told Mountain Journal a few years ago that he wouldn't hunt and eat elk in an area where CWD is known to occur.
CWD is an always-fatal malady that destroys the brain and central nervous system of members of the deer family it afflicts. There is no vaccine.  It is among a family of diseases related to poorly-understood mis-folded proteins known as prions that cause transmissible spongiform encephalopathy or TSE. CWD is a cousin to Mad Cow Disease that infected and killed around 180 people in the United Kingdom.
While there has not yet been a confirmed case of CWD transmission occurring from wildlife to humans who eat contaminated game meat, the federal Centers for Disease Control advises all hunters to get their meat tested, especially if it comes from an area where CWD is known to exist.  Montana this year is inviting every hunter who kills a deer, elk or moose to have it tested with the state picking up the tab.
"This is a disease to be taken seriously. It’s relentless. CWD persists, fueled by nearly indestructible prions. Shed in the saliva, urine, feces and carcasses of infected animals, they accumulate and contaminate the environment. Infected animals survive for months, even years, while shedding the pathogen like Typhoid Mary. There’s no way to 'treat' and no vaccine to prevent CWD," Smith wrote in the Jackson Hole-based publication, Headwaters in September 2019.
"Almost everywhere that CWD exists in cervid populations (25 states and three Canadian provinces), it is spreading and its prevalence is climbing. Witness Wyoming," Smith added. "Every county except Uinta now has infected herds of wild deer. CWD infection rates of mule deer in some areas have reached 25 percent  to 50 percent  with consequent population declines of some herds."
No cases of CWD have been identified in Idaho but disease experts say its arrival there is inevitable.
NOTE: Read some of the stories in Mountain Journal's widely-circulated series on CWD. Links below.
Greater Yellowstone's Coming Plague