Four years later, Tim Crawford wonders how much empathy the new Bozeman has for those that prosperity sent packing 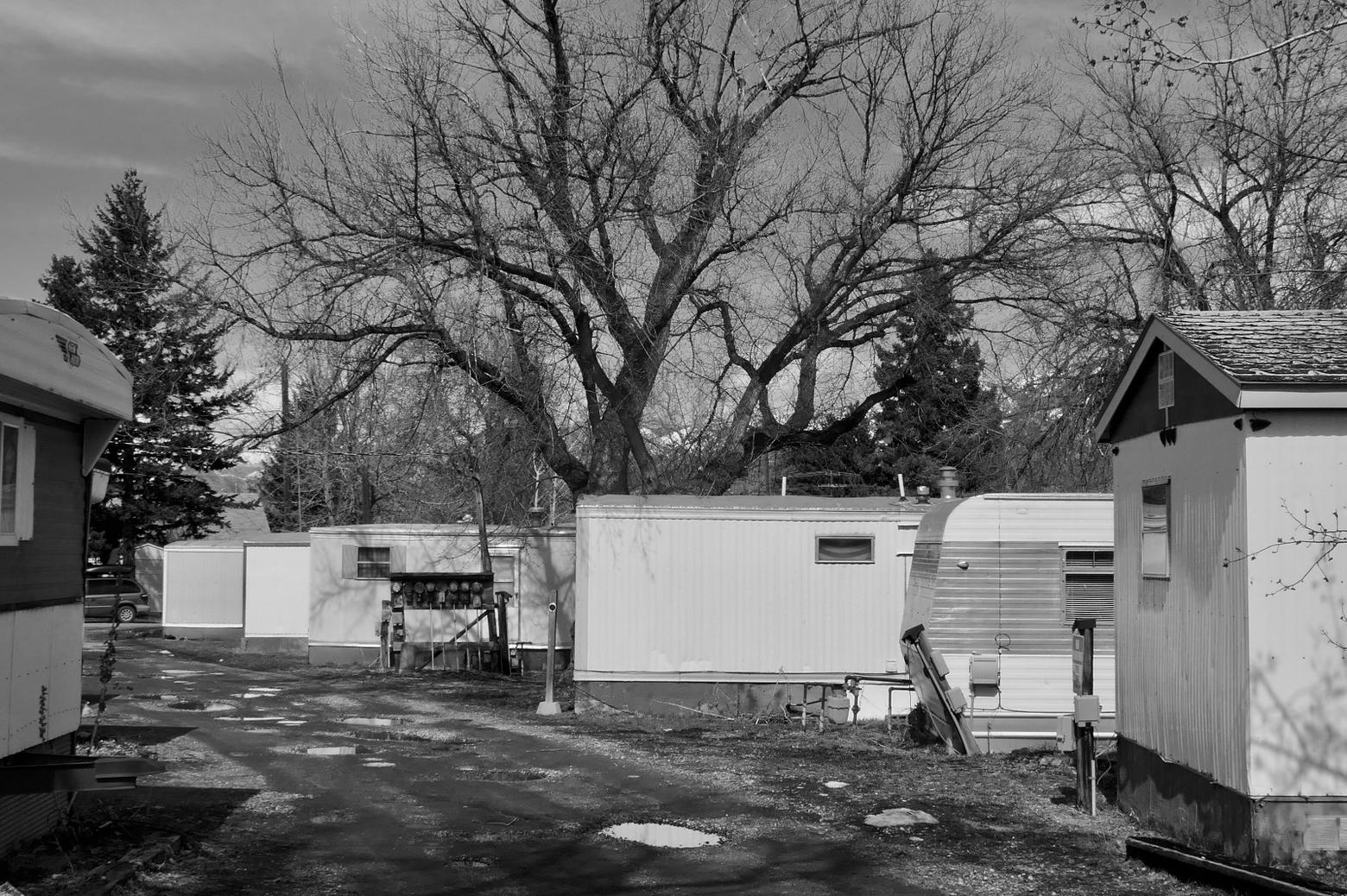 Soon this trailer park in north Bozeman will be replaced and gone too the working-class residents who called it home. Here's a question: when gentrification pushes people out of a community, doesn't anyone notice when they leave? Photo by Tim Crawford
EDITOR'S NOTE: This column by T.H Crawford appeared originally in spring 2018 and was written by him in response to the demolition of a trailer park that was turned into condo/town houses whose values were well beyond the reach of longtime working class citizens. That gap accelerated in the wake of Covid arriving in 2020. Some of the inhabitants of the trailer park were single parents raising kids, elderly and people with disabilities. Nowhere, be it in Bozeman, Big Sky, Jackson, Wyo or Teton Valley, Idaho is there any indication that the free-market, even as the construction industry seeks less regulation, is appreciably making a positive impact in addressing the growing affordable housing crisis. Rather, the free market has only made it worse, observers say. MoJo is sharing Crawford's column again because it is more timely than when it was presciently written. As he says, Bozeman's "community visioning" process initiated by local government has proved to be a failure.
by Tim Crawford
When you peer into the crystal ball of Bozeman’s future, or the community where you are presently reading these words, what do you see?  Is the picture filled only with people just like you?
At this moment, the Bozeman City Commission is involved in a fairly serious “visioning process” that will result in a strategic document guiding the largest urban area in the Greater Yellowstone Ecosystem forward into that future.
Anyone who has lived in a Bozeman-sized community and saw it transformed by rapid growth knows where we are heading. There will be no surprise endings unless elected officials, instead of following the same old script, consciously choose to forge a new one right for the Gallatin Valley.
The length and breadth of the document being prepared in Bozeman might well leave the reader to wonder as to the depth of consideration required by the commissioners for its adoption.
I generally come away with the notion that a comprehensive response from almost any citizen or property owner is beyond the time constraints and mental discipline required—given how complicated they are choosing to make it. Perhaps this is not wholly unintentional but our city leaders should not make the mistake of assuming that our inability to engage means we are apathetic or unconcerned about Bozeman’s future.
If anything, the opposite is true. 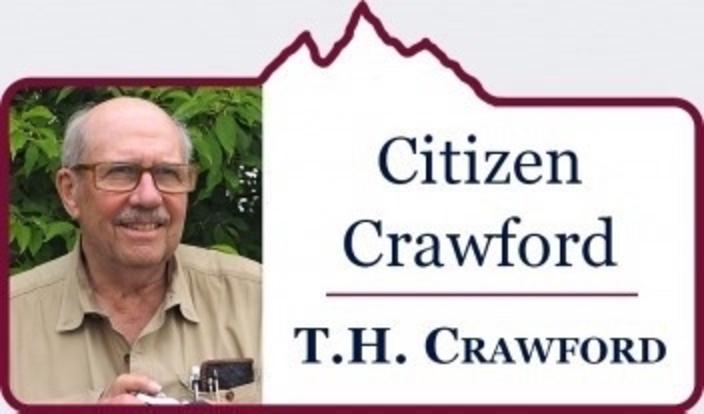 First, let’s be reasonable in agreeing that “sustainable growth and development,” when put in the context of “maintaining longstanding community values,” is a contradiction in terms, perhaps even a conundrum. If you disagree, then please explain exactly what is being sustained?
In economics, there is a concept often applied to change called “creative destruction” in which the old is swept away by the new. Creative destroyers, however, are not ones who often fret about what they are replacing.
Here is how a thinker at the Massachusetts Institute of Technology references creative destruction though take note of its linguistic contradiction: “Creative destruction refers to the incessant product and process innovation mechanism by which new production units replace outdated ones. It was coined in 1942 by Joseph Schumpeter who considered it ‘the essential fact about capitalism.’”
Obviously, we are all profound beneficiaries of technology, innovation and efficiency. Within the context of creative destruction, however, economists also talk unsympathetically about “winners” and “losers” whenever change happens. Often absent is any reflection on whether such change means things become “better” or “worse” and for whom?  Poor people simply are placed pitifully or rather, callously, in the category of negative externality.
Lost or discounted in their abstract thinking is that the losers are real people who want to live and stay in their community—and many have sacrificed blood, sweat and tears to remain only to become casualties of others' indifference.
Certainly, creative destruction happened for blacksmiths when the first automobiles sputtered down Bozeman’s Main Street. Today, shopping malls across America are in trouble thanks to online commerce. Modern times have brought an accelerated pace of creative destruction in many corners of the country and world.
Creative destruction is also resulting in the Gallatin Valley, for example, which represents Montana's best farmland, being entombed by asphalt and concrete. It is resulting in the grain elevators that helped define the look and feel of our downtown soon being razed and replaced with bland, nondescript universalist architecture.
Most of all, the forces of creative destructive are exacting a human toll.  In Bozeman, like Aspen, Jackson Hole, and any zip code making the latest "coolest-place-to-live" lists, gentrification is supplanting people who are most vulnerable to change and who possess fewer options/resources for dealing with its effects.
° ° °
On the front page of the Bozeman Daily Chronicle recently was a headline “Developers Propose To Replace Trailer Park In North Bozeman.”
To those who are profiting from the transformation of community, it is unlikely to elicit even a shudder of compassion.
The story relates that an out of town developer is proposing to replace an older-period trailer park with 16 three-story duplexes. Illustrating the story is an attractive architect’s rendering of a proposed building standing free giving the impression of spacious duplex living. But for whom?
The developer is from the Los Angeles suburb of Santa Clarita, California. I have been there (I grew up in southern California in the beginning of the post-World War II population/development boom) and can truthfully say that it is what many, more recent arrivals in Bozeman are proud to have left.
There is apparently no end to out-of-state developers coming to harvest what appears to be low hanging fruit by comparison from whence they come.
I suppose a rationalized benefit of replacing the unsightly old trailers with new contemporary duplexes is answering the city’s desire to achieve greater central density. The numerically inefficient low density, and probably economically, less-advantaged residents of the trailer park will, of course, have to move on; such is the nature of growth, progress, change and creative destruction, we tell ourselves.
After all, how can the city not benefit from this change with the tasteful higher-valued residences reflecting the dynamic health of our new and improved Bozeman? Still, there is the uncomfortable question none of the boosters want to mention: where are the dispossessed to go?

Most of all, the forces of creative destructive are exacting a human toll. In Bozeman, like Aspen, Jackson Hole, and any zip code making the latest "coolest-place-to-live" lists, gentrification is supplanting people who are most vulnerable to change...

If the city really wants a diverse community as stated in its own vision document, builders and developers should be required to provide housing of similar square footage for those forced to move. This housing should be well-planned and integrated into the community.
Here, I encourage the reader to imagine the baying howl of unfairness that would come from developers should such a suggestion be proffered by the city commission. And yet for those inhabitants of the trailer park, this cost of growth is very real for them, no different from rising seas, linked to climate change, “displacing” indigenous island and coastal dwellers in Alaska.
Creative destruction comes replete with many economic inefficiencies if those promoting it do not have to pick up the full tab of their impacts.
The expansion of big box stores operated by giant out of town corporations not only creates traffic and infrastructure costs for communities, the buying power of those behemoths allows them to sell goods for less than our local mom and pop retailers can.  How many of those retailers have quietly disappeared in recent years?
Yes, jobs are created by the big warehouse stores but a hallmark of locally-owned businesses is that they support, in a big way, the community. They supported local sports programs, Shakespeare in the Parks, and they are socially-invested in the community. They are not bound to pulling as much profit out of our town to appease distant shareholders.
Not long ago when Costco won approval to markedly expand the size of its warehouse complex in Bozeman (no doubt based on a calculation to markedly expand its profits), it was pointed out how traffic problems due to its expansion would be worsened. A Costco executive scoffed at the city's idea of the company reasonably shouldering the financial burden to deal with impacts it helped create and is exacerbating.
Allow me to end this little rumination with an upbeat reference. Consider what happened recently in Bozeman’s rival Montana city, Missoula. Up there, along the Clark Fork River, a different paradigm surfaced involving residents in trailer parks.
A concerned citizen, one Sven Newman, staged a two-day public fundraiser and paid back taxes on 31 mobile homes, saving them from auction and thus preserving domestic continuity for those working-class residents.
This kind of empathy and compassion ought to put a bit of shame on the dispassionate practitioners of creative destruction. In a community like ours where the pursuit of personal pleasure (enjoyed mostly by those who can afford it and with plenty of leisure time on their hands) rules, will there continue to be a growing blind-spot in Bozeman’s forward-thinking vision?

Increase our impact by sharing this story.

GET OUR FREE NEWSLETTER
Never Miss A Big Story!
Tags: Tim Crawford

Sue Cedarholm Is Creating One New Painting, Every Day, For A Year
Through her column, "Watercolor Diary," the Jackson Hole artist will share vignettes about her interludes outdoors.
Read
Community, Community Change, Mental Health

Feeling Low? Even In Mountain Towns You Can't Escape The Blues
Timothy Tate, MoJo columnist and mental health professional, identifies the top five reasons why people seek his help
Read
Back to home