With Wildfires, It's Easy To Rake Trump Over The Coals 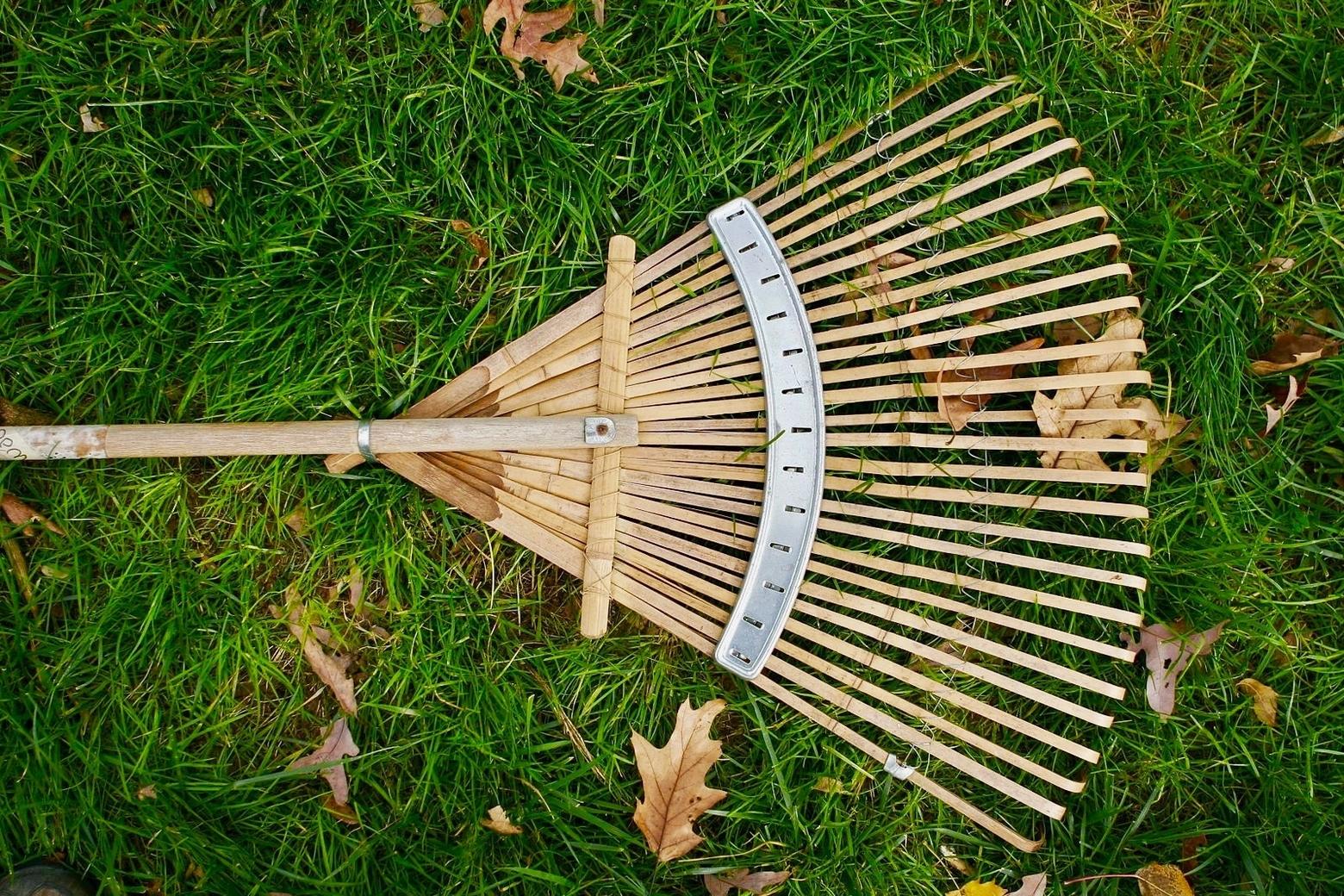 Can America's national forests become healthier and be more fire resistant through raking? Late-night comics had a field day with President Trump's comment about how to prevent wildfires. But, like all things, forestry in an age of human-caused climate change is complicated. Photo courtesy Wikipedia
Living in a rural community and being a volunteer firefighter, I occasionally have been part of “structure triage” teams, assessing which houses could survive an approaching wildfire, and which ones aren’t likely to. If we have the opportunity, we encourage homeowners to take steps to help save their structures. Sometimes, the situation calls for evacuations instead of last-minute mitigation.
In recent years, as more people pour into the “wildland-urban” interface and more rural subdivisions, fire safety for those of us working in Madison County, Montana has been at the forefront of our minds. We also often discuss the trends we’re seeing with snowpack, the earlier arrival of a fire season that lasts longer and the rising costs associated with trying to save structures.
These issues aren’t abstract for us; they are real. Sometimes lives are at stake as well as the ecological integrity of forests and even the fiscal health of counties.
California’s deadly Camp Fire killed at least 86 people, with many residents still unaccounted for; over 14,000 structures have been destroyed.  The Camp Fire ranks with some of the deadliest wildfires in North American history. 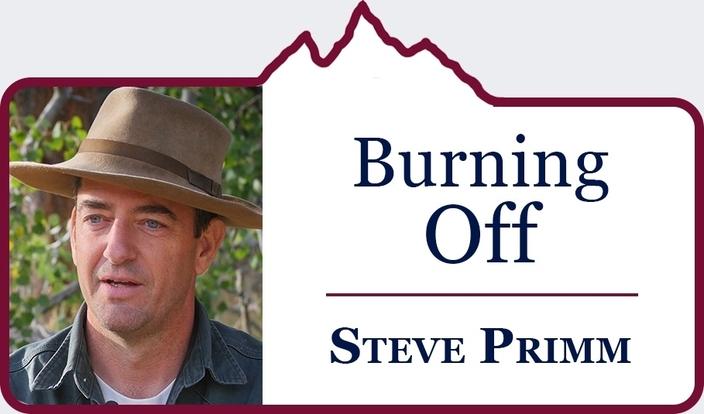 Out of the ashes, though, President Donald Trump gave many a dose of comic relief, with his assertions (in an interview with Fox News) that “raking” the forest floor would prevent destructive fires. The President repeated this advice while touring the still-smoldering neighborhoods of Paradise, CA, this time claiming the president of Finland had clued him in to the importance of raking (Finnish President Sauli Niinisto did discuss forest management briefly with Trump on Armistice Day in Paris, but does not recall any discussion of raking).
The internet has promptly and roundly mocked Mr. Trump’s remarks.  Derisive memes proliferated, and the humorous hashtag #RakeAmericaGreatAgain has spread, well, like wildfire.  Smokey Bear now appears carrying a rake instead of his trademark fire shovel. The good-natured people of Finland responded with humorous videos of staged raking events. For mirth, click on video below:
But take a step back: is the idea of using a rake as a firefighting tool really as absurd as people are making it out to be?
And in our giddy haste to pile on this latest misstep, are we short-circuiting an important discussion about wildland fire?
For sure, the idea of a New York City real-estate developer who has never hiked through a western forest weighing in on land management or firefighting is galling, the same as his pronouncements about climate change.
Unlike the chainsaw-wielding George W. Bush who enjoyed clearing brush around his Texas ranch, or hammer-swinging Jimmy Carter (still building homes with Habitat for Humanity at age 94), there’s little evidence that Trump has ever done any manual labor.  Moreover, he seems to experience the outdoors mainly through golf.
Let’s look at the face-value substance of his remarks, which is where most of the derision focuses.  Rakes – the plain old leaf-raking kind – can be an efficient firefighting tool.  Firefighting crews do in fact carry them, and fire supply companies sell them.  The 2017 Hollywood film, Only the Brave, dramatizing the tragic 2013 fate of the Granite Mountain Hotshot crew in Arizona, depicts firefighters carrying small rakes on their line packs.
Why would a wildland firefighter carry a rake? Let’s start with some basic principles: A great deal of wildland firefighting consists of keeping fire from getting to more potential fuel.  Terrain, resources, and remoteness dictate that wildland firefighters can’t necessarily douse a fire with water in the way that their urban counterparts can.  Aircraft can deliver water or fire retardant to a fire in virtually any terrain, but they’re not always available. Wildland firefighting on the ground often consists of scraping, digging, sawing, or bulldozing a line in the earth to separate fuel from flames.
Another basic principle: fine fuels.  Anyone who’s ever built a fire knows about fine fuels, but might call them “kindling.” A log, no matter how dry, can be difficult to ignite. That’s why we start with substantially smaller material that will light easily.  Once the fine fuels have a good blaze going, progressively bigger fuels will begin to ignite, until we have a roaring fire.
Fine fuels are an often-overlooked piece of the wildland fire formula.  Dried grass, dead conifer needles, twigs and other fine fuels are the kindling that takes a fire from sparks to inferno.
In the wildland-urban interface, fine fuels are a major factor in whether buildings burn or emerge intact when a fire passes through. Getting fine fuels away from structures is critical, and efficiency is imperative.  A few swipes with a rake can remove a layer of flammable needles from under a deck, or scratch an effective fireline through a yard. (It’s even better if homeowners do their own raking weeks ahead of a fire.)
The President may well have seen firefighters on television battling the Camp Fire with rakes (he may have also seen them using a more versatile tool called a McLeod, which has a hoe blade on one side and big tines on the other). Some of his supporters have suggested he really meant a bulldozer with a toothed blade.
As much as it might hurt to admit it, Mr. Trump technically is not off-base in suggesting that a rake can be a tool for fighting wildland fire and preventing structure loss.  It’s no different than saying a garden hose comes in handy when trying to keep plants nourished during a massive drought.
Here’s the problem on focusing too much on Trump’s rake remarks: A rake is merely a tool – a legitimate one in certain local tactical situations.  But we are dealing with titanic natural forces, happening on hundreds of millions of acres of the West in years when normal precipitation doesn’t materialize, or heatwaves set in or drought conditions persist or all three, which is the new normal of climate change. 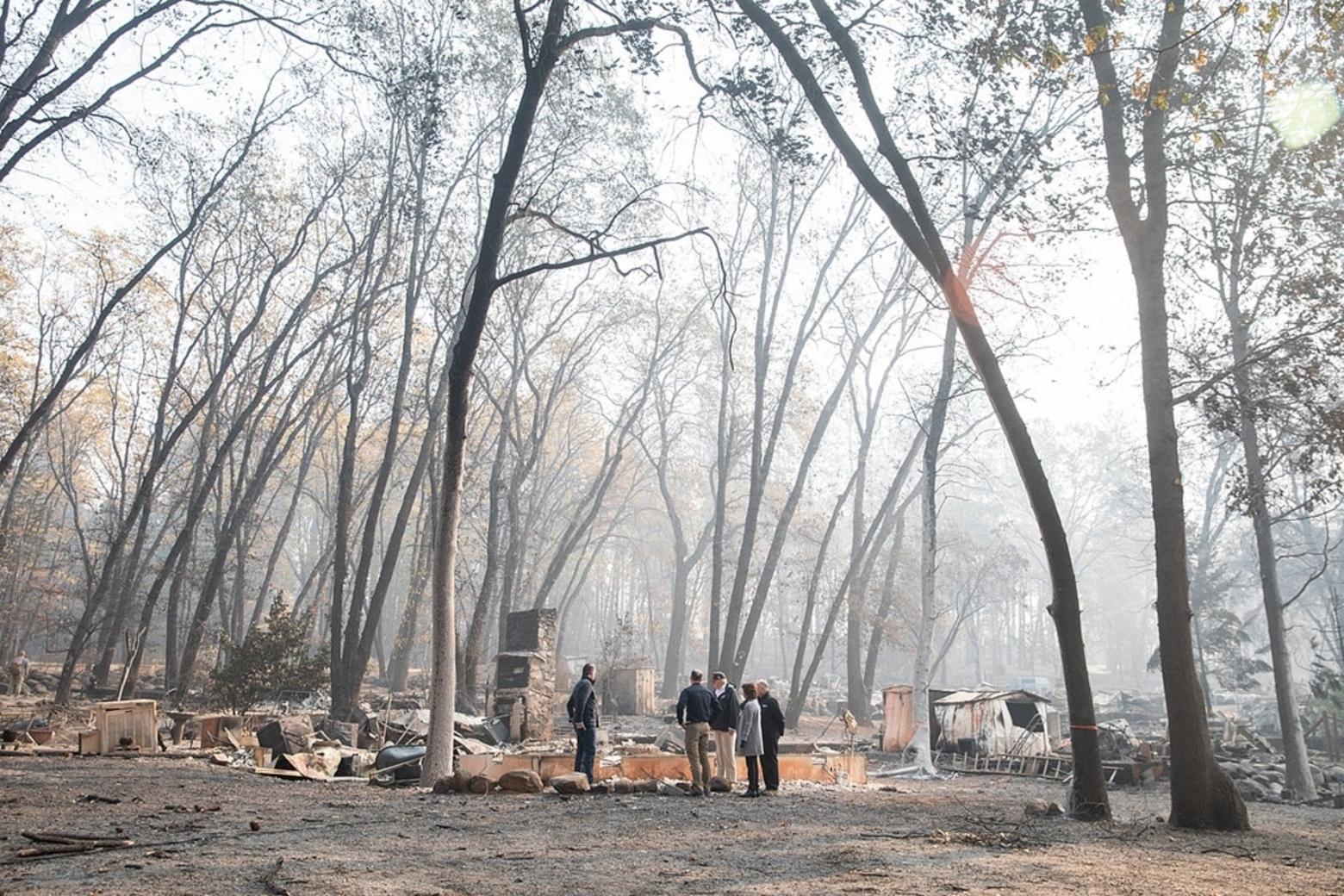 President Trump visits the town of Paradise, a California community destroyed by fire. Photo courtesy The White House
As with many utterances made by the President, things get lost in his translation.
By making this moment all about what Trump said with regard to an implement you can buy at the hardware store, the argument then becomes one about the legitimacy of the rake as a wildland tool, instead of keeping the focus on higher-order concerns like community planning, building codes, and climate change. The costs are daunting and besides dangers for human safety, building in the wildland-urban interface is amassing a toll on wildlife habitat.
Here's a stat published in a 2018 report prepared by Headwaters Economics: In Montana alone, more than 11,000 new homes—one in eight of all new homes—were built in areas with high wildfire hazard in the western part of the state during the last 26 years. Homes in areas with high wildfire hazard doubled, outpacing development rates in areas with low wildfire hazard. These trends are most pronounced in a handful of western Montana counties, including Greater Yellowstone's Gallatin, Park and Madison.
Eight counties —Ravalli, Missoula, Gallatin, Lewis & Clark, Lake, Granite, Flathead, and Park—account for 96 percent of the new houses in areas of high wildfire hazard in western Montana, Headwaters notes. Ravalli County and Missoula County saw the most growth in areas of high wildfire hazard, together accounting for 82 percent of the housing growth in areas of high wildfire hazard.
"This trend is not limited to western Montana. Nationally, the wildland-urban interface (or the area where houses and wildland vegetation meet or intermingle) is the fastest-growing land use type," Headwaters reports. "This development pattern puts lives and property at risk, increases the difficulty and expense of fighting fires, and often results in more human-ignited wildfires."
These are serious not trivial issues. 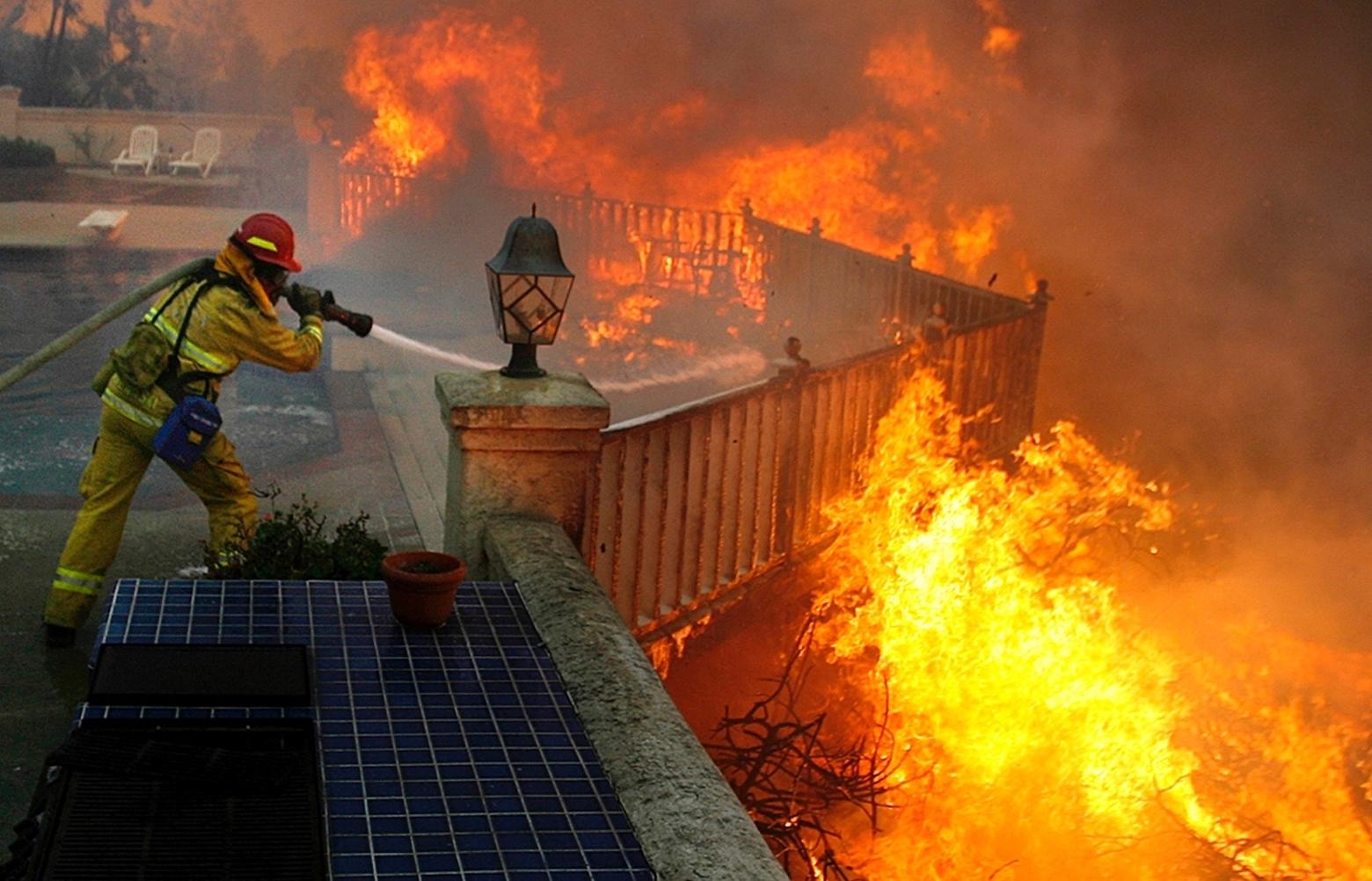 The "wildland-urban" interface, where forests and grasslands meet human subdivisions pushing deeper into fire-prone areas, is ground zero for the debate about wildfires. Despite recent tragedy, are we learning the lessons? And, as climate change dries out forests and huge sums of money are spent defending life and human property, are there places where people shouldn't be building? And, if they do build there, should the public be expected to foot the bill for firefighting costs and will insurance carriers continue to provide coverage? In the rural West, development in the wildland-urban interface also costs more to service and fragments wildlife habitat. These are serious matters and ithey are trivialized by Trump's suggestion that forests need to be raked better to keep them healthy. Photo credit: Department of Homeland Security and Technology Directorate
Compounding matters, the President’s ardent defenders will make it all about whether a rake is indeed a firefighting tool. And because it is, they will then summarily dismiss everything else that needs to be said about managing our fire challenges.  I would encourage them to come out during the height of our fire season and show us how to stop walls of flame with better raking techniques.
What we need now is not more humor, but a serious conversation about fire and communities.  We can’t afford to waste time confusing tactics, strategies, mission, and values. Lives are at risk.
Anyone paying attention can see our public discourse is degenerating into a corrosive, unproductive form of entertainment (albeit an angry sort of entertainment), instead of a way to shape collective values and find ways to solve the problems we face. Getting sidetracked by the latest lampoonable Presidential misstep doesn’t improve things.
Indeed, some argue that Trump is the elected embodiment of the showman’s dictum: there’s no such thing as bad publicity. If you’re mocking him, you’re still talking about him. And you’ve perhaps fallen for the tactic of misdirection, which distracts us from more substantive matters than what President Trump may or may not know about wildland fire.
So, have some fun with the rake memes. Enjoy that distraction. Then re-engage in the grown-up business of figuring out how we adapt to our new wildland fire realities.