The Future Staring Us Back: Getting Serious About Climate Change

How is Greater Yellowstone being impacted? A panel of distinguished experts will provide answers Wednesday as part of Big Sky Big Ideas Fest. You are invited 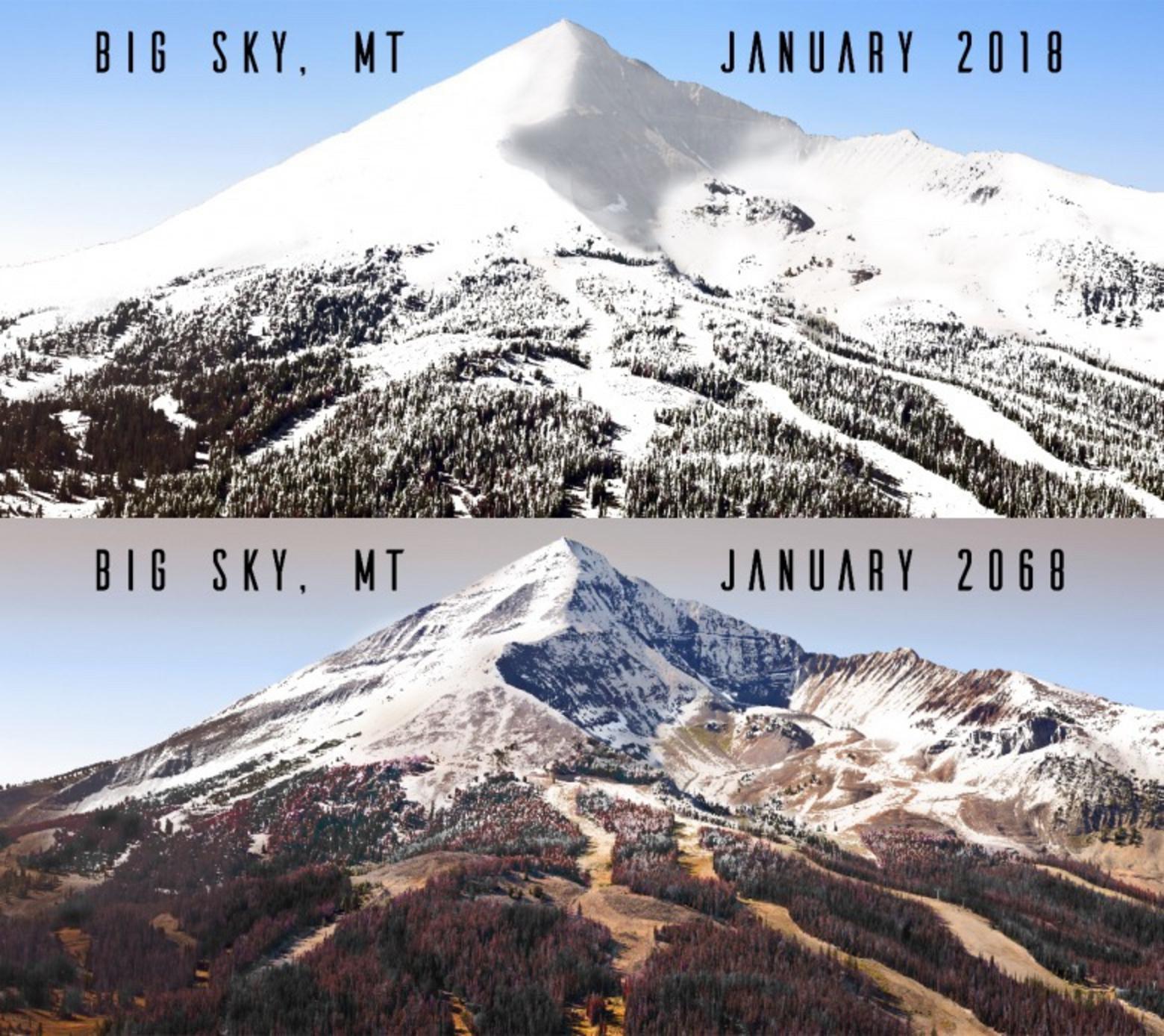 Could this, will this, be what winters will look like two human generations in the future? What can be done to slow it down or prevent it from happening? Graphic created by Gus O'Keefe/Mountain Journal
by Mountain Journal
If you talk with scientists, the changing climate on planet earth has yielded a number of touchpoints, too numerous to list, that confirms overall temperatures are rising faster than at any time in human history. The data are irrefutable and they portend a transformation that will leave our region a few generations from now very different from what we know today.  With a 9- or 10-degree average annual temperature rise possible by the end of this century, the high plains of eastern Montana and Wyoming may a climate that more closely resembles that of Utah and the Great Basin.
This week four observers based in the Greater Yellowstone Ecosystem will explain what they’ve found in their own examinations at a virtual forum, open to all, titled “The Arctic to Yellowstone: A Conservation on Climate.” Ennion Williams with Outlaw Partners Media, says all people need to do, in order to attend or hear what the experts have to say, is click on this link: www.tedxbigsky.com.  The event is free to attend in person and people can also follow a live stream from their homes.
The event begins at 6 pm Wednesday, Jan. 27 at the Warren Miller Performing Arts Center with a screening of filmmaker Max Lowe’s mini-documentary about the plight of polar bears in the Arctic. That it’s one of the inaugural offerings of the 2021 Big Sky Big Ideas Fest and its theme, Awakenings, is more than uncanny. These events are also connected to TEDx presentations in Big Sky  on Saturday, January 30 that culminate with a keynote from one of the most distinguished climate scientists in our region, Dr. Cathy Whitlock, a professor at Montana State University and member of the prestigious National Academies of Sciences.
On Wednesday, Dr. Whitlock will join Lowe, research scientist Dr. Twila Moon of the National Snow and Ice Data Center, and Dr. Kristin Gardner, executive director of the Gallatin River Task Force in a roundtable discussion moderated by journalist Todd Wilkinson, founder of Mountain Journal.
The footage for Lowe’s award-winning film was shot near Churchill, Manitoba, a place where polar bears in Hudson Bay converge and are facing winnowing ice pack where they would normally hunt seals. Moon will be sharing her insights into what’s happening with melting glaciers as barometers of climate, and what they are telling us. Whitlock, who is currently completing an analysis on the ecological impacts of climate change in Yellowstone, will offer a preview of her group's  findings that will appear in a new report as part of the Montana Climate Assessment. Last but certainly not least, Gardner will speak to climate issues around Big Sky and concerns for local natural gems like the Gallatin River.
Despite these being Covid times, the entire line-up is stellar. Joseph O’Connor, editor in chief and vice president of  media for Outlaw Partners will be interviewing Big Sky Bravery Founder Josh McCain and his brother-in-law Jeremy Keller, who's been deployed 18 times overseas with the Army Rangers. O’Connor added, “Our Friday Afternoon Club this week will be an Ideas Fest special with the noted singer-songwriter Jim Salestrom. We're looking forward to bringing these events to a national audience this year."
Again, to hear any or all of the presentations, go to www.tedxbigsky.com.

Between 1932 and 2005, this is what the retreat of Boulder Glacier in Glacier National Park looked like. Losing glaciers isn't merely a cosmetic alteration of landscape or inconsequential. The winnowing of ice sheets has coincided with rising temperatures, less snowpack and snow melting earlier, large forest fires and lower flows in rivers come summer. Photo illustration courtesy Greg Pederson/USGS