From the "First Family" in the Yellowstone region twelve millennia ago to today, Shane Doyle says a teepee encampment reminds that humans have a deep history in this part of the world 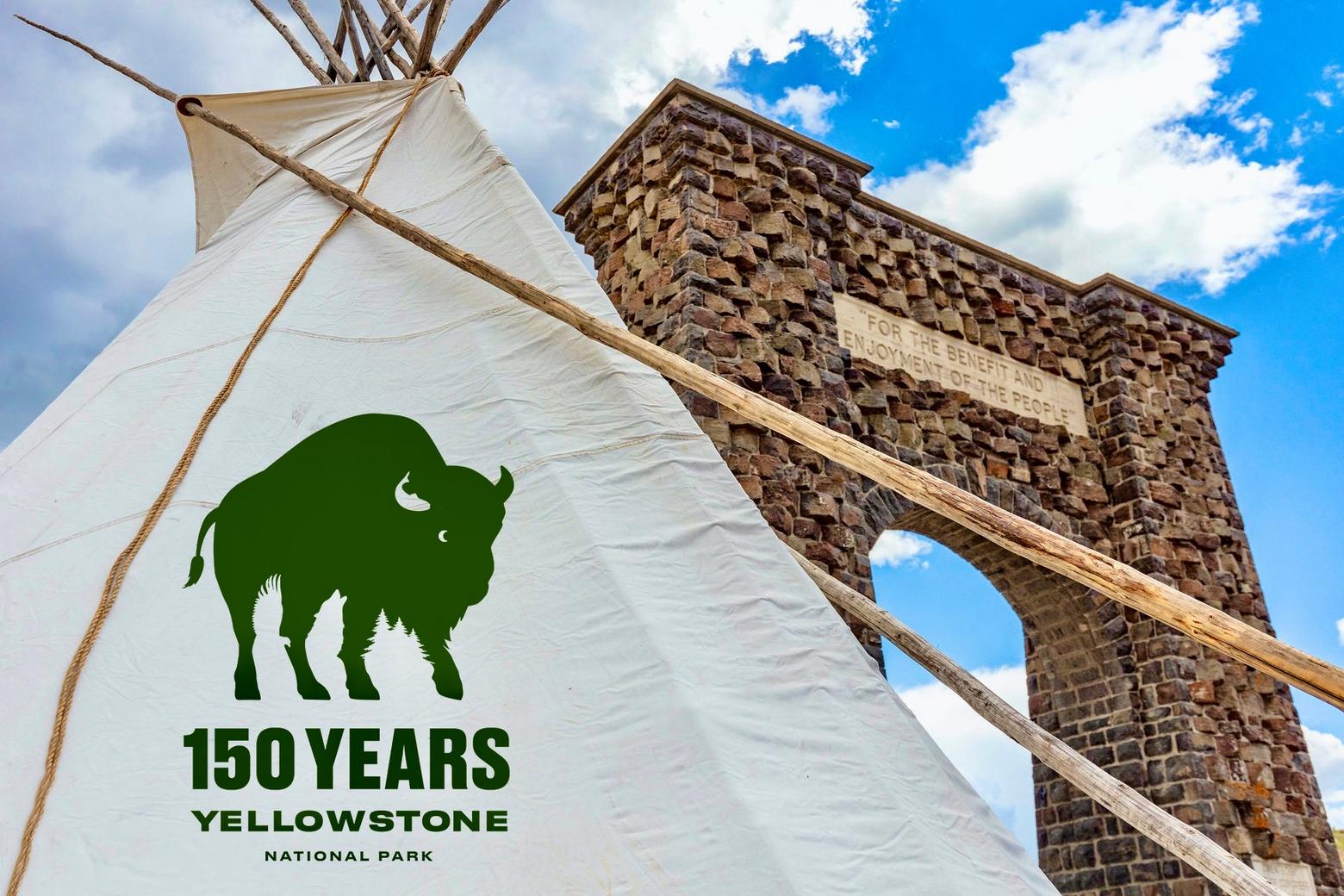 Photo of teepee at Yellowstone's Roosevelt Arch courtesy National Park Service
by Dr. Shane Doyle
Yellowstone, the world’s first national park, marks its 150th birthday this year and it is under enormous and unprecedented pressure. The park is contending with a rapidly warming climate, a dramatic rise in visitors, and threats to its most beloved wildlife species, including bison, grizzly bears and wolves.
Yet amid the concern and uncertainty, Native people are making their profound and overdue return to the ever-shifting landscape. This summer, for the first time in its history, Yellowstone will host an Indigenous teepee village near the town of Gardiner, Montana and a Native interpretive center at the Old Faithful Visitors Center, both part of a series of public art installations known as Yellowstone Revealed.
Although Native people were dispossessed and officially removed from Yellowstone in 1872, 27 Tribes hold a deep historical connection to the place that stretches back over 12,600 years. This is evidenced by the oldest known burial in the Western Hemisphere, which occurred at the Anzick Clovis site, about 90 miles north from the park entrance near Gardiner.
As a Native person (Crow/ Apsáalooke) with deep familial roots in the region, I was on a research team that discovered the Clovis boy was one of my ancient relatives.
In him, I see the unbroken circle of love and wisdom that connects Native people today with our ancestors and the landscapes that we recognize as home. I helped coordinate the reburial and repatriation of the ancient boy, back near the exact site where he was disturbed in 1968.
This ceremonial reburial was attended by tribal representatives from throughout the Yellowstone region, and the gathering would’ve looked familiar to the "First Family" there when he was laid to rest; close relatives and community loved ones coming together to pay tribute, reflect and provide solace to one another.
The Native people who attended the ceremony that day were completing a full circle back to the sacred and magical Yellowstone region that existed long before it had that name. 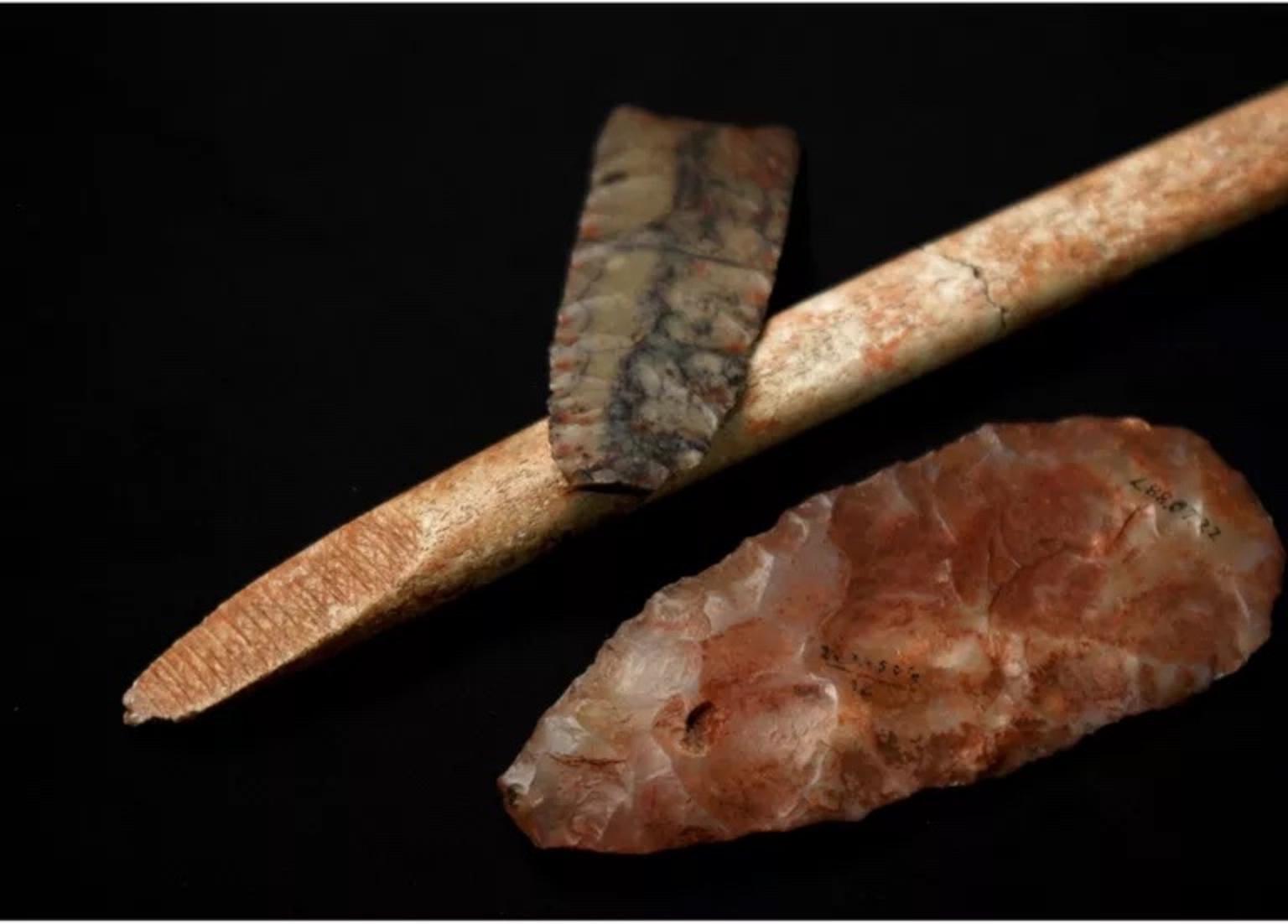 Clovis projective points unearthed at the Anzick site. Photo by Sarah Anzick
The historical significance of the First Family’s discovery cannot be understated, and they remain the only family on the continent to ever be directly associated with Clovis artifacts. Ancient remnants of the family’s descendants have been found throughout the Yellowstone area, most prominently around Yellowstone Lake and the Yellowstone River. Around 2012, the effects of climate change began to reveal new opportunities to study the First Family’s presence in the high country along the park’s eastern boundary.
In a separate section of the Greater Yellowstone Ecosystem, the Absaroka-Beartooth Wilderness is beginning to reveal a stunning cultural history as the region’s hundreds of semi-permanent ice patches, varying in size and age, begin to melt. As the ice patches shrink due to ongoing and unprecedented rising temperatures, long-submerged artifacts of Native people who lived seasonally at 10,000 feet above sea level are surfacing.
Ledger drawing of Cheyenne war chief and warriors (left) making coming to a truce with a Crow war chief and warriors (right) after a battle, ca 1880. 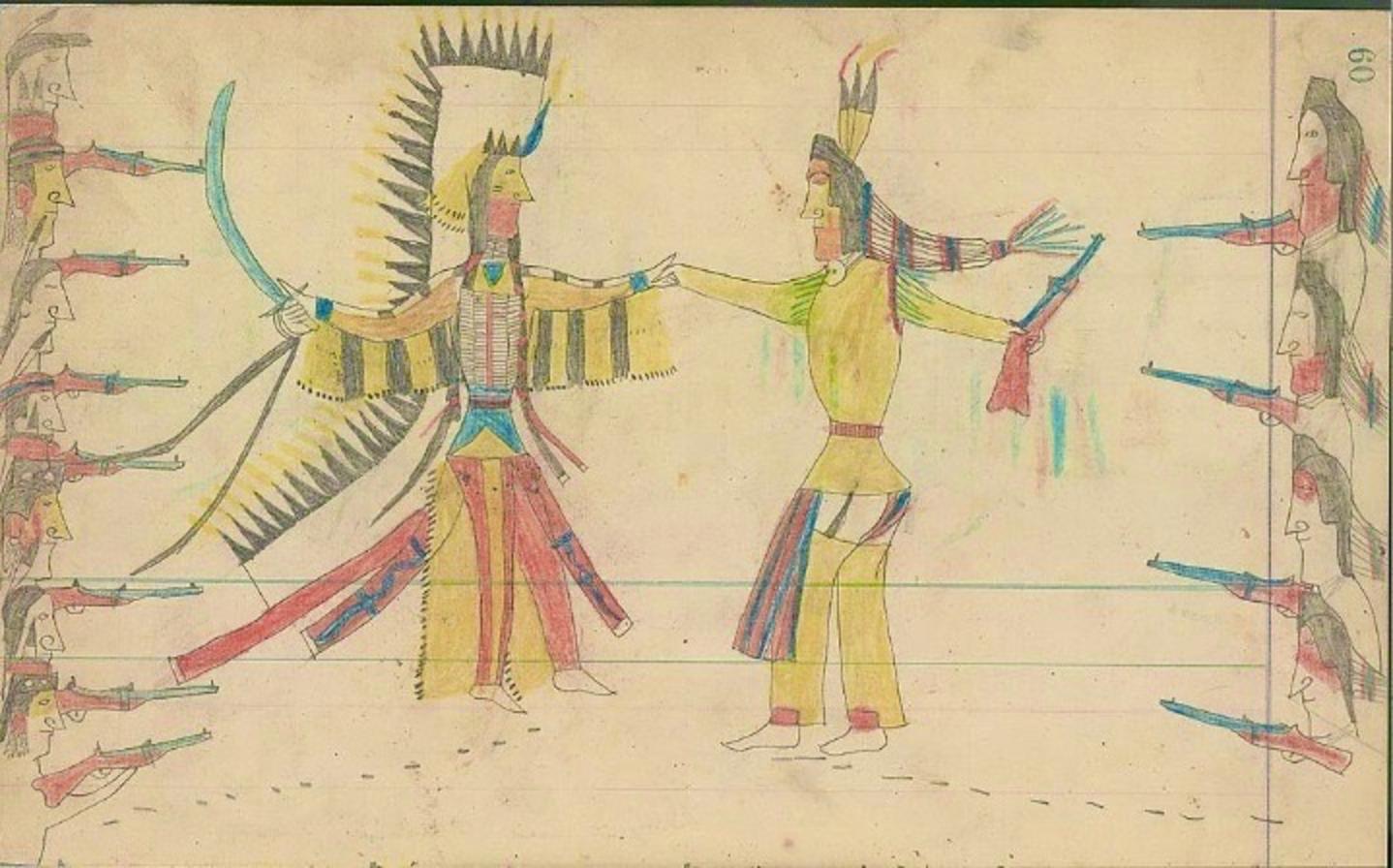 Ledger drawing of Northern Cheyenne war leader and warriors (left) coming to a truce with a Crow leader counterpart after a battle (artwork circa 1880 or about eight years after Yellowstone was created and four years after the Battle of the Little Bighorn). More than 27 tribes have a historical connection to the lands in and around present-day Yellowstone, including tribes that, at various points, were enemies. Dr. Doyle's research and that of colleagues reveals that indigenous habitation of the region extended, at least seasonally, to some of the highest reaches of the Beartooth Mountains northeast of the national park. It could unlock some insights into how people coped with earlier expressions of climate change. Artwork public domain.
Some of the ice patches in the Beartooth Plateau date to over 10,000 years old, and evidence indicates that the descendants of the First Family enjoyed great success hunting big game animals and spending their summers in higher-altitude areas above the tree line.
Personally, my experience as a scientific researcher of ancient history in the Yellowstone region has been a blessing and an inspiration. Yellowstone is at the forefront of an American history, and its origin story remains incomplete without Native voices.
And, looking ahead, as a member of the Indigenous contingent working on the Yellowstone teepee village for this year’s 150th commemoration and plans far into the future, I am thankful and optimistic about this new partnership between the park and the indigenous people who have called it their homeland since time immemorial. Representatives of these tribes are connecting the past with the present as we look toward a future where Native voices are once again part of this revered landscape.
Also read these essays by Doyle or featuring an interview with him at Mountain Journal:
In Home Land by Shane Doyle
A Crow Suggests How The Crazies Should Remain Wild And Sacred by Shane Doyle
Yellowstone Confronts Its Past by Todd Wilkinson 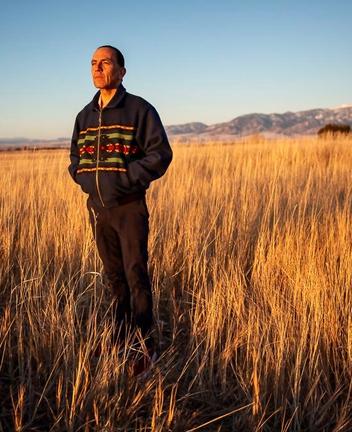 Dr. Shane Doyle, Ed.D is a Crow  (Apsáalooke) tribal member and educational and cultural consultant who grew up in Crow Agency, Montana and currently resides in Bozeman. He is helping Mountain Time Arts and tribes in the region implement the Yellowstone Revealed Project along with other partners, including the National Park Service. You can learn more by clicking here.
Doyle is involved in many educational interests, causes and organizations. He is a board member of Mountain Journal.  A singer of Northern Plains tribal style of music for 30 years, Shane holds a Doctorate in Curriculum and Instruction from Montana State University-Bozeman, and completed a post-doctoral appointment in genetics with the University of Copenhagen, Denmark in 2016.  With 20 years of teaching experience, he designs American Indian curriculum for many entities, including Montana public schools, the National Park Service, and the Museum of the Rockies.  He is also currently serving on the Board of Directors for the Bozeman-based Extreme History Project, Hopa Mountain, and the Archaeological Conservancy, as well as serving on the Montana Arts Council culture and aesthetics committee, the advisor team with the Montana Wilderness School, and the Governors Parks in Focus Committee. He and his wife Megkian are blessed with five children.