The "historic" floods in Yellowstone obliterated roads, disrupted our use of the park and altered Boiling River, but Nature isn't "destroyed" 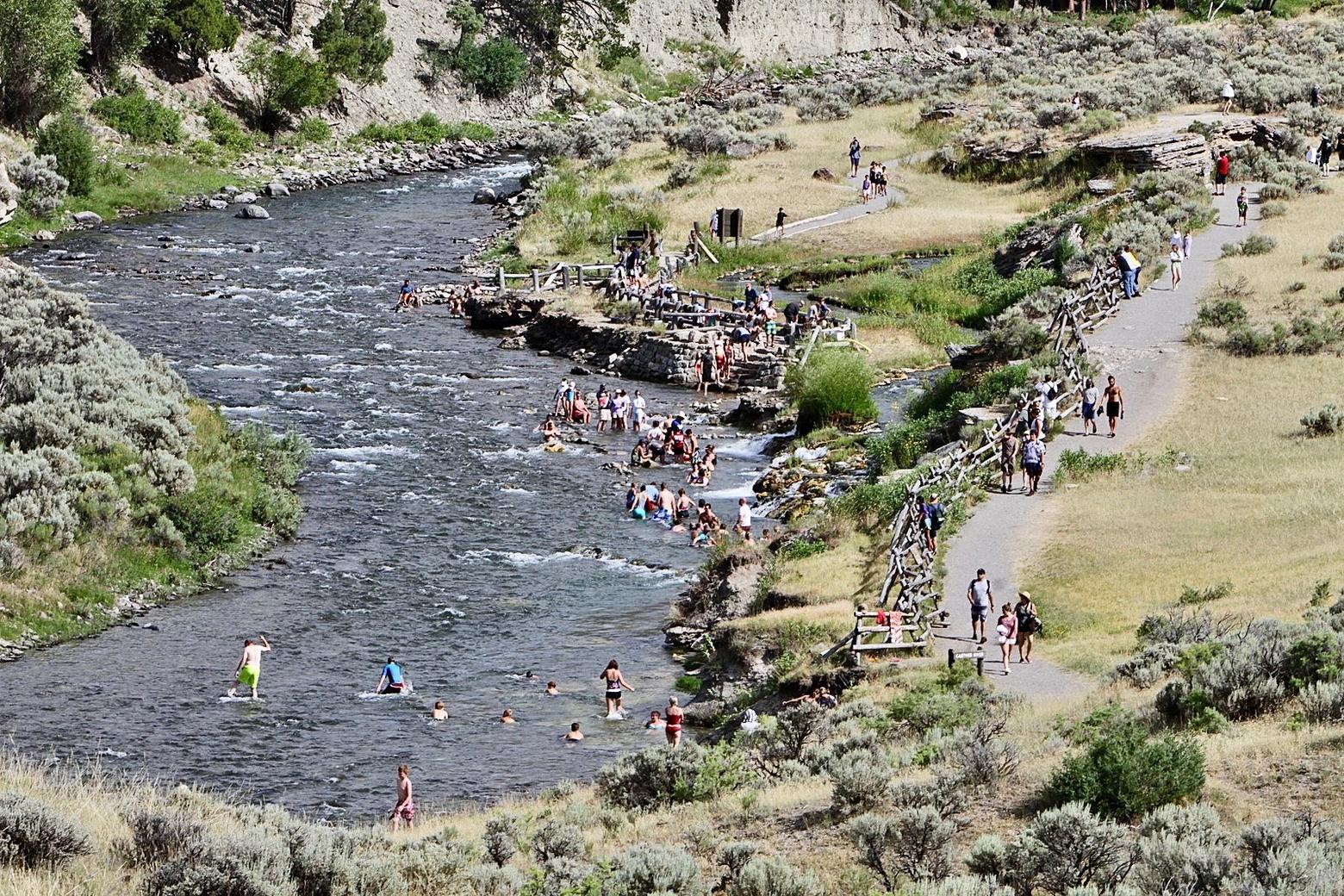 Boiling River, as it was known to millions and as it looked when Yellowstone photographer Jim Peaco took this photo on July 30, 2014. It is now gone.
By Todd Wilkinson
Over many years, generations of visitors to Yellowstone National Park have gone "soaking" in the geothermally-heated waters at "Boiling River."
Long a favorite spot known to locals and park employees, in recent decades use levels soared, prompting the park to improve the parking infrastructure and better manage the beaten path leading to the place where hot water streams out of the ground and melds with cold flows of the Gardner River. There, at that confluence, the pooling water created a bathing spot were people would sit as if in a natural jacuzzi. (See photo above).
But today the destination formerly known as Boiling River, located near park headquarters at Mammoth Hot Springs, has undergone a dramatic shape shift; that's right, Boiling River is no more, at least as it used to be, swept away in early June by the gnashing raw forces of the river's current.
The recent “historic” floods in Yellowstone that obliterated park roads, including the main entrance road connecting Gardiner, Montana to Mammoth, did not do the same to wildness inside the national park. This doesn’t mean there isn’t a pain of loss and uncertainly for people left in the wake of water that re-sculpted river and stream corridors.
Boiling River is an example of how Nature, expressing her force beneath the Earth's surface and/or above it in the sky, is constantly mixing things up, defying our expectations of what permanent is and what is not.
Nature does not adhere to our desires and it's as true with Boiling River as it applies to trophy homes built precariously on sandspits along the Outer Banks of North Carolina now being washed away by rising sea levels. And, right before our eyes, in Utah, we are witnessing the winnowing and potential disappearance of the Great Salt Lake not so much because of what Nature is doing but because of how humans are stewarding the natural things that gave birth to the lake.
I started musing on such occurrences long ago when given a humbling reason why. 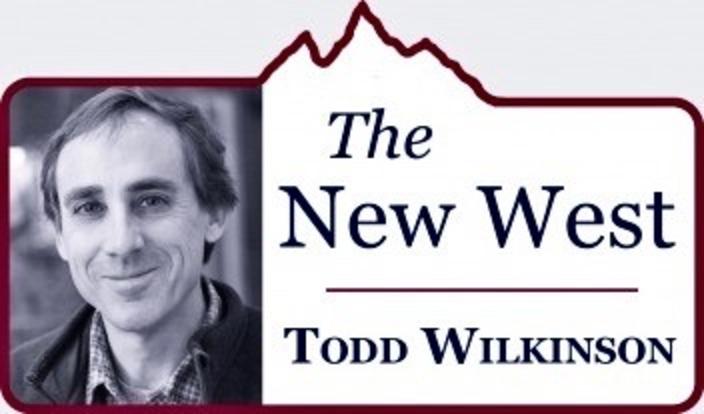 On Sept. 7, 1988, I was among a small group of reporters evacuated to the very edge of Old Faithful Geyser’s blow hole. The open treeless ground of sinter dust rimming the famous gusher was considered one of the safest spots to be that day in the Upper Geyser Basin of Yellowstone.
A park ranger frantically escorted us there where we waited in retreat from a giant wall of flames pushed it in our direction by a roar of hurricane-force winds. We could hear the approaching wildfire’s sonic approach long before the blinding smoke squall arrived followed by a blast of intense heat and raining embers that caused surrounding hillsides to erupt in conflagration on the other side of us.
Yes, it was surreal.
A fickle shift of only a few degrees in wind direction spared one of the most iconic rustic hotels in the West from encountering a direct hit and likely being reduced to ash. The human-built, historic Old Faithful Inn could easily have caught fire and burned down and we too might have perished.
All the while, during the mayhem of human scrambling, Old Faithful Geyser continued to erupt and it was indeed otherworldly to see the fountain backdropped by what humans might describe as apocalyptic light.
No one or no part of Yellowstone died on that day. Later, in the autumn of 1988, after a snowstorm had put out the massive fires that even hundreds of millions of dollars could not suppress, I had a conversation with Yellowstone’s chief scientist, John Varley, who offered a perspective I carry forward to you now.
“Nature,” Varley said, “never destroys herself.”
Quite the opposite, he noted. She is constantly creating, additively or reductively, though not often in accordance with the wishes of Homo sapiens to control her. "Natural disaster" is a term coined not by Nature but by us. Usually, when such an event happens it involves, in some ways, us pushing the margins and trying to defy her dynamism.
Nature does not apply to receive federal disaster relief because of floods, droughts, fires, blizzards, earthquakes, hurricanes, etc. We do.
With more than one-third of the park’s 2.2 million acres touched by fire in 1988, ecologically uninformed elected officials in that year wrongly asserted that Yellowstone had been rendered a lifeless “moonscape.” Some said it had been left so ugly that tourists might not want to come or that it would take a long time before wildlife recovered.
Yellowstone, like the planet, is a product of fire, magma and other natural elements such as rainfall and snowpack affecting the landscape we associate with the hydro-geothermal panorama of the park, including its subterranean network of 10,000 wondrous geysers, hot springs, colorful pools and steam vents. 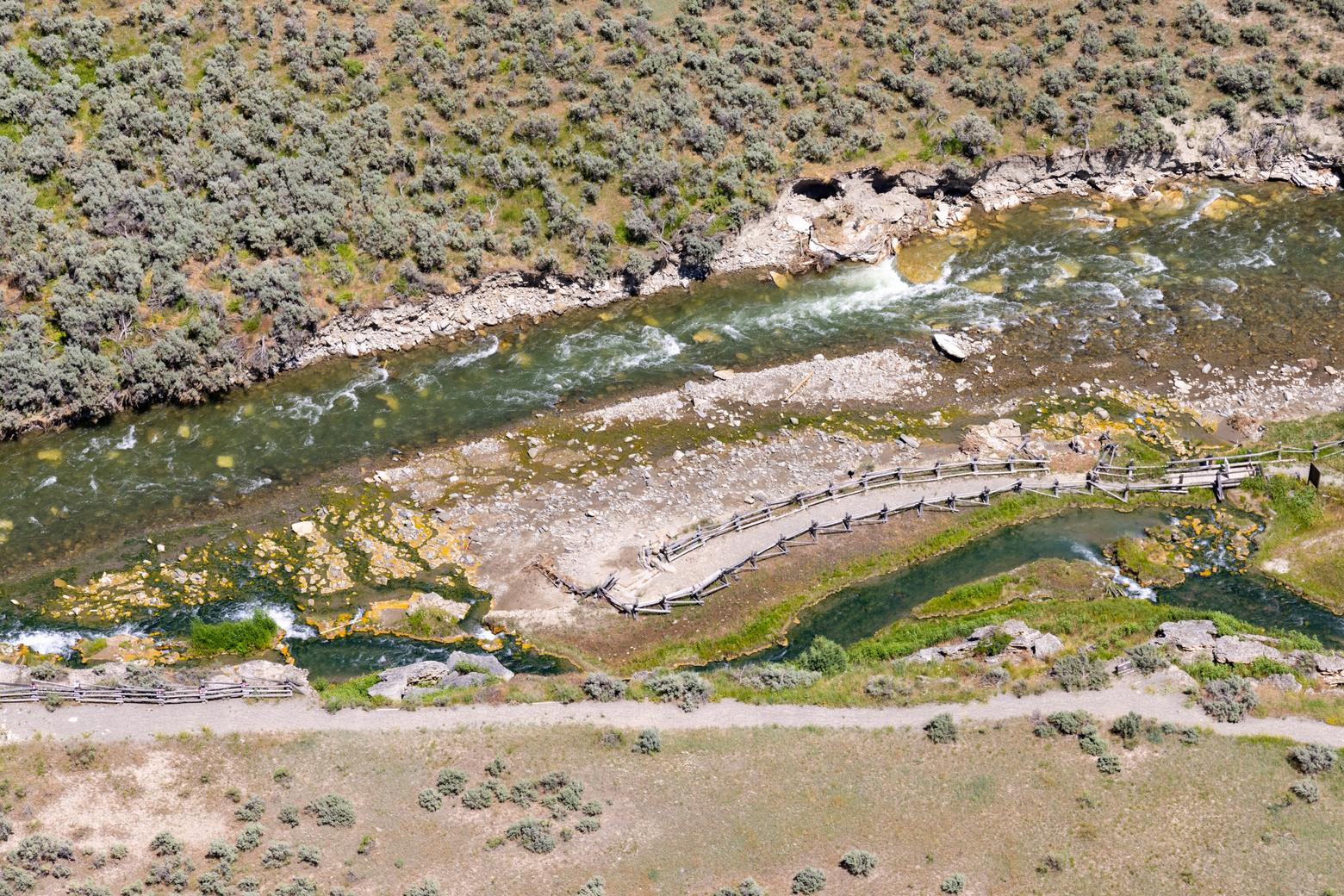 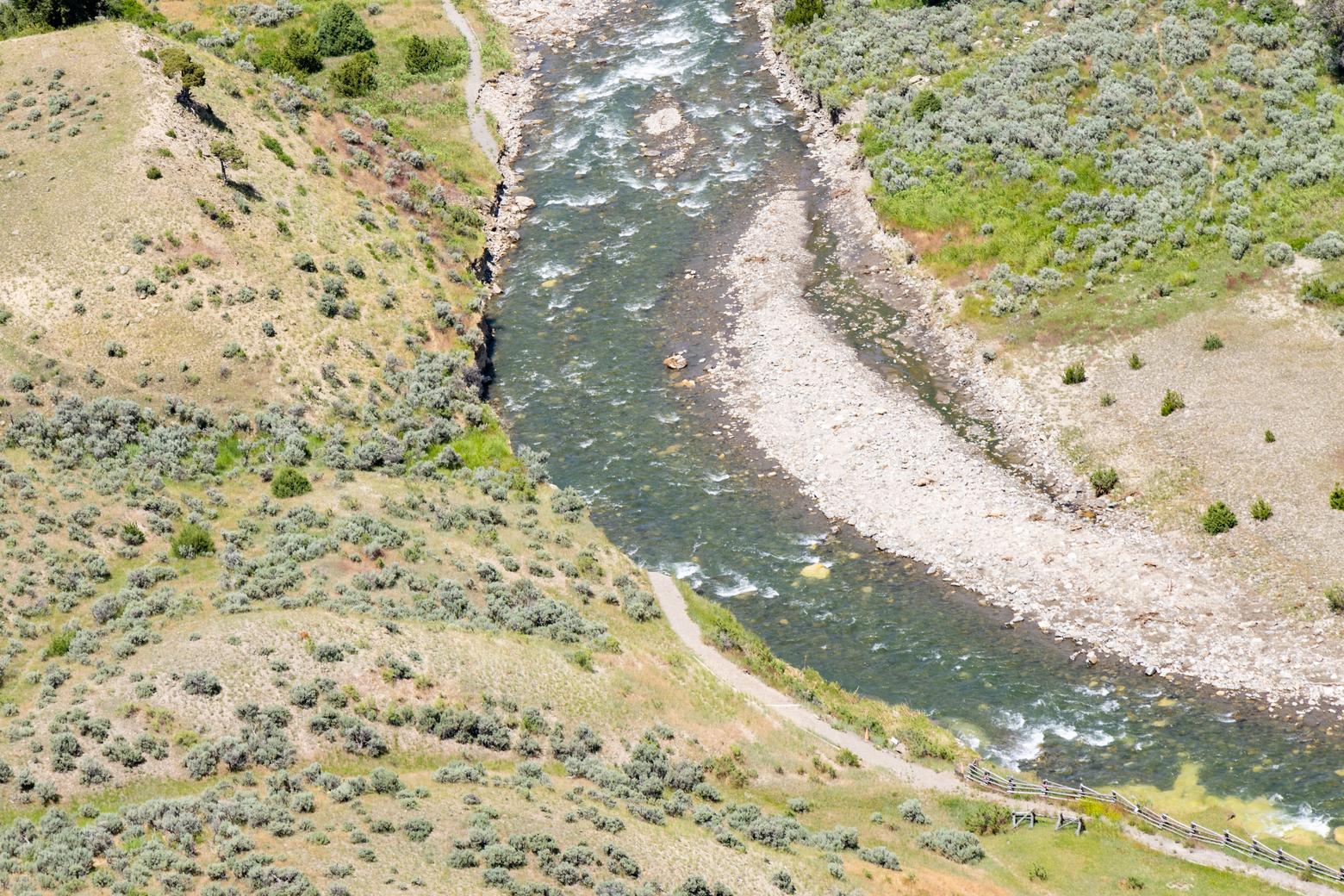 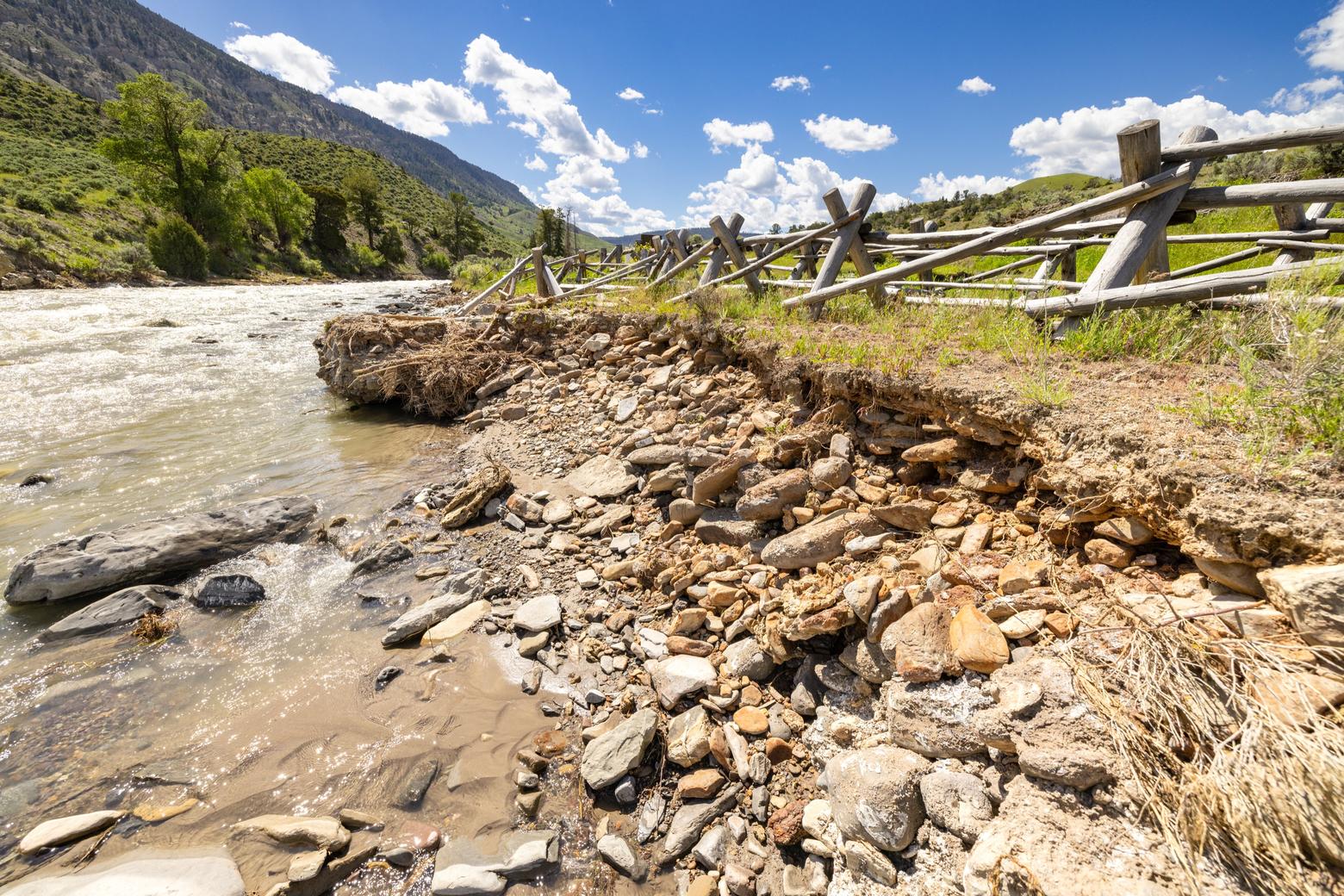 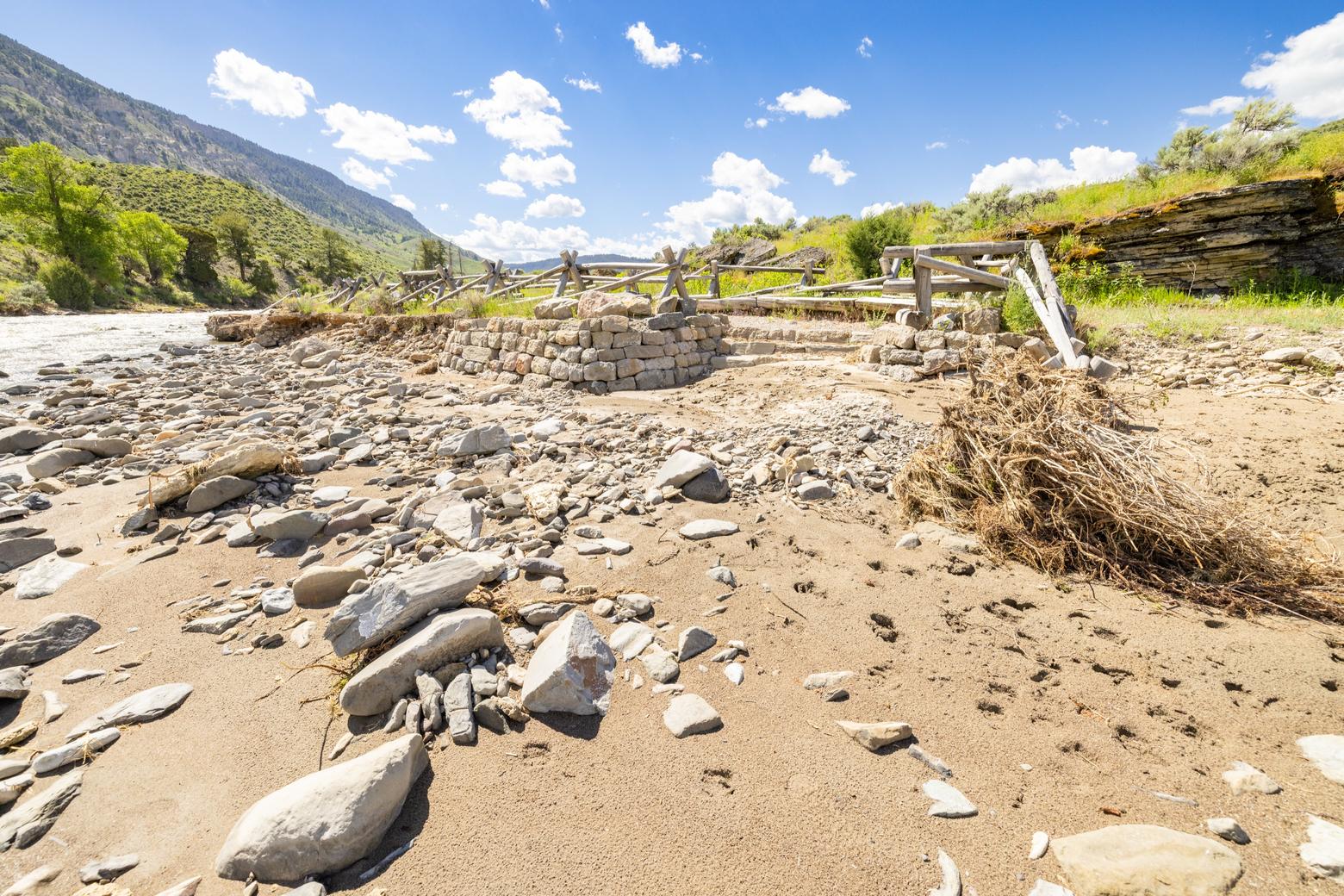 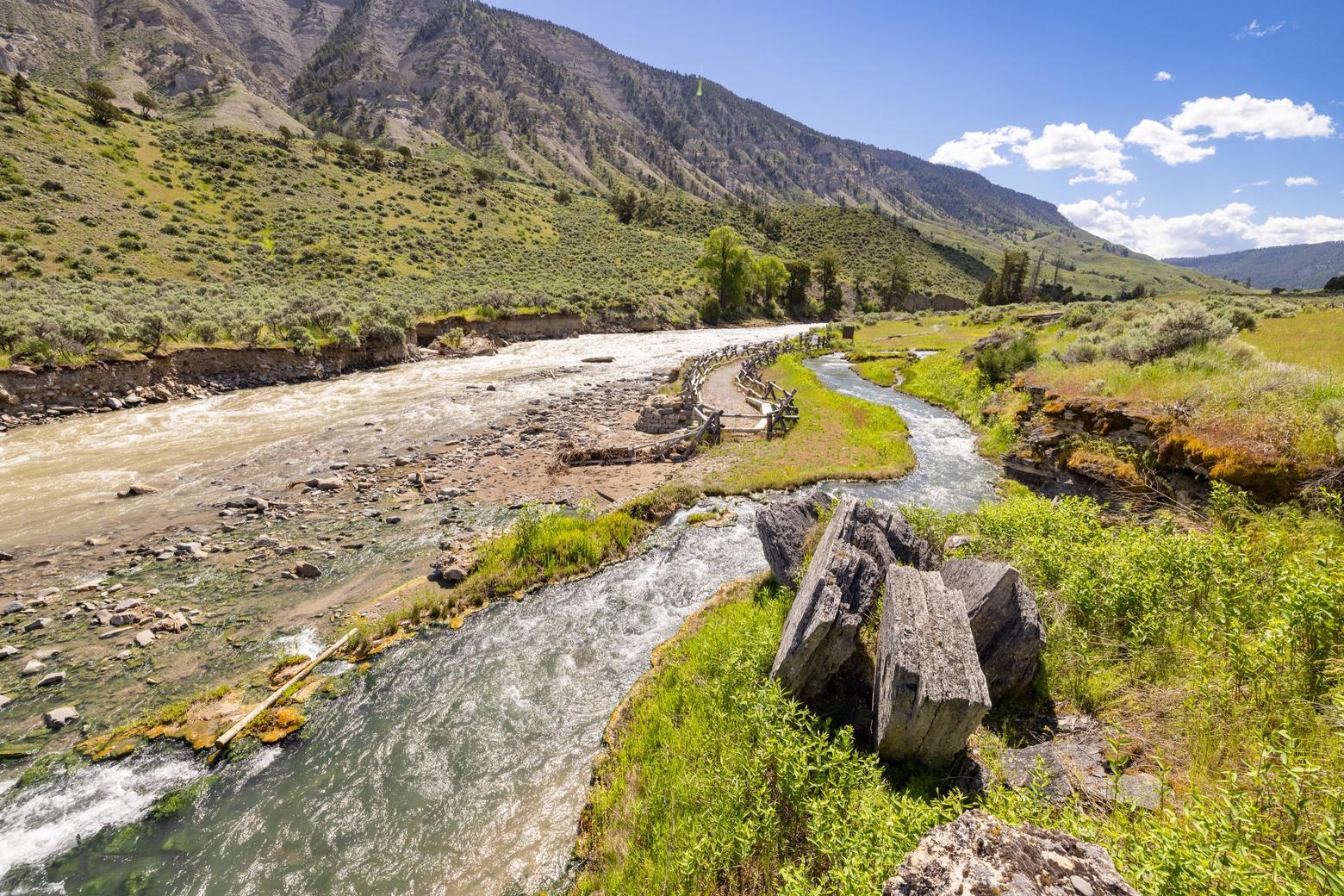 Top two images: aerial photographs show how the Gardner River changed course and how the flood washed out the hiking trail to Boiling River. Next images: flood waters pummeled the area where visitors gathered next to Boiling River. Bottom image: hot geothermal water still comes out of the ground but it does not directly spill into the Gardner River as it used to. What does the future hold for the confluence of hot water and the river, and will it be conducive for soaking again? Time will tell. All photos courtesy Jacob W. Frank/NPS
We can harm the fabric of Nature by simplifying it, tearing at it, fracturing it, even liquidating parts of it out of greed, malice or ignorance. Wildfire certainly didn’t “kill” Yellowstone. And Boiling River wasn't "killed" by the "historic" floodwaters of 2022. Eventually, a new iteration of Boiling River as a place where humans converge to soak could conceivably emerge.
The park's main north entrance road, taken out by the flood in the Gardner River canyon, used to provide access to Boiling River.  Whether a new road will be built in or near the Gardner River corridor and how that would affect access to the hotpots of  Boiling River in the future is, for now, unknown.
What we do know is that Yellowstone's hydrothermal system is constantly morphing and surprising us, as demonstrated by the erratic eruption cycle of the world's tallest currently active geyser, Steamboat, in Yellowstone.
Not long ago, when scientists released the findings of the first-ever assessment on human-caused climate change for the Greater Yellowstone Ecosystem, they revealed that sometime around 800 years ago, maybe in the 14th century, extreme drought and high temperatures radically altered the flow of water circuiting Yellowstone. It caused, for a time, what we call Old Faithful to stop erupting due to insufficient water moving through the natural underground plumbing system. Old Faithful going dormant for awhile or permanently could certainly happen again, at any time, and likely might if one of the thousands of tiny seismic events that occurs every year in Yellowstone, atop of a giant magma plume known as the Supervolcano, shakes things up.
The legendary "predictable" geyser, as it did in the 1300s, could stop erupting again later this century if temperatures rise another 10 degrees Fahrenheit, if humans keep burning fossil fuels and other things that load large amounts of carbon dioxide gas into the atmosphere and it affects “normal” precipitation in Yellowstone.
We can’t stop earthquakes but we are capable of changing the planet’s thermostat and our influence in potentially shutting down Old Faithful is just one example of how our individual action—maybe driving a gas-burning vehicle—spews CO2 that then influences the atmosphere which then influences everything else. We won’t kill Yellowstone but, again, we can destroy the very things that draw us to her, products of natural evolution that had little to do with us. We forget that many things we love most about Greater Yellowstone are the products of things we often have little tolerance for.
And the things we do inside and outside of the park can have ripple effects upon the natural things that exist without any adherence to park boundaries. Yellowstone the park is an arbitrary construct— a bellwether, a metaphor, a mirror for assessing whether we are willing to, with deliberateness, “allow” Nature to happen.
In wildlife routes and passageways—in the presence of species— are the encoded memory of wild lands and indigenous knowledge, words and a language spoken for thousands of years but then suppressed. Wildlife leads us back to a kind of connectivity with Nature we so desperately need and indigenous inhabitants understood because it was essential to their survival and, in recognition of that, their spiritual being.
Harm Nature, harm the gifts that the Creator offers, and you harm yourself. Just as Nature reminds of common chords, so too are there causes and effects.
The hot water that makes Boiling River what it is still comes out of the ground but the Gardner River has cut a different course. Will there be soaking again? Part of that depends upon what Nature has in mind.
While Nature cannot be “destroyed" by herself, again, she can have her parts thoughtlessly altered, consumed or liquidated as commodities or for human utilitarian reasons. An old growth forest, serving as a haven for wildlife, can have its biological diversity reduced by the human clearcut. Ancient salmon spawning runs can be halted by a human-constructed dam. A river can have its waters turned unlivable or toxic for living organisms by a human-dug mine that leaches waste into its flows. A wildlife migration route can be severed or squeezed and turned no longer viable by exurban sprawl.
Native, natural biodiversity is what sets Greater Yellowstone apart in today's world.
How we "use" landscapes has its most pronounced effects on animals. “If the land mechanism as a whole is good then every part is good, whether we understand it or not…To keep every cog and wheel is the first precaution of intelligent tinkering," forerunning ecologist Aldo Leopold wrote in Round River.
Why has so much wildlife diversity vanished from so much of the rest of the world? Big reasons are fragmented landscapes, species extirpation, destroyed habitat and little human tolerance for the kind of animals—grizzlies, wolves, and mountain lions we still have in Greater Yellowstone. We don’t know what the total consequences will be due to our tinkering and the fragmentation of landscapes happening right now because of human development, though we know that, for the health of people and other species, diversity matters.
When you visit Yellowstone, and see the wildlife diversity, take note of that no vacancy.  As yourself why it still exists here and what current human development trends mean.
NOTE: The above is partially adapted from Todd Wilkinson’s new book, “Ripple Effects: How to Save Yellowstone and America’s Most Iconic Wildlife Ecosystem,” available at bookstores and via Mountain Journal (mountainjournal.org).