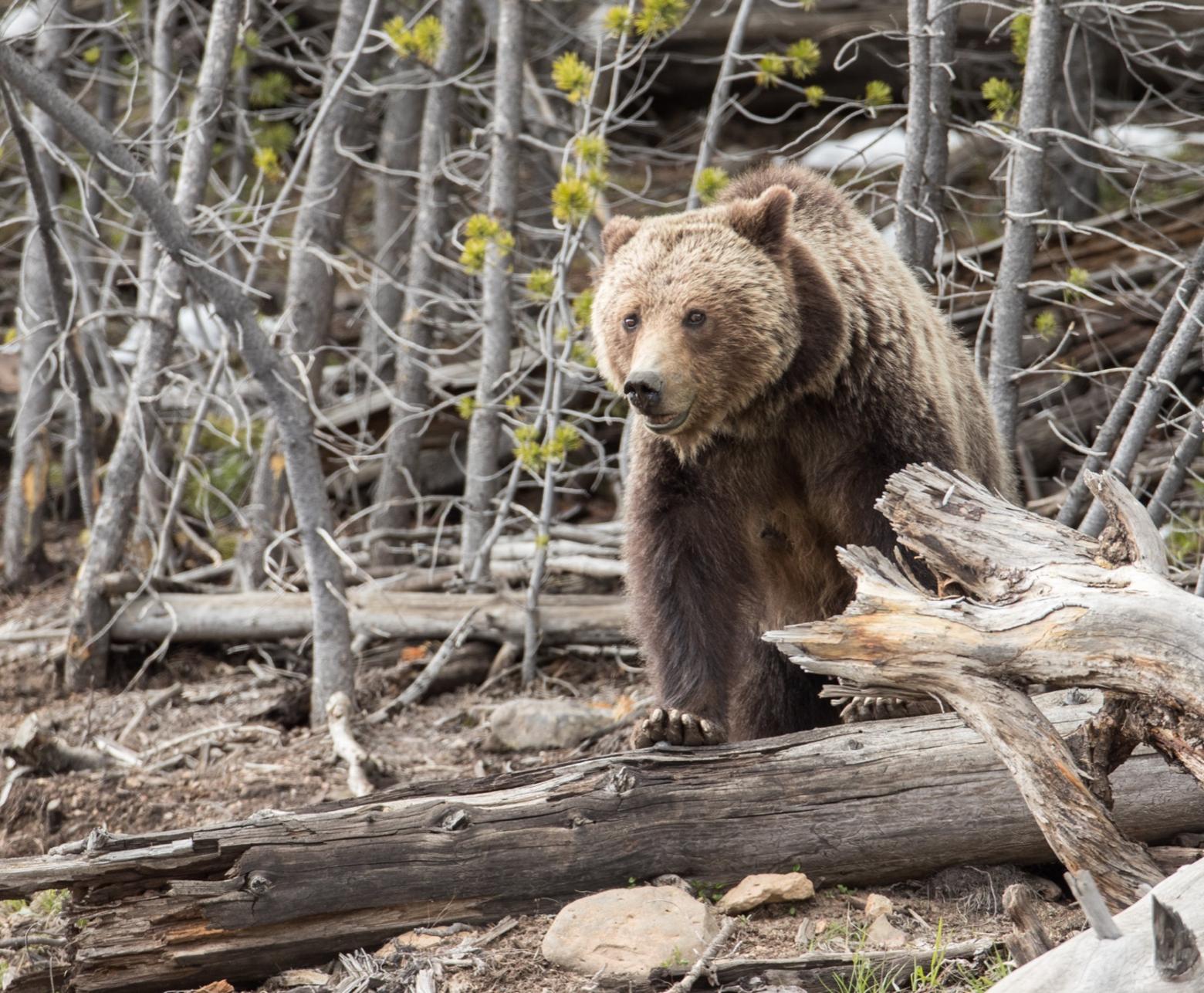 A grizzly wanders in the forest in Yellowstone. This is not the bear believed involved in the incident with the hiker. Photo courtesy Jim Peaco/NPS
A 37-year-old tourist from Missouri was injured by a female grizzly with a cub in Yellowstone National Park Monday morning while hiking along the Fairy Falls Trail near Old Faithful.
Park officials say the injured person, a woman, was hiking alone when she encountered two grizzlies at close range.  "The female bear knocked the woman down, and she sustained a scratch on her thigh," the park said in a statement. "When the visitor fell to the ground, she also received minor injuries to her face. She later declined medical attention."
The injured hiker told park investigators that she attempted to use bear spray. This is the first human injury of 2020 involving a bear in Yellowstone.
“From the injured person’s statements, this appears to be a typical case of a mother grizzly bear protecting her offspring following a close-range encounter,”  senior bear  biologist Kerry Gunther said. “Because this bear was displaying natural protective behavior for its cub, no action will be taken against the bear. Several trails in the area will be closed to give the grizzly family group time to clear from the area.”
Again, this is the first incident of a  bear injuring a visitor in Yellowstone in 2020. The last time a bear injured a visitor in the park was in June 2019, when a black bear bit into an occupied tent and bruised a woman’s thigh.
In late May, a mountain biker riding near Big Sky was severely mauled by a grizzly and in Henrys Lake State Park, Idaho, another man was mauled after encountering a mother grizzly with two cubs. Two weeks earlier, a man looking for shed antlers was mauled by a female grizzly east of the Wyoming town of Dubois. That bear was killed during the encounter.
At the beginning of May another man looking for antlers was also mauled during a surprise encounter with a grizzly northwest of Cody. In that case, the bear fled after biting into a can of bear spray holstered on his hip. The incident was the first in Wyoming in 2020 but it followed 2019, a year known for being the first in a decade in which a person was not injured by a grizzly in the state.
Reminding readers here that wildlife in Yellowstone are wild, park officials strongly recommends that hikers be in groups of three or more, carry bear spray, be alert and make noise on the trail. For more information on how to move safely in grizzly country, click on this link. When animals are near a trail, boardwalk or parking lot, visitors are advised to give them space. Park regulations require that humans should stay 25 yards (23m) away from all large animals—bison, elk, bighorn sheep, deer, moose and coyotes—and at least 100 yards (91m) away from bears and wolves.