The Power Of Words: How We Use Language To Justify Our Consumption Of Nature 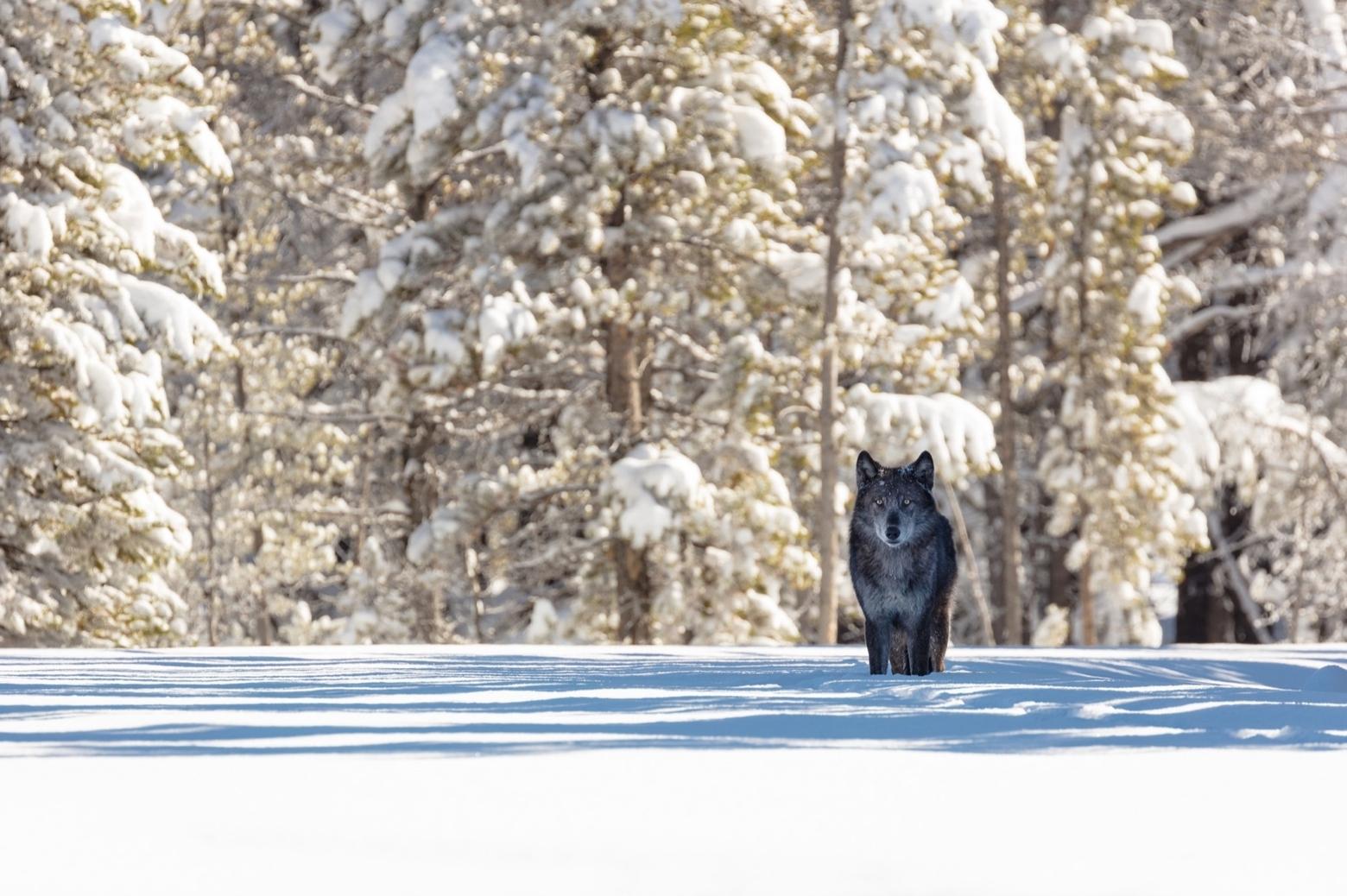 Susan Marsh asks: why is it that if a wolf preys upon a native wild ungulate, or even a domestic calf or sheep, it is called a cold-blooded killer, yet when a human hunter shoots an elk it is considered a "harvest" or when thousands of beef cows are sent to slaughterhouses little thought is given, in language, to the truth that those animals are involuntarily giving up their lives to feed humans? Photo of wolf in Yellowstone courtesy Jacob W. Frank/NPS
Sometimes all I have
are words and to write them means
they are no longer
prayers but are now animals.
Other people can hunt them.
…A tanka by Victoria Chang (from Narrative, February 2019)
The words we use.
Lately I’ve been wondering about how carefully we choose the words we use and whether we consider the implications and hidden baggage they carry. Subtle nuances we grew up hearing stick with us for life. Sometimes they are not so subtle and stick like pins in a voodoo doll. Sometimes they live through the ages and invade our collective belief system, the way we unconsciously agree that the sky is blue.
Frederich Nietzsche wrote that “A uniformly valid and binding designation is invented for things, and this legislation of language likewise establishes the first laws of truth.” [On Truth and Lie in an Extra-Moral Sense, 1873]. We can’t speak truth without submitting to authority (the dictionary) by which we agree on the word that signifies our meaning. We say the sky is blue, but the words sky and blue are cultural constructions. 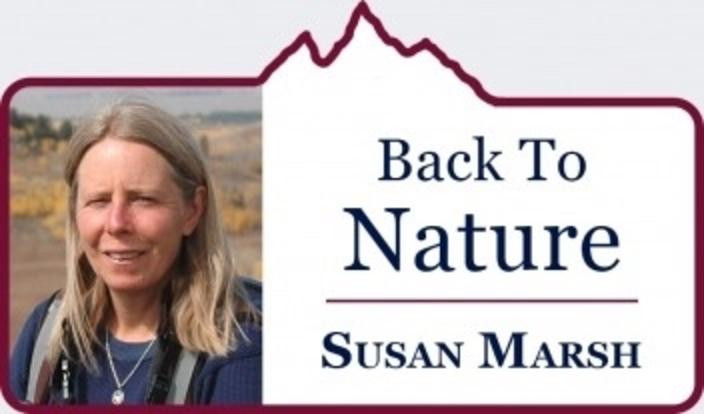 In the sciences, we discover truth—until we find out something new, then we cast that adjusted knowledge into stone until the next drop of understanding leaks in. The way we look at the universe is an example: we’ve gone from believing the earth was at its center—and assassinating anyone who thought otherwise—to understanding that our solar system is on the trailing edge of a small galaxy, one among zillions. We are even able to admit that there’s a lot more going on out there than we can imagine.
Yet the truth eludes us if we’re not careful, in part because of our invented language for things. Nietzsche continues in his essay with what he might call the anti-truth: “The liar is a person,” he writes, “who uses the valid designations—the words—in order to make something which is unreal appear to be real.”
Our culture is shot through with lies we agree to accept as if they were the truth. We call it obfuscation, a way of lying to ourselves and coming to believe what we say. Most of us can sniff out deception in the way government and institutions invent euphemisms to hide rather than reveal what they are really talking about. How often do we unconsciously incorporate these terms?
I consider as an example the way we speak about the natural world. By “we” I mean people of the Western tradition, influenced by the likes of Rene Descartes. He called himself rational but denied an obvious and observable truth, that other species are sentient, intelligent, and in possession of emotions. He argued that animals lacked a soul or mind, and therefore had no emotions and could not feel pain. Unfortunately his views became prominent in Europe and North America, allowing people to treat animals as property, not other beings with whom we share this world.
How convenient. We shop for pork and beef without thinking about the suffering that brought animals to our tables. We let unwanted pets out the door and drive away. We deny any hint of kinship by referring to an animal as “it” instead of he or she.
My computer’s grammar police underlined the word whom at the end of the last paragraph. It wanted me to substitute which.
Let’s hope we’re becoming more enlightened about the status of other species as we learn how intelligent they are, from whales to ravens. On second thought, perhaps not. In Wyoming it’s still a time-honored sport to run down coyotes with snowmobiles.

Let’s hope we’re becoming more enlightened about the status of other species as we learn how intelligent they are, from whales to ravens. On second thought, perhaps not. In Wyoming it’s still a time-honored sport to run down coyotes with snowmobiles.

Genome sequencing has placed us in the midst of the pantheon of earthly life: we share 99 percent of our genes with chimps, 90 percent with mice, and 84 percent with dogs—presumably including coyotes. A billion year old ancestral life form that gave rise to both plants and animals left us each with commonalities in our genomes. At last our rational science is helping us catch up to so-called primitive peoples and centuries-old cultures which hold that we are part of the world and all living things are our kin.
In the Western tradition we still use language to set ourselves apart, to create the illusion of superiority. Nowhere is our Cartesian reluctance to acknowledge the individuality of other life forms more prominent than in the lingo of forestry and wildlife management agencies and the land grant colleges that graduate their employees.
We don’t cut down mature lodgepole pine trees; we harvest timber. Even the tree itself is known by foresters as “standing volume” rather than a component of a complex ecosystem which provides food, shelter and oxygen to myriad species. The term ignores the complexity of the tree, an ecosystem of its own, as well as its interdependence on all that surrounds it. “Volume” refers to nothing more than the board-foot, the number of slices 12 inches square and an inch thick that are estimated in a timber stand.
I don’t argue against using lumber. We live in houses. But we treat forests like we do beef cattle, as a lifeless commodity. Private forest-product companies are at least honest about their purpose: they call their forests tree farms.
Those who create useful and beautiful things from wood, who select and cut a tree from their property or a neighbor’s and use it for an object of quality and endurance show a different attitude. Those who cut their own firewood remember and thank the tree whenever they set a log on the fire. 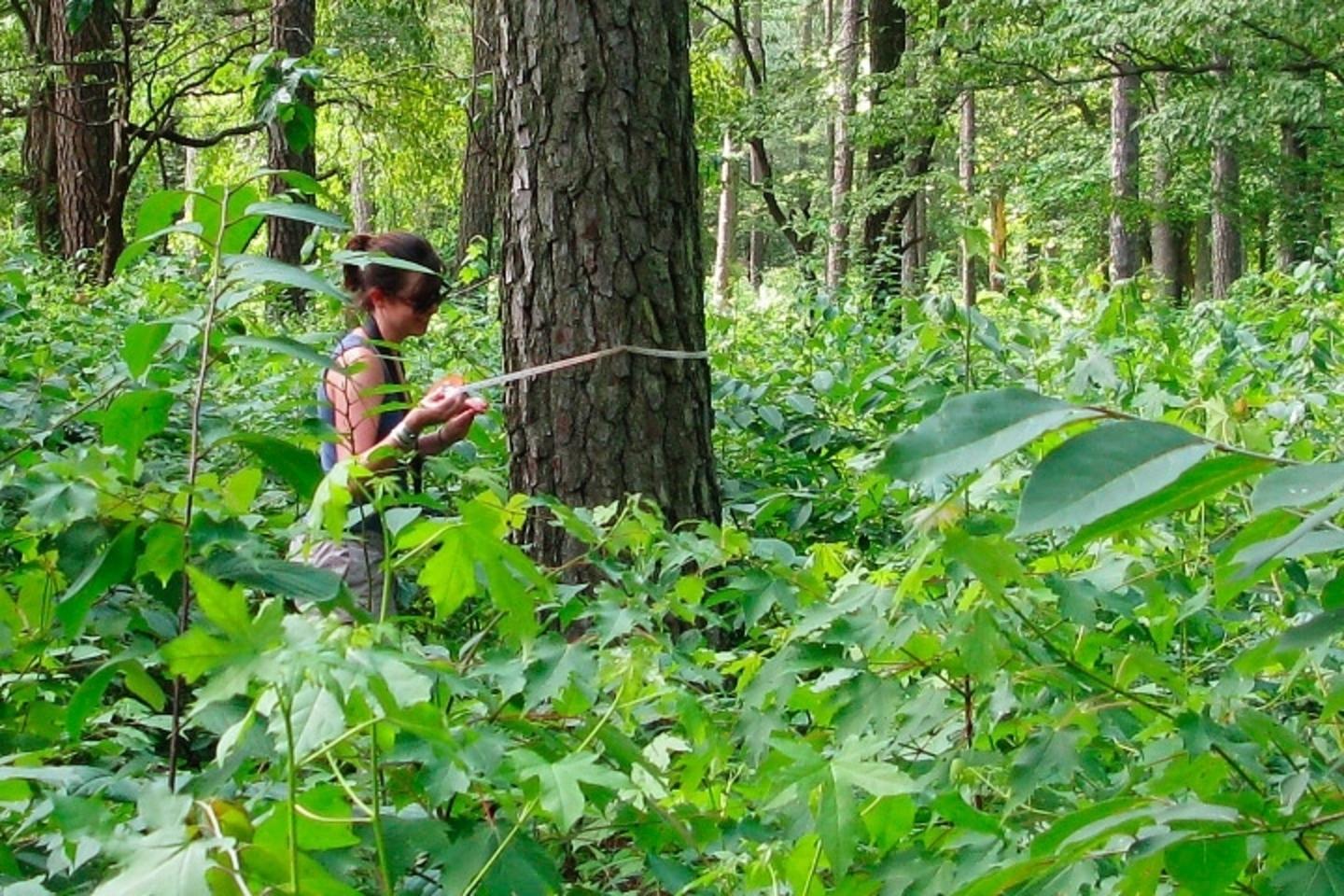 We’ve created a culture insulated from wild nature, encouraging us to stop caring that we are adrift. We speak of the land, forests, and wildlife not as aspects of home but of natural resources. We give serious consideration to colonizing the moon or even Mars rather than try to clean up the mess we’ve made of our own planet.

A shared behavior isn’t the same thing as a false attribution of human traits to others. I walk, my dog walks. Do we walk the same way? No. We each do what we do in our own way but there are many things we share, in addition to a good number of our genes, which help us relate to pets and wildlife alike. Seeing ourselves in others, whether people or other species, is the basis for empathy.
How do we unravel the words used to describe, name, tell the truth or tell lies? How do we keep a sharp ear for the subtleties of words that don’t quite hit the mark? And most of all, how do we salvage a scrap of humility as a species whose interactions with other forms of life usually place us on top? We place ourselves above other people as well, in cultures old and new. We areThe People, the chosen ones, the ones whose creed is the only true religion.
We’ve created a culture insulated from wild nature, encouraging us to stop caring that we are adrift. We speak of the land, forests, and wildlife not as aspects of home but of natural resources. We give serious consideration to colonizing the moon or even Mars rather than try to clean up the mess we’ve made of our own planet.
These are diversions, as dangerous as the euphemisms used to distance our relationship with animals and trees. Understanding what we really mean to say requires us to slow down, be more deliberate, seek to communicate and connect. To witness what is before our eyes before we open our mouths.
“If an animal does something, we call it instinct; if we do the same thing for the same reason, we call it intelligence.” - Will Cuppy
EDITOR'S NOTE:  Mountain Journal congratulates Susan Marsh for being honored with the Raynes Citizen Conservation Award given by the Northern Rockies Conservation Cooperative at its 2019 Wildlife Symposium in Jackson Hole. The award, created in honor of naturalists Bert Raynes and his late wife, Meg, recognizes citizens who have made significant contributions to advancing public understanding and appreciation for the natural world. 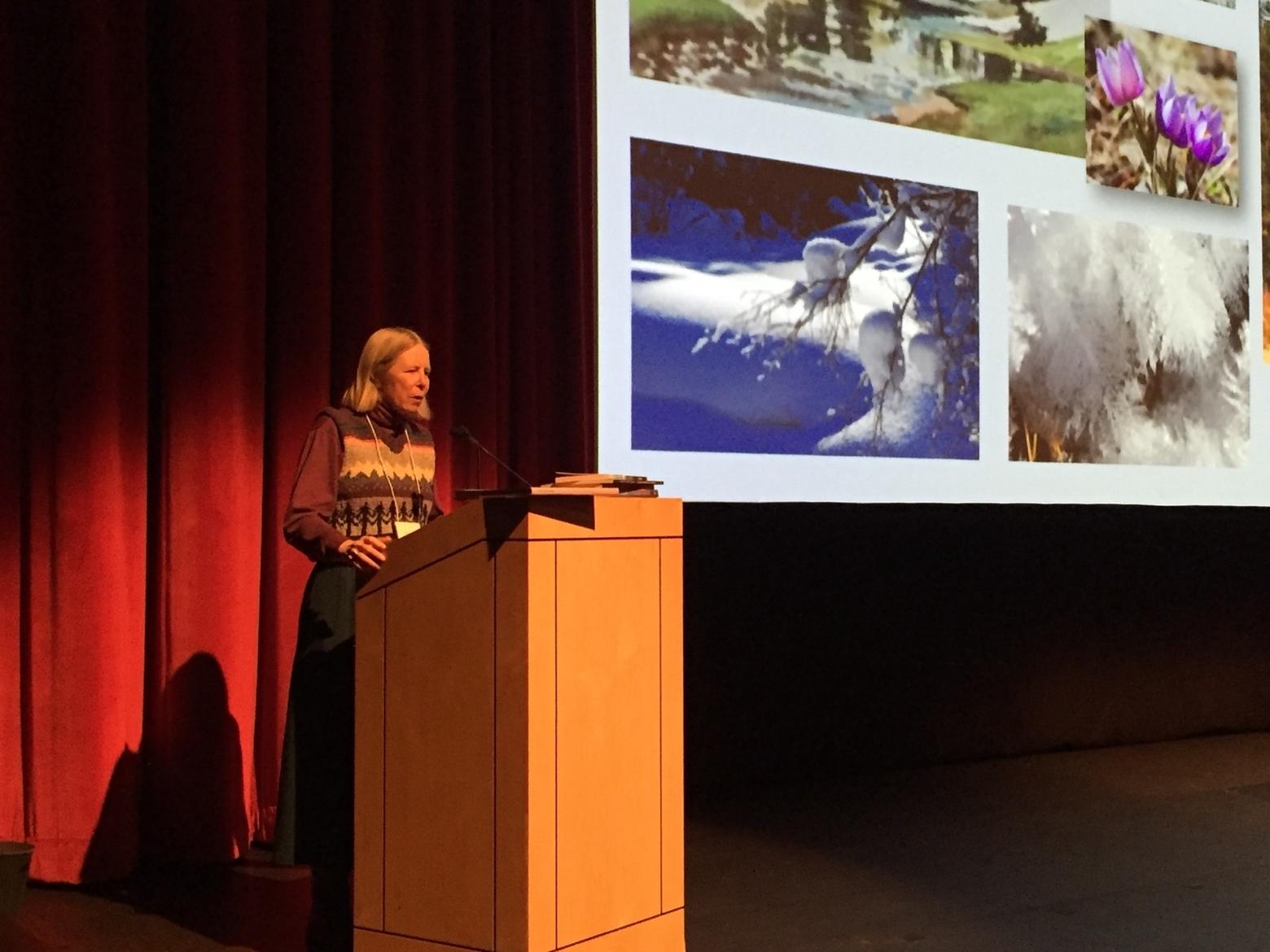 Marsh, whose art is at right, shares some thoughts after receiving the Raynes Citizen Conservation Award at the 2019 Northern Rockies Conservation Cooperative Wildlife Symposium in Jackson Hole. Photo by Todd Wilkinson

Increase our impact by sharing this story.

GET OUR FREE NEWSLETTER
Never Miss A Big Story!
Tags: Susan Marsh, Back to Nature

Some Call Her 'The Owl Whisperer'
Ashleigh Scully is a rising Millennial star in wildlife photography. Enjoy a Mountain Journal interview with the conservation-minded phenom
Read
Opinion, Public Lands

The Lords Of Yesterday Are Back And They Want America's Public Land
Barry Reiswig—a backcountry horseman, hunter, angler and former civil servant —pushes back against what he calls "the radical agenda" of Interior...
Read
Back to home