Book review: Researcher's new riveting memoir takes us back to a fateful day in 1977 when mauling in Gallatin Mountains of Yellowstone brought him global attention 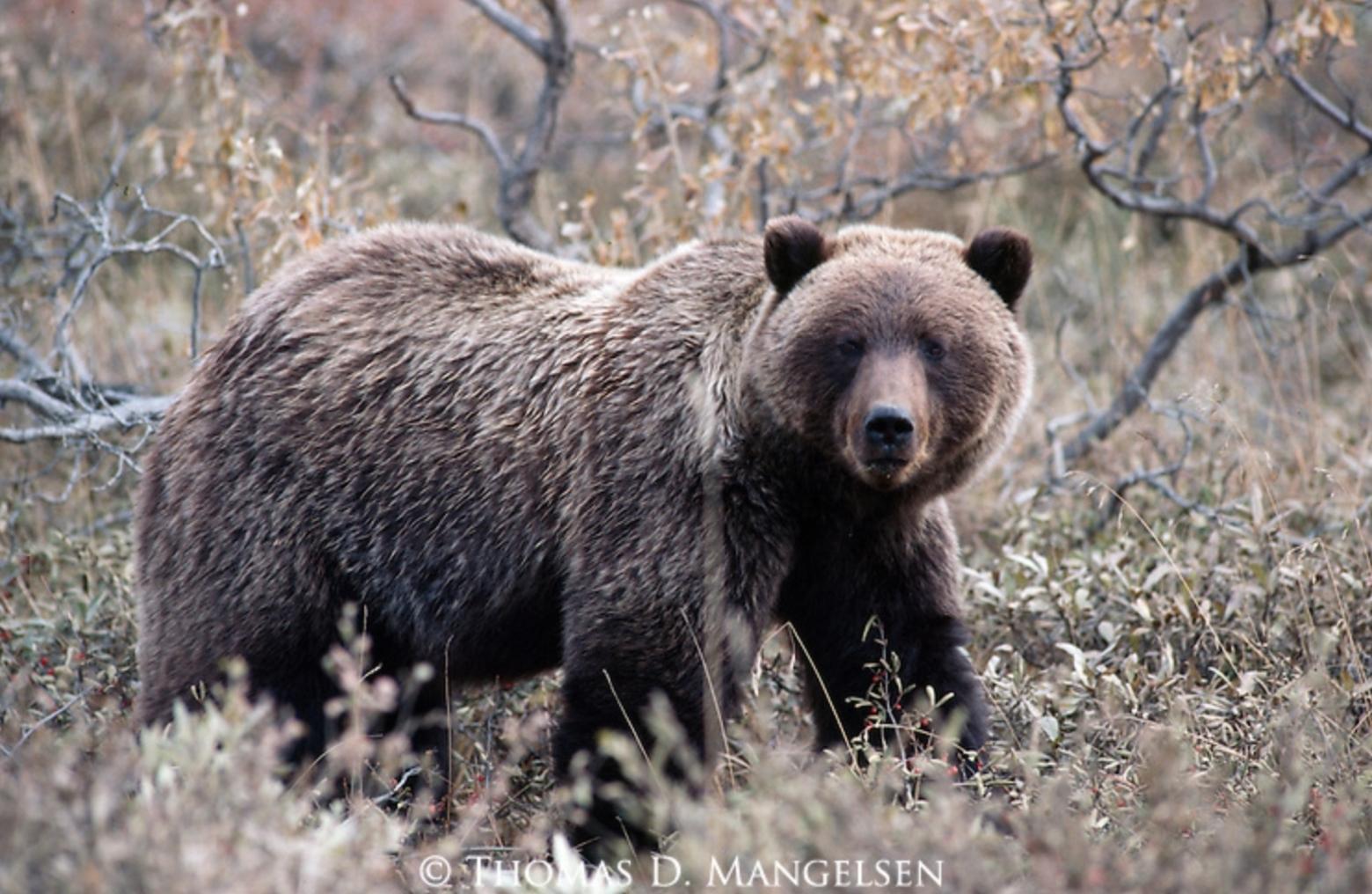 A Greater Yellowstone grizzly descended from among the140—or fewer— that remained when the bear was given federal protection in 1975. Photo courtesy Thomas D. Mangelsen (mangelsen.com)
“Our modern relationship with the grizzly bear reflects either an appreciation for or apathy toward nature. Is it still possible to find a path back, to watch a grizzly with wonder in untrammeled lands? What are the waypoints on this journey that guide the grizzly’s future?”— Barrie K. Gilbert

For a time, a span that to him still seems like an eternity, Barrie K. Gilbert was the most prominent survivor of a grizzly bear mauling in the Greater Yellowstone Ecosystem.
The story of his grim encounter, which happened in 1977 as he and a colleague were hiking through the rugged Gallatin Mountains in Yellowstone Park’s northwest corner, made news around the world. Ironically, the incident only energized Gilbert’s ongoing work as a wildlife researcher studying the ways bears respond to the presence of people.
Now, four decades after a few minutes on Crowfoot Ridge changed his life, Gilbert has written a memoir, a long-awaited 250-page tome titled One of Us: A Biologist’s Walk Among Bears. It’s the first time he has made sense of the attack in his own words but most importantly, it’s the introspection he offers today, as an 82-year-old, that is worth our attention.
Gilbert’s scientific background, him enduring a near-fatal attack and his thoughts on bears in the 21stcentury give him a kind of unparalleled street cred.
His mauling happened just two years after grizzlies in Greater Yellowstone were listed as a threatened species under the Endangered Species Act.  At the time, estimates were that only 136 individuals, and possibly fewer, remained in the ecosystem, with the vast, vast majority finding refuge, free of sport hunting inside Yellowstone Park. 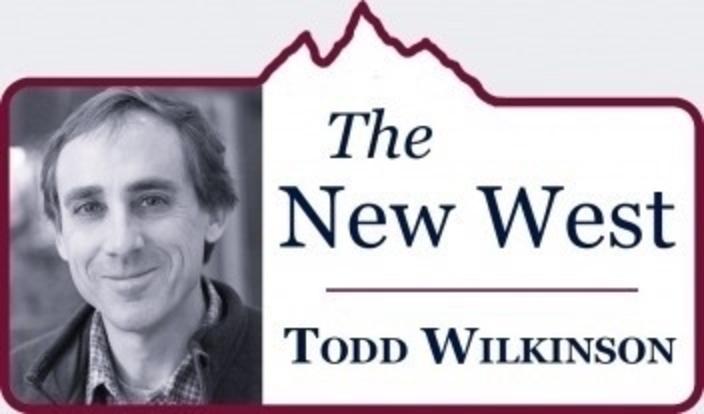 Gilbert praises the progress that has been made in slowing habitat destruction and reducing the number of lethal conflicts that resulted in a lot of dead bears. Yes, he says, there are many more on the landscape today and they’re in more places than they’ve been in a century, but what does relative "abundance" mean and what is it in comparison to?
In light of human population and development pressures pushing to the very edge of public lands, climate change already affecting key foods, and more people recreating in bear habitat, the future for grizzlies is at best uncertain. Bears need all the space we’re willing to give them, he says.
Every day Gilbert is reminded of the attack. He carries the scars of disfigurement and he lost an eye, the result of the protective bear mother biting into his face. (You can read an exclusive excerpt of his book, in which he recounts details of the mauling by clicking here). 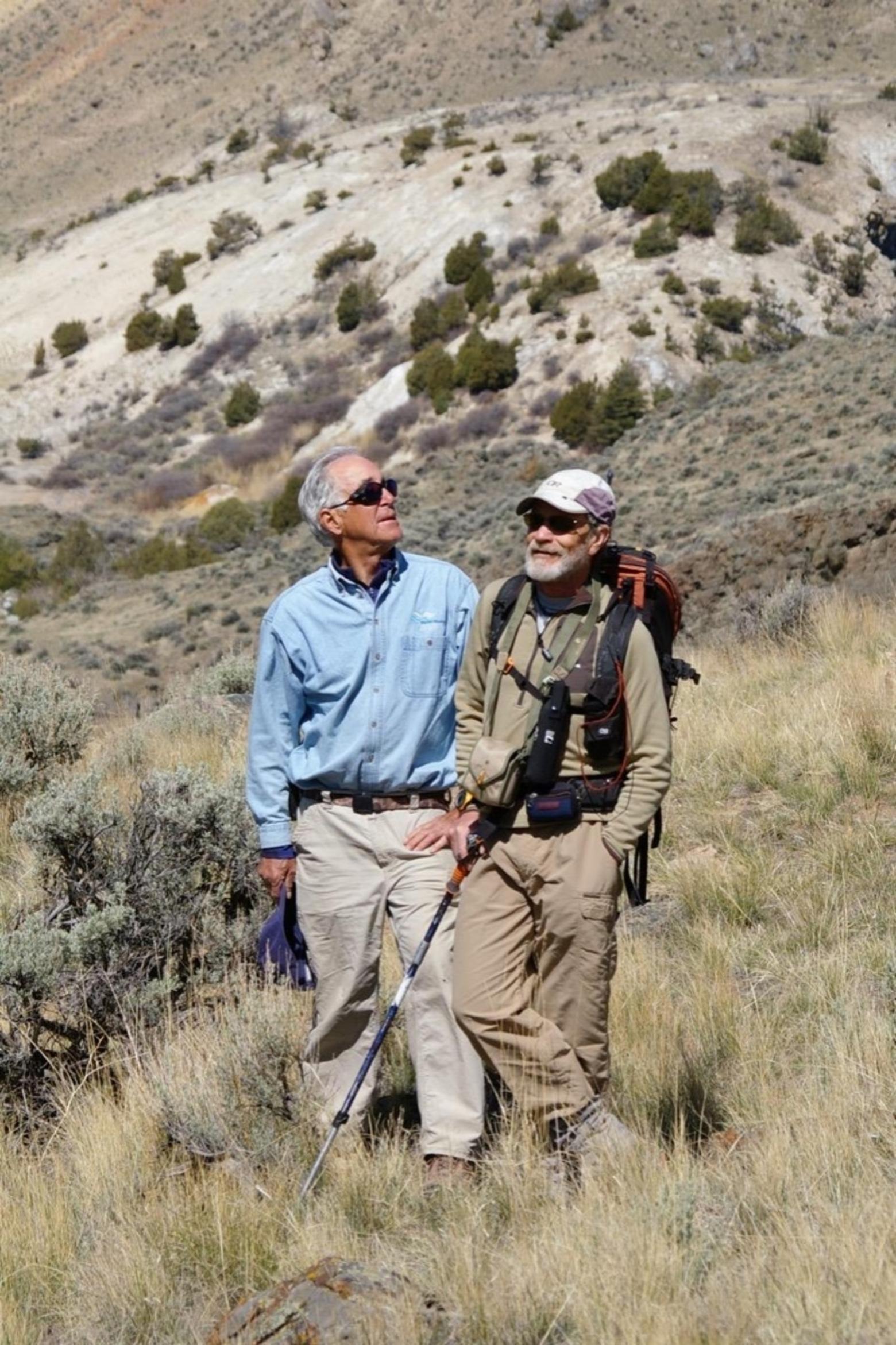 Gilbert and friend, retired Forest Service entomologist Jesse Logan who is an expert in identifying the correlation between rising average temperatures and the loss of whitebark pine to outbreaks of mountain bark beetles, drought, and fire on top of a pathogen called blister rust. Whitebark pine produce nutritious nuts in their cones that grizzlies love to eat and help keep them healthy. But whitebark pine have rapidly disappeared, causing grizzlies to seek other sources of food putting them in conflict with people. Here, Gilbert and Logan hike along the Yellowstone River corridor looking for bears. Photo courtesy Barrie Gilbert
Amid the decades of the 1970s and 1980s when rural Westerners questioned the rationale for recovering grizzlies, Gilbert was invoked as prima facie evidence.  He laments how the media and the carnivore-loathing public cited his case to claim that grizzlies wander around as unpredictable bloodthirsty killers and serve no useful purpose, except to become trophies for sport hunters.
He got swarmed by journalists who penned sensationalistic fear-mongering narratives ripe for supermarket tabloids. "I found this exploitive, invasive and thoughtless," he writes. "One final indignity came when a Montana photographer stuck her camera in my face when I had removed my glasses, which had an eyepatch attached. Her editor published a story, front page, with a close-up of my disfigured one-eyed face. True to form, the newspaper did not ask my permission to publish the picture. My education was gaining momentum."
What most reporters failed to discern was the misinformed way they portrayed him, he says.  Far from holding a grudge against the female grizzly mother that easily could have taken his life, Gilbert is a fierce advocate for bear conservation. As he was being evacuated to Lake Hospital in Yellowstone, he pleaded with park managers not to destroy the bruin.
Were he given the chance, would he have changed the way he did things on the day of his bear encounter? Most certainly, he says.  But would he rather that the bear and her offspring not have been there in the wild roadless Gallatins? Absolutely not, he notes. 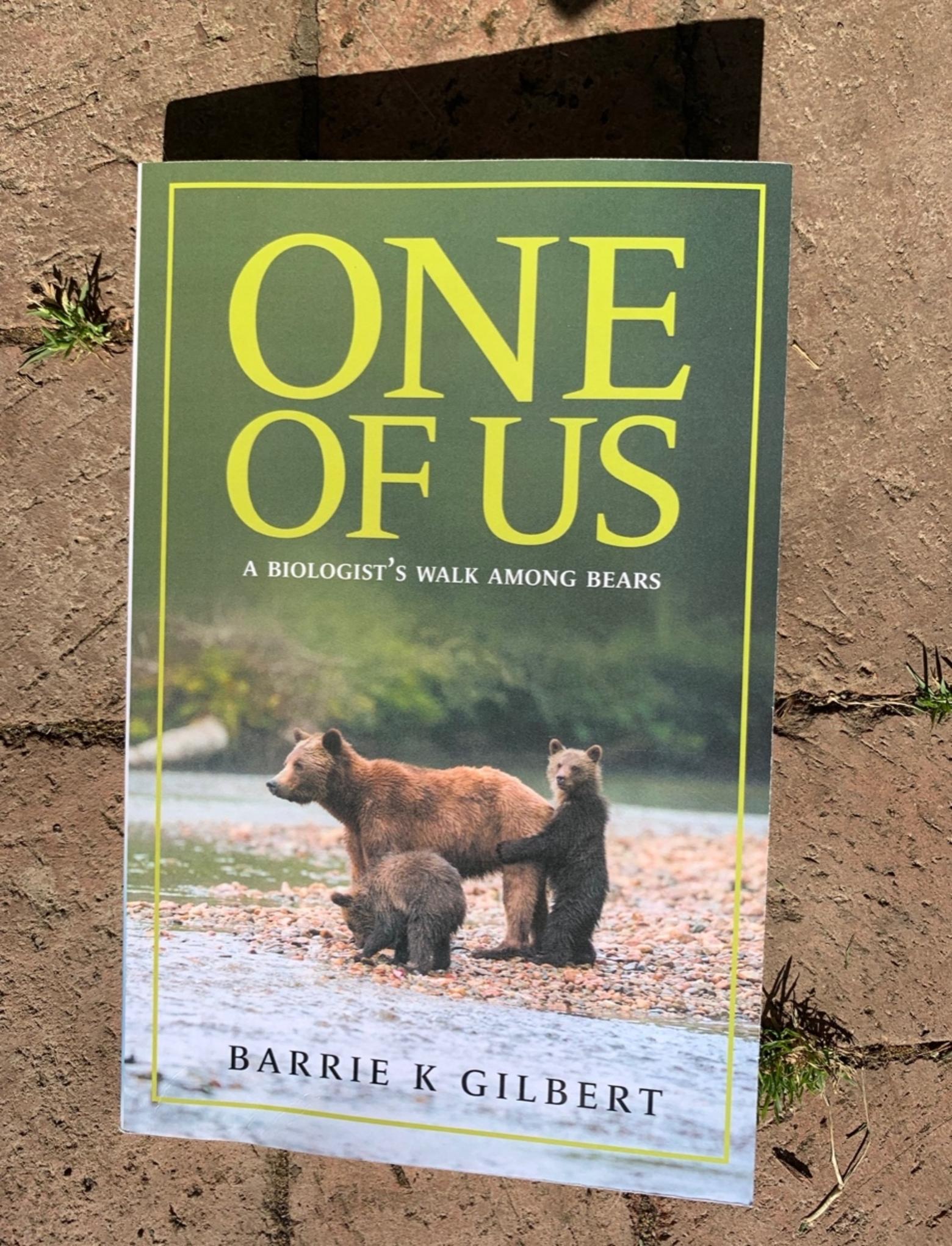 “One of Us” also covers the years Gilbert spent in Yosemite studying black bears and in Alaska along the Brooks River, observing the annual convergence of brown bears drawn to spawning salmon in Katmai National Park where hordes of people show up to photograph them.
“Shoot a bear, and only one person takes a skin home,” he writes. “ Protect that bear, and a thousand people can enjoy it alive, learn something, and have an experience and photographs to last a lifetime.”
Still, warning about affixing a price to wildlife in order to justify its protection, he provides a critical analysis of how the federal government proposed building a massive bear-watching platform in Katmai that changed bear behavior.  He shares how we can move more safely through bear country and argues for safeguarding as much unroaded terrain as possible, including the Gallatin Range between Yellowstone and Bozeman because it can buffer the effects of more people pouring into Big Sky and Paradise Valley, Montana.
In his chapter, “Hunting the Great Bear,” Gilbert discusses the pros and cons of killing “surplus” grizzlies for sport and he references the decision to halt grizzly hunting in the Canadian province of British Columbia which has roughly 14 times more grizzlies than exist in the entire Lower 48.  The hunt was extremely controversial, particularly with outfitters guiding high-paying clients to salmon streams where huge bears gather. 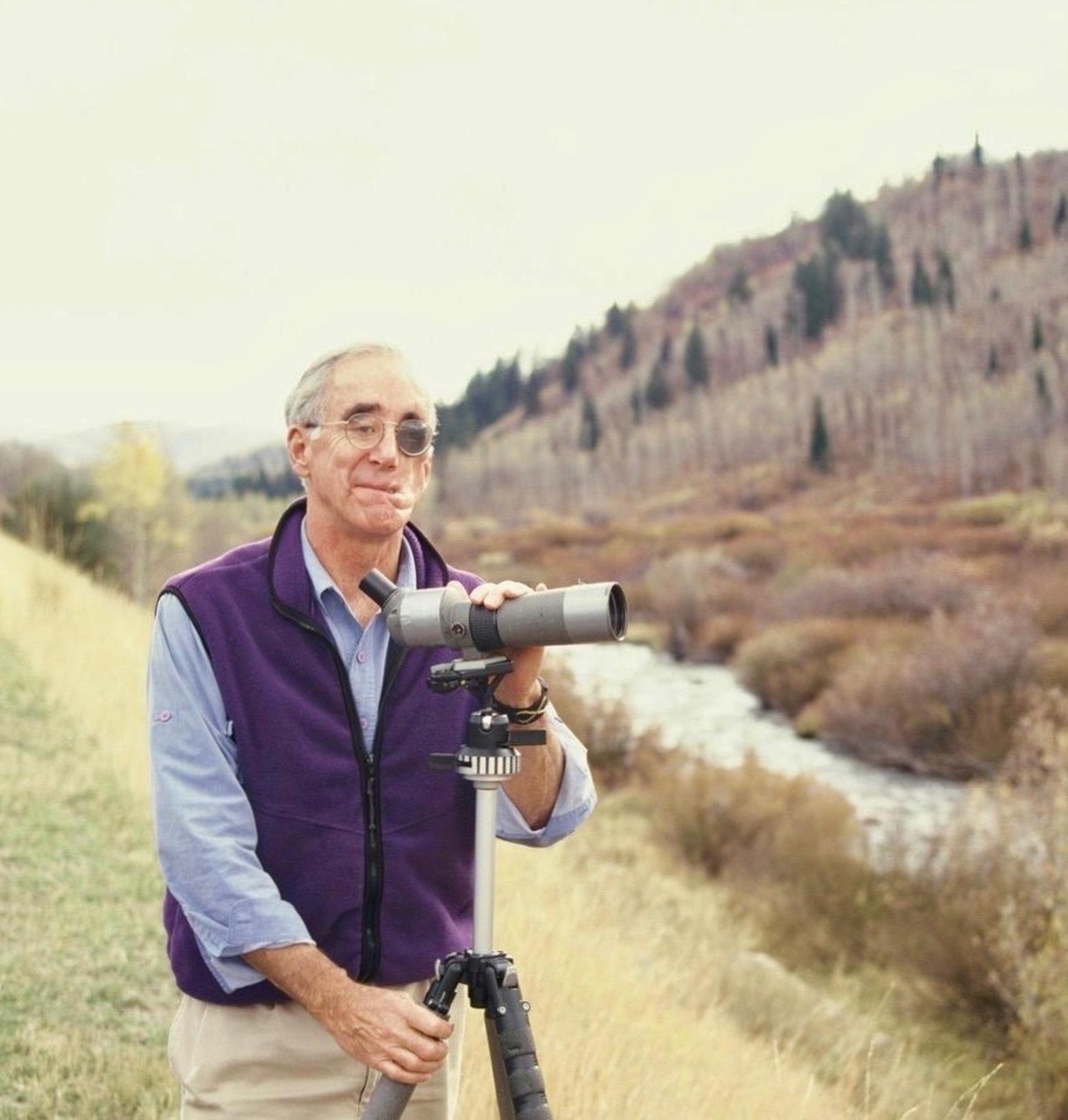 Gilbert, even at 82, still goes spying for grizzlies whenever he visits Greater Yellowstone. Grizzlies need space and places that can support grizzlies support many other species, he notes. On landscapes there are lots of places where people can go but only a relative few where grizzlies can persist. Photo courtesy Barrie Gilbert
“Bloodlust and appeals to the mythic ‘ancient hunter’ in our DNA have given way to the need to halt the global extinction of top carnivores and highly social mammals,” he says. “Wild land is the home of grizzlies and an umbrella for other threatened animals and plants.”
Gilbert notes that chimpanzees, mountain gorillas, elephants, wolves and sharks were also sport hunted as trophies for display but research that has revealed their intelligence and complex social behavior has led to public attitudes shifting from demonization to empathy and appreciation.
If attitudes are ever going to change in the West, Gilbert says, it must start with shedding the frontier mentality that looked upon nature as only being there for the plundering.
“First, we should confront wrong-headed language like ‘natural resources,’ which labels and treats remaining wildlife and natural forests as economic commodities instead of reservoirs of beauty, solitude, and quiet values,” Gilbert writes.
“Wildlife management has become game farming, while national parks policy gurus have acquiesced to intrusive recreation, such as commercial rafting and mountain biking, and failed to protect wildness and wildlife,” he adds. “‘Resources’ is a vague, outdated concept flowing from another mind swindler, ‘multiple use,’ a term that subsumes and satisfies our addiction for giving a little something of economic value to everyone.”
Gilbert says when everyone is encouraged to take a piece of the natural world for themselves, nothing in the end is sustainable, not least of which, a grizzly. Bears aren’t just part of rare remaining wild landscapes, he adds; they’re ultimate extensions of it. 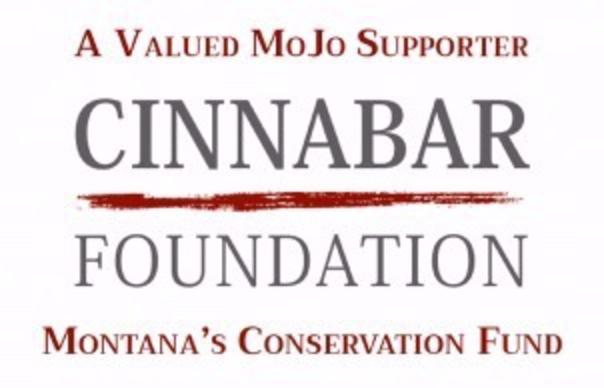 EDITOR'S NOTE: This story is part of an ongoing series called "Those Who Faced A Challenge And Did The Right Thing," with research underwritten in part through a grant by The Cinnabar Foundation.