Back to Stories
Culture

On the high plains of the American West where four or five generations of land tenure carries the weight of greater credibility and social standing over that of newcomers, Lois Red Elk-Reed remains unassuming even in irony.
With several published volumes of critically-acclaimed poetry and children's stories to her credit, as well as a few Hollywood film roles and an adjunct professorship, it was never her primary intent to assemble a curriculum vita she thought would impress others.


What she’s valued most is doing right by the heritage, dignity and sacrifices of her elders.


Red Elk-Reed is indigenous and she spells the word with a capital “I”. “Being Indigenous has to do with blood and language. Your blood is your birthright and your language guides you. Indigenous blood carries genetics, memory, ghost and spirit,” she once explained. “The Indigenous language is the same language as the universe, Earth, everything that grows on the Earth and all animals. Language encodes our ceremonies. It is sacred. To be Indigenous is a lifetime experience and one has to be responsible to their life. One cannot drop in and out of their Indigenous life anytime they wish. Neither can the language be used and misused for convenience or be exploited.”
Based upon the convention of modern geography, Red Elk-Reed could be described as a western woman, but that isn’t how she first identifies. She is Lakota/Dakota and it’s a nation older than any of the 200 nations that hold membership in the UN.
Her reference to homeland, “Makoce”, pertains to a special Lakota/Dakota region, and there is no English equivalent, she notes. “Makoce” comes from the Dakota word for Earth—maka. “The name refers to the land as mother, family, all that is in the world, and the interdependency of all living things,” she says.


As a self-described “organic poet,” her ties to North America do not emanate from a written text. Across hundreds and hundreds of generations, the knowledge she’s inherited has come to her though spoken words—the essentials encoded in stories dating to when the first people walked the continent. "I find that in the Lakota/Dakota culture and language there are solutions to every problem we may have in our lives," she says.


Behind the scenes, from her home at Fort Peck, Montana, Red Elk-Reed has been tirelessly devoted to preserving her culture, making traditional quill and beadwork, being a traditional dancer, practicing botany as it was taught to her by her grandmother, and teaching the dialect of Nakota at the local high school and introductory Dakota at the community college.


Red Elk-Reed’s influence has extended far beyond Fort Peck. Quite literally, it has shaped the way native people are portrayed to millions who consume mass media for information and entertainment.


While still in her 20s, she headed to Los Angeles to help her sister with child rearing and then realized the dream that many have of being “discovered” by Hollywood.


In a profile that appeared at Sovereign Bodies, poet Tiffany Midge offered this description of Red Elk-Reed: “During her earlier years living in Los Angeles, she was a TV talk show host, an FM radio host at Pasadena City College and a technical advisor for many Hollywood film productions. She has been a member of the Screen Actors Guild and the American Federation of Television and Radio Artists for 40 years while working for all the major networks and Hollywood studios in film and television. She has worked as a freelance writer for her tribe’s Native newspaper and authored a weekly column titled ‘Raised Dakota.’


Notably, Red Elk-Reed had roles in the movies “Skins” and the film version of Mary Brave Bird’s moving memoir “Lakota Woman” that chronicles events that shaped the American Indian Movement during the 1970s. Red Elk-Reed credits Ted Turner and Jane Fonda for insisting that the latter got made by TNT.


Red Elk-Reed’s greatest impact during those years came when she served as a consultant advising Hollywood studios on the authenticity of how native peoples were portrayed on television and in film—and whether those portrayals were factual or based upon fictional tropes. She knows, perhaps better than most, how Hollywood has perpetuated cowboy and Indian stereotypes that while embedded in American culture, are based upon gross distortions of reality.
Red Elk-Reed's father, James Red Elk, is a descendant of the Sitting Bull family and her mother spoke five languages—French, Latin, Lakota/Dakota, Assiniboine and English. Married to husband, Dennis Reed, for four decades, the couple has two children and several grandchildren.


What advice does she have for young people? “Students need to think outside the box, question most of what is taught, choose their experiences wisely, and remember the wonder and excitement of life they knew as a child and be happy."
Red Elk-Reed is Mountain Journal’s first poet in residence, invited to share her work because she understands the kinds of connections which transcend the ephemeral, superficial aspects of modern daily life that divide people. Her work will be appearing via her column, "Notes From Open Earth."  Enjoy MoJo’s interview with Lois Red Elk-Reed.

MOUNTAIN JOURNAL: When did you start identifying as a poet and where does your inspiration come from?


LOIS RED ELK-REED:   I wrote my first poem when I was 12 years old.  My mother kept it and kept several other writings of mine during my teen years. Mother shared the writings with a teacher who called me a poet. I am constantly inspired by feelings not spoken of, what I see in expressions and situations.


MOJO: You grew up at Fort Peck.  For someone reading here who has no idea where it is and the defining characteristics of land and community, how would you describe it?


RED ELK-REED: The Fort Peck Reservation has always been known to me as home – Makoce. The place where loving family resides, where life unfolded in Lakota/Dakota. This is very different than life as a non-Native.  My world view was through the education of Hunkpapa and Ihunktowan culture and traditions.  That is my initial view of home. Outsiders will think of the Reservation as isolated, desolate, a poor economy, where no future lies, and for some, that is part of the story. 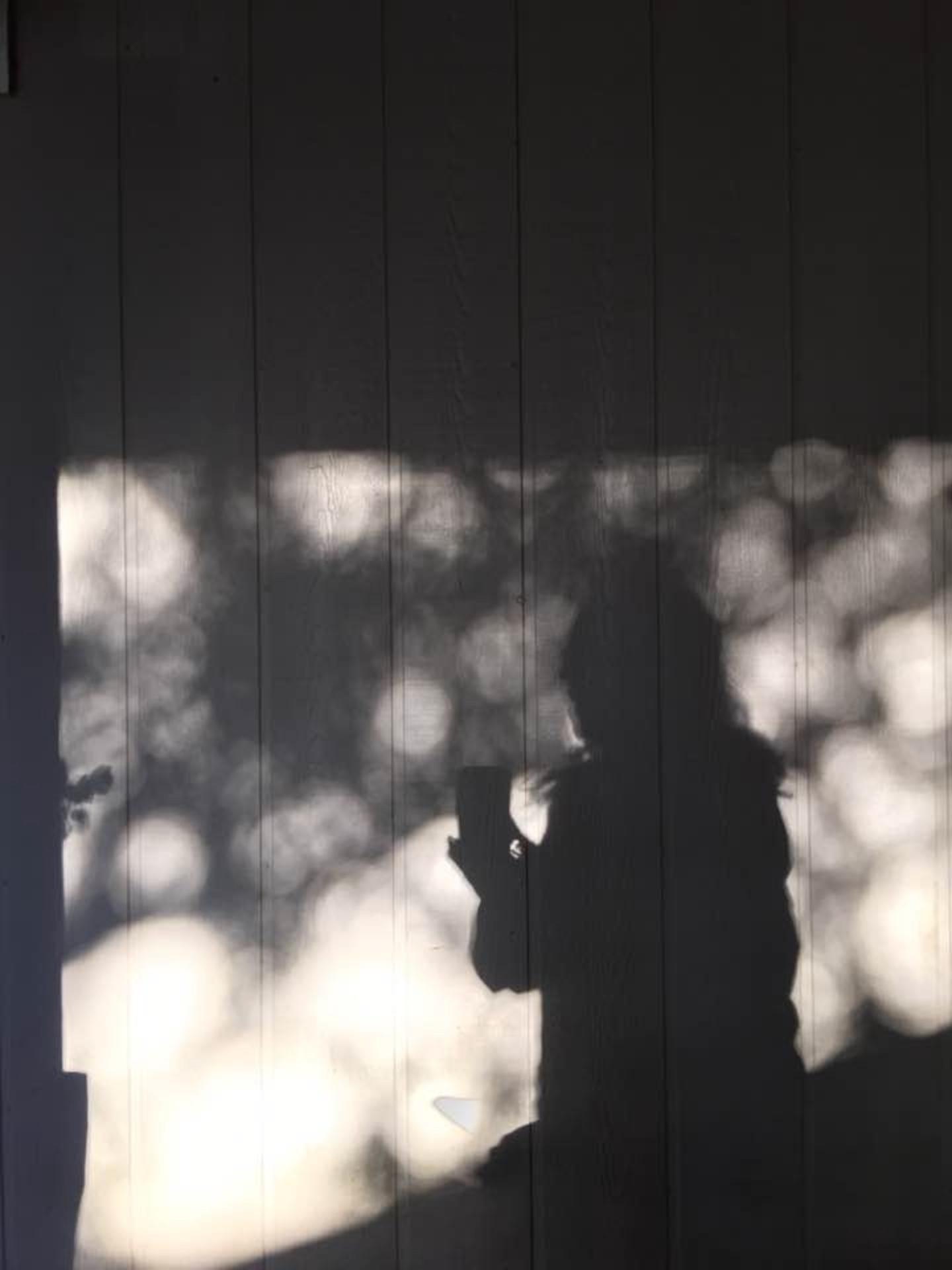 Lois Red Elk-Reed's self portrait taken on her porch in Montana.
MOJO: North America is a continent full of paradoxes, hypocrisies, hopes, injustices, points of cultural tethering and mosaics, and fraught with examples of where the goodness of humankind seems nowhere in sight.  The United States is a construct where independent sovereign nations exist side by side and overlap.  As you ponder these times we live in, what's at the forefront of your thoughts?


RED ELK-REED:   Forefront as I think of the times we live in, I think, this too will pass.  Times are always difficult.  I guess I am an optimist.  My culture teaches me to see the humanity in people, to encourage, support and embrace that.


MOJO: You have lived a fascinating life and in many ways know the dream of going to California and being "discovered" by Hollywood.  It all started when you moved to Los Angeles  to babysit for your sister and then, through an unexpected chain of events, you became an actor.  How did that happen?


RED ELK-REED: The Hollywood life is part of American culture and it is always attractive.  My participation in that life was only to educate.  It was never a part of my culture. I observed so many stereotypes of Native culture and lifeways in all avenues media that I had to speak up and point out all the nonsense.  In pointing out, I was able to provide answers and solutions and find many natives who were willing to participate as advisors and educators to the film industry.


MOJO:  Tell us about some of the roles you played and were they satisfying?


RED ELK-REED:  I started as a technical advisor then was offered a role. Before participation I made sure the script was historically and culturally accurate.  I was able to work with actors, writers, producers and directors who had my same concerns and who were Native.


MOJO: In your poem, Encounter at the Fort, you write of an encounter that you and your sister had Fort Union with the ghost of a Cavalry trooper who had lost his way.  Hopefully, we'll publish that poem at Mountain Journal in the future, but what also struck me about the poem is the endearing way you mentioned your sister.  Tell us about your family and how important extended family is.


RED ELK-REED: In Dakota/Lakota culture, family starts with stone, then stars, earth, animals, plants, the elements of water, air, fire, last is we humans.  This concept of family is encoded in our language. Most people do not know this, so they don’t understand the respect we have for all things because all is family.  Family is very important. The love for the human family is as important as the rest.


MOJO: With poetry, choice of individual words strung together, forms the magic of language. How does your poetry reflect your own commitment to preserving your native language, culture and traditions?


RED ELK-REED:   All poetry reflects the culture of the one who writes it.  My writings reflect a very strong and accurate portrait of Dakota/Lakota because that is all I know.


MOJO: You teach at Fort Peck Community College.  In a general sense, what are some of the most important lessons that young people need to learn?


RED ELK-REED: Students need to think outside the box, question most of what is taught, choose their experiences wisely, remember the wonder and excitement of life they knew as a child and be happy.


MOJO: What kind of poet are you and what does all great poetry have?


RED ELK-REED: I guess I call myself an organic poet.  I’ve had no formal training. I learned and grew without the influence of fertilizer and pesticides. Ha!


MOJO: What is one question you wished that we had asked?


RED ELK-REED: Too many to decide…
EDITOR'S NOTE:  Lois Red Elk-Reed's volumes of poetry are available through all independent bookstores. You can also order them here:
Why I Return To Makoce
Our Blood Remembers
Dragonfly Weather
Increase our impact by sharing this story.

GET OUR FREE NEWSLETTER
Never Miss A Big Story!

Poems About Mato And The Power Of Bear Medicine
Perfect for the approaching solstice, MoJo Poet In Residence Lois Red Elk shares two works about how a great nation and a...
Read
Big Art of Nature, Columnists, Culture

Sue Cedarholm Is Creating One New Painting, Every Day, For A Year
Through her column, "Watercolor Diary," the Jackson Hole artist will share vignettes about her interludes outdoors.
Read
Culture, Guest Commentary, Politics, Ranching

Robert Staffanson (1921-2019) Reflects On What It Means To Be A Real Cowboy
An old wrangler looks back on his life as he nears the end of the trail.  Bob Staffanson, who founded The...
Read
Back to home