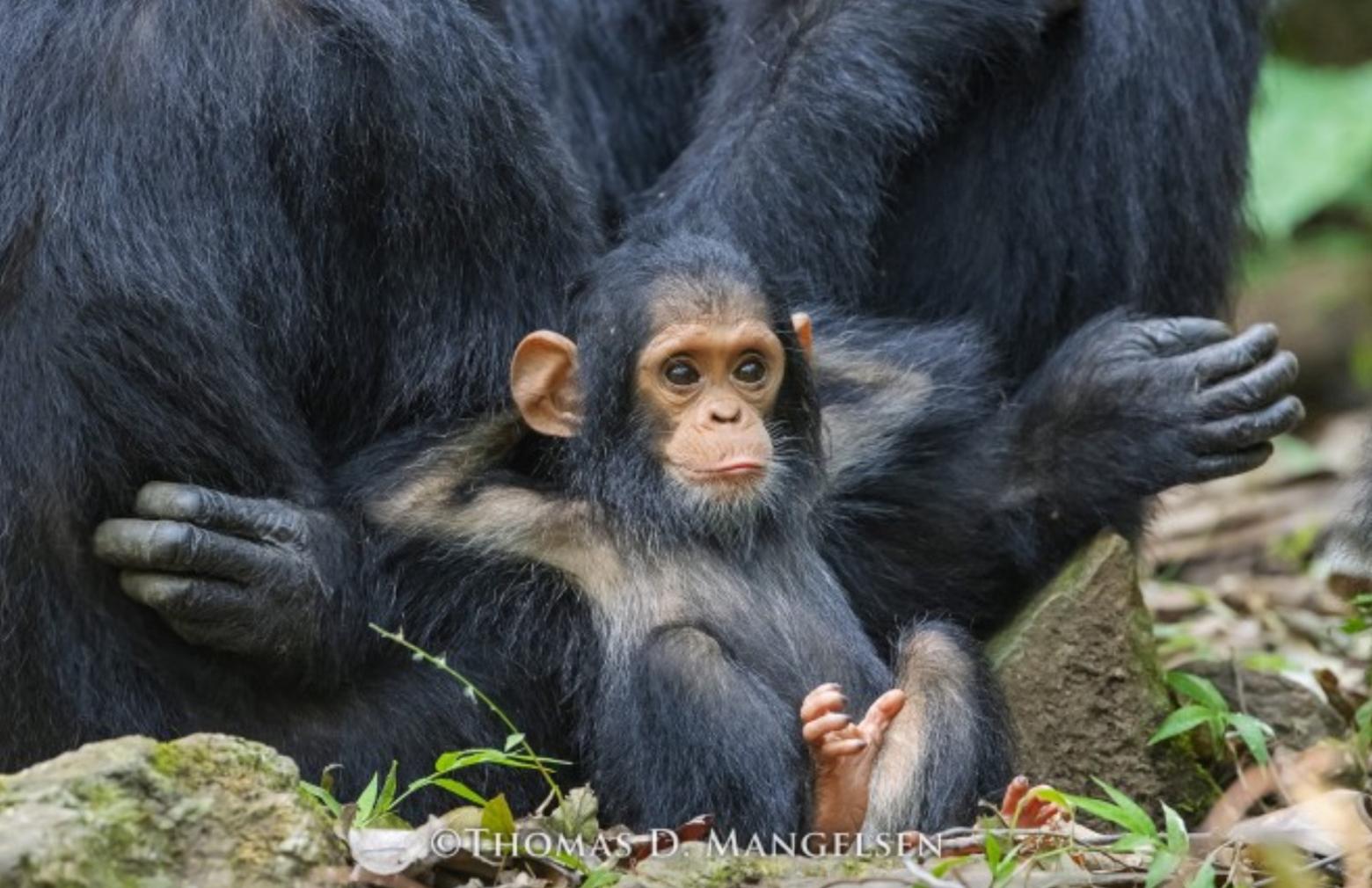 Gombe the chimp is the grandson of Gremlin, a chimp Jane Goodall studied in Tanzania half a century ago. This portrait, titled "Laid Back," by Jackson Hole photographer Tom Mangelsen, is the official image for the 60th anniversary of Gombe Stream National Park. Photo courtesy Thomas Mangelsen
Jane Goodall is likely the most widely recognized conservationist on Earth. But what gives her standing gravitas is that she's universally beloved, respected for saying animals deserve human compassion, and even as an octogenarian, evincing fearlessness in calling upon companies to demonstrate more social responsibility in maintaining a livable planet for all.
Many readers here may not know this, but Goodall has told me on several occasions she reserves a particular fondness for the Greater Yellowstone Ecosystem.  She enjoys coming here. She says there are several symbolic issues that people, no matter where they are from, ought to care about in our region. And she believes that Greater Yellowstone has attracted a high caliber of devoted advocates, young and old, who grasp what is at stake.
This summer was to be a special one for Goodall. She had planned to “go home” to Gombe Stream National Park in Tanzania. It was 60 years ago that she arrived as a young woman in East Africa, fulfilling a childhood dream of going there after reading Tarzan of the Apes and Dr. Doolittle.  As circumstances fatefully happened, she accepted an assignment from paleoanthropologist Louis Leakey to study chimpanzees. 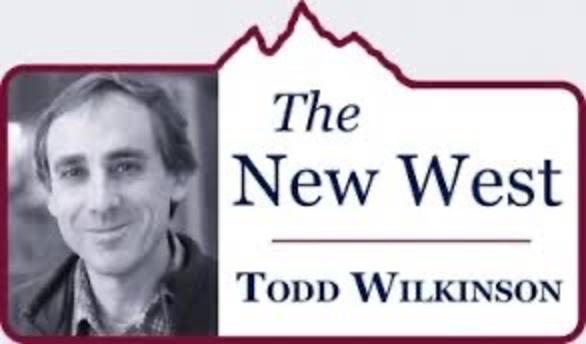 Demonstrating hardiness, empathy and insight, Goodall became the best-known primate researcher in the world, providing proof that our genetic cousins are highly intelligent, sociable and can use tools.  She adds that they have personalities and emotions as we do. Today, seemingly indefatigable, she is a formidable voice for consideration of non-human beings that often are mere afterthoughts in the human-centric mania that has delivered us into “the Anthropocene.”

Last autumn, Goodall was in Jackson Hole, Wyoming, staying with her dear friend, photographer Thomas Mangelsen, at his home outside Moose. They were looking through photographs that Mangelsen took in 2018 when Goodall escorted him on a hike through the jungles of Gombe looking for descendants of the chimps she studied and helped protect.
The Mangelsen picture she selected as the official image for her 60th anniversary in Gomb  is titled “Laid Back” and it captures the relaxed posture of a then-10-month old named Gombe, who is the grandson of Gremlin, a chimp Goodall studied long ago. Yes, family ties spread across three generations, not unlike famous Jackson Hole Grizzly 399 and her cubs.
The covid pandemic has put a kibosh on plans for having a large gathering of Gombe scientific alums and local people who are evolving their own form of sustainable environmental stewardship. Instead, Goodall, working harder than ever, has been holed up at her family home in Bournemouth, England, staying connected via Zoom and other platforms to keep raising awareness about threats to nature.
In May of this year, she expressed excitement upon learning that Grizzly 399 had emerged from her den with four new cubs. A few years ago, when Mangelsen and I were invited by current U.S. Rep. Raul Grijalva, chair of the House Natural Resources Committee, to give a presentation on 399 in the U.S. House theater, Goodall made an impromptu video that was aired. Recalling her first sightings of Greater Yellowstone bears with Mangelsen, she condemned hunting grizzlies as trophies and for fun. 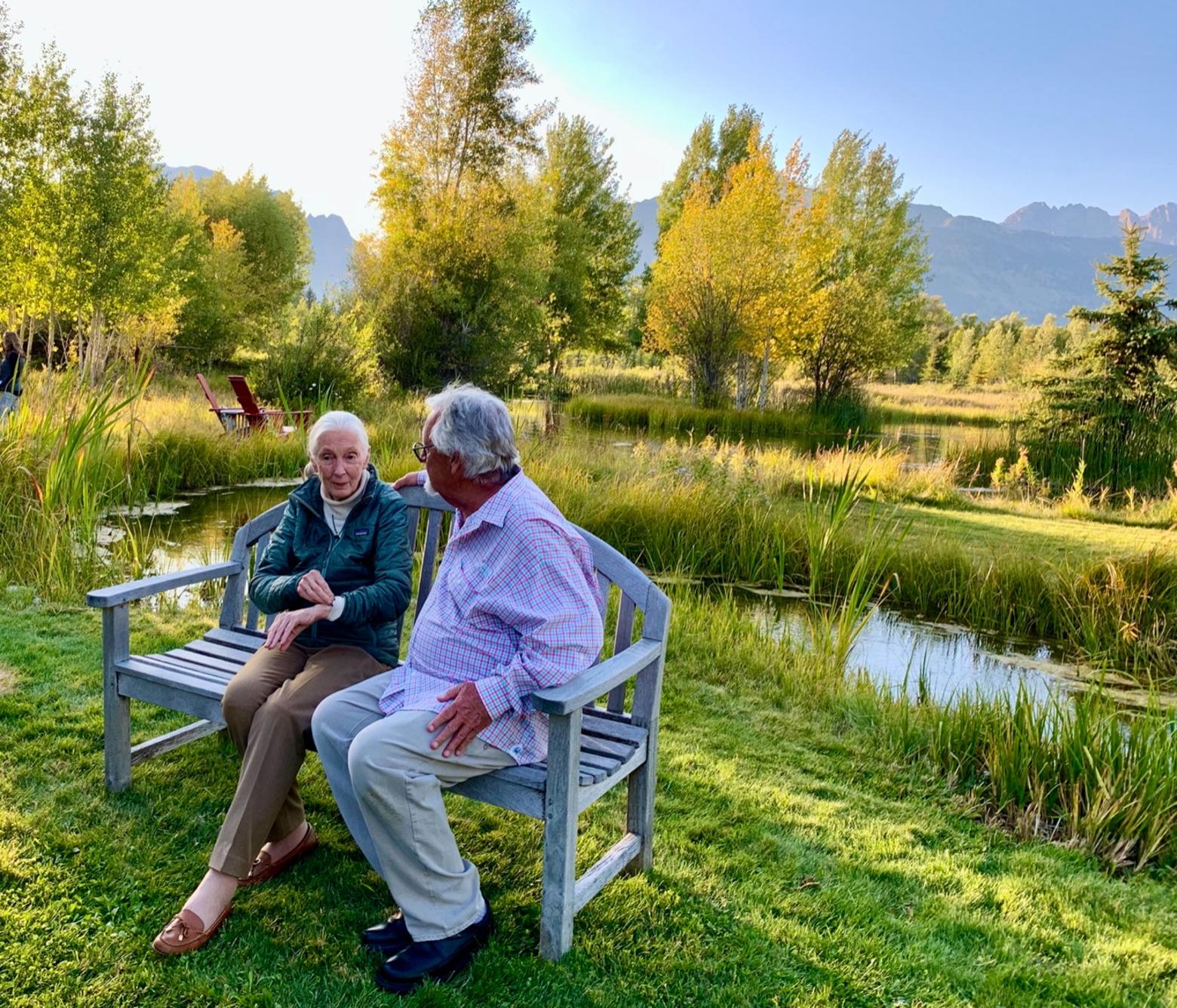 Bonded by friendship and conservation: Jane Goodall and Tom Mangelsen reminisce about their trip to Gombe Stream National Park in Tanzania during Goodall's visit to Jackson Hole in autumn 2019. Photo by Todd Wilkinson
While one might think the primary reason Covid-19 interrupted festivities at Gombe was to protect Goodall and other humans, part of her reasoning for staying away was actually to safeguard chimps that might be vulnerable to catching the novel coronavirus.
The U.S. National Institutes of Health circulated a paper that serves as a dire advisory. “The viral infection may also represent an existential threat to our closest living relatives, the nonhuman primates, many of which have already been reduced to small and endangered populations,” it reads. “Our study suggests that apes and African and Asian monkeys, as well as some lemurs are all likely to be highly susceptible to [Covid-19], representing a critical threat to their survival. Urgent actions may be necessary to limit their exposure to humans.”
This is especially worrisome for Goodall and it illustrates something she has said for years: it isn’t just one thing threatening wildlife being pushed to the edge. Often it’s a combo of things. And it shows how much more vulnerable island populations of species are, be they chimps in Gombe or grizzlies in Greater Yellowstone.
Along with genetic concerns and more people causing more habitat fragmentation in Greater Yellowstone, climate change impacts and more conflicts between people and bears resulting in grizzly fatalities, there can be diseases that come seemingly out of nowhere. If they strike with a high level of lethality, an island population of animals can quickly suffer devastating losses.
It’s why Goodall says we need sustained vigilance, to remember that such populations are not only magnificent, but fragile. Grizzly bears will be a species that, in the Anthropocene, will warrant continuous conservation attention for the long foreseeable future, she says, just like chimps.
Mangelsen is donating proceeds from the sale of his photograph, “Laid Back,” to Goodall’s organization, Roots and Shoots (rootsandshoots.org) that foremost is solidifying connections between millions of young people and the natural world while helping them discover the empowering rewards of wildlife advocacy as a passion for life.