Each Wednesday, in "It's All Relative," the Montana fine artist will explore issues shaping Greater Yellowstone and the West with sardonic truth 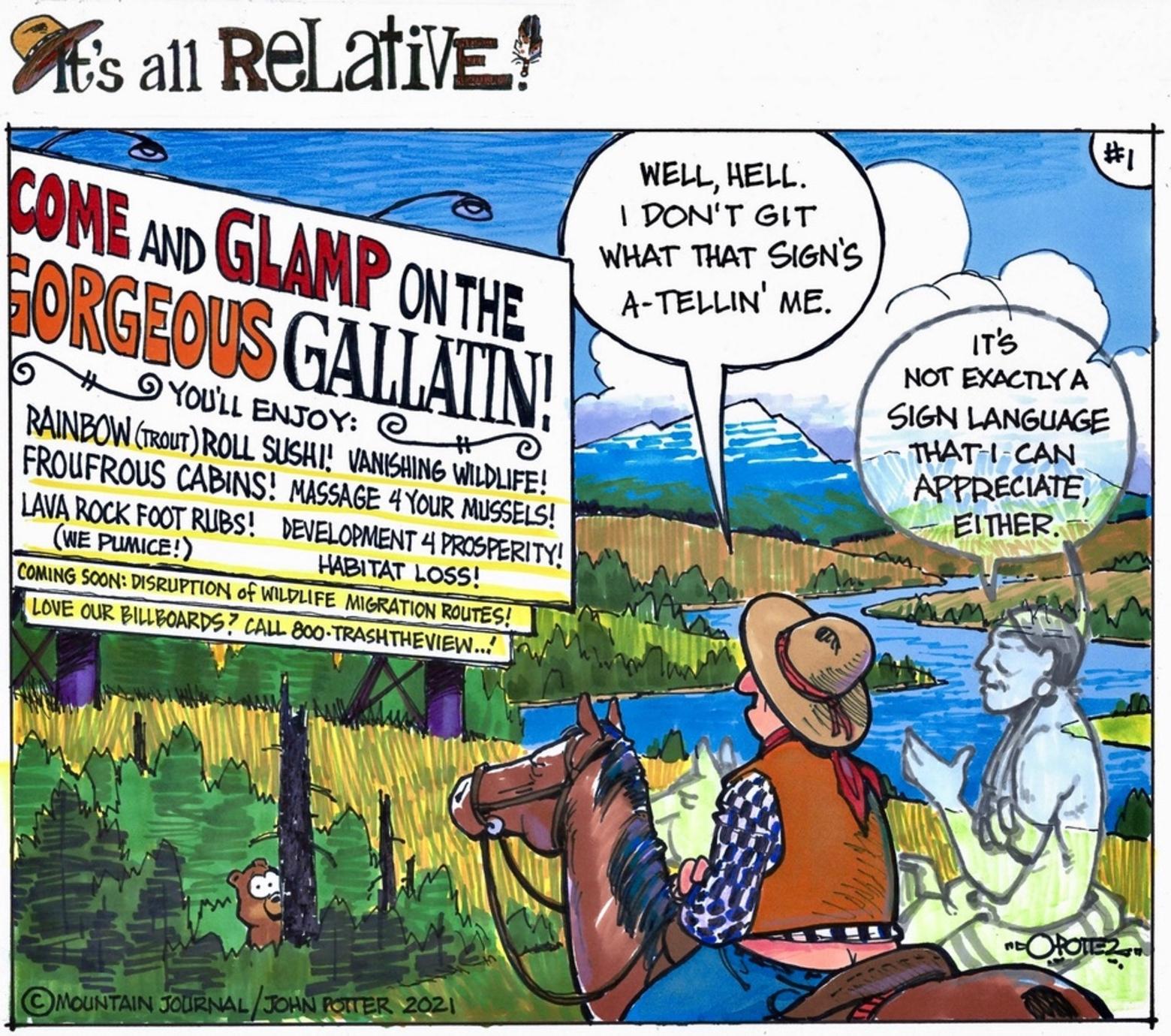 By Mountain Journal
Great editorial cartoonists have been part of the long tradition of journalism in America. While the profession has fallen upon tough times paralleling the struggles of newspapers, there remain a few who are able to distill the essence of issues pictorially through characters, attitude and sparse use of words.
Mountain Journal is proud to say we’ve landed a talented one. John Potter is coming out of retirement, where he’s actually gained distinction as a fine art painter of wildlife and Western landscapes, to launch a new offering, It’s All Relative, that you’ll find here every Wednesday.
Potter, who for years worked as an editorial cartoonist at The Billings Gazette, where one of his pieces was once nominated for a Pulitzer Prize, has been a longtime friend of Mountain Journal founder Todd Wilkinson. We couldn’t be happier to have him on board, bringing a form of commentary that will be a regular potent blend of satire, poignance and sardonic truth.
His inaugural cartoon addresses an issue of controversy that has erupted along the western outskirts of Bozeman where a private entrepreneur is hoping to win approval from Gallatin County to build a large commercial “glamp ground” resort near Gallatin Gateway along the storied Gallatin River. Definition of glamping: A form of camping involving accommodations and facilities far more "glamorous"  than those associated with traditional camping.
Not only is the Gallatin River, which is born in Yellowstone National Park, part of the blue-ribbon triumvirate that converges to form the Missouri River  but it’s part of the natural character of this corner of the Greater Yellowstone Ecosystem.
As Gallatin County and Bozeman are dealing with unprecedented population growth and development, many defenders of the Gallatin River see the glamping proposal as an example of how the push to commercially exploit and monetize nature is leading to its ruination. Others see the glamping proposal as a great business opportunity, especially to reach a well-heeled clientele of vacationers who find roughing it unappealing.
Be it his spoofing cartoons or his fine art which has visual impact, Potter himself is, by his own admission, shy when it comes to being in the limelight. He spent his youth being raised on both the Lac du Flambeau (Ojibwe) Indian Reservation in Wisconsin and in Chicago.
As a socially awkward and introverted kid, he says he spent most of his early years away from people and in the embrace of the forest and its wild inhabitants. "My family likes to joke that I was raised by wolves. I should be so lucky,” he notes.

Eventually, much of that time in the wild was spent with a sketchbook in hand. Drawing and sketching the mammals and birds that came to him as he sat motionless was both a source of solace and an obsession. "They were not just 'subjects', they were more like family,” he explains.

Potter eagerly pursued art in high school and afterward he headed west to attend Utah State University where he earned degrees in illustration and painting.  Following graduation, he spent 19 years as a staff artist and cartoonist for The Billings Gazette. He did everything from illustrations to courtroom sketches and his editorial cartoons that were reader favorites.

However, feeling restless and pulled by a desire to paint fulltime, he gave up job security, went through years of struggle and emerged as an artist whose work today is found in private collections around the world and in the permanent public collections of several museums, including the National Museum of Wildlife Art in Jackson Hole, the Brinton Museum in Big Horn, Wyoming and the Montana Historical Society Museum, the same place that has works by one of his influences, Charles M. Russell.

Without further ado, meet John Potter, enjoy his cartoons, help us get them into wide public circulation and read our interview with him below.  You can also check out Potter's fine art paintings and commission work by clicking here. 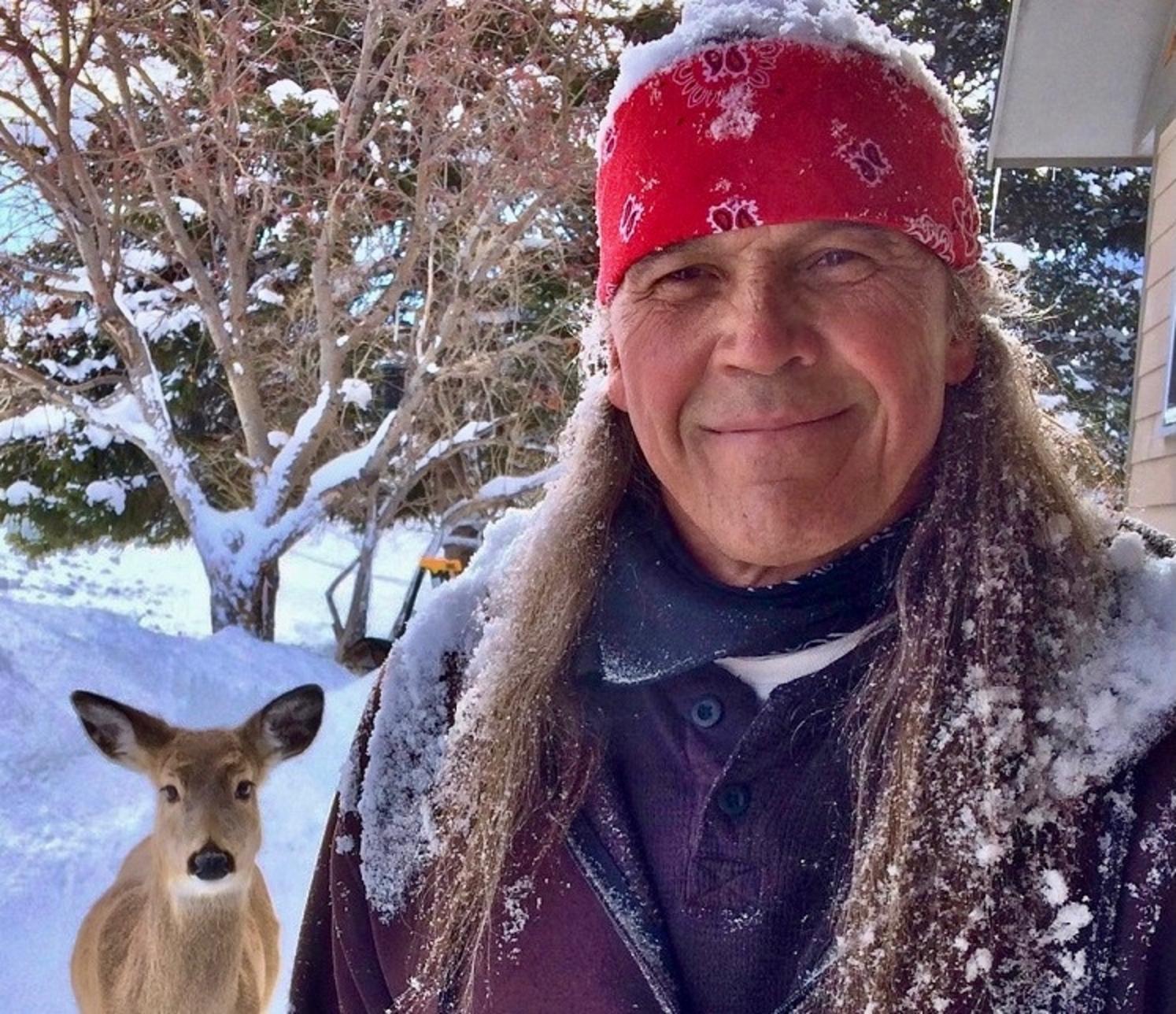 The cartoonist and friend in Red Lodge, Montana.
MOUNTAIN JOURNAL: Cartooning is its own fine art form. In journalism, cartoonists can win Pulitzers and one of yours was nominated for a Pulitzer.  How did cartooning get on your radar screen and who are a few of the others who inspire you?
JOHN POTTER: My first inspiration for cartooning was Charles M. Schulz (I copied Peanuts cartoon strips obsessively when I was a kid). I loved Peanuts. Got an autographed letter from Mr. Schulz once too.  Cartoonists that have inspired me include the great Walt Kelly ("Pogo"), Bill Watterson ("Calvin & Hobbs"), Garry Trudeau ("Doonesbury"), and political cartoonists Bill Mauldin and Pat Oliphant.
MOJO: You worked at The Billings Gazette as their editorial cartoonist and graphic artist for years. How did you get that gig?
POTTER: Someone on the hiring and firing committee at The Gazette had a serious lapse in judgment. Actually, a fellow cartoonist named Craig Curtiss, who was also a former lettering artist for Stan Lynde ("Rick O'Shay"), helped me get that job, giving me a great referral.
MOJO: We've known each other for years. What some people may not realize is your standing as a fine artist. You've been in major shows as a painter of landscapes, wildlife and indigenous scenes and every fall you're part of the Western Visions Show at the National Museum of Wildlife Art in Jackson Hole along with the best wildlife artists in the world. What drives you as a painter?
POTTER: Hunger, mostly. Cartooning has always been in my head, but painting has always been in my heart. I am forever obsessed with and moved by the natural world, its quiet dignity, its all-pervading divinity. And I'm determined to listen to the natural world, not just to learn more about it, but to learn more from it. And that's the bottom line for me: Most artists are out there to make their voices heard. I paint to listen. 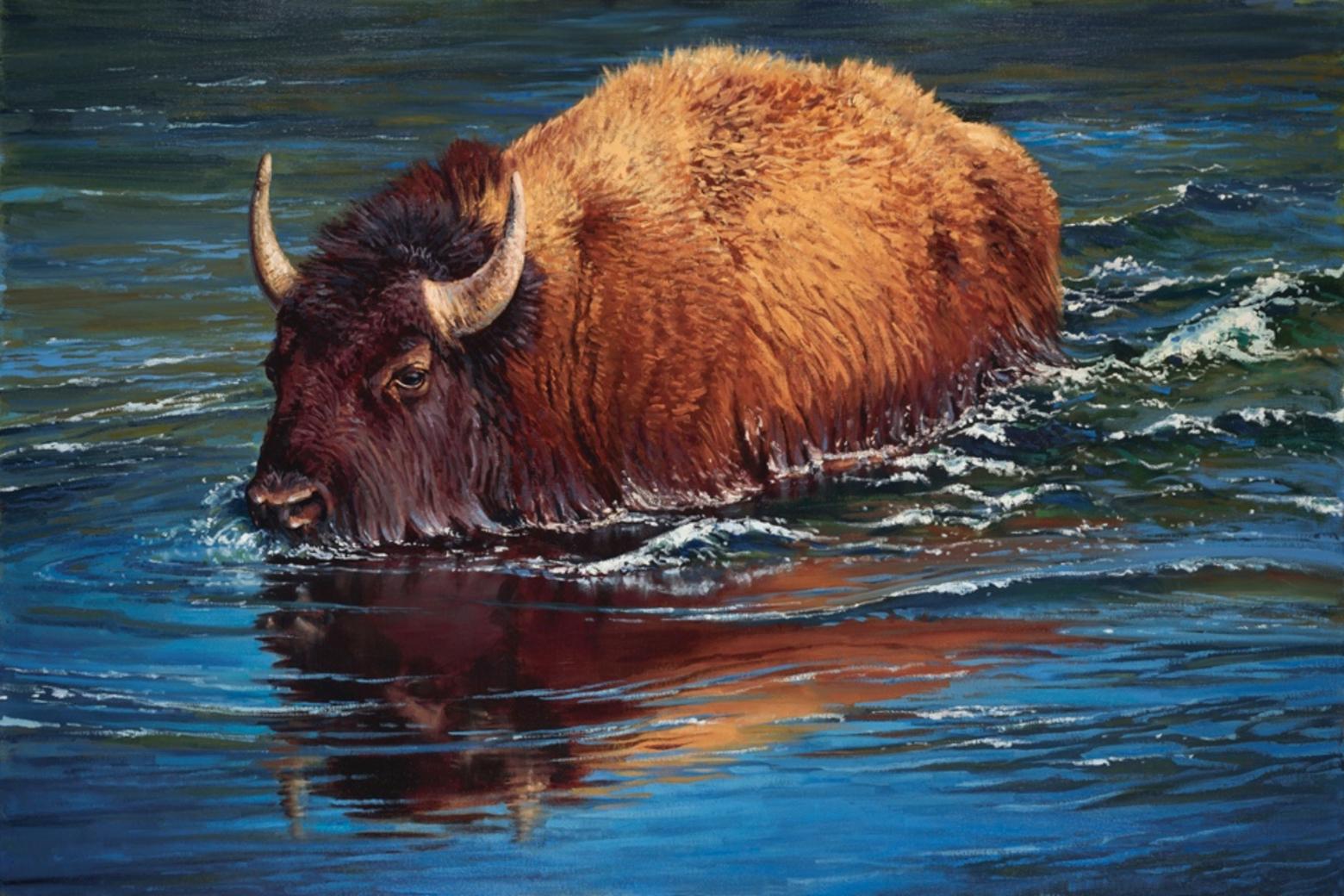 "Making Waves," a painting of a Yellowstone bison by John Potter (johnpotterstudio.com)
MOJO: You have serious concerns about the fate of the Greater Yellowstone Ecosystem as a region where wildlife can still persist and where indigenous people can be reconnected. What do you hope your cartoons dealing with contemporary social and ecological issues will accomplish?
POTTER: I've heard it said that a cartoonist's job is to make people laugh while you're calling them out on their shit. Sometimes you gotta get their attention first, though. I hope to awaken people to the notion (i.e., belief) that Yellowstone, the GYE, and all land is sacred. We need to view the Earth as a sacred being, not just a rock to be exploited. We have a responsibility to our earth, and to our great grandchildren, whom we are borrowing the land from. We can do it with a smile. 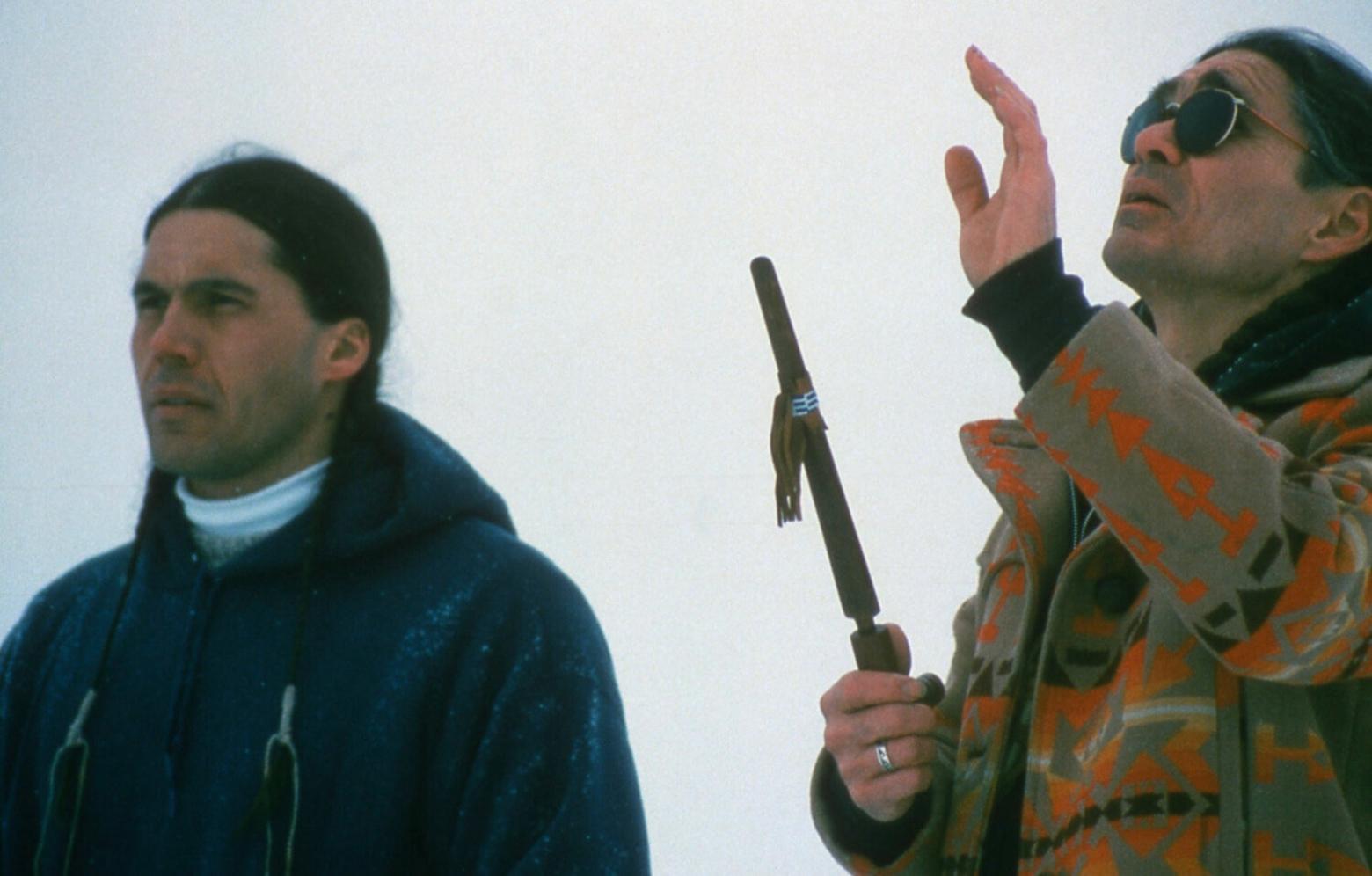 Potter, left, and his friend, Scott Frazier, were in Yellowstone in 1995 to impart a blessing and mark the arrival of wolves reintroduced to America's oldest national park. Photo courtesy Jeanne Johnson
MOJO: You and a friend were there in the winter of 1995 when wolves were restored to Yellowstone and you offered them an honoring prayer in the Lamar Valley.  When you look back at that moment, what sticks out in your mind?
POTTER: My brother, Scott Frazier, and I were asked by Yellowstone to perform welcoming and adoption ceremonies for the wolves when they were returned to the Park during both phases of reintroduction, in 1995 and '96. These remain as some of the best moments and memories of my life. I felt, and still feel, as if I/we were becoming the dreams of our ancestors, and answering the prayers of the wolves' ancestors.
MOJO: You were raised on and off the Lac du Flambeau Chippewa Indian Reservation in Northern Wisconsin. What do you like about the West?
POTTER: Our people have cultural ties to these Beartooth Mountains. I felt a sense of belonging to these mountains the first time I saw them, as a teenager, without knowing about our relationship to them, at the time. I also like that there's only eight months of winter here, as opposed to the nine months of winter—and three months of bad sledding—that we have back home in Wisconsin. 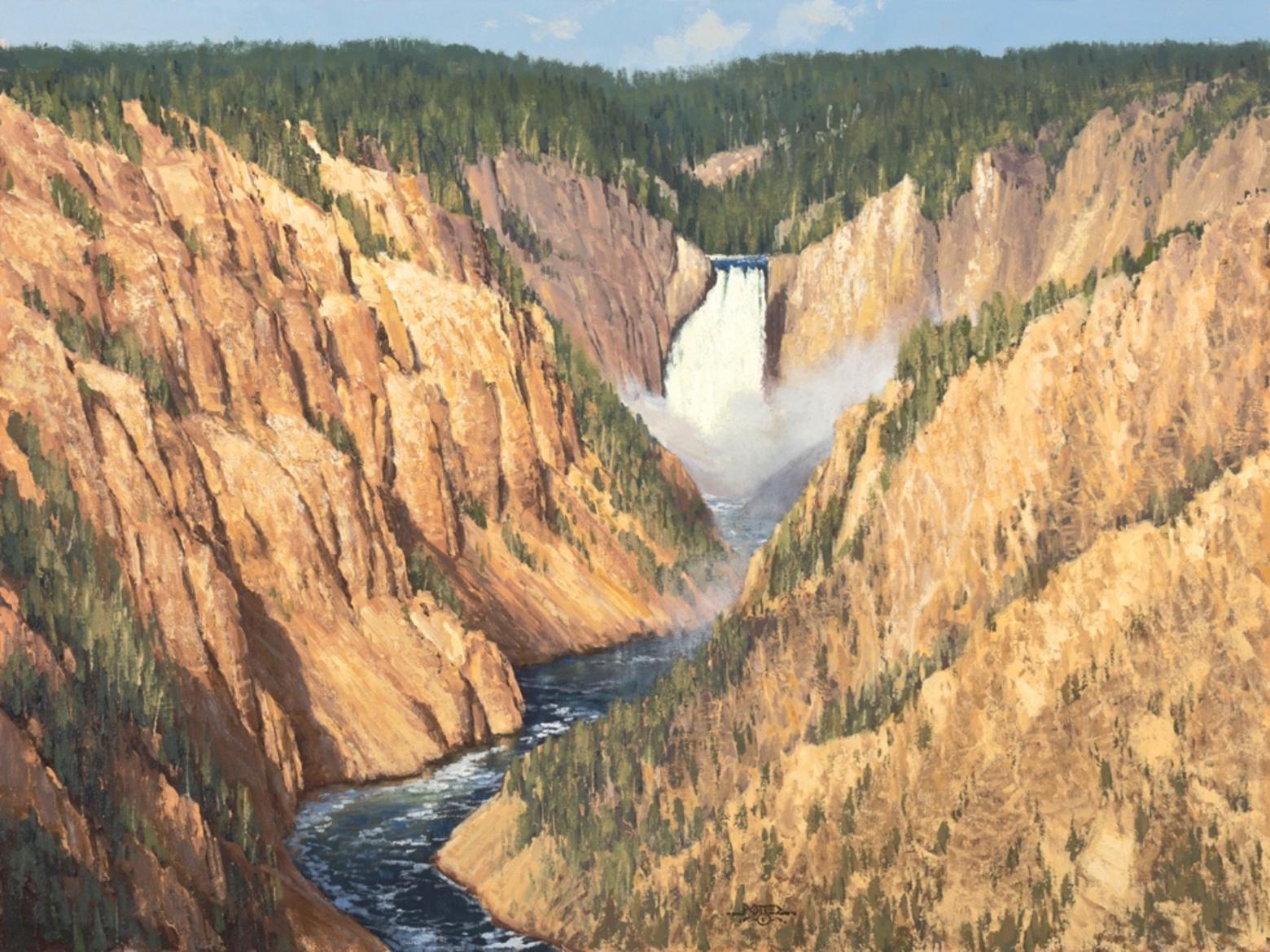 "Osprey Heaven," a painting of the Grand Canyon of the Yellowstone by John Potter (johnpotterstudio.com)
MOJO: We share a fondness for certain indigenous North American foods, including walleye, wild rice, squash and corn. You've been adopted into the Sherman family from Pine Ridge, South Dakota. They are Lakota and the family includes Sean Sherman, the famous "Sioux Chef” who is a national leader in the local indigenous food movement. Share a bit about your friendship with them.
POTTER: Yet another in a long line of lapses in judgment that I've benefited from. The Sherman family knew, going in, how much food I can put away in one sitting. Gerald Sherman and I met at a community holiday dinner in Roscoe, Montana, during the Christmas season of 2011. I had been asked by the organizers of the event to offer a prayer over the meal, and so, of course, I began my prayer in Ojibwe. Gerald, again who is Lakota, looked at his wife, Jael, and said, "Who let the rabbit choker in here?" Sensing that there'd be nothing left for him to eat if I got to the line first, Gerald called for "security" to have me physically removed from the building, but "security" was in a donut-induced coma. So, long story short, Gerald put his son, Sean, through chef school, in order to ease the added strain placed on the family's food supply stores incurred by adopting me.
EDITOR'S NOTE: You can watch a short TV news report about the proposed glamping project for the Gallatin River below.