Cease Fire Now: Should Public Lands Be Places Where Politics Are Checked At The Trailhead?

Chris Hunt escaped to a river to fly fish. Back at camp, he met a citizen who was there at the Capitol on Jan. 6. Then, around a campfire, all hell nearly broke loose 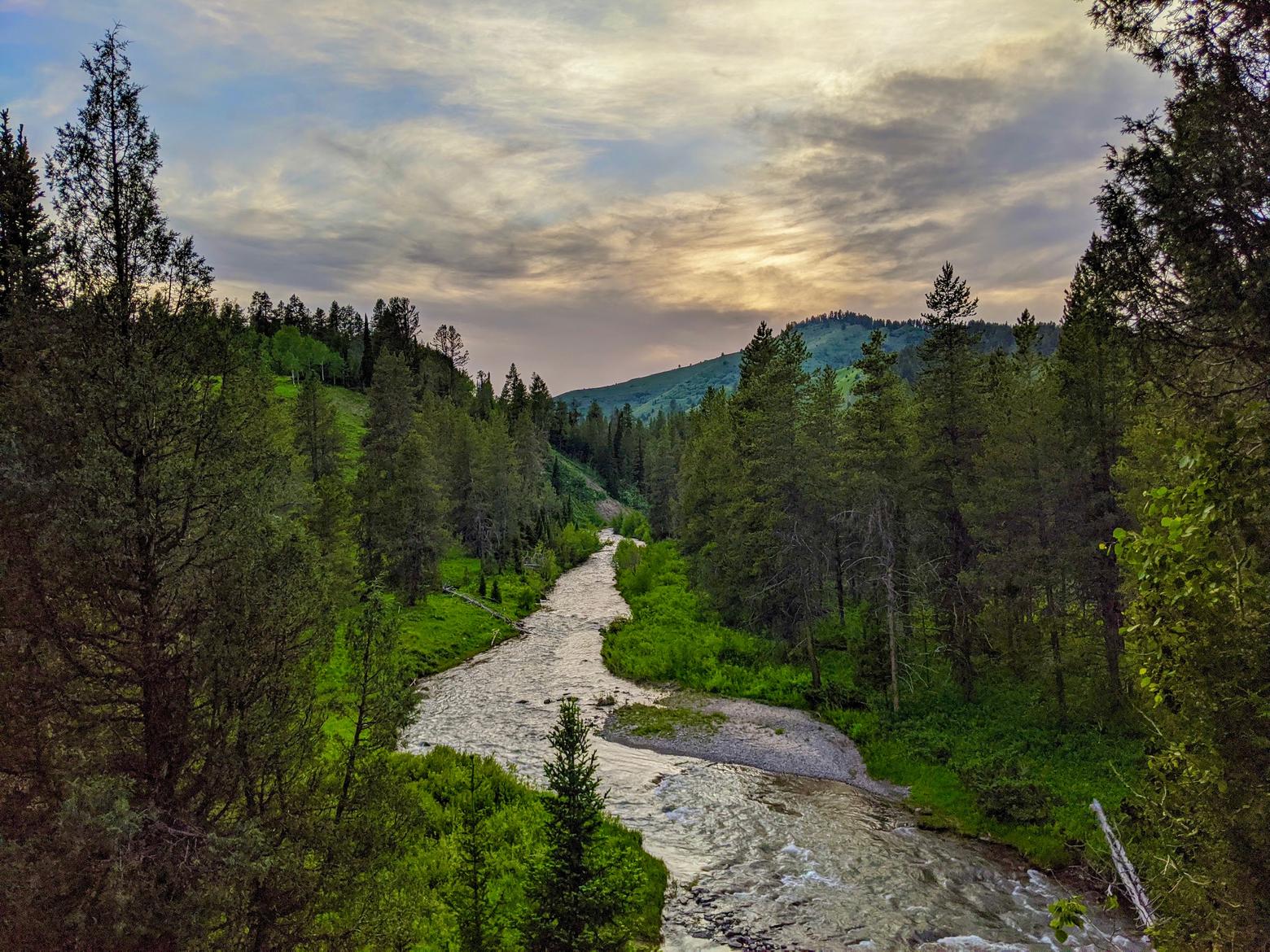 An Idaho trout stream that shall not be named. Photo courtesy Chris Hunt
By Chris Hunt
My partner’s grandson and I rounded a bend on the little creek that flows near the border of Idaho and Wyoming—it’s on U.S. Forest Service land, and can be a productive fishery, particularly for a guy trying to teach a youngster the intricacies of fly fishing.
It’s not particularly wild country, but it is a bit remote — 16 miles to the nearest town. In the middle of the day, though, I’d be totally fine letting grandkids run about without too much supervision; a simple, “Check in every half hour or so, OK?” is about all I’d ask. This is a place I know very well, and the views are such that finding a kid by standing atop the bluff and looking out over the meadow below is pretty easy.
As we crested the bend, another angler was coming our way, armed with a fly rod, a floppy hat…and a holstered handgun. He turned out to be new to fly fishing, and was new to this creek as well. We chatted briefly, and I offered him some pointers, added about three feet to his leader, put a strike indicator two feet above his Prince Nymph and formally introduced myself. He was camped not too far from where Braxx and I were camped with my partner Toni and her granddaughter Cyra (these kids aren’t mine, but I happily claim them).
The new angler then noticed Braxx checking out the gun on his hip.
“I hope you don’t mind, but I am armed,” he said. “I don’t know if I’ll need it, but it’s always best to be safe. Do I have anything to worry about?”
Did I mind? Meh. It’s Idaho.
It’s an open-carry state—no license is required to carry a firearm in plain sight, and it’s not unusual around these parts to see folks with guns on their hips. It’s a difficult pill to swallow sometimes — the notion that guns make us safer remains a strange idea to me, particularly after a fairly lively spring on the mass-shooting front (as of this writing, there have been 247 mass shootings in the US, and 283 deaths as a result of it). But I live in a very red state—guns are sacred here, and have been for decades.
Did he have anything to worry about? Never in 22 years of fishing this particular creek have I had a wildlife encounter that would give me pause. In the fall, during grizzly bear hyperphagia, I’ll carry a can of bear spray, just to be on the safe side. But I’ve never had to open the valve. Ever. So, in my estimation, no. He had nothing to worry about.
But then it got weird.
° ° ° °
I got back to camp and Toni was quick to let me know that she’d met the same guy and his son, who was, conveniently, Braxx’s age. I said that he seemed like a nice guy,  and by all accounts, he was. But Toni admonished me quickly.
“He is a nice guy,” she said. “But you don’t get to talk politics with him.”
That was a fair warning. For Idaho, I’m a flaming liberal. I’d pass as a solid moderate elsewhere, but here, I’m a shameless lefty.
The events of this past winter and the ongoing perpetuation of “The Big Lie” eat away at my very solid American soul. In Idaho, I have plenty of opportunities to engage in political discourse on the topic, and, generally, it ends with a “We’ll have to agree to disagree” declaration and a handshake. 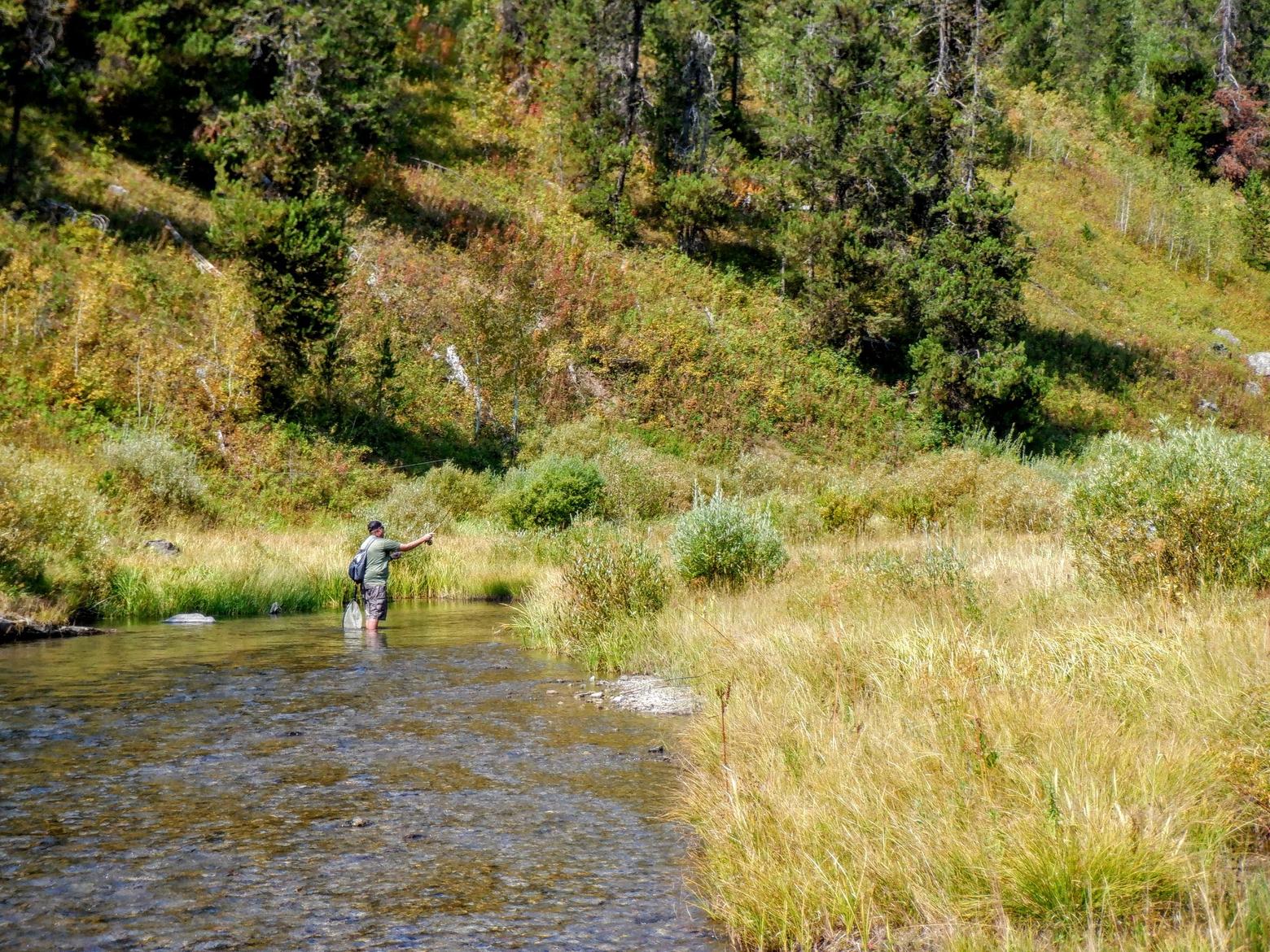 A sad commentary on us: The political divide replete with fear and guns has even reached the backcountry—once a sacred zone of solace for most people. What kind of nation are we becoming? What lessons are we, by our own example, teaching the next generation? Photo courtesy Chris Hunt
Yes, it’s frustrating. I’m bewildered on a daily basis. But I choose to live here, largely for the very thing that I shared with this new angler—Idaho is awash in public lands and the opportunities these precious landscapes provide.
And, also, just for the record, I own several firearms myself. I like to occasionally hunt grouse and ducks, and I’ve been known to pick up an over-the-counter deer or elk tag. I’m not anti-gun. Not remotely. But I am pro-pragmatism. And, while I’ll never tell anyone they shouldn’t wear a gun on their hip, it’s not something I’ll likely ever do.
Well… until maybe last weekend.
° ° ° °
My new acquaintance and his wife and kids wandered over and spent a couple nights around the campfire with us, chit-chatting about this and that. I followed my marching orders. No politics.
The second night, though, I had one tumbler of whiskey too many, and our previously cordial conversation erupted—thankfully, the kids were enjoying a card game in the camper and they missed the conflagration. Our new acquaintance took great offense at my assessment of the events of Jan. 6 in Washington, D.C. — a topic he introduced (he’d been sipping from a flask of scotch, so we were both playing with fire).
He was there at the US Capitol, I learned, and his perspective is wildly different than mine. In his estimation, paid actors hired by the liberal left broke into the People’s House, not peaceful demonstrators. The evil mainstream media twisted the events of the day, making it appear that a quiet demonstration turned into a riot that left five people dead.
And Angela Babbitt, the 35-year-old veteran who was shot and killed by Capitol Police as she breached the Speaker’s lobby? She, too, is an actor, and she’s not really dead. It was all staged to shame the Trump wing of the GOP. He believes these things to be true. Down to his bones.
If you ask Toni, I reacted predictably. I said things I should not have. I said things I regret saying. And as my new fly fishing acquaintance stood over me, fists balled up, equally offensive language erupted from his throat among a spray of spittle.
Was this really happening at a campground, a public portal to a trout stream?
Wives and girlfriends jumped into the fray and quickly calmed things down. We were able to end the political discussion without fists flying (or a gun coming out of its holster). With our grandkids and their kids enjoying a great time in the woods, it felt wrong to let political ideology ruin a perfectly good time.
We shook hands and changed the subject. Both he and I were able to put our differences aside — something I wasn’t sure would be possible after a lively exchange of insults. I’m happy we let cooler heads prevail. It was the wise choice.
Now,  all of that said, the reason this story has a generally happy ending is because two grown men with very deep-seeded (and polar opposite) political views could recapture our tempers and soldier on. But as my new acquaintance asked me a day earlier on the creekbank, I now can’t help but wonder: “Do I have anything to worry about?”
From the bears, to the occasional mountain lion and the family of coyotes we spy once in a while at the campsite or on the creek,   I can definitively say, “No.”
But my encounter on the stream wasn’t with a wild animal. Rather, I’d come across my political opposite : a dedicated believer in many of the things I equally disbelieve. And he was armed. There are ways this encounter could have ended differently. Tragically. And, without any political emphasis, I honestly think I have the evidence to show that when idealogues bring a gun into just about any charged situation, shit can get salty (see Kenosha, Wisc).
So here I sit, reliving the evening when a serene campfire gathering turned into an almost-fistfight, and I’m so thankful that there were two others there who were able to step in and keep two juiced men from going at one another.
But things aren’t getting better. Things aren’t getting safer. We’re more divided than ever before, and we’re violently divided, judging by the protests, the riots, the knee-jerk willingness to come to blows around a campfire … the chaos.
And for the first time in my life, I’m wondering if I, too, need to be armed on the banks of a trout stream. Not to protect  me and my family against the wildlife. But from another human being. The thought alone makes my stomach flip. Buying a gun to protect myself and those I love from another person while I’m camping on public lands, miles from civilization . Until last weekend, I would have scoffed at the notion.
Our potent political ideologies are leaking into every aspect of American life, including the once-peaceful campfire where the scariest thing one used to encounter was an expertly recited ghost story.
I keep hearing my new acquaintance: “I don’t know if I’ll need it, but it’s always best to be safe.”
EDITOR'S NOTE:  How do we as a nation come together? If you have a no-nonsense response to Chris Hunt's essay.  drop us a note by clicking here and we'll consider posting your thoughts in the space below. 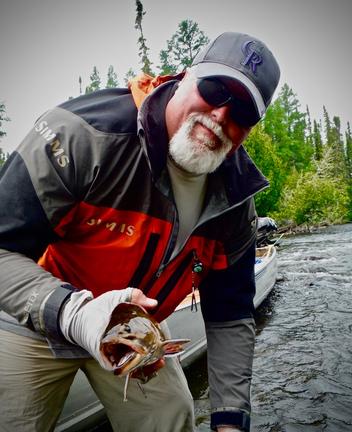 A Greater Yellowstonean, Chris Hunt is a former award-winning newspaper journalist who now writes about fly fishing, travel, conservation and culture for numerous outlets. He's been recognized for his work by the Outdoor Writers Association of America, the Associated Press, the Society of Professional Journalists and the Idaho Press Club. He lives in Idaho Falls, Idaho, and blogs daily for Trout Unlimited. His work has appeared in Field & Stream, the New York Times, Hatch Magazine, The Fly Fish Journal, TROUT and numerous other publications. We welcome him to the ranks of Mountain Journal.