Longtime resident of Bozeman has deep experience in philanthropy, is former leader of parks organization, and devoted to conservation of Yellowstone ecosystem. Hopes to re-open Yellowstone Institute 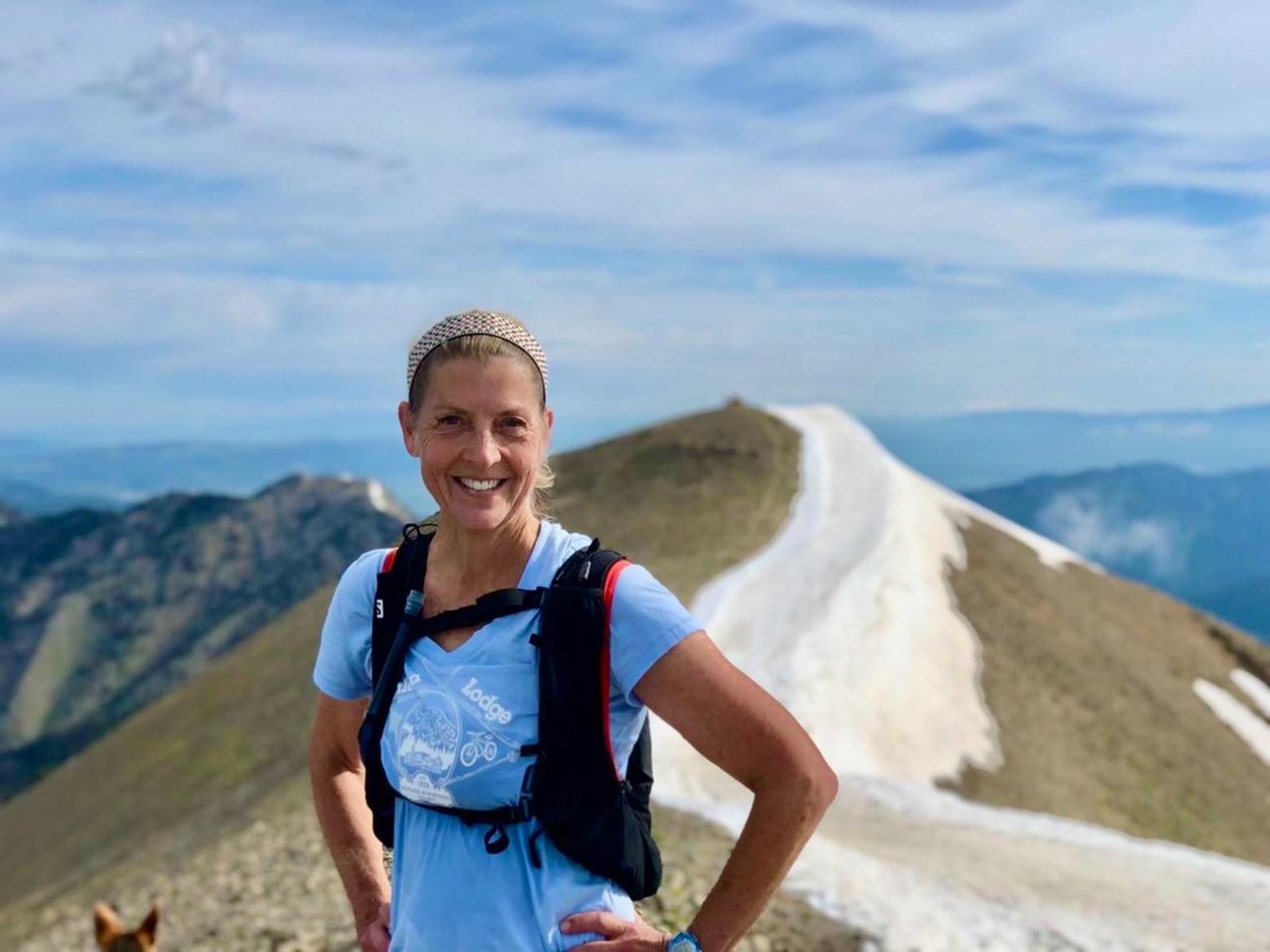 After Lisa Diekmann was chosen in the 1990s to lead the Yellowstone Park Foundation, she worked closely with then-Superintendent Mike Finley to build the organization into a national park friends group that commanded attention and respect nationally. Current Park Superintendent Cam Sholly believes Diekmann can return Yellowstone Forever to that same place again.
Yellowstone Forever, the prominent non-profit “friends group” that exists to fundraise and support the betterment of Yellowstone National Park, has named Lisa Diekmann of Bozeman, Montana as its new chief executive.
Diekmann’s selection represents not only the hiring of a seasoned leader in philanthropy from inside the region but in the case of this veteran with 28 years of fundraising experience, it means coming full circle, as she again takes the helm of an organization she led decades ago working closely with then-Yellowstone Superintendent Mike Finley.
In responding to the announcement by Yellowstone Forever of Diekmann’s hiring Monday, Finley said, “She was the right woman when we established the Yellowstone Park Foundation years ago and she is the right woman now to provide leadership and direction following the misadventures that caused damage to Yellowstone Forever,” Finley said.
Finley is speaking to many months of recent upheaval related to organizational debt, morale problems,  departing staff and the resignation of Yellowstone Forever’s CEO Heather White and other top executives. The trouble started after the Yellowstone Park Foundation in 2016 was rebranded as Yellowstone Forever and merged with the Yellowstone Association.
The Yellowstone Association presides over several historic structures, has operated gift shops, public bookstores  and run popular outdoor learning programs through its field unit, the Yellowstone Institute. Perhaps the best-known fixture of the Yellowstone Institute has been the Buffalo Ranch located in Yellowstone’s picturesque Lamar Valley, celebrated for its exceptional wild wolf watching.
Diekmann made it clear Monday she intends to refocus and rebuild Yellowstone Forever, working closely with Yellowstone Superintendent Cam Sholly, his staff and the organization’s board, using the widespread adoration for America’s first national park as a cornerstone.
“It’s an honor to be chosen for this role at Yellowstone Forever at this critical point in time for the organization and to have the opportunity to support the world’s first national park along with the talented and dedicated team at Yellowstone Forever,” Diekmann said. “I look forward to developing a successful plan for the organization’s future, including the re-start of the Yellowstone Institute, and to enhancing relationships with our partners and supporters.”
Diekmann is the current board chairman of Mountain Journal and she intends to remain on the board but will step aside from that leadership post to focus her full attention on Yellowstone Forever.
Most recently, in a professional capacity, she has served as director of development for the Bridger Ski Foundation and regional director of development for The Wilderness Society. Earlier in her career, this avid outdoorswoman and native of the Pacific Northwest was a financial analyst for Goldman Sachs in New York City and director of development for the Yale School of Forestry and Environmental Studies. Diekmann holds both a master’s degree and a bachelor’s degree from Yale.
She and her late husband, Alex Diekmann, widely regarded for brokering several mega-land deals with The Trust for Public Land in the Northern Rockies that benefitted wildlife, rivers and public access, raised two sons who are now both in their 20s. Them being older ensures that she has time to commit to the huge task at hand.
As chief fundraiser for the Bridger Ski Foundation, Diekmann serviced a crucial role in its transformation into one of the most noted community ski organizations in the country with a strong shared culture of skiing across three unique disciplines—alpine, Nordic and freestyle skiing—as well as a 70-kilometer network of community Nordic trails.
Helping it achieve greater capacity has enabled the Bridger Ski Foundation to work with local partners in expanding the popular groomed cross country trail network, attracting top-flight coaches to lead its ski programs and enhancing Bozeman’s appeal as a small livable city. 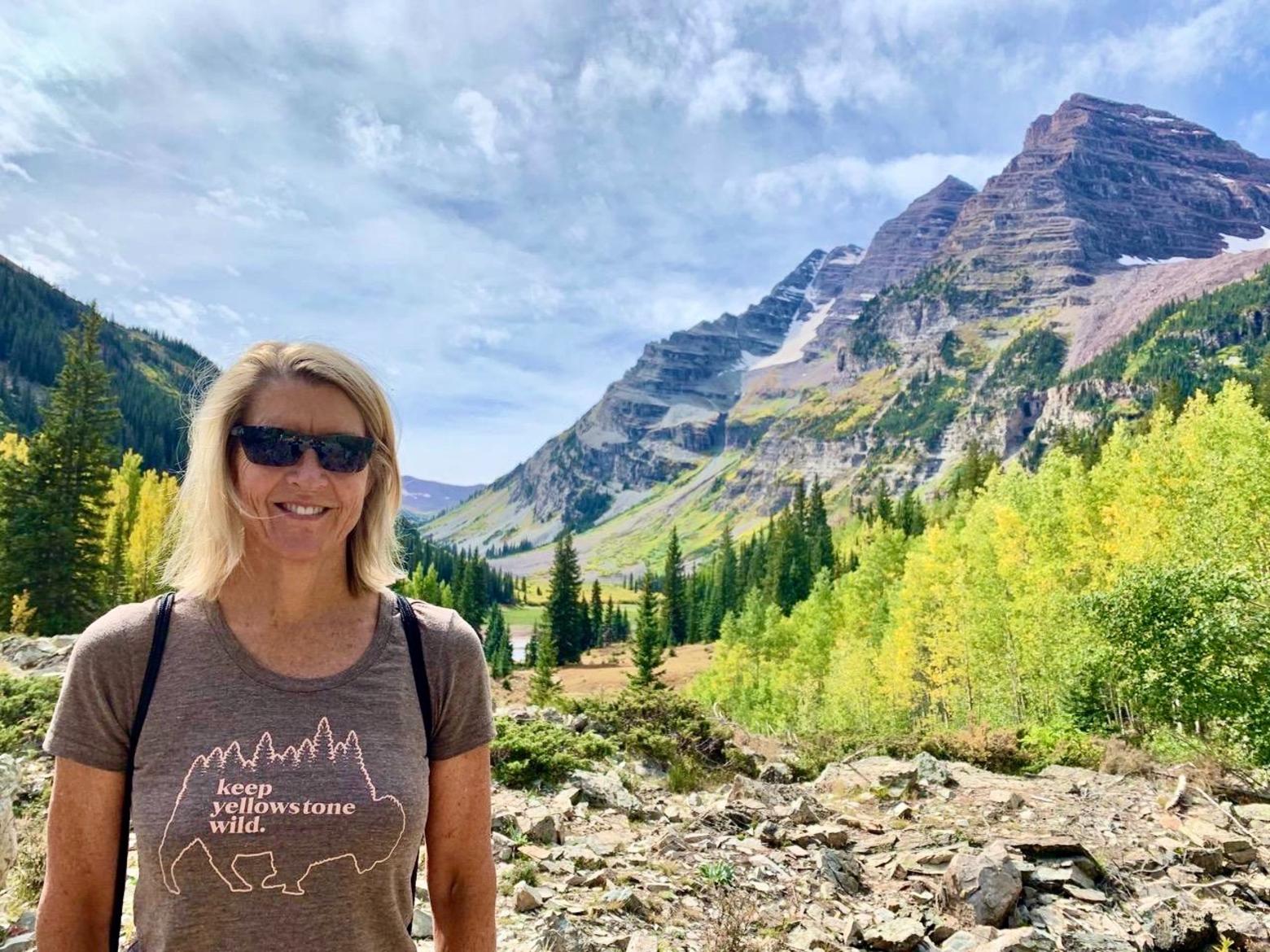 Lisa Diekmann wearing one of her Mountain Journal tees in Yellowstone.
Yellowstone’s Sholly said it is Diekmann’s knowledge and passion for both the park and integrity of the Greater Yellowstone Ecosystem, as well as her financial background and superb networking capabilities, that made her the top candidate to lead Yellowstone Forever forward.
“Lisa is exactly the right person for the job. She knows Yellowstone, our communities and partners and has a proven track record of success. I commend the Yellowstone Forever board on selecting such a high-quality candidate, and we look forward to working closely with her to make Yellowstone Forever one of the best park partners in the country,” Sholly said.
Yellowstone Forever Board Chairman Kay Yeager, who is retiring after serving as head of the board for 16 years, including during the organization’s merger three years ago, said it is important that people consider the legacy of the organization and its many noteworthy contributions.
“Yellowstone National Park is one of the world’s greatest treasures, and I’ve been honored to serve in support of the park,” Yeager said in a prepared statement. “We’ve accomplished a considerable amount over the years, including the merger of the Yellowstone Association and YPF and since the merger have raised more than $23 million for the park. With a new leader in place, this is the right time for me to retire from the Board. I’m confident Lisa will be an outstanding leader, and I wish her much success.”
Nationwide, the organization has been vaunted as one of the outstanding national park friends organizations over the years and has benefitted from an enthusiastic convergence of private citizens, corporate donors and non-profit partners rallying to help Yellowstone address its needs.
Among its highest-profile projects have been helping the park battle the illegal introduction of lake trout in Yellowstone Lake, supporting globally-recognized wolf research, building the new visitor center at Old Faithful, restoring the historic Roosevelt Arch, less heralded infrastructure challenges and bolstering the park’s public education programs.

When Finley, who was the top executive in Yellowstone, Yosemite and Everglades, was asked how important friends groups are to crown jewel nature preserves, he said, “Our national parks have never been appropriately funded. Over my 32-year career there were only two years where we received sizeble budget increases but usually we were engaged in some kind of debt reduction program and always in competition with other aspects of the federal domestic budget.”

Finley says that even without the challenges of Covid-19 Yellowstone has struggled to address its deferred maintenance backlog and to adequately staff its rangers, naturalists and interpreters who are the beloved human face of the park and where life-long connections to Yellowstone begin for visitors.

“The ranger ranks are down by 20 percent from previous personnel levels. And, for the foreseeable future, as beloved as the parks are, they are going to be living on less than a shoestring,” he said. “There has never been a more critical time for having a funding partner and supporter to help Yellowstone remain the wonder it is.”

Good news for many of the Yellowstone faithful is that Diekmann hopes to re-open the now-closed Yellowstone Institute in 2021. One of the Institute's most beloved features is its field station at the historic Buffalo Ranch in Yellowstone's Lamar Valley, where wildlife watching excursions, ecology, photo and art workshops have been popular with the public. Photo courtesy Jim Peaco/NPS
Finley believes the public will rally around Yellowstone Forever again. “Lisa has enthusiasm for Yellowstone that is genuine and people sense it in her. It’s why she was so successful the first time around,” Finley says. “People are going to be watching closely to what she does but she has the credibility to restore their confidence and  inspiration.”

Diekmann  plans to spend the first few months of her second tenure solidifying a new operational work plan, connecting with board, staff and the long list of dedicated park supporters. One priority already identified is re-opening the Yellowstone Institute in 2021.

“Yellowstone Forever has seen a strong recovery in its philanthropic efforts in recent months. Its retail locations now open are stable and busy, despite the impact of Covid-19,” she said. “I am optimistic that circumstances will allow us to re-open the Institute in the near future.” She knows it has been a touchstone for a lot of people, visitors and alumni, alike.
Increase our impact by sharing this story.

GET OUR FREE NEWSLETTER
Never Miss A Big Story!