The Mighty Return Of Tatanka 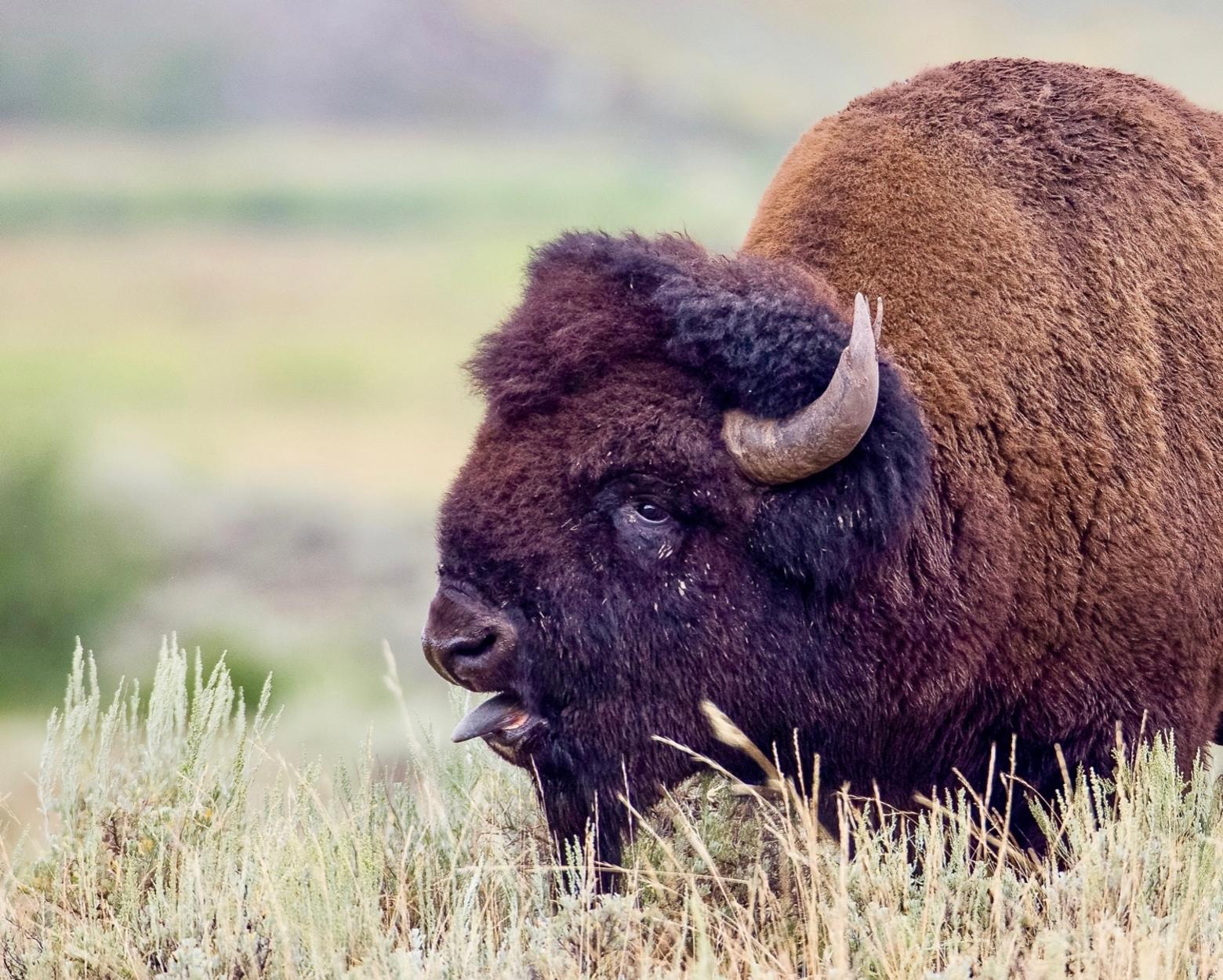 A bison bull, some of whose descendants are bound for Fort Peck. Photo courtesy Neal Herbert/NPS
Hope and transcendence runs on four legs. Late summer has brought a bit of both to the Fort Peck community of Lakota/Dakota and Assiniboine on the high high plains.
Elder Lois Red Elk was among those who welcomed the arrival of 55 bison bulls from Yellowstone National Park that may serve as seedstock for repopulating parts of Indian Country with its venerable totem of sustenance.
"What a fantastic few weeks we've had here in northeast Montana," Red Elk writes to the Mountain Journal faithful and sharing a pair of poems—one newly penned to mark the occasion mentioned above; the other that was featured in a reading presented at a recent High Plains Book Festival event in which a volume of Red Elk's poems was up for an award.
"After months of planning with so many agencies, our tribes saw the return of several more Buffalo to our homelands," she says. "I remember my father telling me a story his father passed down, that the Buffalo is one of the lesser gods that live here on earth."
"The Tatanka in creation became one of the gods to guide us in
our earthly life," Father said, noting that the Buffalo was also the chief
of all the 4-legged." 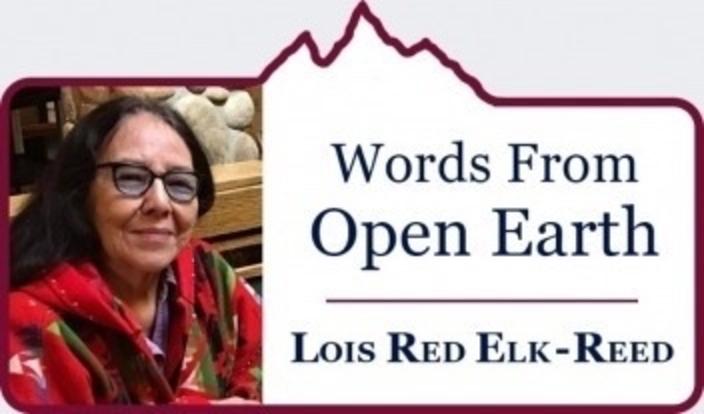 Two years ago, Red Elk traveled to South Dakota  with a group from Fort Peck, sponsored by the World Wildlife Fund, to visit other buffalo tribes and Wind Cave, a public preserve that, like Yellowstone, serves as a refuge for wild bison. "Wind Cave is significant in our Dakota/Lakota creation and emergence stories.  It is there where we came from a life in the womb of the earth into our life as humans on earth," she says. "Always in my mind and life when wonderful changes happen, I go to my language and stories and there find the reasons and lessons as answers."
At long last, after fits and starts and an ongoing slaughter of Yellowstone bison crossing into Montana, animals that have passed through quarantine to ensure they are not carriers of brucellosis are going back to the heart of their native range.
"I've wanted to write so much about the Buffalo ever since they
started to return to Tribal land during the past several years. Now I
have several stories and poems accomplished," Lois notes.
This month she is sharing "Buffalo Spirit" inspired by the recent homecoming that met with an honoring ceremony by people at Fort Peck. The second work is a poetic narrative, "Sleeping at the Fort" that speaks to a vision Red Elk had of buffalo reappearing again.  The work appears in Red Elk's acclaimed volume, Why I Return to Makoce (Many Voices Press, 2015).  Let both works move you.  —MoJo editors 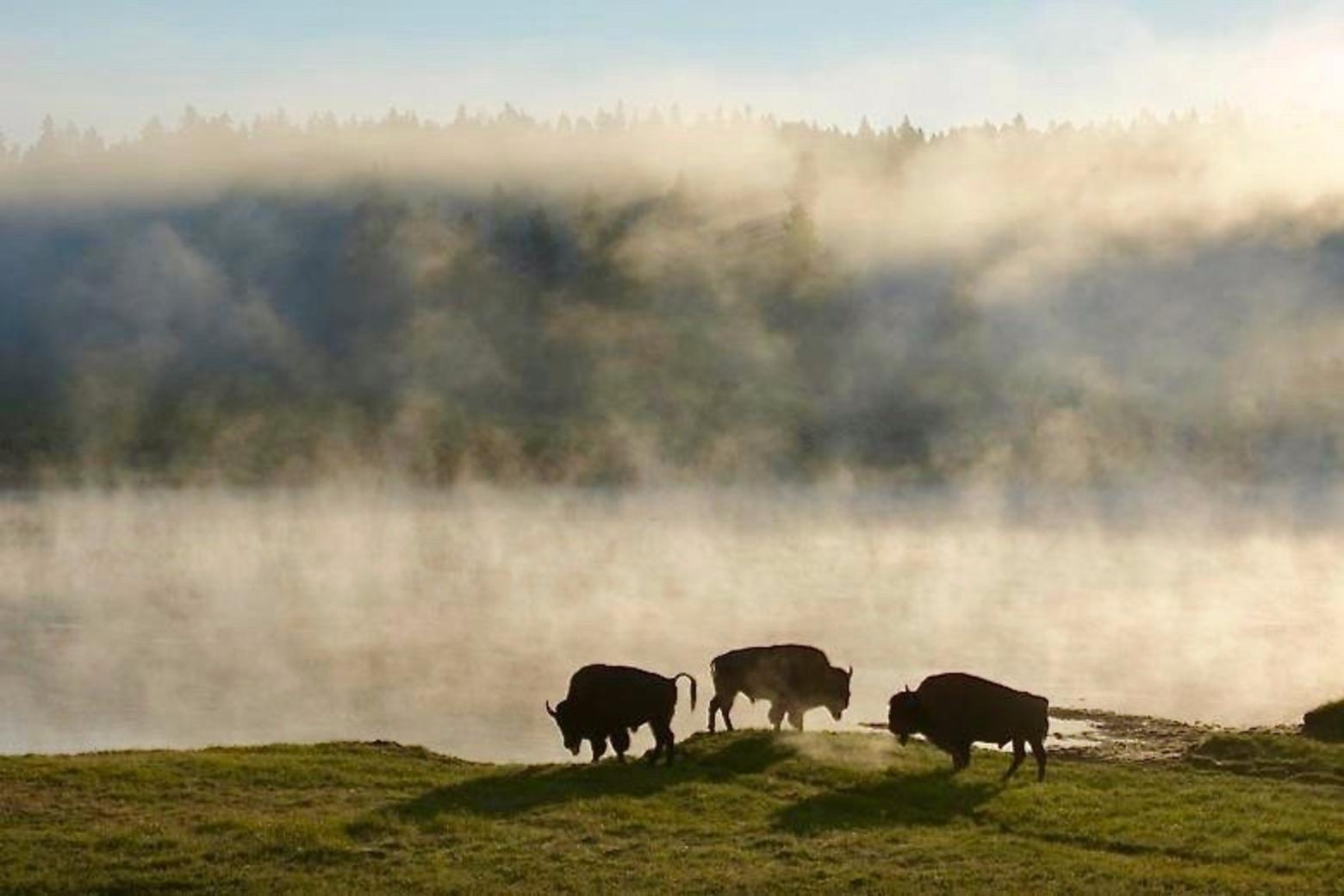 A band of young Yellowstone bison. Photograph courtesy Steven Fuller
Buffalo Spirit
Somewhere in beginnings, when light was
extended from Inyan the stone, hoof prints
were set for our path into relativity. We
existed there within the value of nature,
common beings where original womb was
the core of Wind Cave.  Our soul, our essence
was of the 4-legged, a spirit breathed into the
life body of Pte, the Female Buffalo for our
awakening.  I longed for that time, where
Tatanka Sicun, Buffalo Spirit as ancestor,
mingled with mine, a conception from the
power and matter of the hallowed, from the
one they call Taku Wakan, the Unknown
Sacred.  It was a divine plan for our future
life, a guide for our earthly life, two in one
soul.  Then yesterday it came, as expected
in this mind, transformed to the sacred level,
to be understood for these times.  It came
in the form of trucks and trailers carrying
sacred beings into the realm of our higher
plains, the kind that honor land as Maka
Unchi, and Maka Ina, Grandmother Earth,
Mother Earth, giver of all life. It came as
moral knowledge, in collaboration with
like believers, perpetrations of wisdom, of
heart, of prayer, and from above. For this
believer, our twin hearts, our twin spirits
sprinted out of eons of demise and back into
our lives.  Their essence, a buoyance of
energy filling the present time with new air,
new thoughts, new prayers, new dreams for
our night time mingling. We roared with love,
with ceremony, with food, with appreciation.
All of us, the Tatanka Oyate, the Ikce Oyate,
the common people and the spirit of all living
beings, we roared the way we will always
remember from the voices of Wind Cave.
©Lois Red Elk 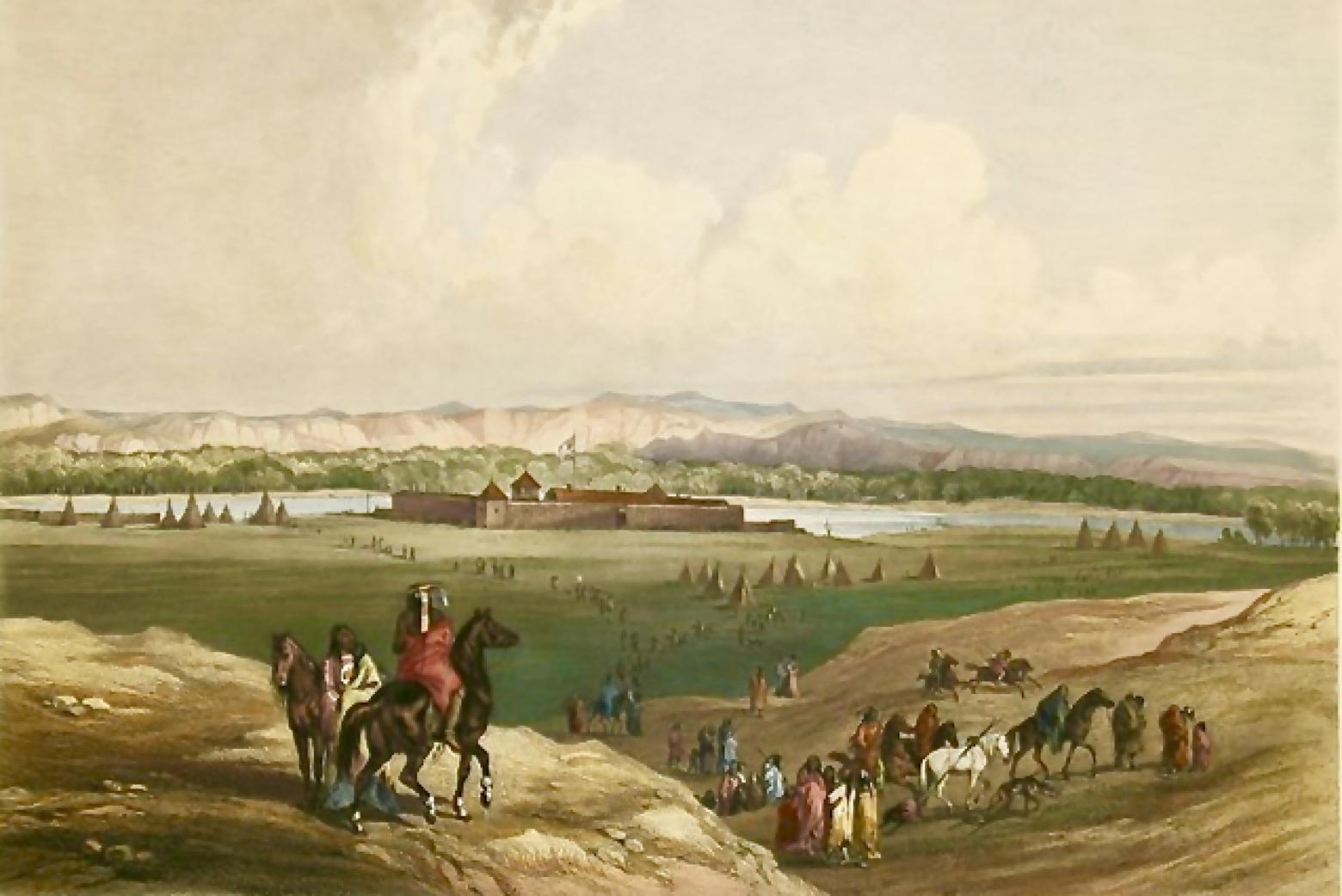 Painter Karl Bodmer made this portrayal of Fort Union along the Upper Missouri, based upon sketches, after he and his patron, Prince Maximilian of Weid, traveled upriver in 1833. The work is considered an accurate depiction of the fort which functioned as a meeting place between fur trappers and traders, indigenous people and, later, a place where Cavalry soldiers were garrisoned. Image courtesy National Park Service.
Sleeping At the Fort
During the summer my sister and I are invited to participate in an annual
Indian Arts Showcase at Ft. Union.  Artists arrive from Montana and North
and South Dakota for the weekend event.  The site is located on the open
plains near the Missouri river where steam boats used to travel.  At one time herds of buffalo also followed the river making a trail East and West from the Dakotas into Montana.  It is a serene place for artists to gather, greet visitors and enjoy the scenery.  After a full day of selling and visiting the  artists retire for the evening.  Some camp in vans in the overnight parking  and some stay at motels at nearby towns.  My sister and I travel a lengthy  distance so once in awhile we are offered accommodations at the Fort.  One year all the ranger quarters were full with volunteers helping do repairs  around the grounds so we stayed inside the Fort. We chose the bastion on  the North East side so we could catch the early morning sun.  The rangers  allowed us use buffalo robes for bedding.  After we settled for the evening  we could see stars through one of the upper windows.  Soon clouds drifted  in and the sky turned black.  During the night I was awakened by singing that came from the direction of the river.  I thought some of the campers had decided to walk along the river.  Shortly after that I heard the voices of  baritones harmonizing an old southern style spiritual. Then it was quiet.
As I was falling asleep I heard a distant rumbling.  At first I thought it was
thunder, but it seemed too steady and was gradually growing louder.  I could  feel a slight movement under the floor, like a small earthquake.  Living in Los Angeles for 15 years I was familiar with the ground moving all the time  but this didn’t feel like a quake. I thought about it then realized the sound  felt like a large herd of animals moving in a steady walk toward water or toward a feeding site.  I lay there trying to figure out where they came from then the thought came to me that the sound was in fact a herd of Buffalo.
We were always told of the relationship of respect that our family had for
them and I believethey were there to greet us. Somewhat relieved, I fell
back to sleep.  Again the rumbling started so I raised my head slightly and
could hear what seemed like heavy animals like bulls pawing the earth,
almost like when horses are restless.  The ground was shaking slightly and
I heard the low roar of grunting coming from deep in the chests of huge
buffalo.  I lay there covered in a buffalo robe and felt like I was part of
the motion, part of the earth remembering the crossing created on familiar
trails.  Several of the animals stopped at the corner of the concrete bastion
because I could hear something rubbing on the edge of the building.  I had
heard horses rub their bodies on the old log houses when I was a child and
remember the distinct noise, like a scraping of heavy thick fur on something
solid.  It was almost unnerving to lie quietly and listen.  The hooves of
many animals moving across the earth made me feel like I was witnessing
a massive action that only my ancestors were privileged to.  I closed my
eyes and tried to imagine what I was hearing. As I lay there the rumble
was moving away.  The sound of hundreds of animals became less as the
sound slowly became more and more faint.  All I could do was listen to
the quiet.  I didn’t feel like I needed to get up and look outside.  In my
heart I didn’t want to see the buffalo leaving. Again, I fell back to sleep.
I felt a satisfaction coming from ancestor’s memories, and I felt blessed.
In the morning I inquired of the other artist if any of them were signing
down near the river.  They had not, but had heard that unusual sounds are
heard around the Fort.  We all joked about it and said no more.  Later I
asked the Fort Ranger about the singing and he assured me that no one is
allowed by the river at night.  He did confirm that many hear voices and it
is not unusual.  I didn’t tell him about the herd of Buffalo that went by.  I
thought I’d share that some other time.  My sister told me I was privileged
to hear those spirit-kind and together we offered prayers to Maka Unci
and the Tatanka Oyate (Grandmother Earth and the Buffalo Nation) for
verifying our connection and blessing us by allowing us to hear their
spirit movement and ancestral conversation.
©Lois Red Elk