Two poems by Lois Red Elk remind that neither we, nor animals, are "others" in the natural world 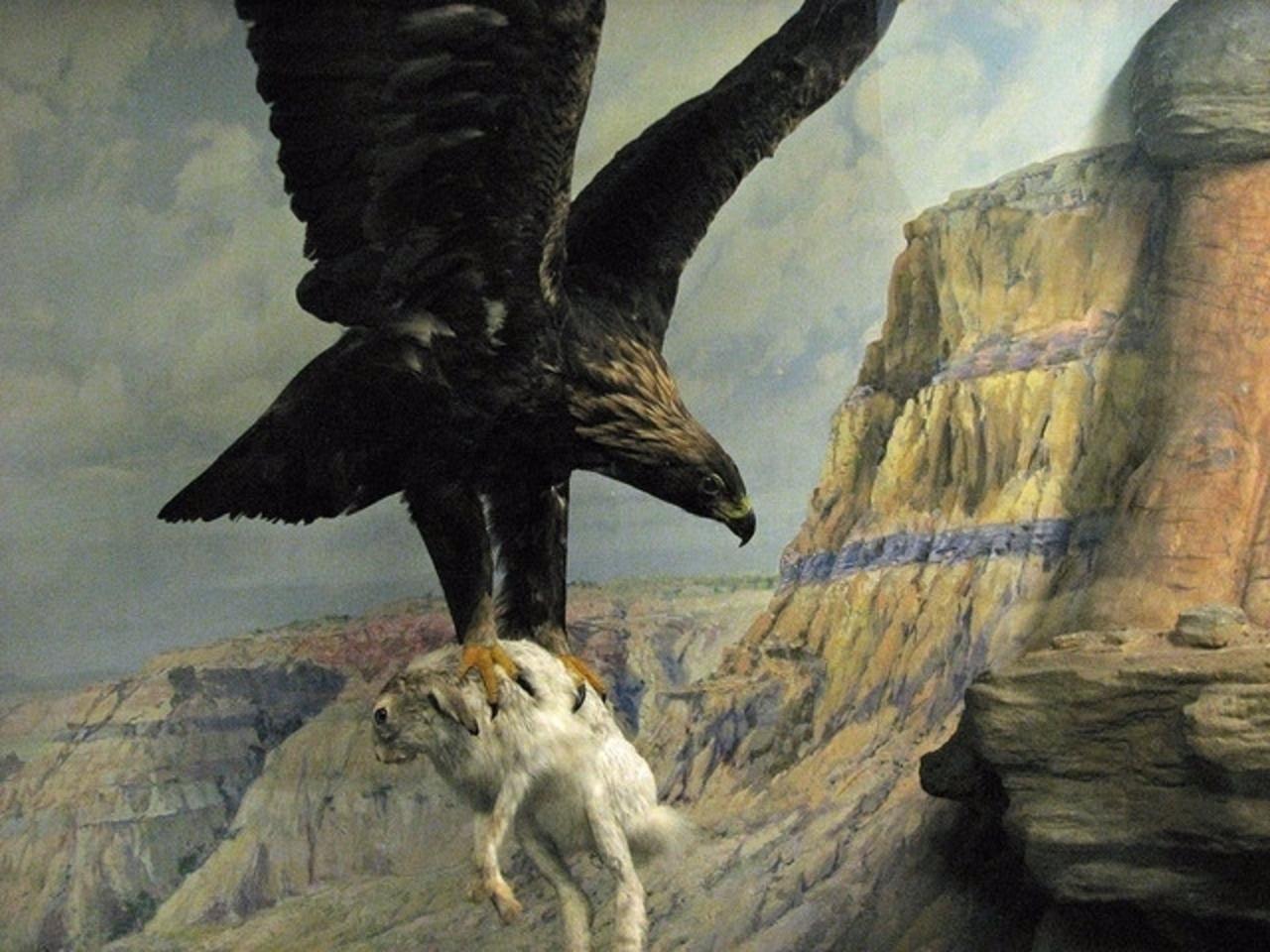 Golden eagle hunting, part of a diorama at the Field Museum in Chicago. Photo courtesy Steve Richmond/Wikimedia Commons
Mountain Journal's friend, Josiah Blackeagle Pinkham (Nez Perce) is an ethnographer. He's shared many observations, including something that frames the way we think about the true Old West.  Places, he said, were not named after people the way buildings, highways and landmarks often commemorate wealthy philanthropists, politically-connected individuals, war heroes, celebrities and beloved citizens. 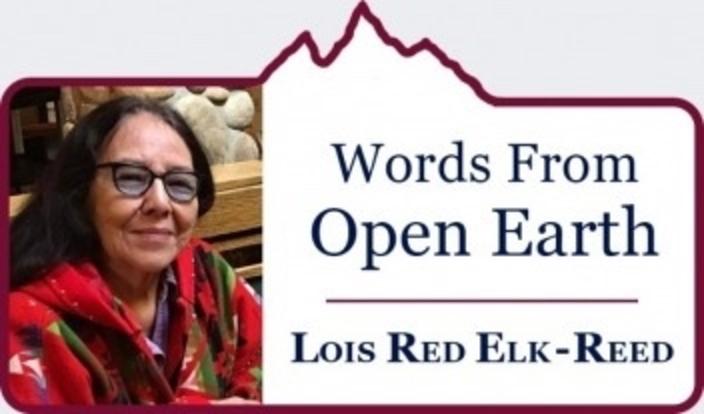 With many nations, reference points in the map of oral tradition are descriptive terms of the land does, ecologically what happens there, or what wildlife might be common. In Montana, for instance, the Crows, whose homeland extended across a huge southwest sweep of the state, including today's Greater Yellowstone Ecosystem, referred to the Yellowstone River as E-chee-dick-karsh-ah-shay or "Elk River." It's a reminder of how wapiti were a prolific species on the plains and high prairie.
Lois Red Elk returns here with more animal stories. She refrains from calling non-human sentient beings "wildlife;" instead, they're neighbors.  They are not "others;" they are community members inseparable;  often, their appearances and communiques carry meaning. With this edition of Red Elk's column, Words From Open Earth, she shares a brand new poem and another from her critically-acclaimed volume, Why I Return To Makoce that was nominated for a High Plains Book Award. —Mountain Journal eds
Eagle Kill
Driving up north one weekend I came over a hill and saw huge
dark wings waving and slapping the ground.  As I was at the wheel
I didn’t want to take my eyes off the road, so I slowed, did a u-turn
and headed back to the base of the hill, the site, but I didn’t see
anything so I did another u-turn and focused on getting to my
destination.  Again as I descended the hill, in the rear view mirror,
giant wings of some great bird looked to be struggling, dust
rising in little clouds.  I slammed on my brakes and jumped out of
the car without knowing what I would be facing. There, under a
huge shadow of sage brush was a large eagle. It looked at me like
it wondered what I wanted then seemingly snapped its yellow eyes,
turned around, bent it’s large curved beak and jerked up a string of flesh.
I remember looking past the claws and saw a large jack rabbit held
tightly in a death grip while blood seeped from the light fur just under
the talons.  The look in the rabbit eyes was terrifying—a wide circular
stare that seemed to sense the coming of something horrible.  Its
body was stiff from fright and as I watched it turned an unsteady gaze
my way.  The jack rabbit was huge and almost ran away with the eagle
attached to its back, but the wings provided lift and balance.  Again in
a flash I saw another strip of fur being ripped from its neck, then I heard
the rabbit scream.  Petrified I watched as its entire body went limp.
The large wings that I had seen floundering earlier was the beginning
of a struggle between food for life and a life sacrificed for food.  When
the eagle paused to look at me I watched what I was so curious to see -
a play of life and death on the high plains of my reservation.  I was
given an example of the reality of life among the weak and strong.
©Lois Red Elk 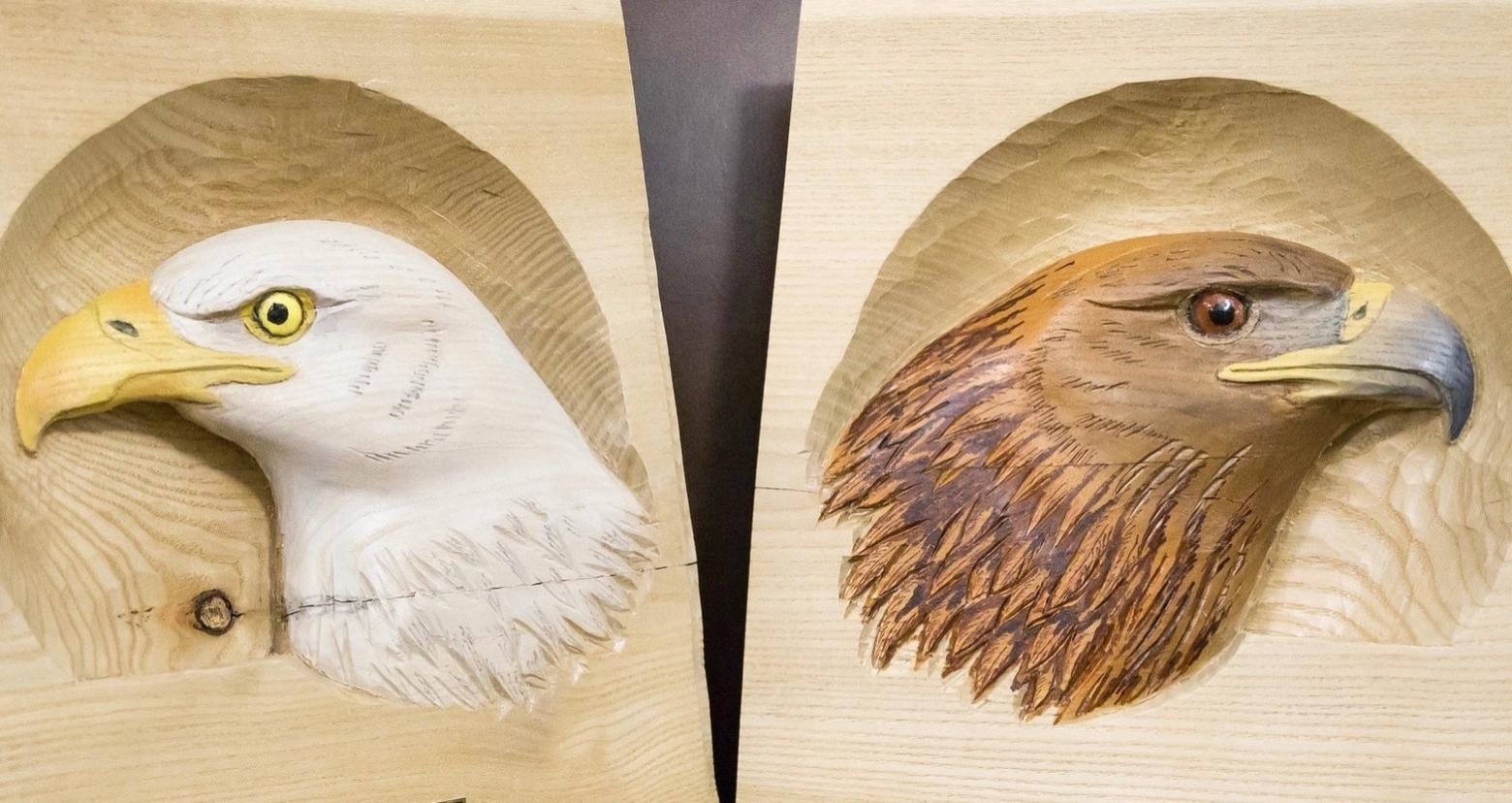 Image courtesy US Fish and Wildlife Service
The Eagle and Hawks Catch a Ride
Grandma Lois was outside shaking out her car rug when a flock
of birds flew over.  They looked down and said, I bet she’s going
somewhere.  She always cleans her car when she’s getting ready
to go shopping.  Grandma looked up and watched the birds head
toward the river.  She thought she better hurry and get going.
She and grandpa got ready, loaded the car with water and a blanket
to sit on. The sky was clearing.  It would be a good day to travel.
Grandma called her sisters and told them she and grandpa would be
on the road all day in case they were wondering. They went to the
gas station first, then headed east, down the highway.
Just as they reached the top of the ridge they saw a large bird sitting
on a telephone pole.  All of a sudden it took flight and landed right
in the middle of the road in front of them. Grandma said, “Look at
the size of that bird, it looks like a little child.”  Grandpa slowed
down, then came to a full stop.  The bird, a large Eagle, just sat there
then motioned grandpa to pull the car over.  By this time, Grandma
Lois was getting upset, because this was the fourth time they were
stopped by this Eagle.  The Eagle waddled to the side of the car and
asked grandma if he could catch a ride to the next town.  Grandma
said, “Why?” Eagle put his head down in embarrassment and said,
“I hear Jar-Mart has some real tasty salmon for sale.”  Grandma
shook her head then agreed and let Eagle get in the car.  As they
went on down the road, grandma was thinking how silly it was to
have an Eagle sitting in the backseat.  What would people think?
As they approached the next valley, they were surprised to see two
hawks flying alongside the car.  “Oh no, what next!” said Grandma.
She didn’t want to look, but finally gave in and rolled down the
window an inch.  One of the hawks said, “Stop the car!”  Grandma
angrily rolled the window all the way down and asked, “Why?”
“We need a ride to Jar-Mart, we hear they have some real thin strips
of wood there.”  Grandpa started to laugh and said, “See, I told you,
once you give them rides, they will keep wanting to go with you!”
So, there they went, grandpa and grandma, with Eagle and the two
hawks sitting in the back seat of the car.  All the way over there,
the birds kept whispering.  Finally, Grandma turned around and
asked what they were whispering about.  The hawks said they were
trying to figure out how they were going to get into the store without
everyone causing a panic.  Finally, Eagle said he had a solution.
When they arrived at Jar-Mart, Grandma and Grandpa got out and
went into the store.  They shopped for about half an hour when all
of a sudden Grandma noticed a short person walk by with a blanket
over their shoulders that looked just like hers. She thought that was
strange.  After they finished shopping, Grandma and Grandpa took
all their shopping bags to the car, but the birds were nowhere in sight.
Just then she heard a squawking behind her, so she turned around
and there were the birds, under her blanket. She pulled the blanket
off and saw that one hawk was sitting on the other hawk's shoulders
and that hawk was sitting on the shoulders of Eagle.  All of them
had their bags, and the bags were full of salmon and strips of wood.
Grandma looked at them for a moment, sighed, and said, “Get in the
car!”  All the way home she wondered how they paid for all their
stuff, but she was to weary to even ask them.
©Lois Red Elk