April Craighead says between development and surging recreation pressure on public lands, nature is getting pounded around Bozeman 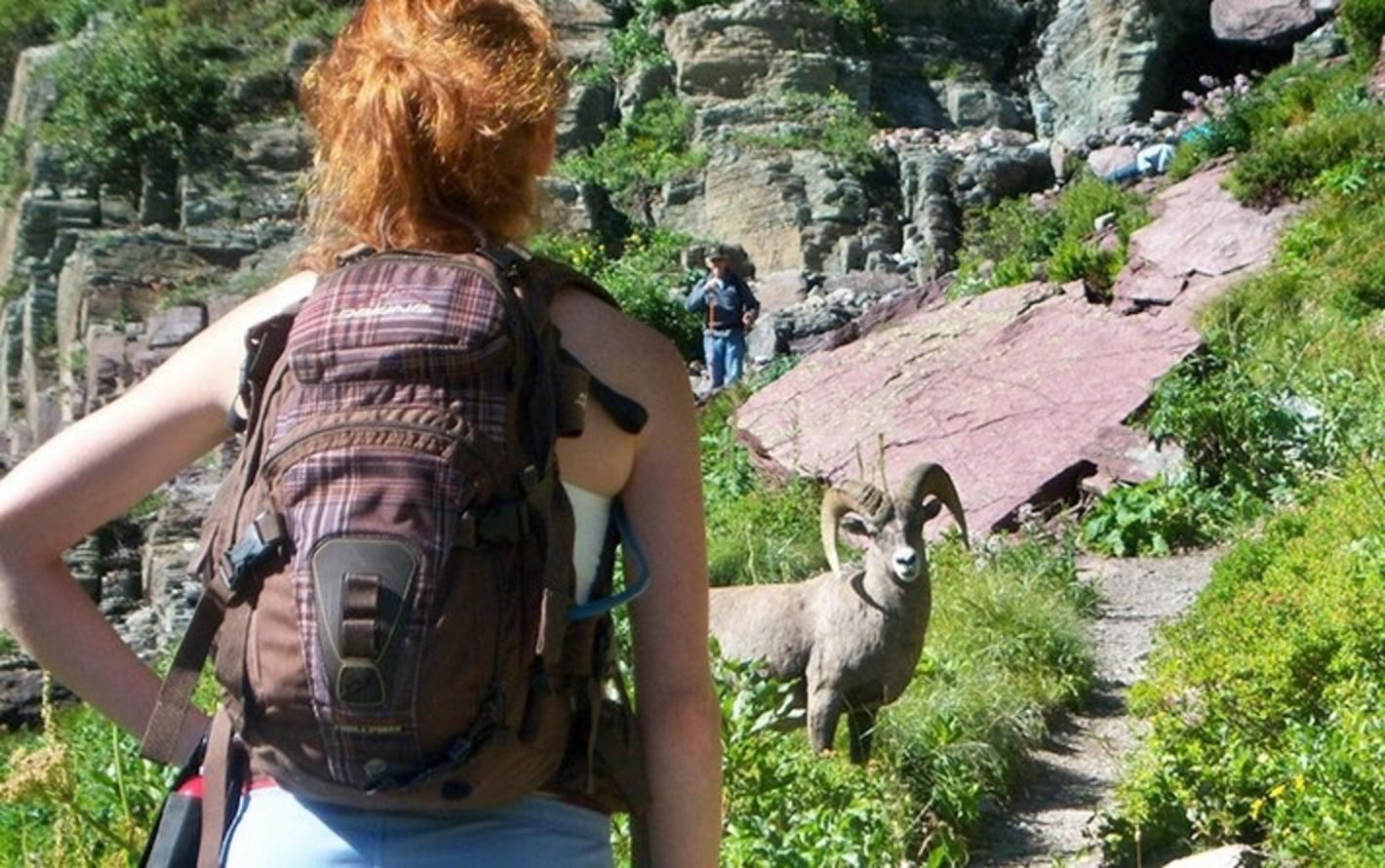 How much intense human pressure can wildlife take and what is lost of the character of wildlands when we drive animals away? Photo courtesy Stephanie Metzler/NPS
By April Craighead
Bozeman’s increasing growth comes with many challenges, including affordable housing, parking and urban sprawl. This is one of the fastest growing small cities in America. People are moving here in droves and most of them recreate in public lands adjacent to Bozeman and surrounding communities.
We only had to look at the packed trailheads this summer to see the writing on the wall; our public lands and trails are being impacted like never before. Even recent reporting from The New York Times, Washington Post and Mountain Journal have taken notice of our over-crowded trails and rivers and the influx of new residents fleeing Covid-19, and climate-driven difficulties, in other parts of the country.
This growth, and the ever-increasing pressure by all recreationists on our public lands, is fragmenting and damaging the natural ecosystems that these people have come here to enjoy. We happily point to motorized vehicles or mountain bikers as displacing wildlife, but the truth is that all recreationists pose risks to wildlife through actual displacement, increased disturbance and habitat degradation. 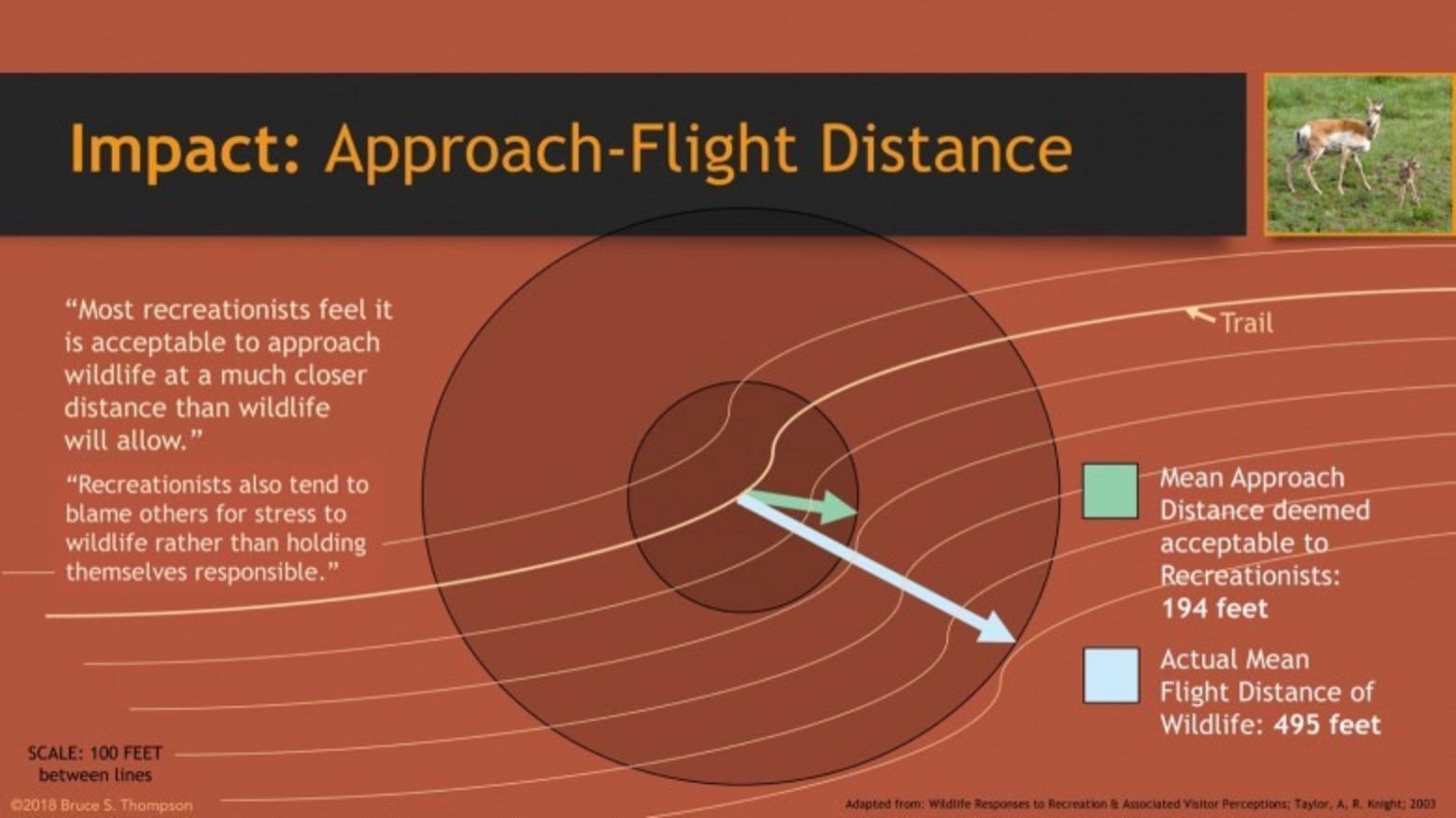 Graphic prepared by naturalist Bruce Thompson of Dubois, Wyoming. Used with his permission.
Some species are more tolerant of people than others: white-tail deer are found throughout the city of Bozeman but less tolerant species like elk are seldom seen near dense housing developments. Even black bears, which tend to shy away from people, can be found seasonally in or near Bozeman city limits indicating that food, and habitat, is in short supply elsewhere.
There are countless studies that document the effects of trails on wildlife. These range from breeding birds being displaced from nesting sites to elk actively moving away from popular trails. Researchers in Oregon found that elk readily move away from all forms of recreationists, including ATVs, bicycles, hikers and horseback riders as soon as they are perceived. Riding ATVs caused the furthest displacement of elk followed by bicycling, hiking and horseback riding which were not significantly different from one another.
If trails are closed or traffic declines for some reason then wildlife come back into the area. However, the results also showed that a trail can get so heavily used by recreationists that it crosses a threshold and that habitat becomes functionally unsuitable for wildlife.
Another part of the wildlife problem is that individual recreationists have distorted perceptions of their own impacts on wildlife. A study conducted in Utah surveyed recreationists regarding their views on displacement of wildlife, and found that of the 205 surveys given to recreationists, including hikers, mountain bikers and horseback riders, 50 percent of them did not think that their activity posed any threat to wildlife or caused displacement.

A study in Utah found that of 205 recreationists surveyed, including hikers, mountain bikers and horseback riders, 50 percent of them did not think that their activity posed any threat to wildlife or caused displacement. As mentioned, the data prove otherwise.

As mentioned, the data prove otherwise. Interestingly enough, most respondents viewed other user groups as causing more disturbance to wildlife than their own activity. Disturbance will undoubtedly increase in the future. So how do we plan for the future?
Some groups would argue that we just need to make more access with more trails and disperse people across the landscape. However, more trails will only expand the human footprint and degrade and fragment habitat even more. We all want to be able to head out on our favorite trail and see as few people as possible. Sorry, but those days are long gone and we need to acknowledge that.
Other groups contend that we can functionally freeze our recreational footprint as it is today; this is naïve. More people using the same trails will eventually eliminate those areas as wildlife habitat altogether. Aggressive recreationists will continue to build their own trails. Many of these will be incursions into existing critical wildlife habitat.

Some groups would argue that we just need to make more access with more trails and disperse people across the landscape. However, more trails will only expand the human footprint and degrade and fragment habitat even more. Other groups contend that we can functionally freeze our recreational footprint as it is today; this is naïve.

We know that more people are coming. Any future trail planning should include impact assessments of wildlife habitat and movements. Trail planning should consider seasonal closures and the possibility of no trail development in sensitive areas. Should new trails be placed closer to existing trails near already fragmented areas instead of through more pristine habitat? Recreationists must be part of the solution and acknowledge that their presence has detrimental effects on wildlife.
As a hiker or biker would you be willing to pay a fee like hunters and anglers to use public lands? Would you be willing to not poach a trail if it was closed due to elk calving or because it’s important winter range? Would a closed trail make you think twice before going around the gate? These are questions that we should be asking ourselves because now is the time to think about these options before we are overrun with people who are not thinking about wildlife.

April Craighead is a wildlife researcher who, along with her husband, Dr. Lance Craighead, founded Craighead Research, based in Bozeman. Trained in conservation biology and evolutionary ecology, Craighead has studied everything from the effects of climate change on high-elevation-dwelling pikas to the impacts of roads on wildlife movement across landscapes. She loves to spend time outdoors with her family and, in particular, living in a region still rich with mammalian and avian diversity.