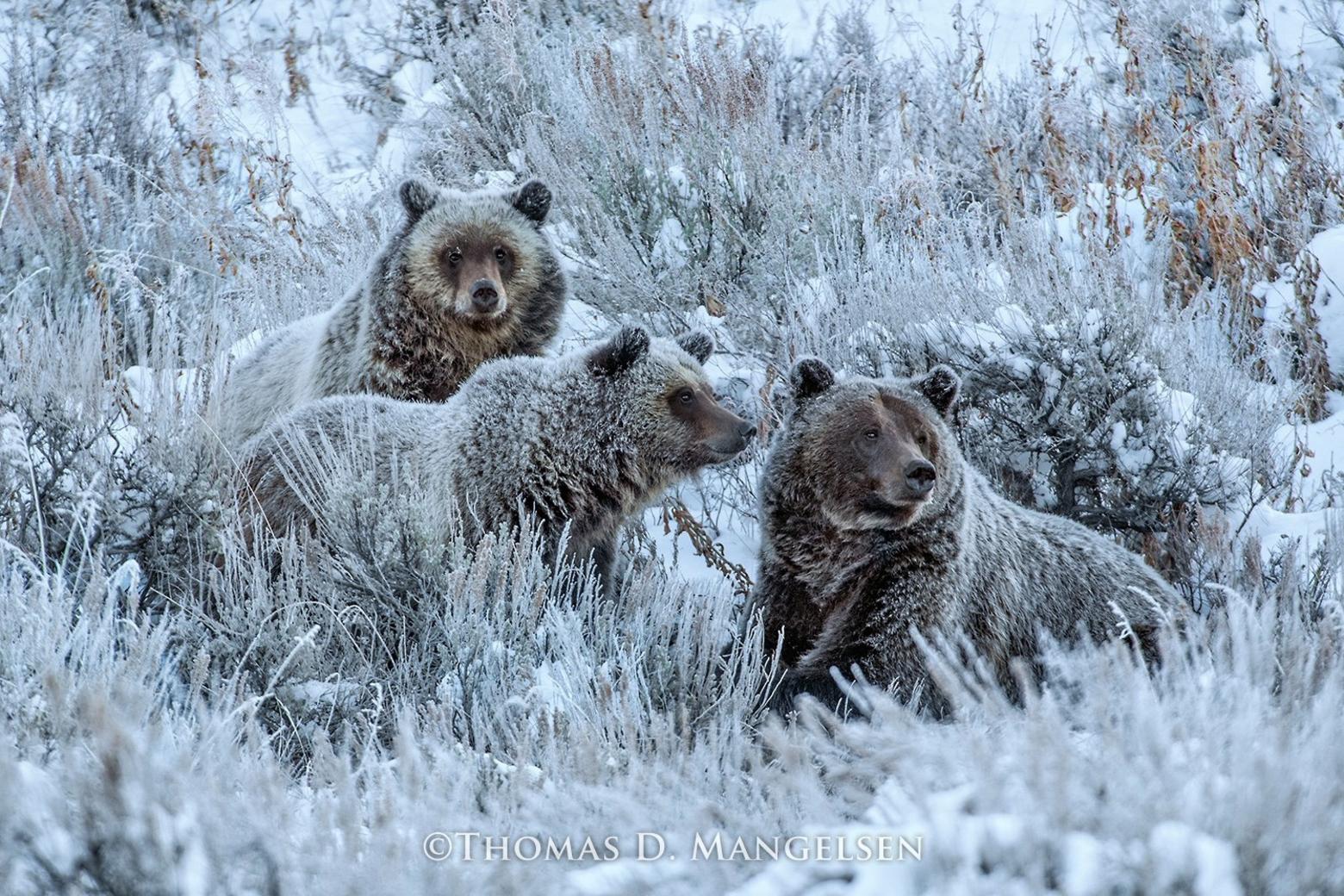 The dangerous navigations of Grizzly Mother 399 and cubs serves as a backdrop for larger questions surrounding the future of grizzlies and whether their conservation, called one of the greatest wildlife rescue success stories ever, can persist. Listen to experts weigh in by clicking on the video below. Photo courtesy Thomas D. Mangelsen. To see more photos of 399 go to mangelsen.com
by Mountain Journal
More than 1,000 people tuned in to watch a panel discussion about threats this autumn to world famous Jackson Hole Grizzly 399 and her cubs, the challenges facing grizzlies in general and how controversial new laws in Montana are undermining the miraculous conservation success stories with grizzlies and wolves.  You can listen to the entire discussion below.
About half of the audience listened in via Zoom and the rest on other social media channels. Since that time, tens of thousands have watched a recording of the special Grizzly Bear Town Hall co-hosted by Explore Big Sky's executive editor Joseph O'Connor and Mountain Journal founder Todd Wilkinson.
The discussion generated several notable newsmaking insights all its own:
° ° ° °Globally iconic conservationist Dr. Jane Goodall, best known for her work studying chimpanzees and who says she is a huge fan of Grizzly 399, made a surprise appearance and noted how individual bears like her have transformed the way humans think about the animals.
° ° ° °Dr. Christopher Servheen, who recently retired from 35 years of overseeing grizzly bear recovery for the US Fish and Wildlife Service, said he now has reservations about wether the three states of Montana, Wyoming and Idaho and actually up to the task of responsibly managing grizzlies if bears are delisted from federal protection.
Listen to what Servheen says in the panel discussion. He also noted that the greatest threat facing wildlife is misguided development now proliferating on private land in the region and rapidly rising numbers of people—recreationists—inundating grizzly habitat on public lands.
° ° ° °Dr. Jodi Hilty, president and senior scientist with the Yellowstone to Yukon Conservation Initiative explained how how the communities of Canmore and Banff, Alberta, located in the Bow River Valley at the front doorstep of Banff National Park, have adopted policies that have reduced human-bear conflicts.
Canmore mandates bear-proof containers, outlaws sloppy garbage behavior among citizens, issues harsh fines to back up the regulations and, in addition, there's a social atmosphere of admonition for those who break the rules. The communities also have imposed requirements that dogs be on leashes because domestic canines not only displace wildlife but heighten the possibility of a negative encounter with bears, wolves and cougars, she said.
Afterward, in a flurry of emails exchanged between panel participants and citizens, many see the Canadian model as a potential alternative to loose garbage storage regulations that abound throughout the Greater Yellowstone Ecosystem both at the county and municipal levels.
° ° ° °Renowned American nature photographer Thomas D. Mangelsen, who has made his home in Jackson Hole for nearly five decades, claimed that a recent attempt to capture and radio collar Grizzly 399 and cubs was botched by the US Fish and Wildlife Service and other collaborating agencies.  Two cubs of 399 were indeed captured and radio-collared.  Mangelsen said the intervention put the bear family in potentially greater peril but Servheen said knowing where the bears are enables agencies to better protect them, especially from getting in trouble by deepening their taste for human and unnatural foods. This week, 399 and cubs strolled into the town of Jackson, ambling through neighborhoods where trash was not secured and the bears were gently escorted back toward surrounding wildlands.
All in all, it was a lively, passionate and informative discussion. Mountain Journal thanks its friends at Explore Big Sky for handling the lion's share of technical details.