A Tribute To The Ancient Ones High On The Mountain 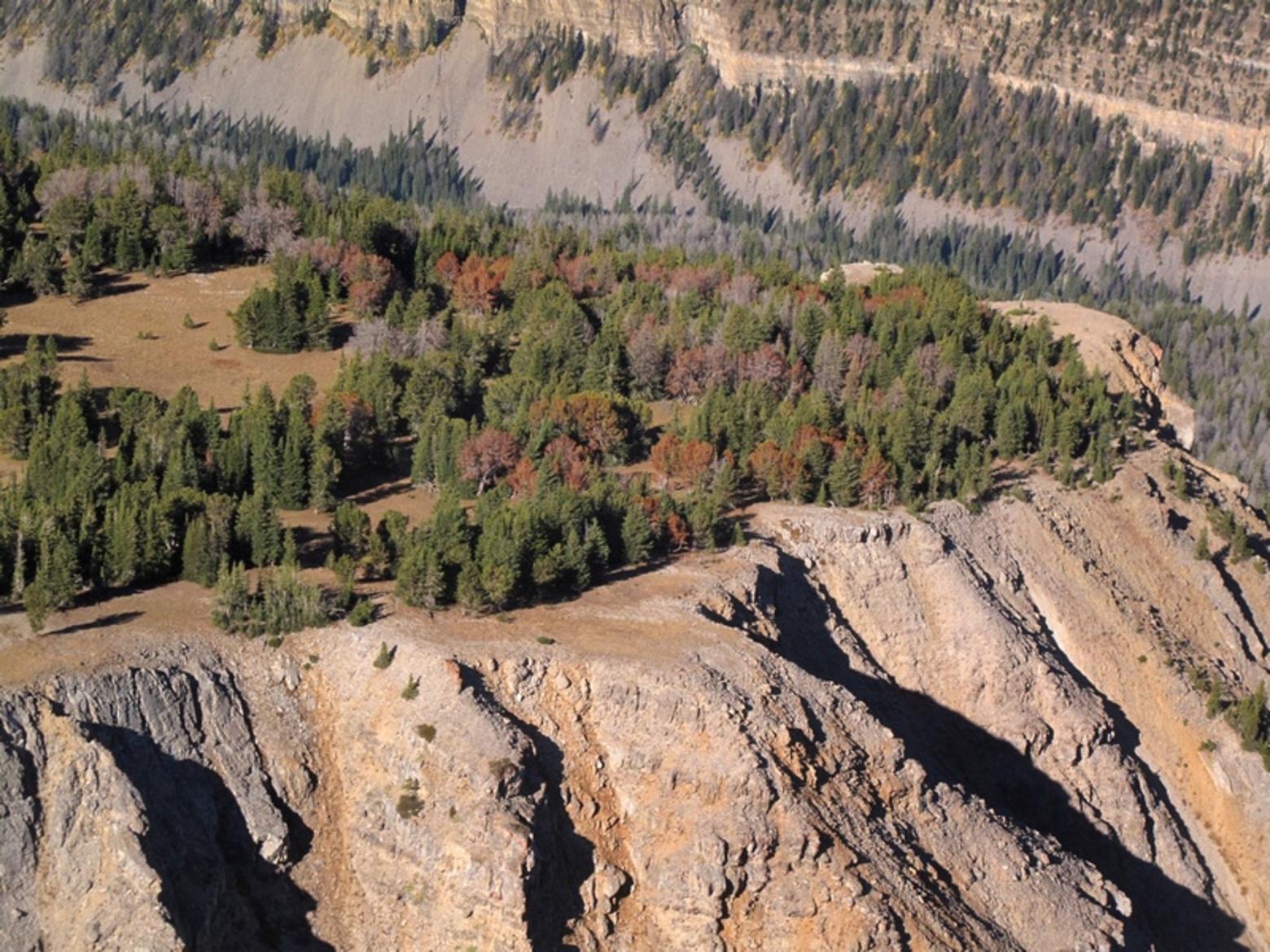 At the top of a ridge, a whitebark pine forest is in the fight of its life. Photo courtesy Ecoflight (ecoflight.org)
I grew up under the influence of great trees, including the magnificent aspen and ponderosa forests of southern Colorado. In later life, I've spent extensive time in places like the exotic southern beech forests of New Zealand, and have marveled at the ancient bristle cone pines of the Great Basin.
But no other tree, no other forest, has captured my imagination like the whitebark pine. I’ve thought about this some; I’m not sure if I love the whitebark because of where it lives, or I love where it lives because of the whitebark. Either way, this tree that can live—no thrive— for centuries in the highest, most remote, and seemingly inhospitable of landscapes, has assumed a role central to my being.
To some, the measure of a tree is board feet, and its value can be found on the bottom line of some corporate ledger. These folks might not find much of interest in what follows. For others, though, the measure of a tree is the biological community it supports, and the bottom line is the ecosystem it builds.


I should note here that ecosystem ecology is itself a confluence of scientists who bring their individual areas of expertise together and harness a broader range of thinking. That’s what modern systems ecology is all about, understanding how and why threads converge and form a more elaborate, interconnected mosaic. 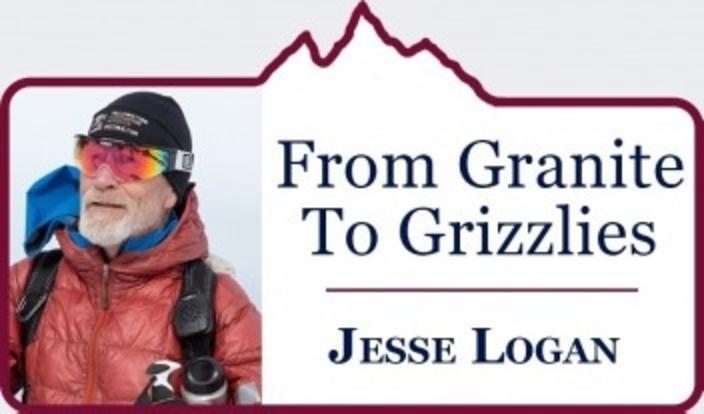 
Shortly after I retired from the Research Branch of the U.S. Forest Service in 2006 — seemingly few Americans realize that science has been, and continues to be, an important pillar of the agency — the U.S. Fish and Wildlife made the decision to remove the Greater Yellowstone grizzly population from protection under the Endangered Species Act.
I had looked forward to an idyllic retirement of fly fishing Yellowstone’s backcountry in summer, and skiing it in winter, but that was not to be, primarily as a result of the delisting decision. Why? Because my background in understanding a lot about wild forests, what kills them and the things they produce that other animals rely upon, brought me directly into the discussion of whether removing this iconic population of bears from federal safeguarding was a wise idea.


Whitebark seeds had been identified as the most important food resource for Yellowstone’s grizzly population, so, the condition of whitebark forests was central to the question of whether or not the population could be considered as truly recovered, and I was deeply involved in litigation that challenged the appropriateness of this decision.


The document that the Fish and Wildlife Service used to base their delisting decision vastly understated the extent of whitebark mortality that had occurred in the Greater Yellowstone. The impact of climate warming had altered the high elevation habitat of whitebark to the point that mountain pine beetles, previously limited by harsh conditions of the high mountains, could effectively exploit whitebark  — and they were doing so with a vengeance. In an attempt to understand more fully the level of mortality that had occurred, Wally Macfarlane, Willy Kern and myself conducted an aerial assessment of whitebark mortality for the entire Greater Yellowstone Ecosystem. 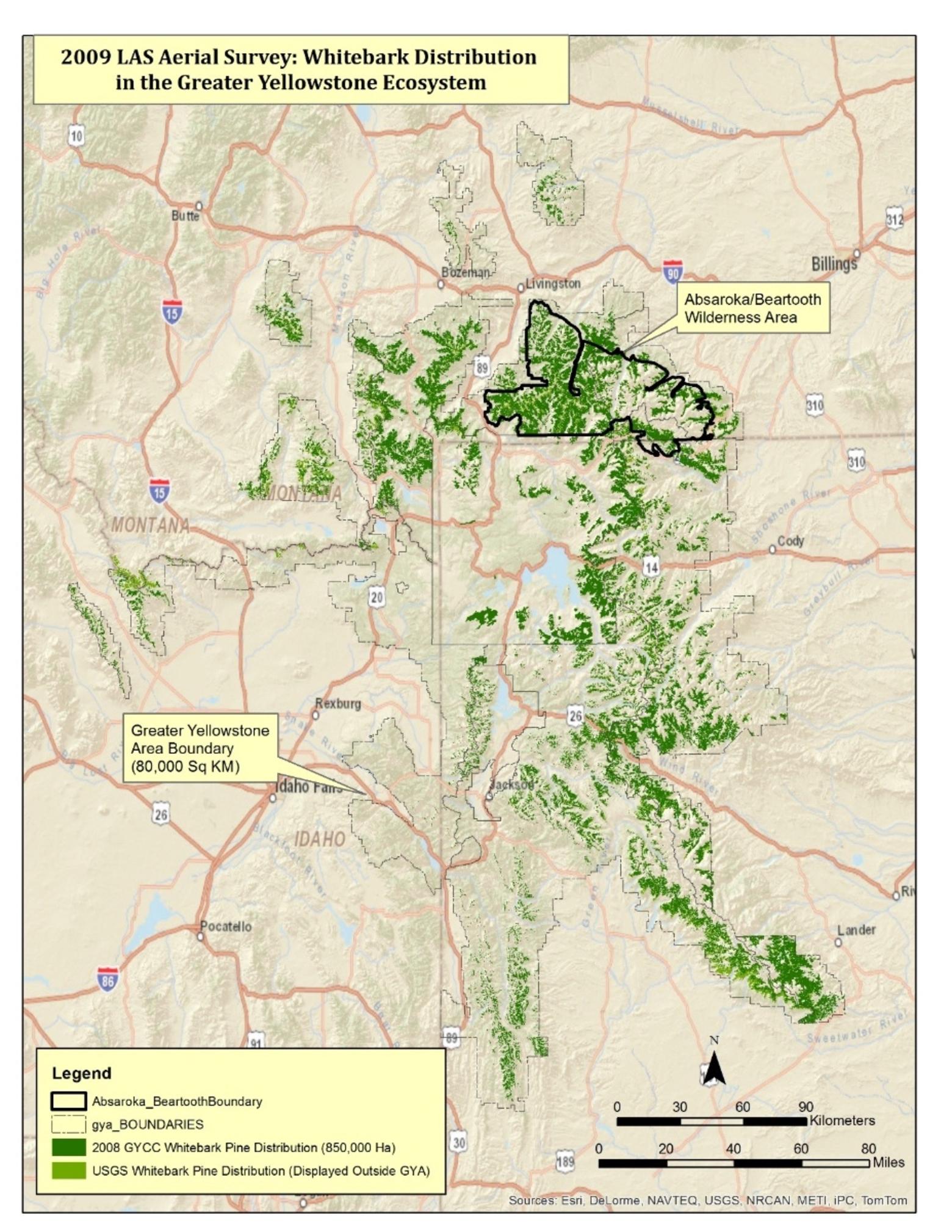 Map of whitebark pine distribution in Greater Yellowstone. After attacks by mountain beetles, blister rust, drought and wildfire, whitebark is barely hanging on, most notably in the high and cold reaches of the Absaroka-Beartooths in the northeast corner of the ecosystem and the Wind River Range in the southeast.
The 4,653 aerial photographs that resulted from this survey reinforced just how spectacular the whitebark forests of the Greater Yellowstone really are, and just how extensive the threat was to their very existence. Subsequent, independent research has corroborated our finding that the level of mortality was unprecedented in the ecological history of these forests. Perhaps even more interesting, from a scientific point of view, was documenting the dramatic extent of climax (forests in which whitebark vastly dominates any other tree species) whitebark forests in this ecosystem.


The Greater Yellowstone is the southern extent of whitebark’s distribution in the interior Rocky Mountains. Typically, as the limits of a species distribution is approached, conditions deteriorate to the point that its competitive success, and presence on the landscape, is dramatically reduced. How is it, then, that these magnificent forests have come to occupy such a vast area and play such a significant role in the ecology of this very special place?


Grizzly bears, humans and whitebark pine all colonized North American from Siberia. In fact, all three crossed the Bering Land Bridge at various times during the Pleistocene. Although it is easy to understand how highly mobile animals like grizzlies and humans were able to capitalize on ephemeral events like the opportunistic appearance of the Bering Land Bridge, it is difficult to understand how a tree might do the same. Knowing a little whitebark ecology helps explain this mystery.


Whitebark is one of a group of trees known as stone pines. Worldwide (circumpolar) there are five varieties, all originating in the Russian Far East, Siberian stone pine being the most likely origin species from which the others diverged. Plant taxonomy can be confusing, but the stone pine are defined by one unique attribute, among all the pines their cones remain forever closed unless actively opened by some external force – and therein lies one of the most fascinating stories in co-evolutionary ecology.


The closed (indehiscent) cones of whitebark contain a valuable reward for any animal willing to expend the effort required to obtain the large, highly nutritious seeds contained therein, and all of the stone pines have an associated crow-like bird that is specially adapted to harvest this valuable prize.
In the case of whitebark, the associated corvid is the Clark’s nutcracker. This amazing bird has specialized sublingual pouches that hold a dozen or more of these valuable seeds which the bird then conceals in shallow caches excavated in the soil. No less remarkable than a bird remembering the exact location of thousands of these seed caches, is the reproductive strategy of a tree that is tied almost exclusively to over-provisioning by this co-evolved bird. The tree feeds the bird, and the bird, in turn, plants new trees. 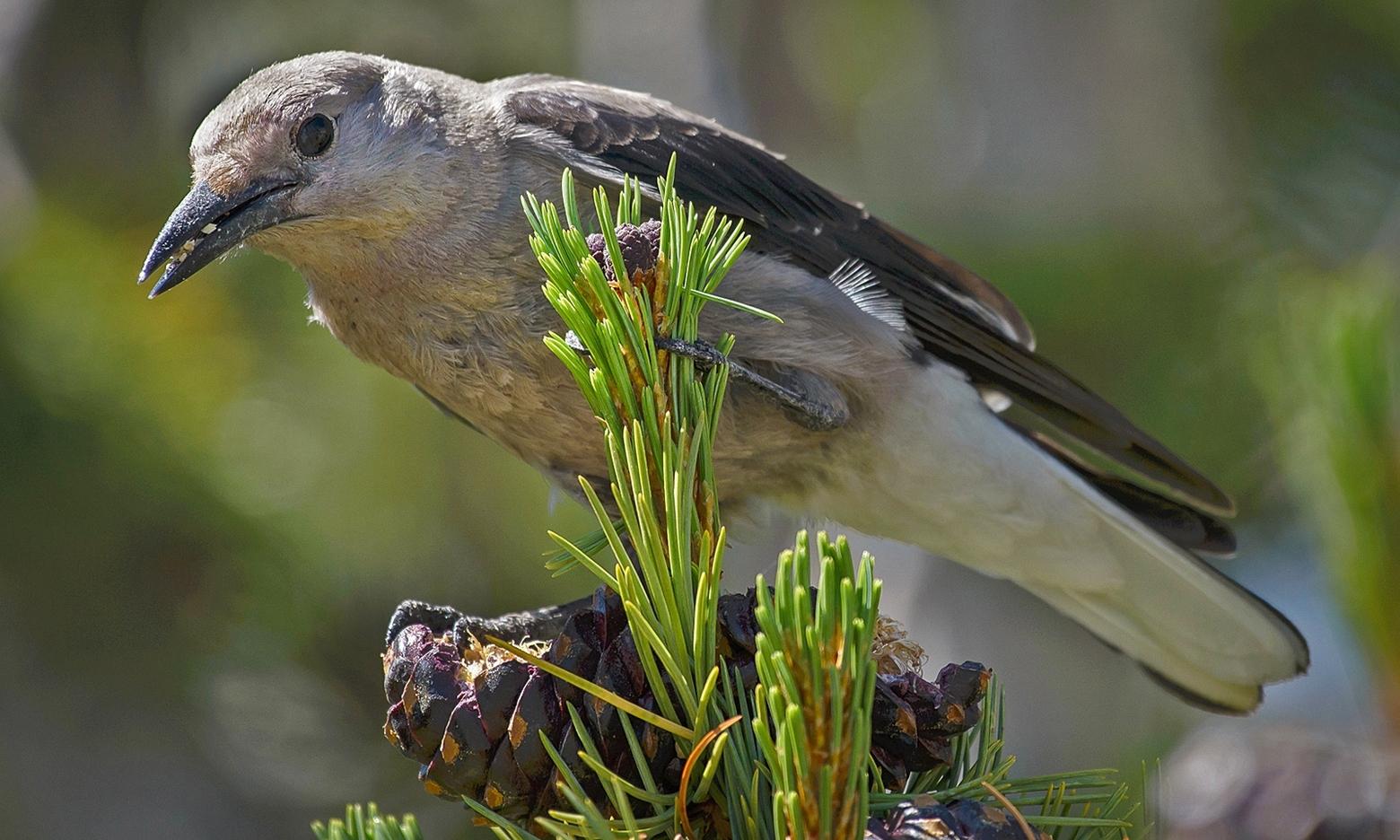 Clark’s nutcracker extracting seeds from a whitebark pine cone. Photo courtesy U.S. Forest Service
So a corvid moved whitebark seeds from Siberia to North America approximately coincident with grizzlies and humans. Both indigenous humans and grizzlies utilized large quantities of pine seeds, as do residents of Siberia to this day. However, the association between bears, humans, and stone pines goes back much further, back to time beyond memory – pine nuts litter the floor of caves that were occupied by Neanderthals.
The ancient association between humans, bears and trees has resulted in a rich indigenous tradition of creation stories and mutual respect. At least until recently, whitebark pine seeds have been identified as the most important food for Yellowstone’s grizzlies, and in fact, grizzlies in Yellowstone were more dependent on pine nuts than anywhere in the world outside of Siberia.
Imagine, as have others, what it was like for the early humans arriving on a totally wild and uninhabited continent. Theirs for the taking, except that it was already occupied by animals like Arctodus simus, the short faced bear. Beasts like the short faced bear would have been intimidating in the extreme for humans and grizzlies alike.
For whitebark, occupation of a new land also was fraught with significant challenges. Other pines were there, already well established and extensively distributed south of the Pleistocene continental ice sheets. Whitebark is supremely adapted to cold, harsh conditions, but they are not particularly effective competitors with other conifers. Many of the attributes that result in amazing survival capabilities have simultaneously resulted in reduced competitive ability.
It is the colonizing and survival capability of whitebark that have resulted in some of the most impressive of all whitebark forests paradoxically found in the southern most extent of its range. In all of the Rocky Mountains there are no whitebark south of the Wind River Range. Other five-needle pines that are distant cousins, yes, but no whitebark.
The Greater Yellowstone of 15,000 years ago was an island of ice surrounded by more moderate, intact forested ecosystems; and as the Pinedale ice receded, the emerging landscape provided a superb opportunity for an effective colonizer like whitebark.


As the ice receded, whitebark was the first tree that followed and replaced alpine tundra. As climate continued to moderate, whitebark at lower elevations was displaced by other conifers, resulting in the gradual migration of whitebark into ever higher and harsher climatic zones. In the present day Greater Yellowstone Ecosystem, whitebark occupies the most remote, the most rugged and harshest reaches of the ecosystem. 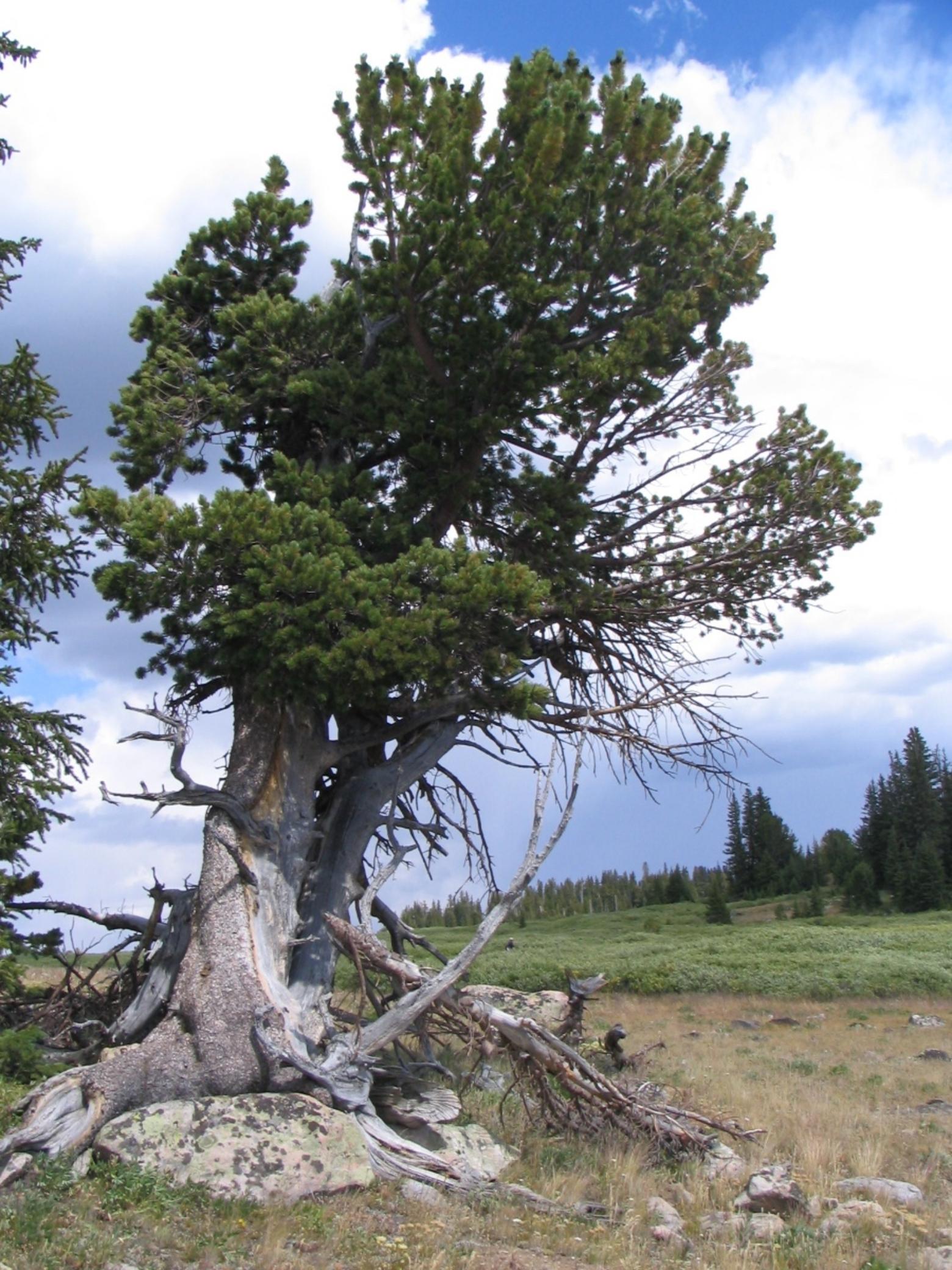 Observes Logan, "The most ancient whitebark seem to grow in the most unlikely places imaginable, like this giant growing out of solid rock. They just hang in there year after year after year, protected by their hostile environment from competition from other conifers. Note the crown has been lost and subordinate limbs are starting to dominate."
Although a variety of forest types have resulted from the dynamic geology of the Greater Yellowstone; everywhere, across this vast 22 mil. Ac. complex, above roughly 8,500 ft (2,600 m.) climax whitebark forests predominate.

Because of its inaccessible location, slow growth, and soft wood, whitebark has never been an important commercial species, and in the GYE, it has never been intensively managed.
The ecological processes that have shaped whitebark forests are largely intact since the last ice age. Hence, these expansive, climax whitebark forests remain much the same as they were in Lewis and Clark times, and in fact, long before European intrusion. It can be argued, that in aggregate, the whitebark forests of the Greater Yellowstone are among the largest expanse of old-growth forests remaining in America outside of Alaska.
So, these ancient trees and magnificent forests resulted from the intricate interplay of geology, ecology, animal behavior and intelligence – and on it goes. A species like whitebark is considered an indicator species because it integrates the entire ecosystem, and what happens to whitebark is an indication of the health and resilience of the entire community it supports.
In addition to the ecological significance of whitebark, these forests are a direct link to the very foundation of human culture, not to mention the human colonization of North America and subsequently the Greater Yellowstone. Perhaps it is this, the ecological and cultural context that is being lost with the demise of Yellowstone’s whitebark forests that breaks the heart of this “dispassionate” old scientist.


Authors Note: Much of this article was excerpted from a chapter by Jesse A. Logan and William W. Macfarlane in the forthcoming The Shining Mountains: A Journal/Atlas of the Absaroka-Beartooth Wilderness. 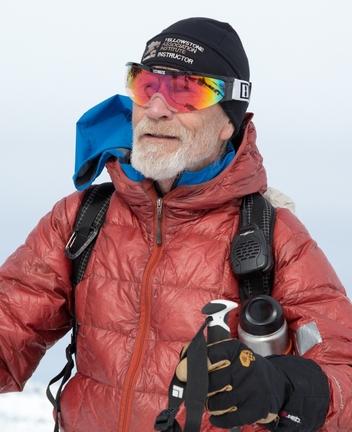 Increase our impact by sharing this story.

GET OUR FREE NEWSLETTER
Never Miss A Big Story!
Tags: Jesse Logan, From Granite to Grizzlies

Steve Primm Wades Into The Sagebrush Sea
Most people dwelling in Greater Yellowstone might live in towns and small cities but rural people and their lands hold the...
Read
Back to home