Region's amazing migration corridors and Western working lands are co-dependent. As Lesli Allison writes, 'to ensure either thrives, both must persist' 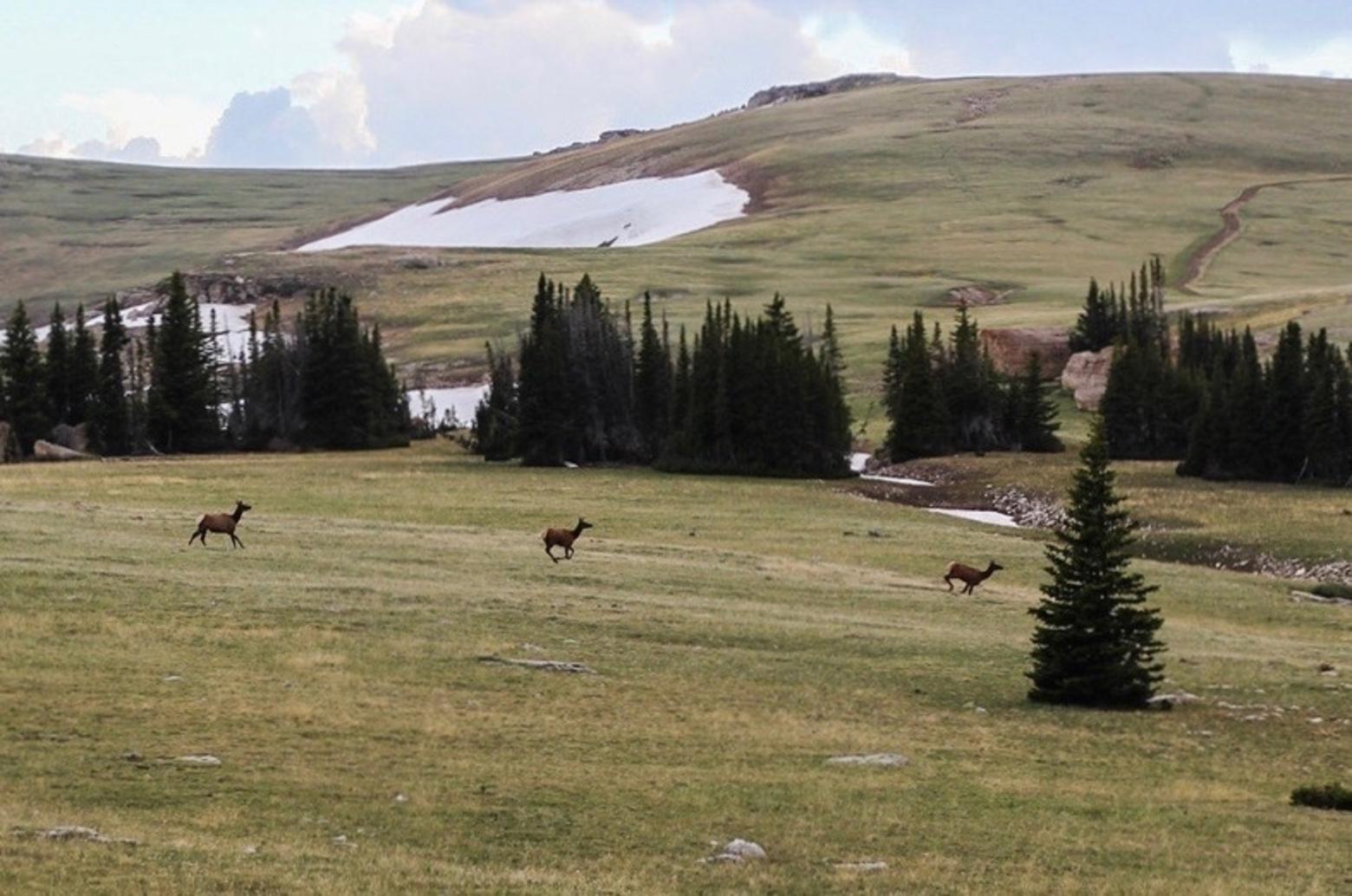 Elk migrate through Wyoming's Bighorn Mountains. While the public lands high country provides crucial range for wapiti in three seasons, lower-elevation private land functions as crucial winter range and as passageways between the mountains. The epic wildlife migrations of Greater Yellowstone, like those in the Bighorns, cannot endure without the goodwill of private landowners whose contributions need to be recognized and rewarded. Photo courtesy Gregory Nickerson/Wyoming Migration Initiative/University of Wyoming
According to public opinion polls, most Americans strongly support wildlife conservation, including the protection of wildlife corridors like those becoming world famous in the Greater Yellowstone Ecosystem.
Yet routinely, conservation efforts by environmental and sportsmen’s groups are met with resistance by many rural stakeholders, often including landowners and local governments. A closer look at the current efforts to conserve wildlife corridors can provide helpful insights as to why this happens and how we can find more productive paths forward.
New science and technology are shedding light on wildlife migrations. Researchers are documenting long elk, mule deer and pronghorn corridors and capturing these extraordinary journeys on film. The public can see for the first time the challenges these animals face in navigating obstacles such as highways, fences, subdivisions and rivers. Research is also revealing the importance of migration to sustaining the wellbeing and genetic diversity of these wildlife populations.
In response, a suite of efforts is unfolding to conserve wildlife corridors and remove barriers. By designating corridors and assigning special protections to them, conservationists hope to keep these corridors intact and ensure wildlife can move freely. 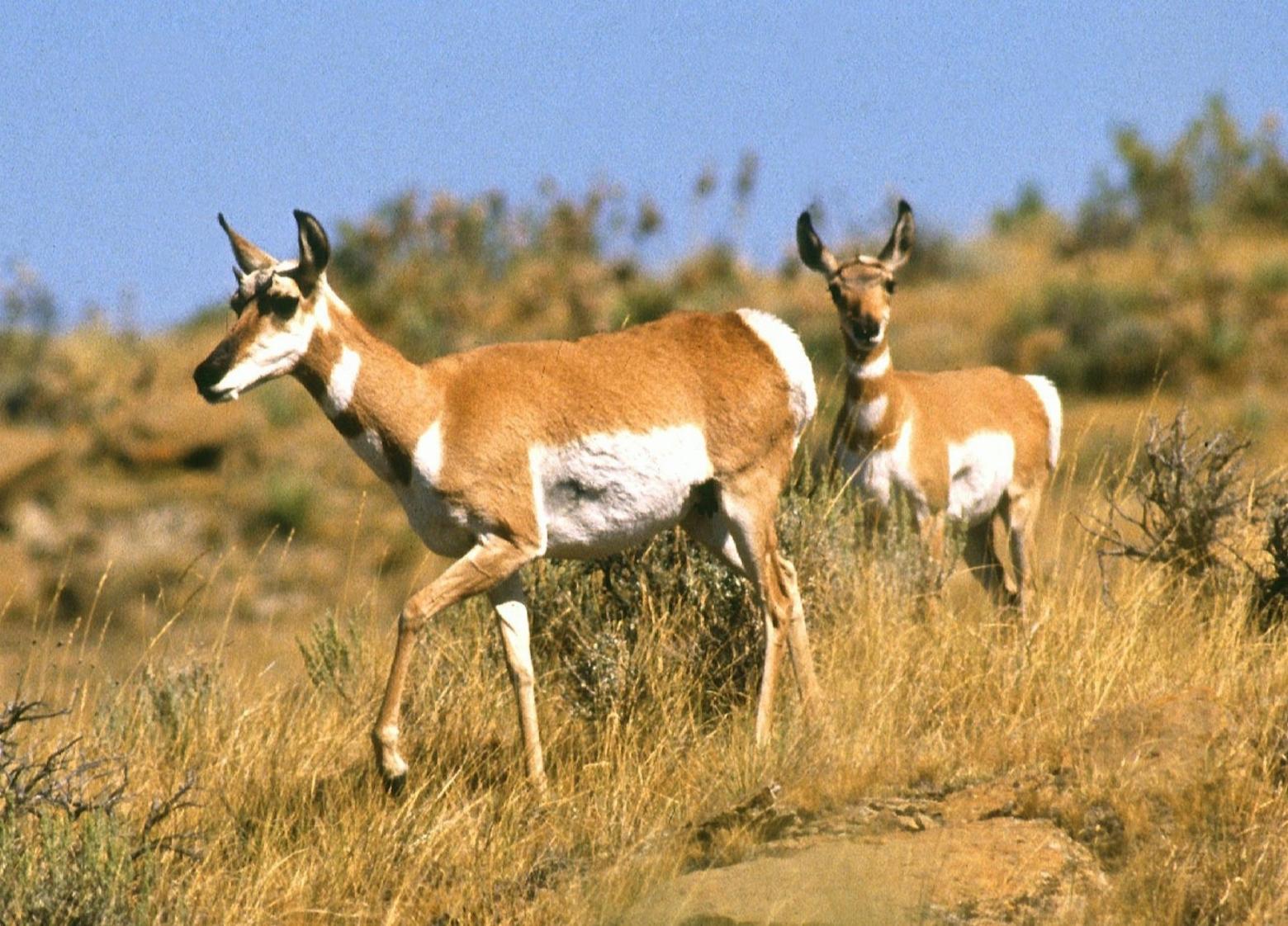 Pronghorn migrate long distances across both public and private land, with the "Path of the Pronghorn" stretching between Grand Teton National Park and Wyoming's Red Desert being a heralded and fragile route. For pronghorn populations across the West, open working ranch lands, free of development, are crucial to the ecological function of the passageways. Photo courtesy Jack Dykinga/USDA Agricultural Research Service
Unfortunately, these conservation strategies are sometimes designed without the input of local people—particularly landowners—who are both the most knowledgeable and most impacted. When this happens, conservation strategies can unnecessarily pit wildlife against the needs and interests of working lands and the rural communities they sustain.
The truth is, conserving wildlife and sustaining the economic viability of working lands are both essential. Done right, these things can and should go well together.
There is a reason that wildlife are drawn to certain places on the landscape. It’s because those places meet their needs. If you want to find abundant wildlife, look on a well-managed ranch. If you want to conserve wildlife and wildlife corridors, conserve the ranch. This doesn’t just mean putting conservation easements in place. It means keeping working land ranching operations economically viable, so that the land can be well managed, so the kids can come back home, so that rural communities can thrive and in turn sustain the working lands.
What we need to recognize is that both wildlife and people depend on public and private working lands for survival. Landowners have to be engaged as primary partners early in this effort, not left out of the conversation as is so often the case.

"Just as working lands sustain wildlife, so should wildlife be helpful in sustaining working lands. Wildlife are an important economic driver in western states, yet in many places, the working lands that sustain the wildlife see the least economic benefit and often experience the greatest impacts." —Lesli Allison

Just as working lands sustain wildlife, so should wildlife be helpful in sustaining working lands. Wildlife are an important economic driver in western states, yet in many places, the working lands that sustain the wildlife see the least economic benefit and often experience the greatest impacts. Forage competition, fence damages, disease transmission, depredation, hunting pressure and more can impact the bottom line in a business where profit margins are already low and getting worse. This lopsided relationship is unsustainable and damaging to all interests.
If we want to change the dynamic, we need to flip the whole approach upside down. Instead of looking first for threats, start by looking at what is working. Why are wildlife using that piece of land? What is going right there? Then figure out how to support what is working.
Currently, when a wildlife corridor is designated, it is often received as bad news by affected landowners because they fear restrictions, regulations, increased public scrutiny and potentially litigation.
Instead, we need to recognize the benefits of working lands, treat landowners as valued partners and  find ways to support rather than penalize landowners for providing that habitat. This can mean a whole suite of things—from simple recognition and appreciation to management flexibility, regulatory assurances, risk mitigation, economic benefits and a greater voice in wildlife management decisions.

"The agricultural community has much to gain by taking pride in our stewardship and pro-actively identifying and championing win-win strategies rather than seeming to oppose wildlife at every turn. It’s not enough to say we are the original conservationists. We need to demonstrate active leadership in sustaining the entire living community of the land within our care."  —Allison

At the same time, the agricultural community has much to gain by taking pride in our stewardship and pro-actively identifying and championing win-win strategies rather than seeming to oppose wildlife at every turn. It’s not enough to say we are the original conservationists. We need to demonstrate active leadership in sustaining the entire living community of the land within our care.
It’s time to quit the old dynamic and figure this out because under the status quo we’re losing all of it—working lands, wildlife and the West we love.
EDITOR'S NOTE: Lesli Allison is executive director of the Western Landowners Alliance. For more information, read her bio below. 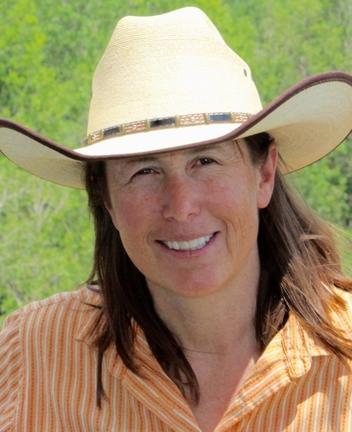 Lesli Allison is the executive director of the Western Landowners Alliance (WLA), a landowner-led network dedicated to the health and prosperity of the American West by working to advance policies and practices that sustain working lands, connected landscapes and native species. WLA members steward approximately 14 million acres of deeded and leased public land in the American West. Through policy reform and on-the-ground stewardship, they are working to protect land and wildlife, restore watershed health, maintain wildlife corridors, promote economically vibrant rural communities, and to keep working lands viable.