When it comes to assessing biological recovery of grizzlies, who is better informed—people who study wildlife for a living or governors and legislators who dislike grizzlies and wolves? 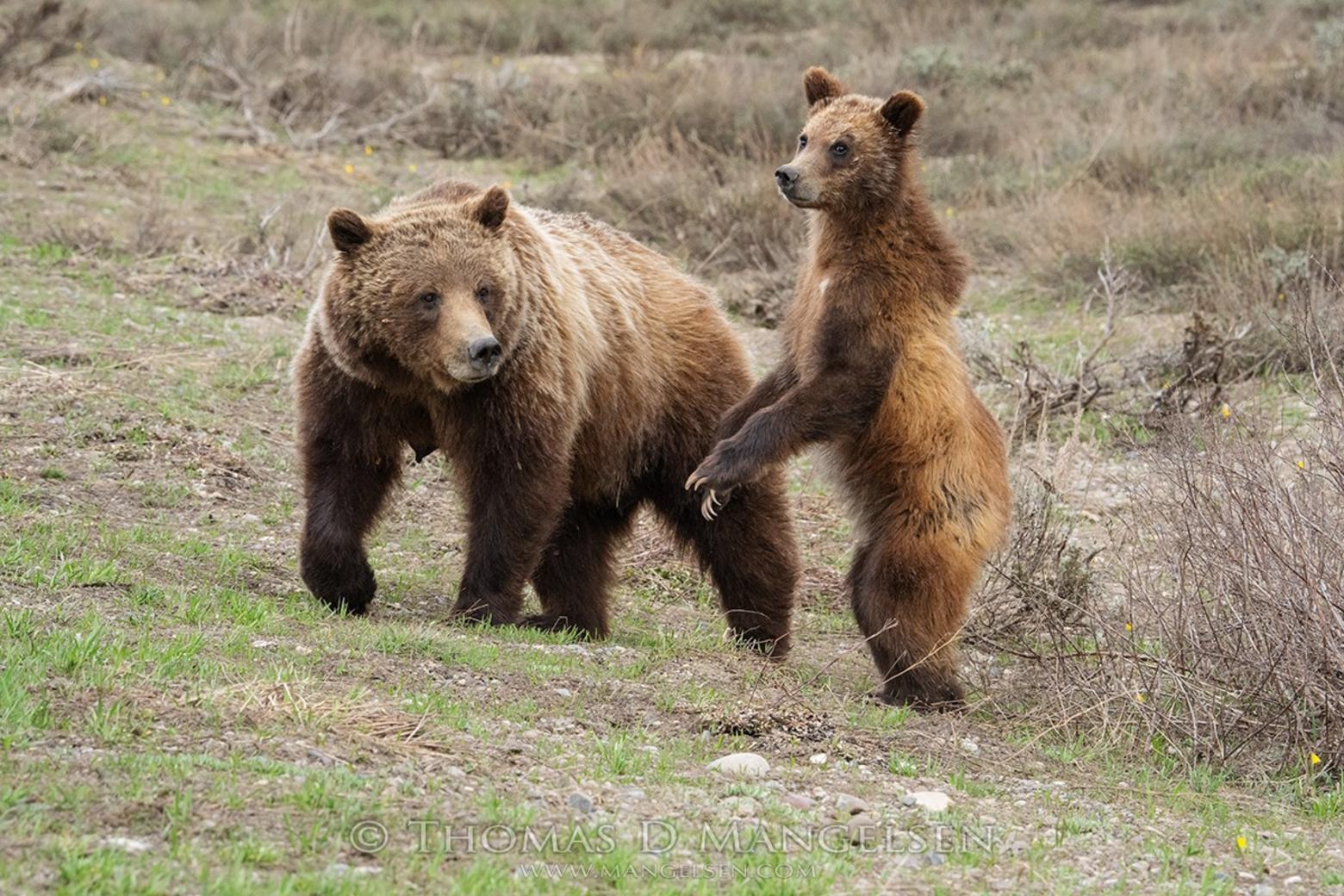 Grizzly 399 and one of her recent cubs. Scientists say that recent legislation passed in Montana could easily result in biological recovery of grizzly bears in the Northern Rockies being set back, with regulations mirroring those applying to wolves, that would result in more bears being hunted and destroyed. Photo courtesy Thomas D. Mangelsen. To see more of Mangelsen's photographs, go to mangelsen.com
EDITOR'S NOTE: The governors of Montana (Greg Gianforte), Wyoming (Mark Gordon) and Idaho (Brad Little) recently announced they are seeking to have grizzly bears removed from federal protection under the Endangered Species Act in their states, in part so that bears can again be sport hunted. The following op-ed was written by three dozen scientists with combined centuries of professional experience managing grizzlies, wolves and other public wildlife in Montana alone. Among them is Dr. Christopher Servheen who for 35 years led grizzly bear recovery for the US Fish and Wildlife Service and for years supported removing grizzlies from federal protection. Joining him are several individuals considered the premier field biologists in the state who have managed grizzly bear conflicts.  Recent legislation passed by lawmakers in Montana pertaining to grizzlies and wolves and signed into law by Gov. Greg Gianforte have caused Servheen, who is now retired from government service, to change his position. While this statement below pertains mostly to Montana, many of the same concerns exist in Wyoming and Idaho.  The full list of signees to this essay can be found at the bottom of the piece. In addition to the scientists, several dozen indigenous tribes have signed a letter opposing delisting.  If readers disagree, we welcome to hear from you. However, in order to print your response, we insist that you provide scientific evidence to support your rebuttal.
Statement of Opposition to Removing Grizzlies From Federal Protection
We are 35 state, federal, and tribal wildlife professionals who have worked together for more than 40 years to help recover and manage grizzly bears, wolves, and other wildlife in Montana.
We did this by building science and fact-based management policies and plans withpublic input while carefully balancing the needs of bears and other wildlife with the needs of the people who live, work, and recreate in Montana.
We believed in and promoted the eventual delisting of recovered grizzlies and wolves and turning them over to state management. We believed that the wildlife professionals in Montana Fish, Wildlife, and Parks (FWP) would be good stewards who would continue to carefully manage grizzly bears and wolves using science and facts after recovery and delisting.
All this changed in 2021 when a new legislative majority and a like- minded governor took office. Science-based wildlife management in Montana was replaced by anti-predator hysteria fueled by misinformation and emotion. Professional wildlife management by FWP biologists was replaced by partisan political intervention that overturned decades of sound wildlife policy.
Examples of legislation/regulations passed in 2021 that sabotages sound wildlife management:
•  A law (SB 98) that says a person can shoot a grizzly bear if it is “threatening to kill a person or livestock.” “Threatening” is not defined. This will result in the unregulated killing of grizzlies anywhere by anyone.
•  A law (SB 337) that says that FWP cannot relocate any grizzly bear
captured in any type of conflict outside a recovery zone.
•  A law (HB 224) mandating allowing the use of neck snares to kill wolves that will result in grizzly bear deaths and the deaths of countless numbers of other non-target animals.
•  A law (HB 468) allowing the use of hounds to hunt black bears (which had been outlawed in Montana for 100 years). The use of hounds to hunt black bears will resultin conflicts and death for grizzly bears in the areas where hounds are used.
•  A law (SB 314) allowing the use of bait around wolf traps and neck snares. Bait will also attract grizzly bears and other forest carnivores to these sites where they will be trapped, or neck snared and be killed or maimed.
•  Montana Code (MCA 87-2-519) allowing out of state landowners who own more than 640 acres and their “guests” to hunt both black bears and mountain lions with hounds on their property and on public lands surrounding their property for 2 miles in any direction, and to do so without buying a non-resident hound hunting license. The use of hounds to hunt black bears will result in conflicts and death for grizzly bears in theareas where hounds are used.
•  A law (HB 225) extending the wolf trapping and neck snaring season into the time that both grizzly and black bears are out of their dens, which will result in bears beingcaught, maimed, or killed in wolf traps and neck snares.
•  A law (SB 314) allowing hunting wolves over bait, even at night with spotlights and night vision scopes.
•  A law (SB 267) that pays people to try to trap and kill wolves. This law takes wolfmanagement back into the anti-predator bounty days of the 1800s.
In addition to meeting population objectives established in the Recovery Plan, a mandatory requirement of the Endangered Species Act (ESA) for a species to be delisted is that the state have adequate regulatory mechanisms in place to assure that grizzlies (and wolves) in Montana remain healthy and recovered after delisting. Healthy and recovered grizzly (and wolf) populations are populations that are carefully managed and distributed across their suitable available habitat. Delisting does not mean that legislatures can drive grizzly and wolf populations down to minimum numbers.

"It doesn’t take a lot of imagination to realize that if grizzly bears were delisted and turned over to state management, that the Montana legislature and governor would do the same thing to grizzlies that they are currently doing to wolves—they would likely try to legislatively minimize grizzly numbers inside recovery zones and eliminate mostgrizzlies outside recovery zones."