Despite claims by the Trump Administration and some politicians that the public desperately wanted the ESA reformed, that isn't what citizens say in surveys 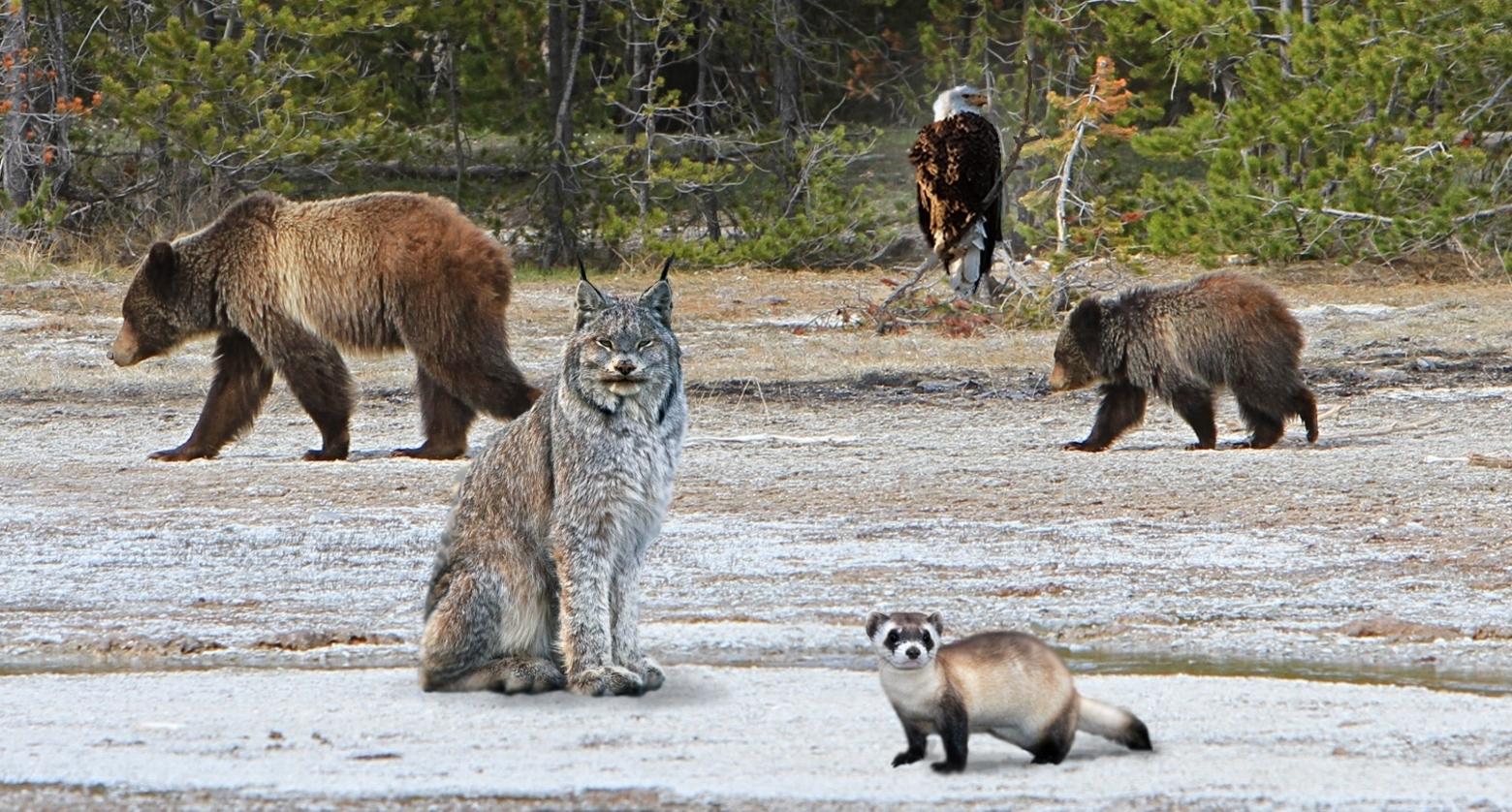 Composite photo by MoJo staff
The Endangered Species Act, or “the Act" as we'll refer to it here, is arguably the most important law in the United States for conserving biodiversity and arresting the extinction of species.
Congress passed the ESA in 1973 with strong bipartisan support (the House voted 355-4 in favor of the law) at the behest of a Republican president, Richard Nixon. Nixon had come to believe existing protections for threatened and endangered species were insufficient.
Since its passage, the Act has helped reverse and stop declines in numerous species—from bald eagles to Lake Erie watersnakes—and served as a model for similar laws around the world.
Nevertheless, criticism of the law has been a persistent feature of debates about whether and how to protect imperiled species. That criticism often comes from business and agricultural interests, who argue that the Act’s provisions excessively limit their ability to develop and manage private property.
Such criticisms led to the Trump Administration's recent decision to curtail the scope of the Act, citing the need to better respect private property rights, and some in Congress have claimed that support for the law was waning.
We are ecologists and social scientists whose work often intersects with the Endangered Species Act. We wanted to know: Is public support for the Act declining? And if so, why?
Some members of Congress earlier proposed legislation to weaken the Act’s protections and recently Interior Secretary David Bernhardt and Commerce Secretary Wilbur Ross implemented many of the changes without Congressional action, despite widespread condemnation from conservation organizations.
The Center for Biological Diversity, an advocacy group that supports protections for endangered species, analyzed congressional voting records and found that from the 1990s until 2010, a typical year saw roughly five proposals to amend the Act or otherwise curtail some of its protections.
Then, in 2011 the number of proposed bills to amend the Act jumped to 30 and has continued to increase. In the past two years there have been nearly 150 such efforts aimed at weakening the Act. Sponsors of such legislation have not been shy about the goals of their efforts. As Rep. Rob Bishop, R-Utah, former chairman of the House Natural Resources Committee, put it, their intent is to “invalidate” the Act. 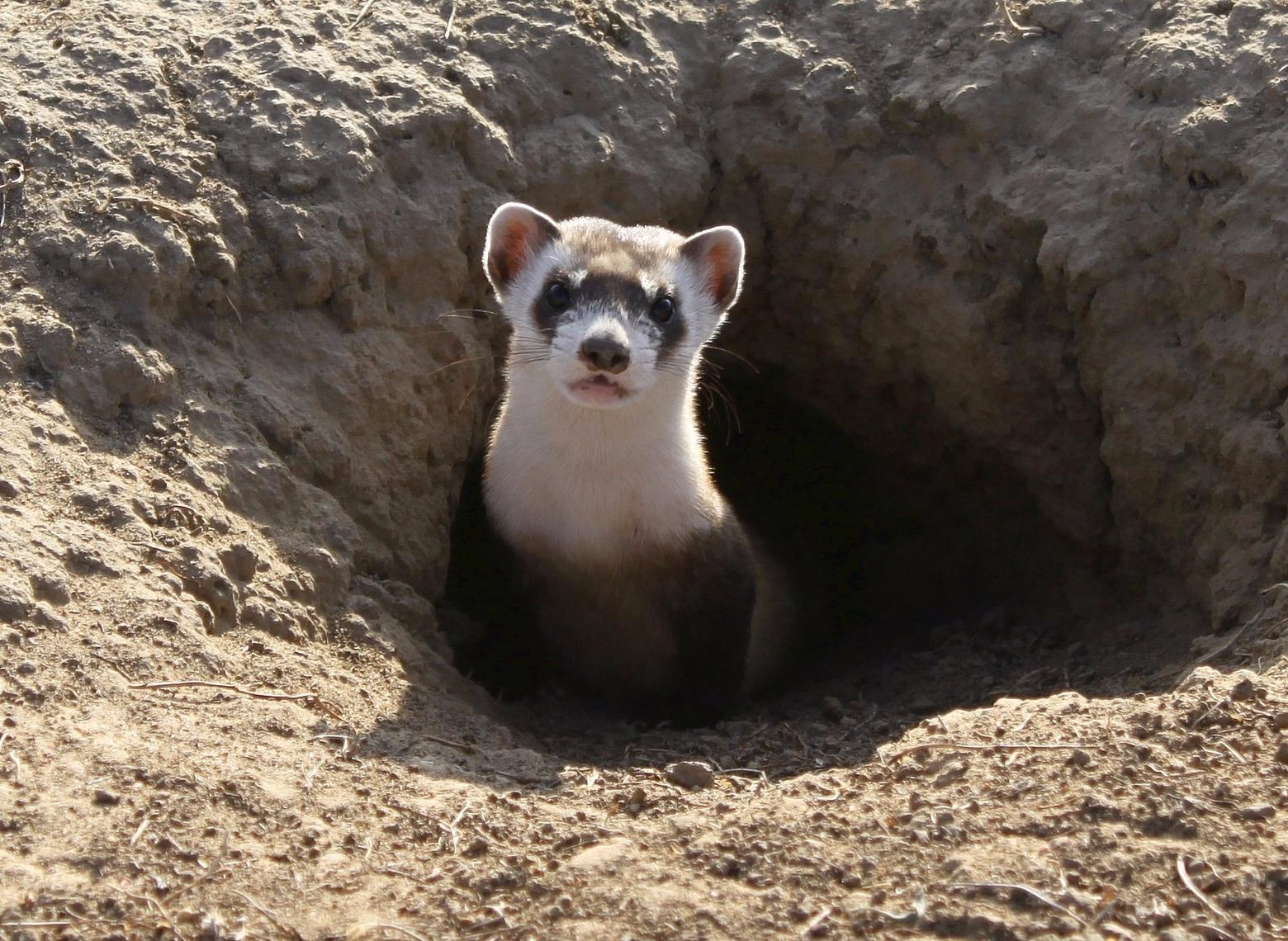 The black-footed ferret is the most critically-endangered land mammal in North America. Once thought extinct, a tiny population was discovered decades ago on a ranch near Meteetse, Wyoming and the animals were brought into captivity. Thanks to the Endangered Species Act, black-footed ferrets are getting a second chance in the wild. They depend on prairie dogs to survive but prairie dogs remain targets of annihilation in the West. Photo courtesy Ryan Moehring/US Fish and Wildlife Service
But threats to the Act are not limited to congressional actions. The Act, even prior to revisions implemented by Bernhardt and Ross, had been weakened by rule changes (which prescribe how to carry out the Act) that were adopted by the agencies charged with administering it. Those agencies are National Marine Fisheries Service and U.S. Fish and Wildlife Service.
One change adopted in 2016 effectively redefined endangerment in a way that could dramatically lower the standard for what measures are required to recover endangered species.
Some say these changes were needed to prevent widespread public backlash against the Act, which could lead to its complete unraveling.
For example, in 2015 the Obama Administration proposed revising policy concerning the listing of endangered species. The proposal effectively made it harder for citizens to petition to list a species (only listed species are entitled to ESA protections). High Country News characterized the proposal as a “preemptive strike” that was “aimed at warding off a GOP overhaul of the law.”
Similarly, some conservation professionals worry that continuing protections for controversial species such as gray wolves could “create resentments toward the species and the ESA” ultimately, undermining the effectiveness of the law.
But do those arguments hold up? In 2014, we conducted a survey of 1,287 Americans, gathering data on a variety of topics related to wildlife conservation, including support for the Act. We also gathered data from previously published studies and public polls. We found four studies or polls that assess support for the ESA spanning roughly two decades, and combined them to assess public attitudes about the Act over time.
Collectively, results indicate support for the Act has been remarkably stable over the past 20 years.
Average support in the three most recent studies, conducted in 2011, 2014 and 2015, was statistically indistinguishable from the earliest study, conducted in 1996. The data show that more than 4 in 5 Americans support the Act, while roughly 1 in 10 oppose it.
In contrast to the often-repeated statement that the Act is controversial, these data suggest that support for the law among the general population is robust and has remained so for at least two decades.
Furthermore, while some issues—for example, gun control and climate change—have become increasingly partisan, our data indicate that both self-identified conservatives as well as liberals strongly supported the ESA. Though "liberals" (90 percent) were more supportive of the Act than "conservatives" (74 percent), we found nearly 3 in 4 conservatives supported the Act, and only 15 percent opposed the law.
These results are mirrored in polls conducted in 2011 by Harris Interactive and in 2015 by Tulchin Research. Those polls found that 73 percent of Republicans and 82 percent of self-identified conservatives supported the Act, respectively. Those same polls found that 93 percent of Democrats and 96 percent of liberals supported the Act.
Agricultural and property rights advocates have long criticized the ESA, but our results show support for the ESA transcended interest groups, including agriculture (71 percent) and property rights (69 percent). This result may be explained, in part, by research showing that interest group leaders sometimes hold more extreme views than their members.

So, who influences policy?
Some conservation professionals believe that continued protections for controversial species such as gray wolves could erode support for the Act and the species the law protects.
If that were so, one might anticipate less support for the Act in places where such species were listed over long periods.
However, our results show that support for the Act, trust in the U.S. Fish & Wildlife Service that administers the Act and attitudes toward wolves are equivalent in places where wolves are protected by the Act and places where wolves don’t live, and hence, are not protected.
Our results raise the question: If support for the Act transcends political ideology, party, region of the country, and even interest group—why are congressional efforts to weaken the Act increasing?
Some insight may come from political scientists who have shown that “average citizens and mass-based interest groups” have little to no influence on a wide range of policy issues. Rather, the research suggests, policy outcomes in America are heavily influenced by “economic elites” and business interests who, by virtue of their considerable financial resources, have greater clout with, and access to, policymakers.

Some insight may come from political scientists who have shown that “average citizens and mass-based interest groups” have little to no influence on a wide range of policy issues. Rather, the research suggests, policy outcomes in America are heavily influenced by “economic elites” and business interests who, by virtue of their considerable financial resources, have greater clout with, and access to, policymakers.

This could also explain why “legislators in the U.S. Congress routinely defect from their campaign promises in environmental protection, undermining the link between citizen preferences and policy choice.”
According to records compiled by the Center for Biological Diversity, as of April 2018, there are more than 50 bills that would, if passed into law, weaken the Act in one form or another. Whether such legislation can be passed in the face of overwhelming public support and a House of Representatives now controlled by Democrats remains to be seen.
EDITOR'S NOTE: The study, published in the journal Conservation Letters, can be found here.  Below is a commentary about the Endangered Species Act from Joel Sartore, award-winning wildlife photographer who works for the National Geographic Society and whose Photo Ark project is devoted to chronicle every critically imperiled animal on Earth before it goes extinct.
About Jeremy T. Bruskotter, John A. Vucetich, Kristina M. Slagle, Ramiro Berardo, Ajay S. Singh and Robyn S. Wilson