Dancing With The Mariposa Lilies of Renewal 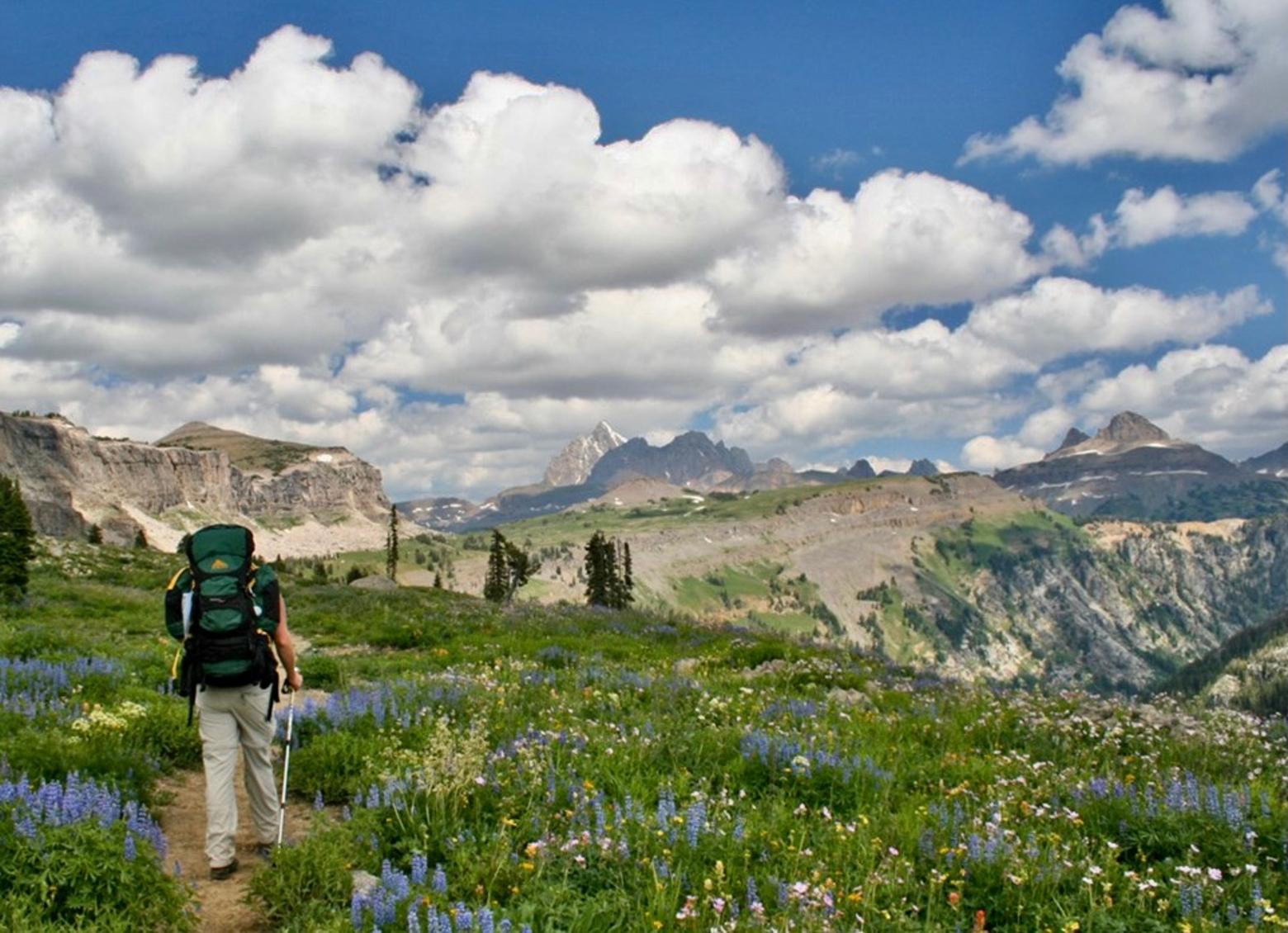 A lone hiker moves through wildflower-coated meadows on the Death Canyon Shelf Trail in Grand Teton Park. Photo courtesy Rademak/Grand Teton/NPS
by Susan Marsh
From January, moving into the stretch of February, the middle of winter in the Northern Rockies. Imagine a dormant plant, say a white mariposa lily (Calochortus eurycarpus), at leisure in its bed of frozen clay soil as snow lies deep on the mountainsides, its home. In time, the bulb will send up a tender shoot from the same source as last year’s.
To the casual hiker the new one emerging in a few months will look about the same—showy white petals whose smudges of deep magenta lead pollinating insects to a bowl of plenty.

An individual flower in a sea of white may be indistinguishable to the hiker’s eye, but the plant knows the bloom will be unique. It has done this before.

The previous year’s shoot grew nearly twenty inches tall, unfurled its narrow leaves (Calochortus meaning ‘beautiful grass’), bloomed, set seed, withered and dried. Unlike its cousin the sego lily, whose dried stalks remain stiff and erect, mariposa seed capsules and stems are fragile and easily crushed by wind or snow. The plant appears to be gone—like the year itself.
The bulb now rests in its reservoir of energy gathered from the sun, air, water and soil. It doesn’t know what will become of the small pale shoot forming deep inside as winter begins to wane. Perhaps it will develop two, even three, ballooning blooms. Perhaps a deer will nibble the young greens to the ground before it has a chance to bud. But the lily will start again, for the reservoir is deep. 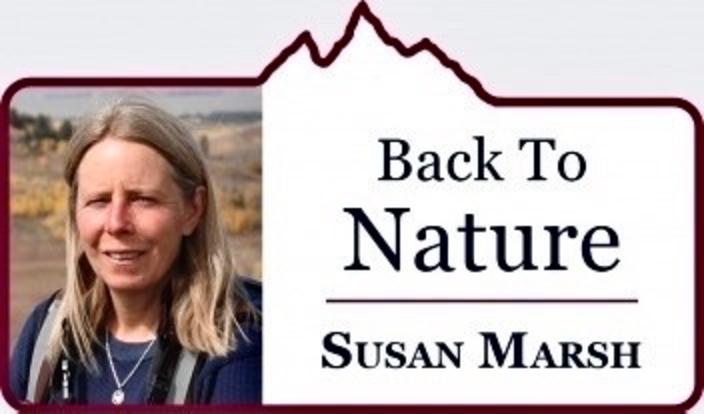 Like the mariposa lily, which by mid-July will brighten certain wildflower parks as the brilliant yellow mule’s ear starts to fade, I tap into my reservoir at this time of year. I need to fill the well before the hours of daylight lengthen, drawing me outdoors and away from contemplation, reading, thinking, and writing. Soon enough I will hike along remnant cornices and chase the last of the snow with a rake as it melts back to the edges of my garden.
Most years I make a couple of New Year’s aspirations (no too-easily-broken resolutions for me). Recently I read an article about picking a “word for the year” – a touchstone meant to remind us of how we intend to conduct our lives for the coming months. After a few trial efforts and rejections I decided that my word for 2022 is learn.
There is no lack of emerging information about wildland plants that I could peruse. Each puzzle piece brings a deeper appreciation for how remarkable common wildflowers truly are. But I’ve been paying attention to them for decades, so what I mean by learn is "learn something new."  A language whose rudiments elude me, a different approach to art, some way to cultivate relationships with people.
Why this last one? Because making friends becomes more difficult with age, and as long-time pals depart it’s easy to become isolated. And while our culture has lately become aware of the need to include the non-human world in our code of ethics and community, I have had the opposite problem: places, plants and wildlife have been my first and loyal loves, as people tend to be less dependable than nature.

Making friends becomes more difficult with age, and as long-time pals depart it’s easy to become isolated. And while our culture has lately become aware of the need to include the non-human world in our code of ethics and community, I have had the opposite problem: places, plants and wildlife have been my first and loyal loves, as people tend to be less dependable than nature.

So this year my intention is to expand my circle of human friends. I never felt the need for this until my husband died and I started living alone.
It isn’t strange to seek renewal into the membership of human society in 2022. Many of us have existed in a state of communal limbo during the past two years. Forced isolation, along with my role as caregiver to my dying husband, kept me apart. I had to decline offers and invitations so many times that people stopped asking.
At first, Covid restrictions weren’t enormously burdensome since my social life consists of outdoor adventures, and we could still get out for skiing and hikes. But there was something special about the few occasions when I poured tea or beers for others on my back deck. It reminded me of how good it is to simply visit, share stories and laughs, and to enjoy the intimate presence of my kind.
A new discovery: however unreliable we humans can be, we need each other. A solo wilderness trip is balm for the world-weary soul, but so is sharing it with another. I once led outings for various non-profit groups, a practice that ground to a halt with Covid. We couldn’t carpool, and no one was ready to stand in a tight cluster, even outdoors, to hear a mini-lecture on the synecology of wildflowers and their attendant pollinators, fungi, and other organisms. I miss sharing such information and beauty. 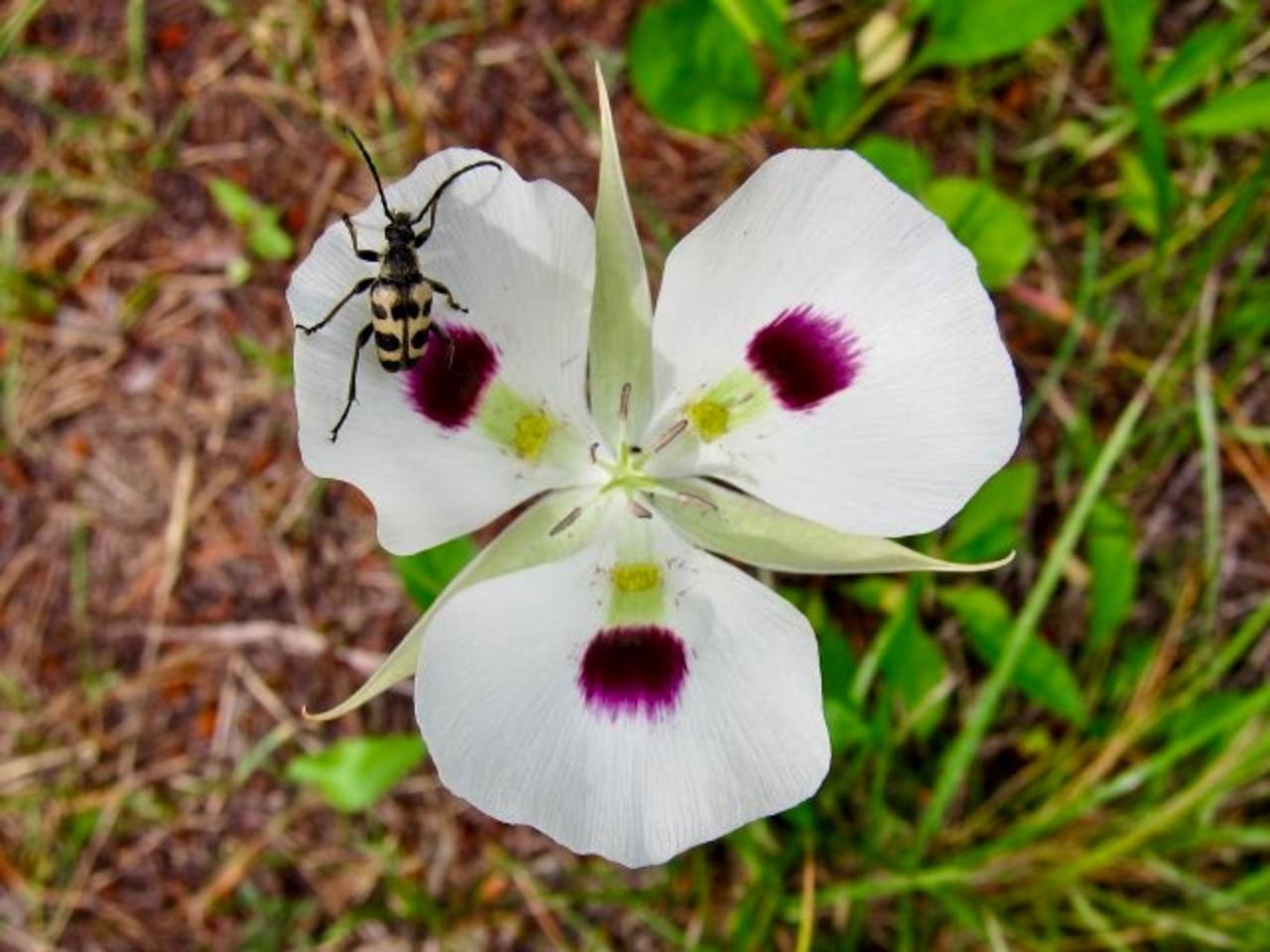 Calochortus eurycarpus, the native mariposa lily. Photo courtesy Miquel Veiera, Wikimedia Commons (BY 2.0)
But perhaps the mariposa lily can serve as my guide. It is steadfast in pursuit of its purpose, to grow and reproduce, while offering pollen and nectar to insects, stems to nibbling browsers, and beauty to passing hikers. No matter the challenges, it seems to find a way.
We all have our singular forms of beauty to share, though they can be shy at times, these times in particular. By now we’re tired of looking in the mirror (and at Zoom, though I must admit it’s better than not seeing other people at all). A measure of my Covid-fatigue might be that touch of grumpiness that seems to pervade life in general, including the idea that I might possess some form of inner beauty. Humbug, I say.
This is particularly true after a night with too little sleep followed by a sequence of infuriating attempts to negotiate websites that tell me I have misspelled my name or forgotten my password or neglected to check the right box, while my elderly cat tries to climb into my lap with his needle-sharp claws.
After an hour or so of this, what follows is best described as meltdown. Tears of frustration finally give way to those of unresolved grief. It saddens me that I must be provoked into a near-tantrum before I will allow myself to cry.
Another news flash: other people make me a better person. I’m more even-tempered in their company, not that I put on a show of good humor simply for their benefit. I find myself reacting spontaneously to companionship—laughing easily, making small jokes, pointing out the shape of a particularly interesting cloud. I don’t do these things when I’m alone.
There is a continuum of ways to relate to the world, from the most superficial (I think of the Teton skyline or Old Faithful as mere backdrops for selfies) to a deep knowledge and participation in the numinous aspects of creation.
Most of the time I live between these endpoints, appreciative of what surrounds me but also distracted by the impulse to take a photograph or look up the botanical name of the subspecies in front of me—a  desire to know about rather than to participate as part of.
True participation eliminates the petty concerns of my ego-self (as the Alcoholics Anonymous wags have it, “the itty-bitty shitty committee” in our heads). It takes away loneliness as one joins in the magnificent community of life. Alan Watts captured it well when he wrote, “To know reality you cannot stand outside it and define it; you must enter into it, be it, and feel it.”*

True participation eliminates the petty concerns of my ego-self. It takes away loneliness as one joins in the magnificent community of life. Alan Watts captured it well when he wrote, “To know reality you cannot stand outside it and define it; you must enter into it, be it, and feel it.”

Yes, yes, I say, but how? An entry point can be as elusive as the correct-damned-password, in front our faces at times and out of reach at others. I suspect it is rather like chasing any kind of faith or religious experience. Running after it is futile; you must wait for it to arrive. Prepare, be watchful and open.
Spring equinox is weeks away but there is a sense of anticipation as the calendar turns. The quality of light begins to change from the eighteen hours of darkness and deep blue shadows of December. I begin to feel rejuvenated, in spite of the midwinter-and-Covid slump, even when I spend much of my day indoors. I set aside the production of art and writing for an hour or two of simple noticing. How do I feel, physically, emotionally? What is happening out the window or along the trail?  How am I part of it all? What can I contribute?
A January thaw brings 40 degrees, bare decks, and a dearth of birds at the feeder. They don’t need peanut butter when tree-dwelling insects stir. By mid-month I have already heard the spring song of chickadees. Ravens cavort in pairs. The trees shed their clods of consolidated snow and a breeze out of the south combs their branches, gently shaking them awake.
That unseasonably warm air does the same for me. Wallowing in knee-deep snow with a roof rake, I release thick slabs from the greenhouse, all the while bending to the strong steady hand of the wind as it pushes against my shoulders. Knowing the thermometer will read below zero in a day or two makes the brief respite all the more soothing. When I finish with the outdoor chores I will call a friend I haven’t talked to in a while. Perhaps she’ll want to ski, or have some tea.
Watchfully, I follow the year’s renewal and experience my own. I don’t know what form it will take or what will happen to it as it unfolds over the coming weeks or months, but I will not neglect a chance to hike along the southern flank of Elk Ridge in six months’ time to see how the mariposa lilies have fared.
On that day I will pause along the trail and execute a little dance to celebrate the wildflowers. As Alan Watts reminds us, “when you are dancing you are not intent on getting somewhere…The meaning and purpose of dancing is the dance.”*
*From Alan Watts' Wisdom of Insecurity, 1951
NOTE: Are you a fan of award-winning writer Susan Marsh's essays? If yes, sign up by clicking here for Mountain Journal's free newsletter and make sure you never miss her latest column, "Back to Nature."