Where Grizzlies Still Barely Hang On—In Their Own Yaak Time

For writer Rick Bass, dignity can be measured where nature is allowed to persist without impetuous interference. Another installment in our Sounds Of Silence series. 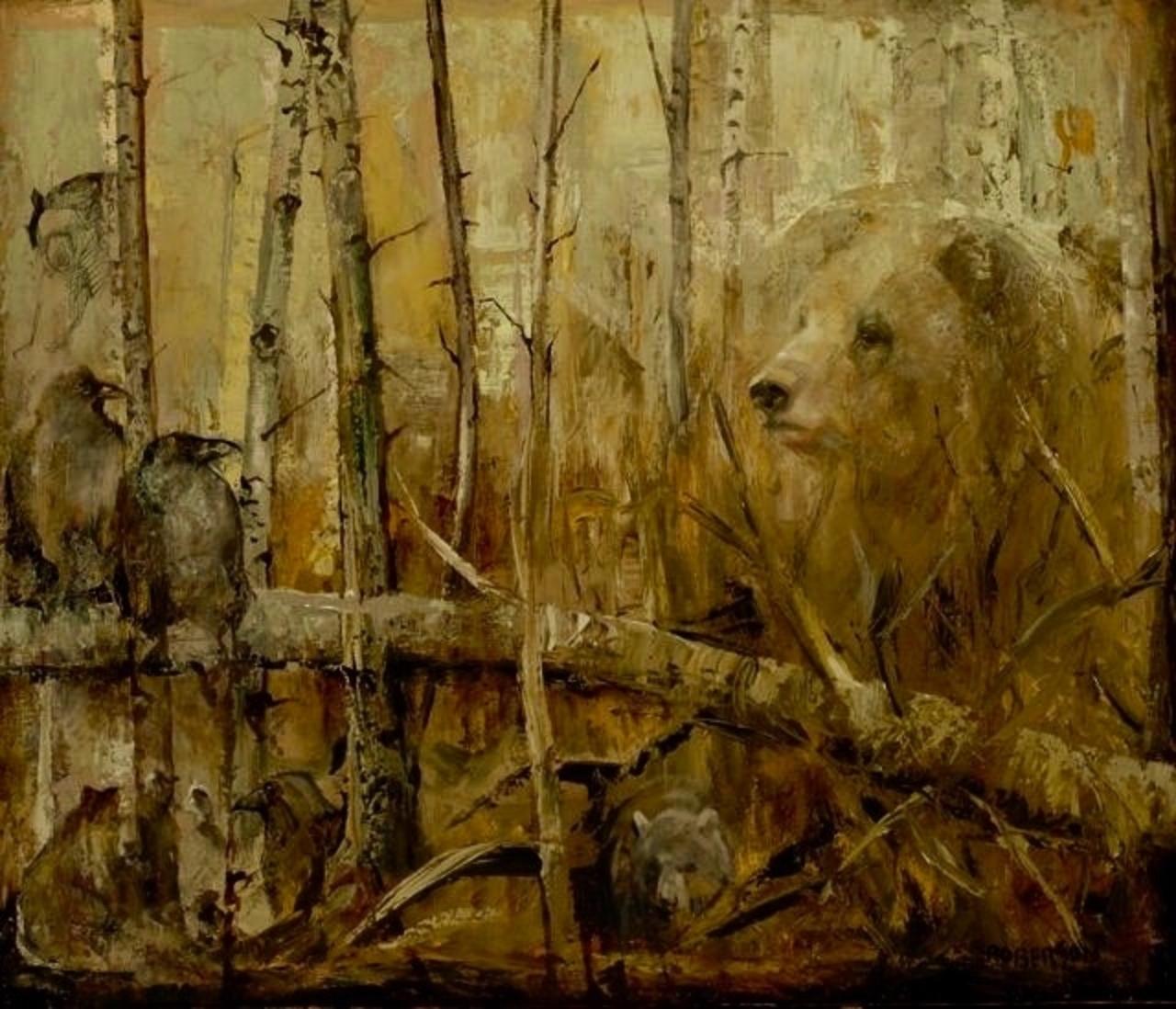 "Earth Bear" by Mary Roberson. Roberson is regarded as one of the most talented contemporary wildife artists in America. This image used with her permission. To learn more about her work, go to maryroberson.com
In a quiet place in northwest Montana, if one slows down enough, a traveler can stop to notice the swell of rose hips shining bright after a rain and holding Stewart Little-sized pearls of raindrops, micro-raindrops, by hydrostatic will alone—the elegant curve of lush-red hips so sleek as to seem to offer nothing upon which the tiny beads of water can find purchase;  yet there they are, poised to skate away, though held, holding fast—and you stop to look at them, and marvel at the miracle, while the larger world skips, skitters, stutters ahead, with time broken by—what else? us, we-the-many—into a once-ordered but now random mosaic of shards, talus and rubble, a slurry comprised not of the past but the moment in which we now stand, our every gesture as huge as they are unconsidered, we mean no harm, or most of us do not, or many of us do not, though our weight, both individually and cumulatively, is as heavy as that of moose or deer that have charged out onto a sheet of lake ice so thin as to be like glass. It shatters around our ankles, our knees, our thighs, and still we lunge forward, lean forward, hurrying along with the fragments of all that we have broken and which—having taken four-plus billion years to assemble—will not be reassembled into any meaningful form any time soon.
We all have our ways of ducking out of the flow—of averting our eyes from the rubble. Eddies of time, places where time behaves differently, acts more like it did when it was richer and fuller and, well, younger. 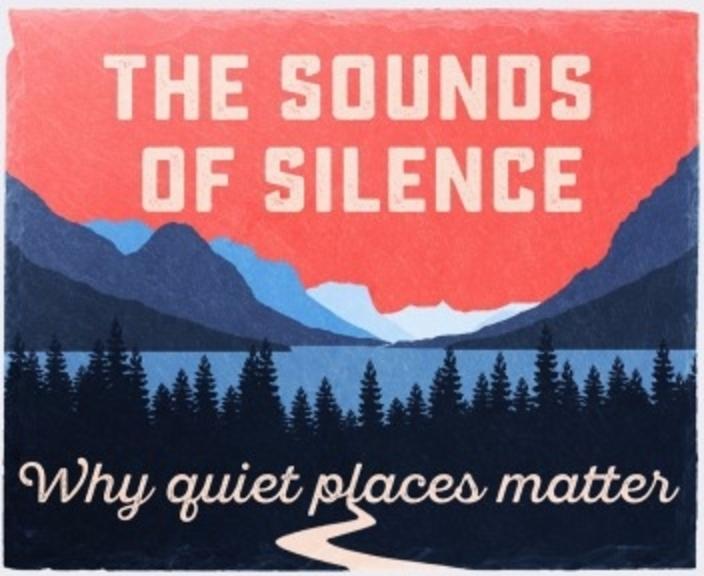 Time is composed of space, and the less space we have, the less time. A careful or observant hunter will recognize places where it—time—still exists—broken, altered, now, to be sure, but existing still in larger chunks. The general quality of these eddies is that they are quiet, and they are still specific. A raven’s double- or triple-caw. A late-season pileated woodpecker, hammering the hollow drum of an old fire-gutted giant larch: the vibrations being absorbed by the orange mulch of soil on which the listener stands.
Twenty-five grizzly bears remain here, in this tender valley. They have had much thrown at them. They are completely isolated from all other bears. Their core habitat is small and frayed already, and fraying further. Not many humans stride their tiny ridges—the valley is mostly low-elevation rainforest. Some of the bears’ alpine ridges are but the size of a suburban lawn.
Comes now, from an out-of-state hiker’s club, a motion to convert those ridges to a high-volume through-hiker trail. Twenty-five. Sit with that for a moment. Longer than a moment.

"Twenty-five grizzlies remain in the Yaak. We have other quiet places, off-the-beaten trail, to hunker down in a bower. We humans all have—for now—other quiet places, off the beaten paths, where we can go to escape the steady slurry of through-hikers, who are as well-intentioned and heavy on the ice as any of us. The twenty-five Yaak grizzlies, on the other hand—isolated—are treading water..."

I said these eddies are quiet. Sometimes we mistake quiet for silence. Sometimes some one-sound—some quiet sound—can make things seem more silent than the silence itself. A squirrel’s single morning bark—barking at you—and in that stillness, the silence before and after the barks, you can feel—can hear,I suppose—all the other beings who share the forest with you pausing, and listening. And you sit or stand quietly, waiting out the barking, which, for a while, has the effect of infuriating the squirrel further; though eventually, an accommodation is made, the squirrel becomes quiet, either distracted or mollified, and the silence comes back in over the forest in a way we don’t really have words for, other than maybe these, the-way-the-woods-sound-after-the-squirrel-that-has-been-barking-stops-barking.
The thing, silence, made stronger by one small strand of the thing that is different.
So the quiet, the silence, is not pure, as we think of such things, but it is strong, and it nurtures us, and stays with us. It can take a little of its opposite—indeed, a few threads of the opposite thing help make the thing more noticeable, more appreciated—but it cannot take too much, certainly cannot take a lot. The ice breaks easily. The specific—those things elegantly crafted by long time—need to be treated differently than the abstract, the rubble, that is the signature of our freighted passage.
Noticing, and safeguarding, the small, the quiet, the specific, is what could be called manners. It could also be called hope, by some, and beauty, by others. Still others might call it dignity. These are more abstractions. The wild ones, who are drowning beneath this flood, with the shards of our time flashing jagged against them like the collapse of the great ice dam, not so long ago, that fractured and released an ocean’s worth of time into the Pacific.
Twenty-five grizzlies remain in the Yaak. We have other quiet places, off-the-beaten trail, to hunker down in a bower. We humans all have—for now—other quiet places, off the beaten paths, where we can go to escape the steady slurry of through-hikers, who are as well-intentioned and heavy on the ice as any of us. The twenty-five Yaak grizzlies, on the other hand—isolated—are treading water, and being forced off what few high ridges there are in the valley, which the targeted through-trail now cleaves, an arrow fired through the meat, the heart, of Yaak-time.
EDITOR'S NOTE: The Sounds of Silence: Why Quiet Places Matter is part of a new series at Mountain Journal, highlighting the meaning that wild lands, remote or close by, give to our lives.
Read the first piece in the ongoing series, "On Sacred Autumn Sundays" about Montanan Mike Person, a starting offensive guard for the San Francisco 49ers, and his journey as an angler in discovering the importance of clean water.
Read also MoJo's interview with Rick Bass about the threat that a piece of the Pacific Northwest Trail poses to one of the most vulnerable grizzly bear populations in the Lower 48 states. 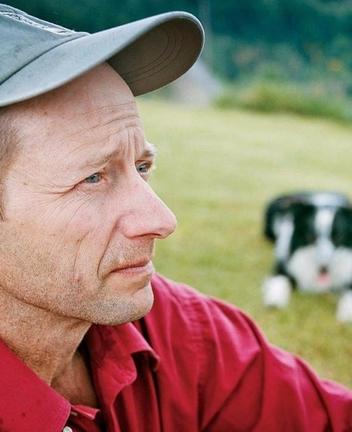 Rick Bass is hailed as one of the foremost American nature writers of his generation. A Texan by birth, Bass (b. 1959) makes his home in the far northwestern corner of Montana,  in a remote valley known as the Yaak.  Bass has gained acclaim not only for his literary talent but his role as an advocate for protecting still-wild places and the creatures that inhabit them. He is a dear friend of Mountain Journal.
Read more