With 'Cold Country' A New Writing Star Is Born 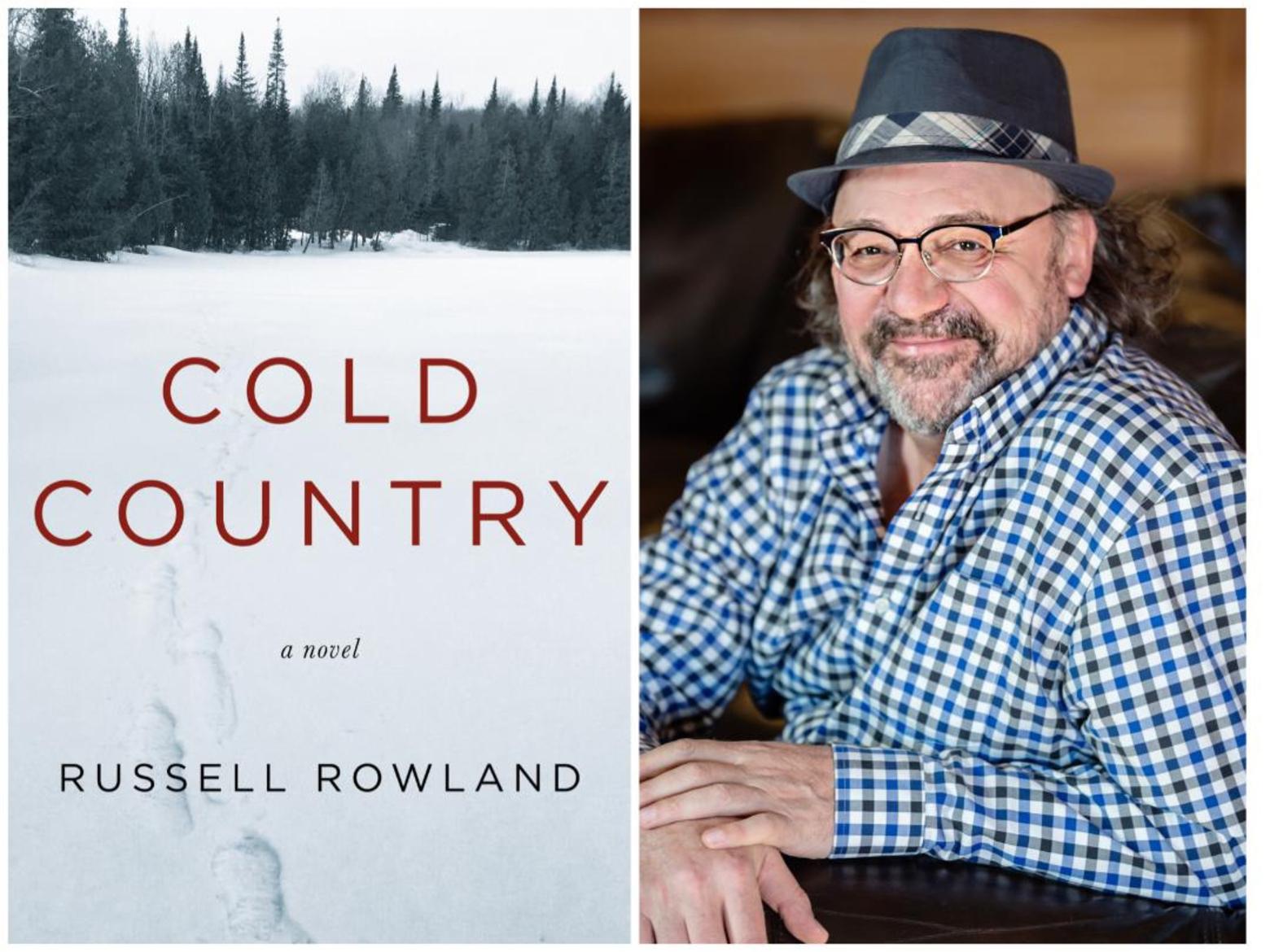 Russell Rowland and his novel which recently caught a fresh wave of acclaim.
As I reflect on Montana author Russell Rowland’s latest novel, Cold Country, it’s hard to imagine explaining it better than Montana 1948 author Larry Watson. On the cover of Rowland’s new mystery, Watson writes, “what makes the book exceptional is Rowland’s way of finding extraordinary drama in ordinary lives.”
I kept this in mind as I dove deep into Rowland’s latest, which takes place in Paradise Valley, Montana winter 1968. Paradise Valley, a real place, has the Yellowstone River running through it and extends south of Livingston with the Absaroka mountains on the east side and the Gallatin on the other.
Rowland's characters are rich in personality and conflict. They are human, and their struggles are relatable, even timeless—and a lot of this is portrayed through the eyes of a child.
“Much of this book is loosely based on a period where my dad took a job working on a ranch in the Big Horn Valley,” said Rowland. “I moved it [to Paradise Valley] because some of the characters would be familiar to the people in that area. So Roger is basically me, Carl is my dad, etc. We moved there in '67.”
Cold Country has a remarkable ability to get the reader to care and to empathize with this unlikely cast of men, women and children who struggle to stay united as an unsolved murder threatens to bring out the worst in their small ranching community.
Below is a conversation I had with Rowland recently, focusing on his motivations, inspirations, his writing process and more. 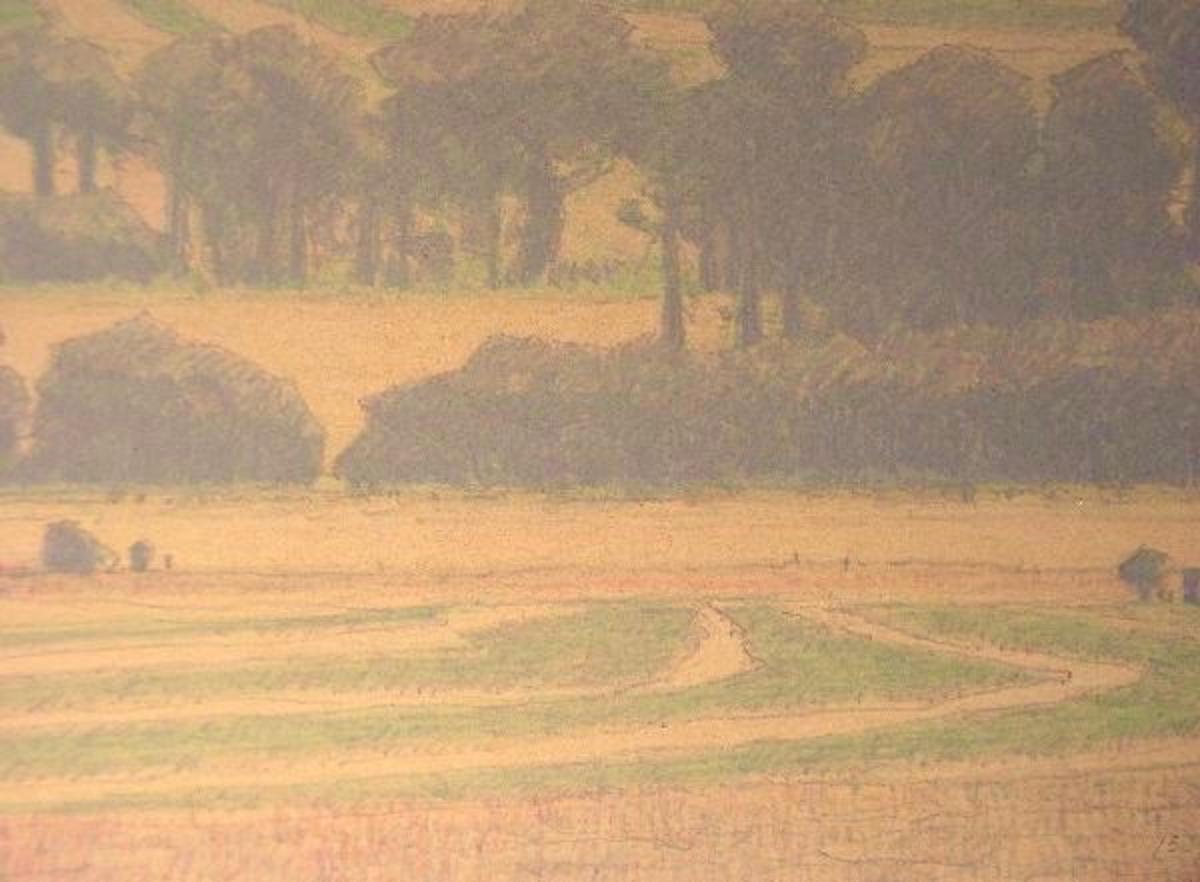 "Hayfields," a lithograph by the late Russell Chatham. Rowland's book is set in Montana's Paradise Valley which serves as a surrogate for a drama inspired by his own childhood in the Big Horn River Valley.
CHARLIE DENISON:  What enticed you to go the direction of a murder/mystery novel? Did you know that's what it was going to be when you started writing it? What was the initial idea and how did it ultimately become "Cold Country"?
RUSSELL ROWLAND: Ah yes, the mystery! This book was not intended to be a mystery, and I honestly don’t think of it that way. But I understand why they classified it as a mystery, and it probably hasn’t hurt sales. But the intent of this book was to explore how a small ranching community is impacted by a tragedy like a murder, and how the tension is especially compounded by having a new family in the community. We moved to a ranch when I was ten, and it was an extremely close-knit community, so although they were friendly, there was always an air of distrust toward us, and I wanted to explore that in a novel. I threw the murder in to intensify that dynamic.
DENISON: Who are some authors you admire, this genre and beyond?
ROWLAND:  My favorite authors cover a wide variety of styles. I don’t read mysteries, which is kind of funny, I suppose. But my favorites are James Joyce, Faulkner, Wallace Stegner, Willa Cather, and in terms of contemporary authors, I think Louise Erdrich is the best living writer. I consider The Last Report of the Miracles at Little No Horse to be a perfect book.
DENISON:  Little Roger Logan is based on you, but all the other characters around him really came to life, as well. What other characters did you find yourself identifying with the most? And how did your perspective of these characters change when picturing them from the eyes of a young boy?
ROWLAND:  I’m glad you brought this up, because I was inspired to explore this story from a child’s perspective by one of my favorite novels, A Death in the Family, by James Agee. That book starts with a young father being killed in an auto accident, and much of the story is told through the eyes of his young son, trying to make sense not only of the death, but of the way everyone is responding to it. So what I was really hoping to convey with Roger’s point of view is how much the behavior of adults impacts the children in a community. As far as identifying with the other characters, Carl is based on my dad, and he’s probably the most like me, actually: someone who struggles with his decisions, and with guilt.

"What I was really hoping to convey with Roger’s point of view is how much the behavior of adults impacts the children in a community. As far as identifying with the other characters, Carl is based on my dad, and he’s probably the most like me, actually: someone who struggles with his decisions, and with guilt. "                            —Russell Rowland

DENISON:  Which characters surprised you the most? And what kind of freedom did you give them to make their own decisions? Would you say some of your characters had free will?
ROWLAND: That’s a great question. And yes, my characters always have free will when I’m writing a novel. That’s one of the greatest joys of writing fiction…the story never goes where you think it will, and the characters DO surprise you. I loved Babe Ruth as a character because she was so unpredictable. And of course you eventually find out why, but it was such a great way of giving the story a little jolt here and there to have a character like that. Tom Butcher was also one of my favorite characters to write, because he’s seemingly so confident that you can see him doing just about anything and getting away with it.
DENISON:  Did you know who killed Tom Butcher all along? Or were you trying to figure it out for a while yourself?
ROWLAND:  I did not know. And in fact this book had several endings as it went through the various edits. I started this book about 25 years ago, so it’s been through more drafts than I could possibly count. I’m not sure how many different people ended up being the murderer, but it was at least three.
DENISON:  What did you learn from writing this novel? What did it teach you about the rural west in the 1960s?
ROWLAND:  Another great question. I had some pretty strong feelings about the people who lived in that community where we moved when I was ten years old, and this book helped me develop a little more empathy for them, which is generally what any novel ends up doing for me. Trying to imagine what it must be like to live in a community where every move you make is so closely scrutinized, and where you can be so completely isolated from everyone else if you piss off the wrong people, was interesting to explore. I love small towns, but I honestly don’t think I could live in one.

"Trying to imagine what it must be like to live in a community where every move you make is so closely scrutinized, and where you can be so completely isolated from everyone else if you piss off the wrong people, was interesting to explore. I love small towns, but I honestly don’t think I could live in one."  —Rowland 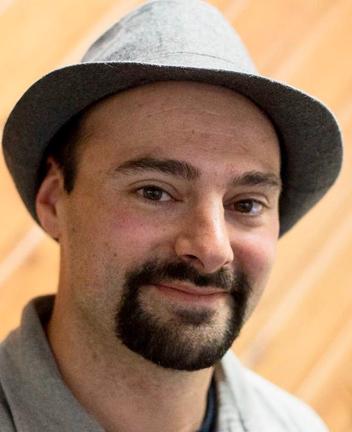 Charlie Denison is a freelance writer, musician and award-winning
journalist. He lives with his wife in Lewistown, Montana, where he is
the senior reporter for the local newspaper.