Columnist T.H. Crawford tries to make sense of changes shaking the foundations of places he loves

In the Emerson Cultural Center, home to an old converted Bozeman grade school named after writer Ralph Waldo Emerson, there is a renovated auditorium that functions as a hub for entertainment downtown. Major musical acts have taken the stage there. So too have opera performers, school bands and choirs, remembrances held for the departed, a parade of famous public speakers and movies showing as part of the Bozeman Film Festival.


The Crawford Theater is named to honor two benefactors, Tim and Kathy Hansen Crawford. The former will be penning a regular column for Mountain Journal called “Citizen Crawford.” Ask yourself:  What do you get when you cross a fiscally conservative businessman and connoisseur of fine sporting guns with progressive instincts, who once had a bumper sticker made that read “Armed and Liberal”?


Readers of MoJo will soon find out.
High Country News once described Crawford as "an all-around maverick."
“I was born on the eve of WWII. I spent my formative years in Los Angeles during the war and the great postwar expansion coincided with parallel growth of smog," Crawford told MoJo recently. "It did not take long that from a growing aversion to the toxic qualities of sprawl, traffic and urban air developed a desire to find better environments."


Few readers, including those who may think they know Crawford relatively well in Bozeman, are familiar with the breadth of his life experience.  His family were co-owners of Santa Rosa Island, today part of Channel Islands National Park, located off the coast of Santa Barbara.  He was exposed to ranch life as kid, growing up hunting and fishing, while gaining a classical education.  Later, following a few years of Jack Kerouac-like adventures on the road, he headed north and served as a publicly elected commissioner for the city of Ketchum, Idaho, the place in the West where Ernest Hemingway lived and died.


Ultimately, Crawford's desire for a wilder nature led to Montana. “A move to the Bozeman area some decades ago seemed damned fine,” he said. “Somehow the more deleterious effects of rapid urban expansion have followed me. I think the Mountain Journal is a good avenue to express my sentiments of why the excesses of urban development are toxic to quality of life. I have seen them firsthand.”
Crawford's rule: If you are going to move to a place, become a responsible citizen by educating yourself about its special qualities and then fight like hell to prevent them from ruin by people who don't know any better.


MOUNTAIN JOURNAL: You spent your childhood in and around Southern California.  How would you describe the transformation of landscape that has occurred there and what are a few of the warnings you would offer to human denizens of Greater Yellowstone?


TIM CRAWFORD: Having grown up and spent a good bit of my life in Southern California in the postwar years of rapacious growth, and seeing almost all the natural environment sacrificed to development, I became inured to growth as a shibboleth of value. So I would advise those who share my love of the natural existing values in the Greater Yellowstone area to beware of those who promote bigger as better. And to my fellow citizens, I encourage them to vote for folks who will recognize that most developers’ promises are of chimerical community value.


MOJO: How does your life experience inform your thinking about what it means to be a citizen? 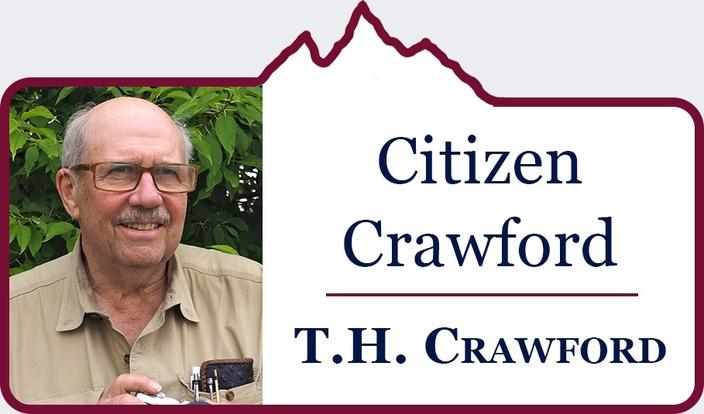 CRAWFORD: My early life was spent in an economically secure and emotionally insecure setting. My parents divorced and with father going off to war, I lived with my grandparents. I have no memory of my father for most of the first decade of my life, but plenty of remembered impressions of war fear later supplanted by the worry of nuclear war.


Not a secure foundation. I do remember, with some fondness, of somehow getting a job at about 12 years old, riding the bus several miles to a gun store where I was paid the handsome sum of 25 cents an hour to clean the fingerprints of customers from the guns. The store was frequented by all manner of adventurers, from Spanish-American war vets to Hollywood folk.


CRAWFORD: Heaven for a young person already longing for adventure beyond the confines of an ever-less pleasant city. My family sent me off to a private school that had a lot of outdoor activities and then to a college prep school, where as strange as it must seem now, we could hunt and trap. Summers were spent doing ranch work, bucking hay, fencing, ditch digging and horse breaking with the odd bit of cattle doctoring and of course fishing—often supplying trout for my family’s dinners with their friends.


I got on to firefighting crews in the Douglas fir country of Northern California, followed by a stint in the spruce and tundra north of the Arctic Circle in Alaska. I could go on at length about the odd jobs and places I have worked since becoming an early college dropout in the fabled ‘60s. I think I would prefer to touch on some of these in future tales. Suffice it to point out, an amazing number of jobs a person can have, held in a life of ineptitude.


MOJO: You live on a farm in the Gallatin Valley, you have a ranch out near Roundup and are a businessman in downtown Bozeman, owning the building at the corner of Main and Tracy. You were among the first entrepreneurs decades ago to carry out a major historic renovation.  Why did you believe in Main Street when so many modernists were abandoning downtown and saying Bozeman's future and destiny resided out in the strip developments of North 19th?


CRAWFORD: I am fortunate to have a quite wonderful small ranch in the Gallatin Valley which is a fairly comfortable distance from Bozeman, though the development seems to be creeping inexorably toward us. This ranch is a real jewel consisting of about half its 350 acres of land which I farm with relative seriousness and the remainder untillable, perfect for wildlife, the propagation of which I take as a challenge to maintain if not improve through the control of invasive weeds. A great life providing core is a couple of miles of the winding and braided East Gallatin River.

Crawford is revered by his friends for the number of thought-provoking, mischievous bumper stickers he's created over the years. This one, which adorned the bumpers of many of his pals' vehicles (from pick-ups to Subarus), always turned heads.
MOJO:  You believe in ecological, historic and property restoration.


CRAWFORD:  My properties truly are a great match for my mixed natural and cultural interests. I acquired a building in downtown Bozeman about the same time as the farm. It was a badly treated old brick bank building covered with odd yellow and brown paint. Inside it reeked of permanent hair conditioner, having been a place for the teaching and purveyance of women’s uppermost beauty and cheap bad haircuts for those aspiring to work in hair parlors. With my building manager’s help it became the second old building refurbished from new to approach its old comeliness.


MOJO: A lot of people are grateful for you helping to rejuvenate the spirit of downtown.


CRAWFORD: I was and still am amazed that people have stopped me on the sidewalk and thank me for its transformation. What seemed a good idea at the time has now morphed into a level of re-gentrification by people whose pocketbooks enable and far exceed the elegance of utility.


Unfortunately, this growing extravagance necessitates much higher rents and has resulted in the replacement of many old locally-owned family businesses with the newer trendy shops and restaurants so comforting to the tastes of those more newly arrived in our community. Who and what does Bozeman serve? I will expand on this in future forages.


MOJO: Some also may not realize that you are a professional nature photographer and occasionally have showings of work around town.  How does your perspective behind the lens shape the way you think about landscape?


CRAWFORD: I have been a working photographer for almost five decades, now concentrating on my own views of nature. I occasionally exhibit locally, often finding most folk think my community involvement is primary to my life’s photo work. Oh, well! My work in architecture and nature has given me some serious thoughts about size, color and proportion in community buildings, also best left to elaborating on in another time and column place.


MOJO: A few years ago you helped underwrite the cost of restoring the main theater in the Emerson Cultural Center and you spearheaded an effort to have solar panels installed on the Emerson's roof. What's the most frustrating thing for you about the state's approach to climate change, coal, and renewable energy?


CRAWFORD: One of my quiet pleasures is the Emerson Cultural Center of which I was an original founder. It has been a real enjoyment seeing it develop into a cornerstone of the community, providing cultural enjoyment and expression for all ages in a historic building of continuing compatibility with the community. Several projects of grandiose and ill-suited proportions, at least to my sensibilities, have been presented by developers in Bozeman over the years and many have lost momentum. Some people are trying to transform our town into a place that’s lifted from the playbook of other ruinous communities. The history and tastefulness of the Emerson speaks to the values most of us savor about Bozeman and I’m proud to have been associated with it for the last twenty-five years.


MOJO: As for your belief in the future of renewable energy?


CRAWFORD:  Renewable energy isn’t just good for the planet. It’s smart for business. The Emerson has a roof top solar energy system which provides 20 percent of its energy use, not bad for a less than tight building serving people coming and going day and night. This is a significant example of renewable power in a recycled public building which should help expand demand for much more of the same.


MOJO: As a MoJo columnist, you're going to write about whatever suits your fancy, but you'll be drawing upon your background, mentioned above, and delving into politics, observations about growth, gun ownership, and other topics, sparing no one.   When it comes to literature and social commentators, who are a few of your favorites of the moment?


CRAWFORD: In light of the foregoing, I am, in this moment, following the likes of Bill McKibben and James Hansen with their writing about climate change and hopefully more of Paul Krugman and Naomi Klein.
Increase our impact by sharing this story.

GET OUR FREE NEWSLETTER
Never Miss A Big Story!
Tags: Citizen Crawford

In Divided West, Sara Flitner Guides All Sides Toward The Radical Middle
Sara Flitner grew up a rancher's daughter in a conservative part of Wyoming and then went on to become mayor of...
Read
Community, Community Change, Conservation, Grand Teton National Park, Jackson Hole, Media, The New West

How A Gutsy Newspaper Helped Save The Natural Essence Of Jackson Hole
Grand Teton National Park, as we know it today, might not exist were it nor for truth-demanding media battling against real...
Read
Community, Community Change

Even In Paradise, Everyone Needs To Heal Something, Especially The Seemingly Invincible
Confronting the myth of perfection, columnist Timothy Tate, a practicing psychotherapist in Bozeman, writes about "distress" accompanying radical changes in mountain...
Read
Back to home