Back to Stories
Growth—Good, Bad & Ugly 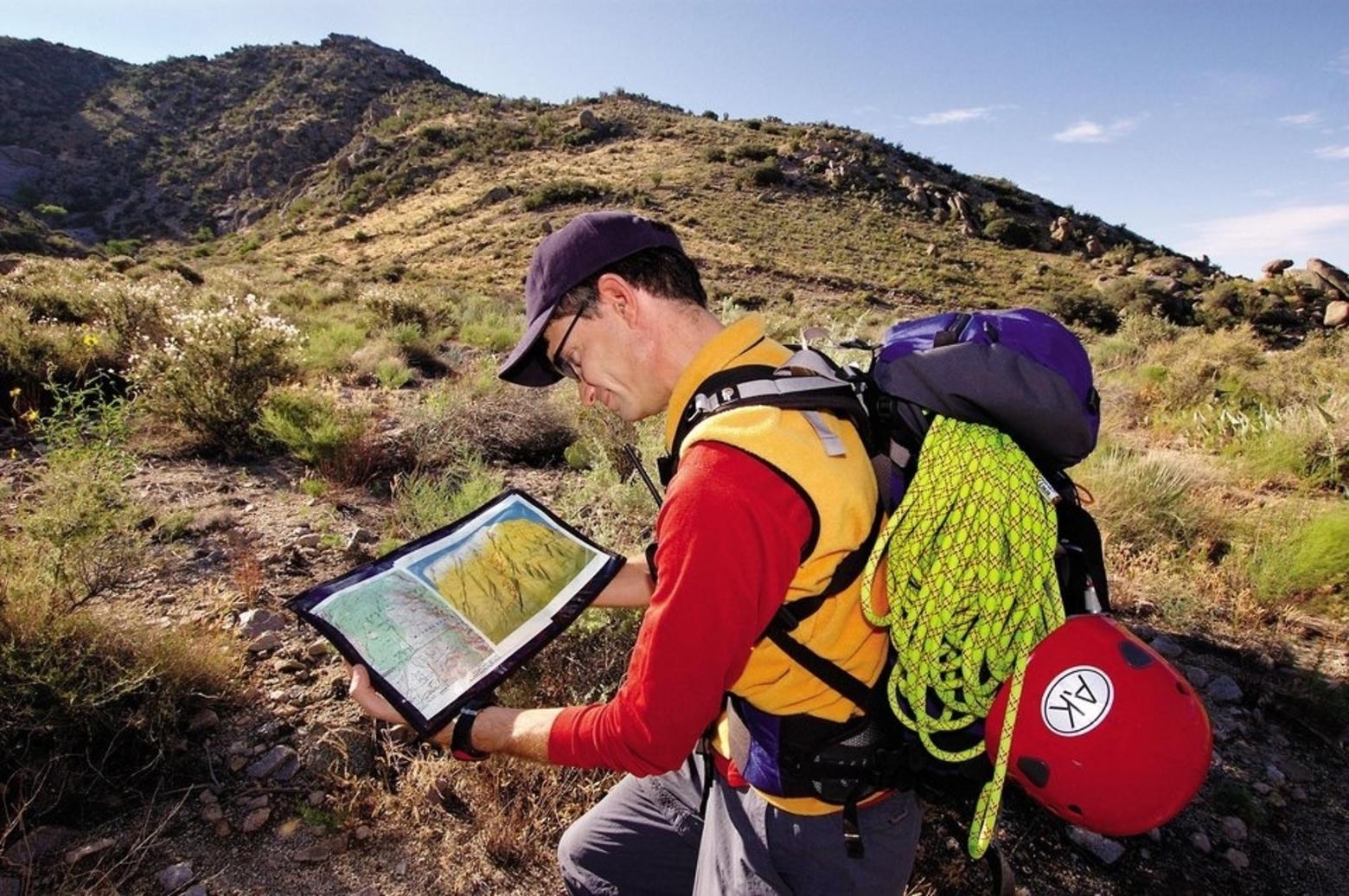 Photo courtesy US Department of Energy
The 911 dispatcher’s calm voice comes over the pager: report of a person calling for help in the woods, in a rural subdivision 40 miles south of Ennis. My neighbor and I are the closest first responders, and we roll out from our remote volunteer fire station.
We approach the end of the single-lane gravel road, where the rolling sagebrush and aspens give way to a wooded ravine. Neighbors see the fire truck, and cluster around us in the dark, flashlights waving around and lighting up their sandaled feet.  They excitedly tell us what they heard: someone yelling loudly: “Help!  Help! Hellllllp!”  The voice came from down in the ravine. 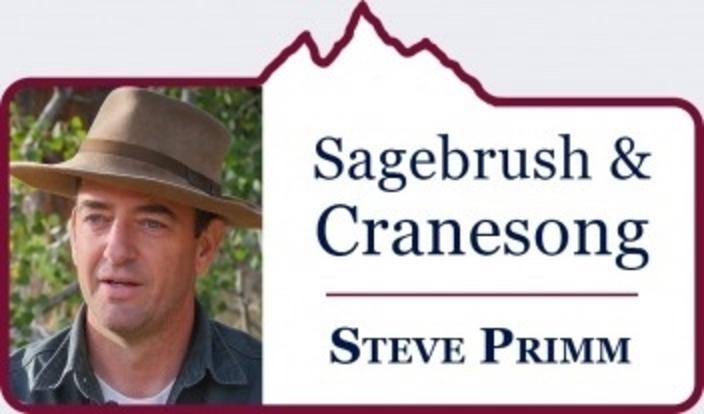 I climb atop the truck and raise our flood lamps, so we can light up the immediate area.  My neighbor radios another fire truck across the ravine, in a different part of the subdivision.  The neighbors there tell a strikingly consistent story:  a high, frightened voice, calling for help.   My neighbor and I step away from the crowd to confer in low voices.  “Coyote?” I venture.  “Or cat,” replies Scott, “But probably a coyote.”
By “cat,” he means mountain lion.  Thus far, there is no person unaccounted for.  Nonetheless, we have to go see if someone is down there in the woods.
This place used to be a ranch – a few thousand acres of bunchgrass, sagebrush, and scattered aspens, sloping from the sparkling Madison River up to a precipitous earthquake fault. Before it was a ranch, homesteaders tried to farm here in the 1880s.  Alluvium and hard winters broke them. Before that, the Blackfeet and Bannock hunted bison here.

They excitedly tell us what they heard: someone yelling loudly: “Help!  Help! Hellllllp!”  The voice came from down in the ravine. The subdivision folk keep talking about a grizzly with cubs they’ve been seeing, and they obliquely link the cries they heard with some gory fate.

The subdivision folk keep talking about a grizzly with cubs they’ve been seeing, and they obliquely link the cries they heard with some gory fate.  Scott and I don’t think there’s a bear with a freshly-killed person down in there. We’re willing to go make a quick search, for due diligence sake.
Radio, headlamp, big flashlight, bear spray, trauma kit:  I gear up to drop into the ravine.  A woman offers me another flashlight.  A man steps out of the dark, holding out a holstered revolver. “.357,” he says. “You may need it.” I decline both.

Radio, headlamp, big flashlight, bear spray, trauma kit:  I gear up to drop into the ravine.  A woman offers me another flashlight.  A man steps out of the dark, holding out a holstered revolver. “.357,” he says. “You may need it.”

A team of three assembles on the north side of the ravine, maybe a quarter mile away.  I see their lights playing through the timber.  We coordinate movements over the radio, and we set off, down into the dark woods. Two other teams start going door-to-door, visiting some two dozen houses in the subdivision, trying to find out whether anyone has gone missing.
The wooded ravine averages about 100 yards wide and is roughly a mile long.  We move deliberately, stopping to scan with our lights, calling out to whomever may be there.  We look for eye shine, finding a few placid mule deer and the occasional woodrat.  We reach one end of the ravine, then pivot our teams around go back to the other.
We find no one.  Our door-to-door teams find everyone accounted for. The Madison County Sheriff’s department comes out at daybreak to search again, with fresh teams and horses. Still, no evidence of a person in need of help. 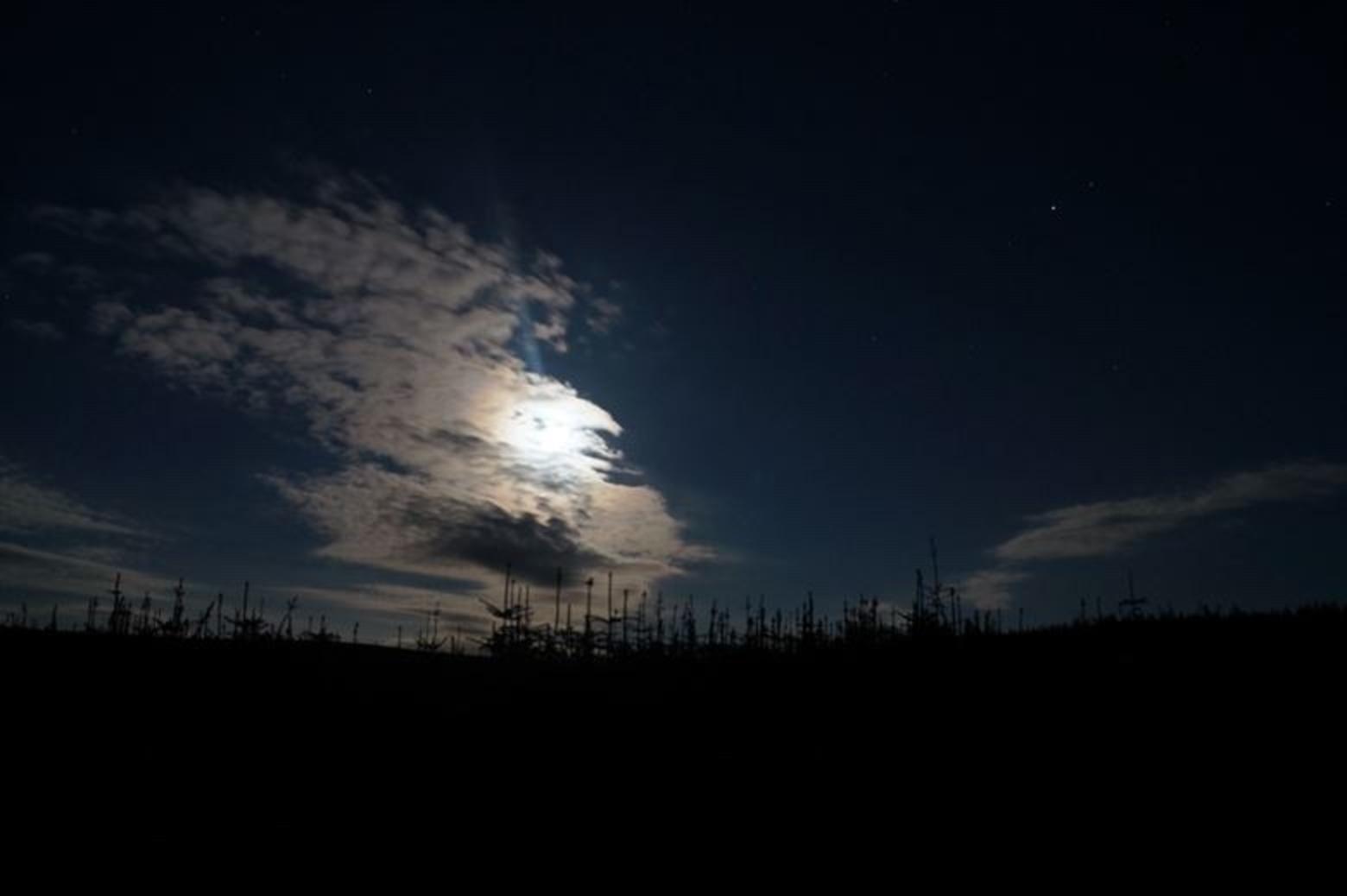 It can be vexing working for search and rescue. Time is of the essence. People can find themselves hurt bad in the backcountry and have injuries that need immediate attention or they'll perish. There's also the possibility that unless you find them alive and able to communicate their location, you may never find them.
This turned out to not be one of those tragedies.
Based on what witnesses say they heard, the likely explanation is that a coyote was vocalizing – an unnerving sound at close range, especially if you’re not familiar with their song stylings. Across longer distances in blowing breezes, coyote hips and songs can come across as human wailing.
One lesson from the search and rescue episode, involving a phantom victim, was not lost.
This high, windswept valley can be a challenging place.  Between the Idaho state line and Indian Creek (some 30 miles north), our wintertime population is around 40.  By the July peak of the fabled salmonfly hatch on the Madison River, the human population swells dramatically.
It has been that way for a couple decades.  The Madison Valley actually is in better shape than many other Greater Yellowstone valleys, having a high percentage of its private land protected in conservation easements.  Recent figures indicate that over half of the Madison’s private land is now protected.
But there is arguably less open space than meets the eye.  Take a quick tour of land ownership maps at the Montana Cadastral interactive site, and you’ll see that a lot of subdivided land is out there, a lot of it yet to be built on.  New houses are springing up rapidly now.  I look out across the sagebrush and hope that we’re approaching full build-out, but I know that many subdivisions are just getting warmed up.
Many of the subdivision residents I’ve met are good people.  During the months they’re around, they show up for fundraisers, they keep the restaurants busy, and they do their best to prevent conflicts with wildlife.  As with any group, there are some disagreeable exceptions.
For most of the 22 years that I’ve worked to prevent human-wildlife conflict here in the Madison, that community was at least fairly stable.  While there was turnover in property ownership, the patterns were somewhat predictable:  some would be around from May to November, some were around for just a few weeks of high summer.
Lately, though, that familiar pattern is tending toward chaos.  It’s not just that there are more houses and more seasonal owners.  The impact of growth is being magnified tremendously by the short-term rental market.
Growth in the short-term rental sector is hard to quantify, because there are multiple platforms that link up owners and renters.  A lodging-industry research firm reported that in Montana, AirBnB alone had $69 million in revenue in 2017, and expanded its short-term rental inventory by 83 percent from 2016 to 2017 (note: AirBnB disputed the revenue figure).
Short-term rentals make a lot of sense for property owners:  otherwise idle space turns into a revenue source, even a tax deduction. The added tourists can be a boost to local businesses, and they create mini-industries of property managers and cleaning services.  As a traveler, I have found short-term rentals to be an engaging and affordable way to experience far-flung communities.
As for the drawbacks of short-term rentals, criticism abounds, mostly centered on the dramatic decrease in long-term rental inventories for residents, and turning stable neighborhoods into high-turnover tourist zones.
Out here in the wind-whipped sage, there isn’t tremendous demand for long-term rentals.  We’re far from jobs, far from schools, and winter can be a grind.  There are other impacts, though.  Our midnight search for a non-existent missing person puts those negatives in a nutshell.
In the big picture, we can point to the distinctions between a collection of strangers and an actual community.  The well-meaning people who called 911 that night didn’t know their neighborhood well enough to be able to assess whether anyone was actually missing.
And while we certainly wouldn’t want someone to hesitate about reporting what they genuinely believe is an emergency, it’s clear that short-term visitors don’t understand that emergency services in this (and many other) counties are all volunteer. Genuine, functional communities understand the nut-and-bolts of how things get done, and that official “help” could be far away in a dire situation.  People with an actual connection to community know what happens when you dial 911 here:  volunteers will drop what they’re doing and respond, sometimes from 50 miles away.
Finally, the non-existent person search points up another aspect of these big shifts in land use:  this is wild country, where we share space with wild creatures. Beyond not knowing what a coyote sounds like, a constant cycling of new, inexperienced renters into wild places presents major coexistence challenges.
Wildlife managers and conservationists have good success in reaching stable communities where the lineup changes slowly.  We can distribute bear-resistant garbage cans and can help people assess the potential wildlife attractants around their property—everything from dog food to hummingbird feeders.  Neighbors can spread the word that a cow moose with calf is hanging out in that patch of aspens, or that a pack of wolves has been roaming along the national forest boundary. 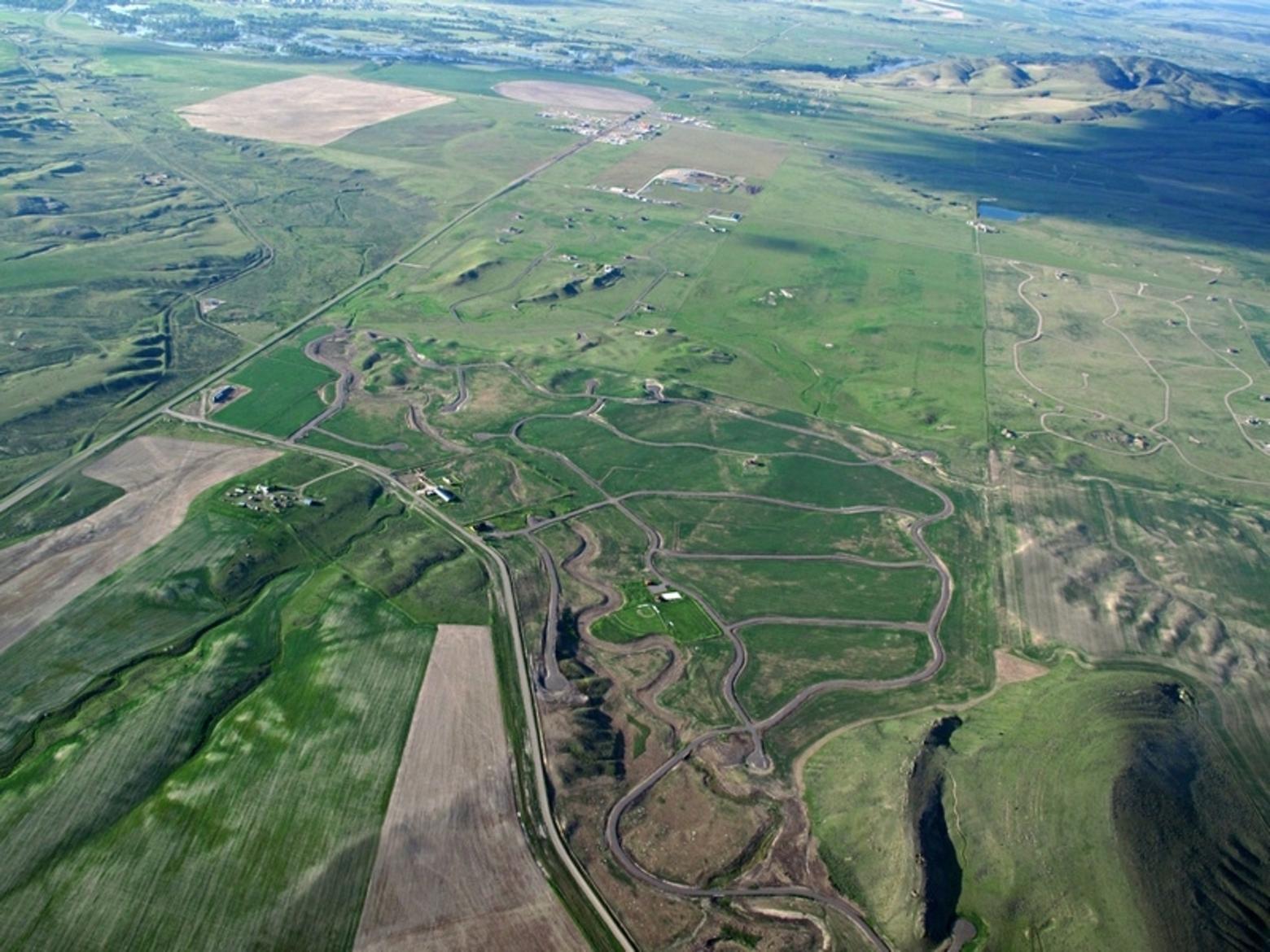 Rural development and sprawl in southwest Montana is chewing up more than ag land and open space. It is creating waves of other impacts, including rising costs for public services and more people means fewer affordable rentals available for working class folk struggling to make ends meet. Another problem: short-term workers need to be constantly educated about how to live responsibly in wild country. Photo courtesy EcoFlight (Ecoflight.org)
Long-time seasonal residents are easy to reach, and most have a sense of commitment and responsibility to their wild neighbors.  A weekly influx of un-informed newcomers who are only here for a few days is a different challenge altogether.  To see the nightmare fully elaborated, visit Big Sky, where bear managers are pulling out all the stops to get short-term renters to keep food and garbage away from black bears. Bear Smart Big Sky just unveiled a charming cartoon bear named Bernadette, in hopes of getting visitors attuned to the need to prevent conflicts.
Growth is one thing – more houses on the landscape, more traffic on the roads, more demand for services like snowplowing and firefighting.  Growth plus new ways of churning customers—as opposed to citizens—through the wildland-urban interface has the potential to exponentially compound those impacts.
An old bachelor named Garnett used to live—with a few dozen cats—on a homestead several miles away across the valley from where we searched for the person who was not there. Garnett in his boyhood had seen the last few heedless sodbusters fade away.  In his dotage, he predicted the new settlers, too, would one day break.

The Perils Of Going Along To Get Along
What does it say about us when we have leaders who don't have the courage to act?
Read
Bozeman, Growth—Good, Bad & Ugly

It's Election Season And The Future Of Bozeman Is At Stake
Bozeman is the fastest-growing city in Montana and Tim Crawford questions whether its elected officials are capable of dealing with the...
Read
Co-existence, Growth—Good, Bad & Ugly, Community

Denial No More: Bozeman's Boom Is Coming At A Steep Cost To People, Community
If growth produces "winners," then who and what are the "losers"?
Read
Back to home