When We Become Wildlife's Uninvited Guests

Susan Marsh laments that rising numbers of people are crowding animals out of their backcountry habitat but what to do about it—that's the question. Would you change your plans to protect wildlife? 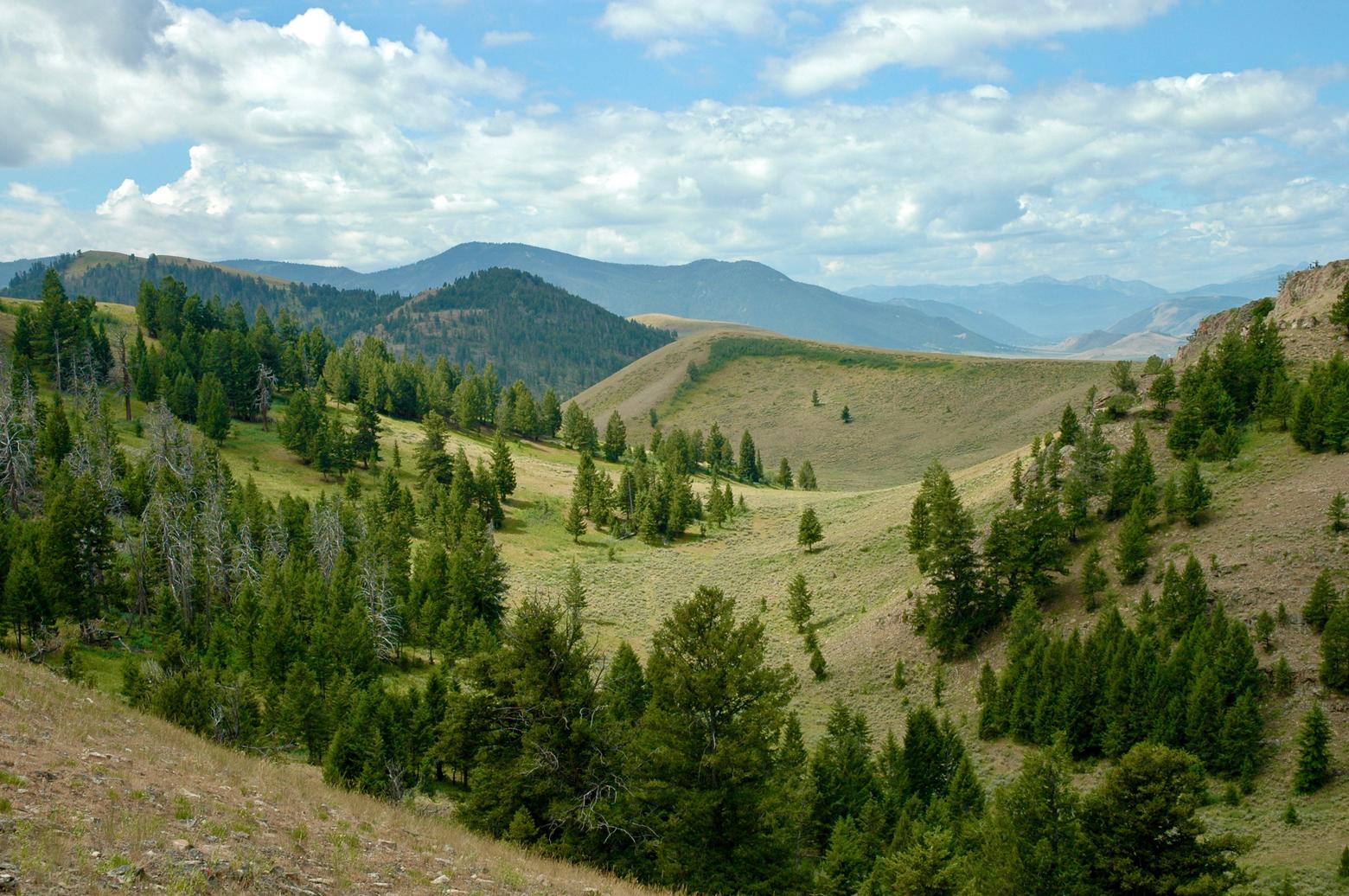 We all have our favorite enchanting retreats in the backcountry and we believe we have no impact. But when Susan Marsh became aware that her presence was disrupting wildlife, especially amid record numbers of other humans invading nature and in a year like this when low water and heat are stressing wild species , she took bold action. Photo courtesy Susan Marsh
“I learned pretty quick that if you just sit quietly and mind your own business, Mother Nature will come to you. If you see a grass snake in the summer, it will scurry away or swim across the river, but if you don’t move and just stay there, eventually, it will turn around and come back, and it will go about its business.” …Gerald Stratford, British gardener in The New York Times, July 19, 2021
by Susan Marsh
It’s not clear to me that, if I sat on a knoll and snoozed awhile, I would awake surrounded by wildlife going about their business. I do notice that my presence in the wilds causes everything, snipe flies excepted, to scoot away. I feel badly about it, not wanting to disturb. At the same time, I have more reason to feel like an intruder than most people who limit their hiking to established trails.
I’ve sought the untracked spur ridge and remote wildflower park for most of my life as a backcountry hiker, and for most of that time it has seemed (to unobservant me) that I committed few acts of outright disturbance to wildlife.
That’s likely because I didn’t notice, or the wildlife melted into the brush long before I arrived.
A few encounters remain in my memory as cautionary tales, if only because they struck me as unusual at the time. Once while skiing in the upper Lamar Valley in Yellowstone National Park, our group spotted a dozen elk on a bare slope, probably a half-mile away. This was years before wolves returned to Yellowstone, so as the elk paused to watch us and then trotted up the slope with their heads thrown back, I was surprised at their timidity.
We were still quite distant and were headed at an angle opposite the slope where they grazed. Yet the cause of their disturbance was obvious—us. We conferred for a few minutes and decided to turn back. 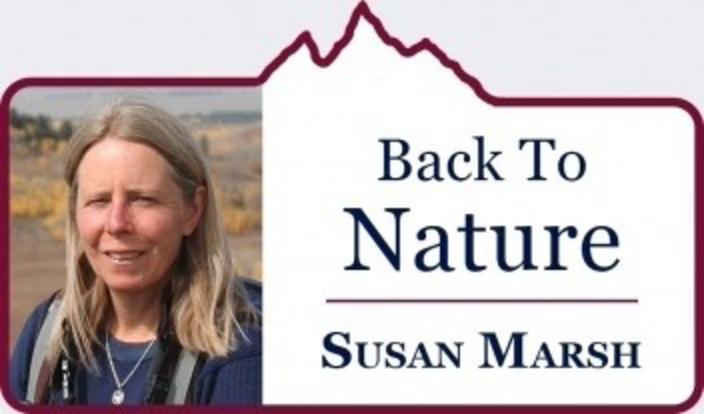 This was a first-hand experience of what researchers have found, that human presence disturbs wildlife at a much greater distance than we imagine. Most of the places I go don’t offer an expansive view of all surrounds me like the wide, open Lamar Valley does, so I’m even more likely to cause stress for wildlife with an unexpected appearance.
A couple of years ago I walked into a favorite aspen stand and sat down in the dry grass. Immediately I heard some rustling behind me, and looked around to watch a bull moose stand up and hurry away. Shit, I thought. Sorry, mister. I had been completely unaware of him resting in the shadows until I settled in not twenty feet away.
Mr. Stratford might have suggested I keep sitting a while and perhaps the moose would return, unconcerned by my intrusion. I’m pretty sure that wouldn’t have happened.
So, this is my ethical dilemma as a seasoned off-trail rambler. Do I abandon the freedom of the hills for a system of increasingly human-clogged trails in order to be outdoors, thus having little chance of finding the kind of spiritual refreshment I seek? The idea doesn’t thrill me, but as more of us H. sapiens invade the last stronghold of the mountains, is it ethical to act as though it is still forty years ago when fewer of us entered more acres of undisturbed habitat and perhaps it didn’t matter as much as it does now?
Back then, if you wanted to reach the deep backcountry you walked or rode a horse. Now there are various mechanical and motorized conveyances that allow us to swallow up large areas in a single day’s outing.
Some old-timers who have been around longer than I have will grumble about the new uses and new people invading their secret spots. I get that. When a hidden valley where you used to find solitude becomes the next poster-place on Instagram, when you start finding litter on freshly beat-in trails that never used to be there, it feels like a personal loss. For years you have kept those quiet, sacred places to yourself, so if they’re crowded now it’s not your fault.
True enough. But I’m reminded of the standard excuse that people of the dominant culture trot out when confronted with atrocities of the past—I wasn’t around during the Indian wars, I never had slaves, so don’t blame me. Yet, we are all here now, dealing not only with the sins of the past but those of the present, and it’s our turn to try to make amends.

Just because I was lucky enough to be here in this wild region a few earth-breaths before the sudden and accelerating influx of newcomers, it does not give me the right to continue acting as if we aren’t collectively causing our much-touted wildlife to vanish farther into the backcountry where they can live in peace.

The image of a grass snake returning to the sphere of a human in repose is one I’d like to hold and replicate. Is there a way I can continue rambling, staying out in the open or making branch-cracking noises to keep wildlife from being startled? Is it better to let them wander away from me before I approach instead of having to jump up and run? Should I announce my presence or curl up under a tree to nap?
Are any of these strategies acceptable?
I’m still out there, and probably causing unknown trouble for the wild residents. Locals in Jackson Hole have been sporting bumper stickers this summer with a simple two-word message: Go Home. If the same product were offered to the local wildlife, it would probably sell out in minutes.
During a recent off-trail ramble I came over the crest of a gentle ridge to find a pair of red-tailed hawks on the branch of an aspen snag with a pronghorn feeding right below them. It was the perfect picture of peaceful coexistence, I thought—until I came on the scene. I stopped, planning to change my route, but it was too late. The prongie ran off and the hawks were in the air yelling at me.
This is a place where I have hiked alone many times. I knew about the red-tail nest and chose routes that avoided it with a wide margin of error. I knew the pronghorns were scattered around the dry open hills east of the National Elk Refuge. If I ran across one I would change direction and look away to let it know I wasn’t on the hunt. It would watch me go instead of running off.
Not this time. I’d wandered in the same general area often enough this year that I had come to flatter myself that the wildlife recognized me. They watched me bending over to photograph wildflowers and ambling about in a non-threatening way, usually wearing the same faded shirt and shorts. Hey guys, it’s only me, I wanted to say.
Wrong. Even if the pronghorns didn’t run off they were eyeing me warily. The only wild creatures that accept me, however reluctantly, are the ones in my back yard – a red squirrel and a family of crows who share the peanut butter I smear on top of the bird feeder.

I’d wandered in the same general area often enough this year that I had come to flatter myself that the wildlife recognized me. They watched me bending over to photograph wildflowers and ambling about in a non-threatening way, usually wearing the same faded shirt and shorts. Hey guys, it’s only me, I wanted to say. Wrong. Even if the pronghorns didn’t run off they were eyeing me warily

After pissing off the red-tail pair I determined to avoid that favorite hike for the rest of the summer, along with another one nearby where prairie falcons are busy raising their young. Most species of wildlife, like humans this summer, are stressed by heat and drought and wildfire smoke. Waterholes are dry and in many places food is scarce. The last thing they need is to be caused an unnecessary expenditure of energy.
But I can’t not hike, if I wish to retain my sanity. For my next outing I plan to hit the trail with a couple of friends as we brave one of the most popular spots near Jackson. It’s not the same as taking off alone, but being with others is another kind of joy, and most of the people we’ll encounter are out there for the same reasons we will be. It will be a fine day, and because of the concentrated use along that trail, the wildlife will know what to expect from us and will know how to get away. 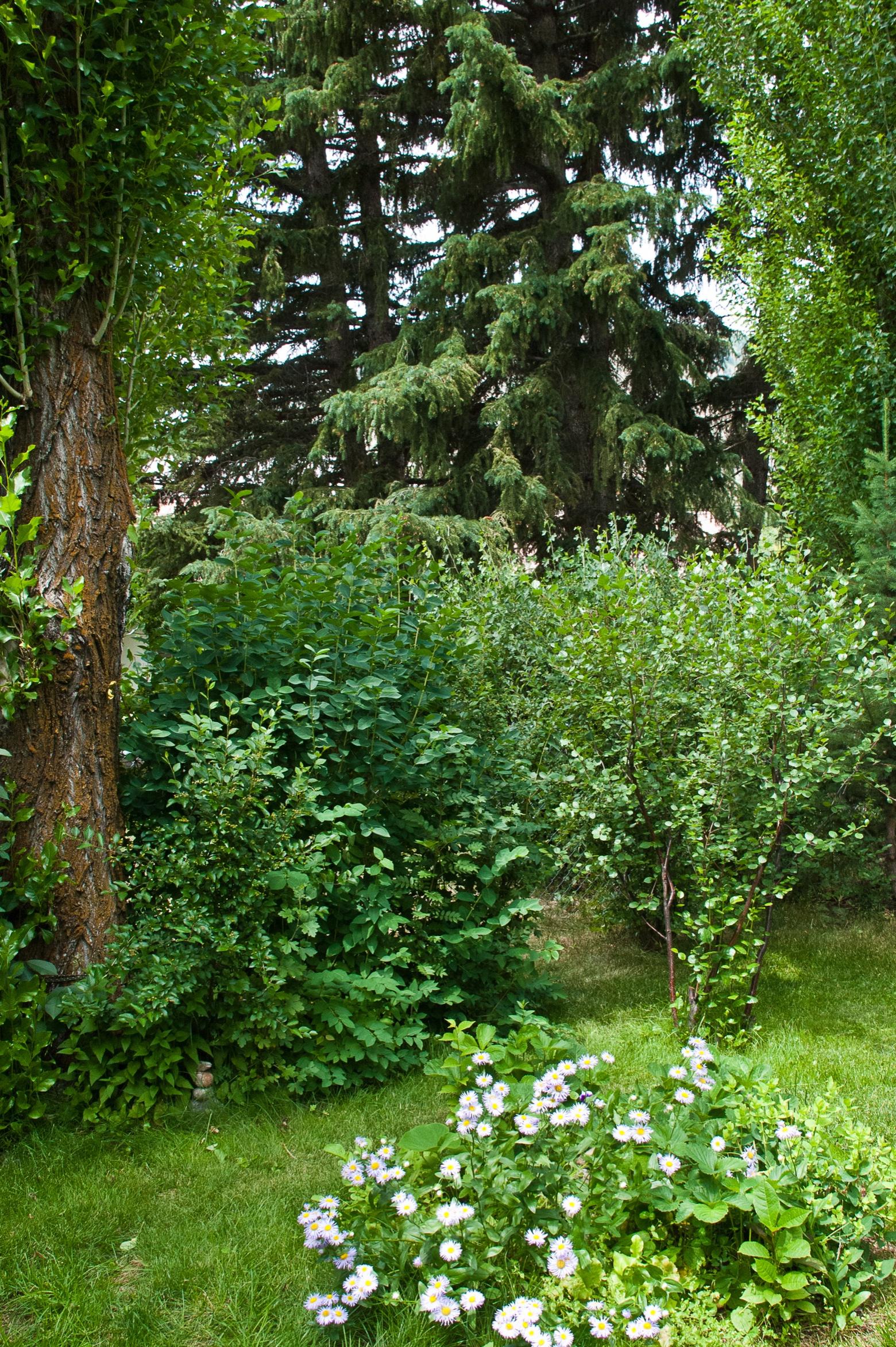 Rather than trying to rationalize her impact, Marsh decided she would alter her behavior and go elsewhere instead of displacing wildlife . This is her backyard. Photo courtesy Susan Marsh
For today, my choice is the back yard. It’s not much of a hike at 1/5 acre, but it’s shady and visited by songbirds, butterflies and bees. I can stay home instead of sitting in stop-and-go traffic for an hour to find an overflowing trailhead at my destination.
Over the years my little yard, designed with native plants as its foundation, is as wild as possible for an in-town neighborhood. Last evening the first batch of ants sent their newly winged queens into the air, backlit by the evening sun like tiny angels ascending toward heaven. The ants are as wild as the hawks and pronghorns. Best of all, as they set about their business, they completely ignored me as I bent over them to watch, enraptured.