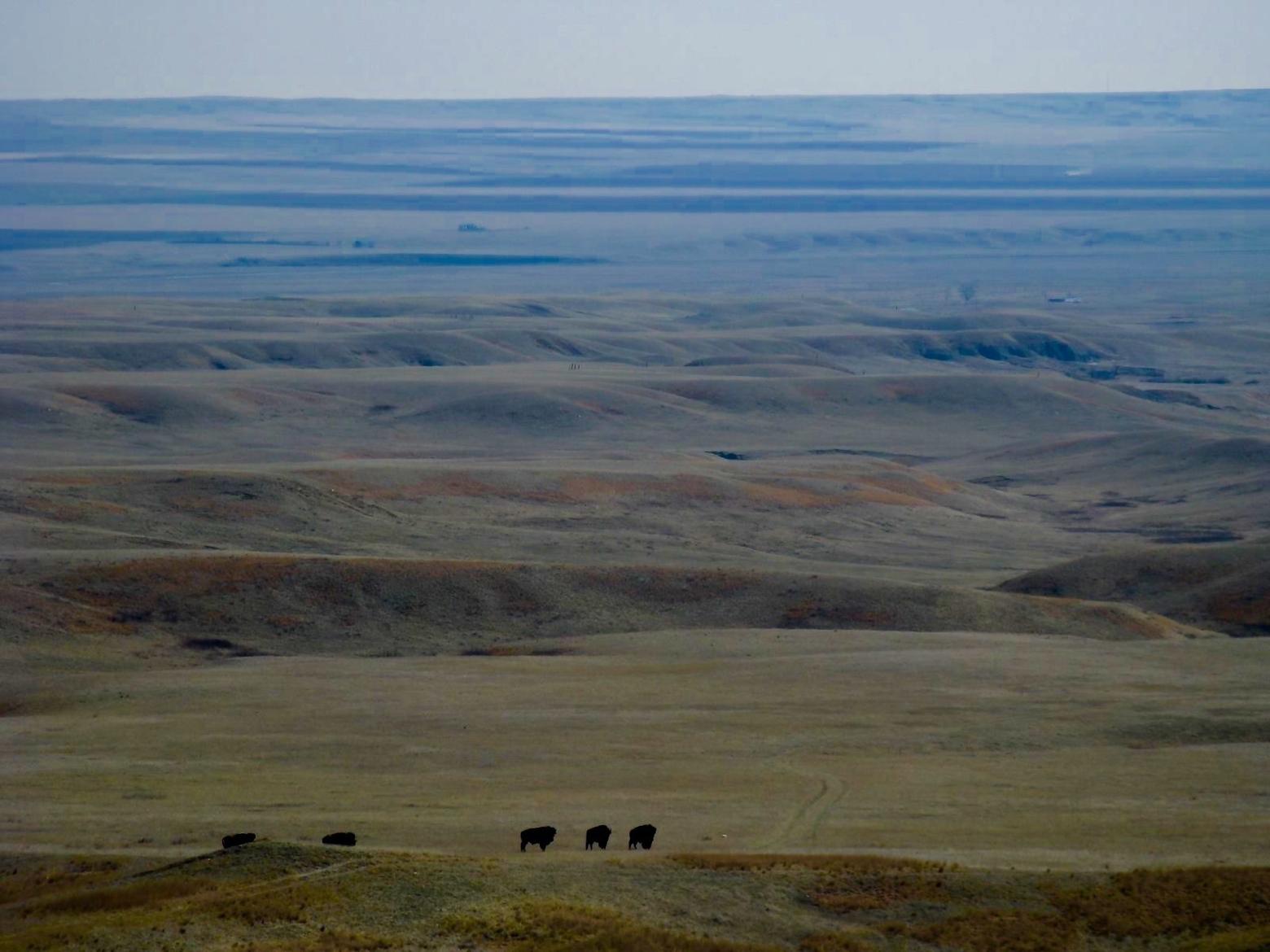 "Fort Peck," Lois Red Elk writes, "my rez and our buffalo." Photo courtesy Lois Red Elk
Before the immigrants came, speaking their foreign languages, bringing with them unwanted violence and menace justified by a religion and values that seemed strange to them, Lois Red Elk's ancestors were eating wild rice and walleye and venison and pemican this time of year in the North Woods and tall grass prairie of the western Midwest. In the summer, they would move onto the plains and join their cousins on buffalo hunts, sharing an affinity that transcended everything.
It was the old home land.
"My first memory of language was hearing my grandmother’s Hunkpapa stories.  Such a joy to have that rich experience. As I grew up other languages became integral parts of my being. My mother spoke Dakota/Lakota, Assiniboine, French, English, some Latin and some Anishinaabe," Red Elk shares. "I enjoyed watching mother listen to the French/Canadian radio coming from Regina, Saskatchewan.  Her joy.  My role with language is to understand the depth of human nature and being conveyed in my language. I share two poems for you to translate for your understanding."
In the works that follow, the distinguished Dakota/Lakota poet serves as translator, sharing with us how an indigenous guide might, in her or his own native tongue and dialect explain the details of a modern roadtrip. Enjoy the piece, "Trespassing in English." 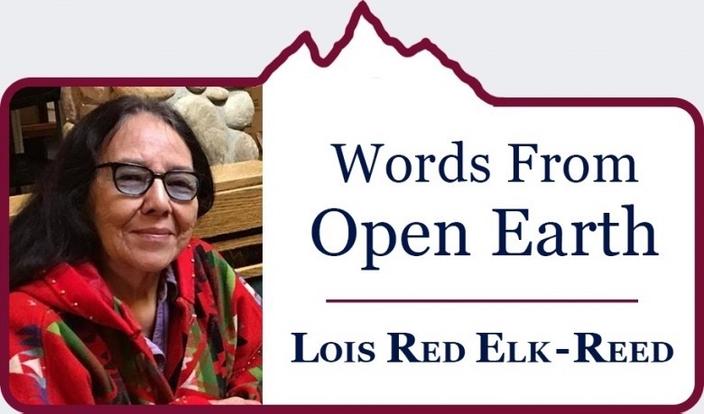 With the brand new work that follows it, she pays homage to the late great
Ella Cara Deloria, aunt of the theologian, historian, lawyer, activist, professor and author Vine Deloria Jr., who wrote the acclaimed 1969 book, Custer Died For Your Sins: An Indian Manifesto.
Ella's given name was Aŋpétu Wašté Wiŋ (translation: "Beautiful Day Woman").  Deloria (January 31, 1889 – February 12, 1971) was a widely-respected linguist, educator, anthropologist, ethnographer and novelist who wrote the book, Waterlily, published posthumously and several others as well as magazine stories. "Ella wrote about the Dakota language and hundreds of stories in Dakota with translations," Lois says.
Like Red Elk, Deloria has a fascinating background and she played a crucial role in helping to save Dakota language by moving it from spoken word onto the permanent written page. With connotation and attachment to the places of their origins, however, words lose meaning and must be put into practice besides just being spoken.
Deloria noted time and again that her own language, culture and worldviews did not need outside validation by those who came to North America. It was as special, sophisticated, poetic and insightful as any other on Earth and she believed it was the same for every tribe and language on the continent.
Nothing is simple but there is a grounding in knowing where you came from, and how original words are super-loaded with the essential meaning of existence.  In her poem, "I've Been Reading Deloria," Red Elk riffs on Deloria's wisdom that culture is carried forward in the survival of language. Read her pieces first by paying attention to the stories then again and again gleaning their broader allusions. —MoJo Editors
By Lois Red Elk
TRESPASSING IN ENGLISH
Told you were wicistinma (sleeping), a dormant form
just now giving up your hibernation.  Wetu (Spring)
started without you.  Mahpiya (a cloud) squeezed rain
over your roof and hurried past that West Coast
hanyetuwi (moon). Inside your humble tipi (home),
a television announcer exchanges and bargains in English –
a solid drone of wasicu (white…) noise encroaching on
your canku (path) to dreaming in Dakota (Sioux).  I hear
your partner try to wake you. “You’re wanted,” (on the
phone),  “They need you,” (to pick up), words traveling
through veins of another kind, rushing along Highway 2,
across tin’ta (the prairie) at the speed of light into the
receiving end of my waiting makamibe (world).  Inside
my receiver that local train, switching through your
otonwahe (town or village) is heard in Montana.  It
breaks a short whistle (short of me hanging up).  I place
myself in your taku o’ksan un (environment), see an
uneasy pose, blinking at the waiting anpetuwi (sun),
head hanging off the edge (of the bed).  An extremity
flinches like you trying to stop a fall, or you taking flight –
a late rendezvous with muscles trying to let go (of sleep),
then giving in to waking (in English).  You open your
eyes, wonder why it’s wikawankap’u (around seven or
eight a.m.), wonder who is calling so early?  It is just your
koda (friend) and spring in kicieconpi (competition) with
the t.v., and that train, trespassing your space in English.
© Lois Red Elk
° "Trespassing in English" is included in the volume, Our Blood Remembers, 2011, Many Voices Press, Kalispell, Montana, 59901 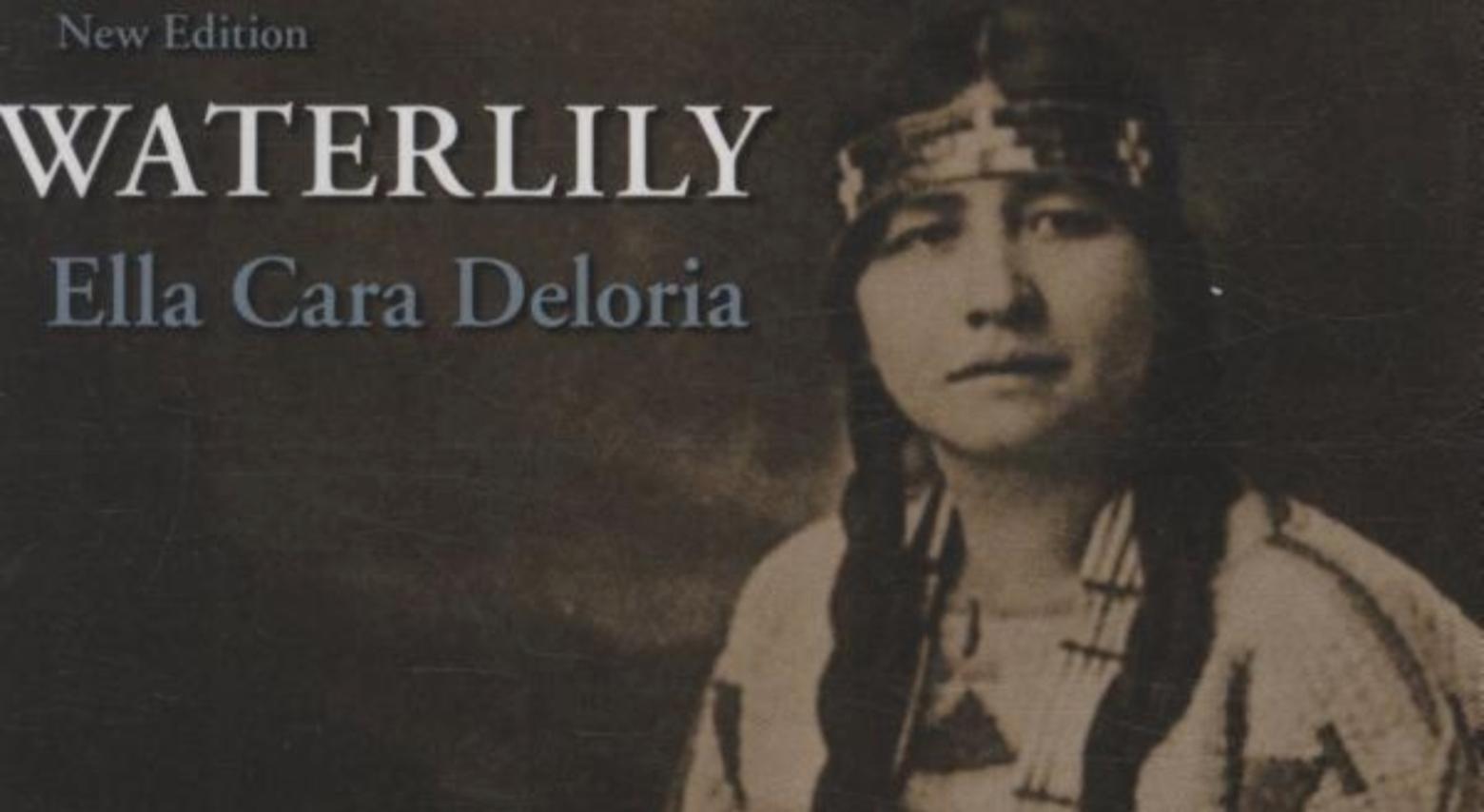 The cover of Ellen Cara Deloria's posthumously-published book, Waterlily.
I'VE BEEN READING DELORIA
I’ve been reading Deloria’s Dakota Text lately in
a necessary but nihinciya (nervous) move away from
reading, writing, hearing and speaking English.
This constant breathing in English has made my
brain aogin (dimmed), me in limbo with head pain.
I’ve been missing the words and sounds of my
mother and her sister speak Isanti the Wahpe Kute,
of living by the knife and shooting among leaves.
The colorful verbs I experienced and the denoting
root words growing from earth that energize my
balance, my existing in space.  It puts my thinking
back in wogligleya (a pattern), where sounds and
meaning exact the honest perspective of the here
and now, the language of my childhood, where life
happening at the moment is exclaimed as part of
the natural order where life will return in circles
lifting me to the age which includes grandmother
earth, seasons, plants, wamakaska (beings of the
earth-animals) elements of air referred to as kin,
as family beings. This is the living earth language
I miss, where all our senses are exacted and
accepted with and among animal/plant tongues.
When did such a separation from affinity seduce
me to accept English as my wokunze, a standard,
without me questioning the loss?  Where in the
process of my wouspe (learning) did a book collide
with how I learned and I never knowing the actual
experience?  Hicena, I will find that continuance
state with Deloria for a while, as a refreshing drink
of water and remember our place is forever.

In The Winter Of Life, Dreams Prepare Us For What May Come
Getting old need not be a season of dread. As Timothy Tate says, it can be an opportunity to embrace who...
Read
Community, Community Change, Conservation, Grand Teton National Park, Jackson Hole, Media, The New West

How A Gutsy Newspaper Helped Save The Natural Essence Of Jackson Hole
Grand Teton National Park, as we know it today, might not exist were it nor for truth-demanding media battling against real...
Read
Culture, Public Lands, Wildlife

Poems About Mato And The Power Of Bear Medicine
Perfect for the approaching solstice, MoJo Poet In Residence Lois Red Elk shares two works about how a great nation and a...
Read
Back to home