Salmon: A Debate Over Dams And The Cause Of A Great Fish's Decline

Pacific Northwest salmon populations are collapsing. What is the best way to resuscitate them? Two experts debate. 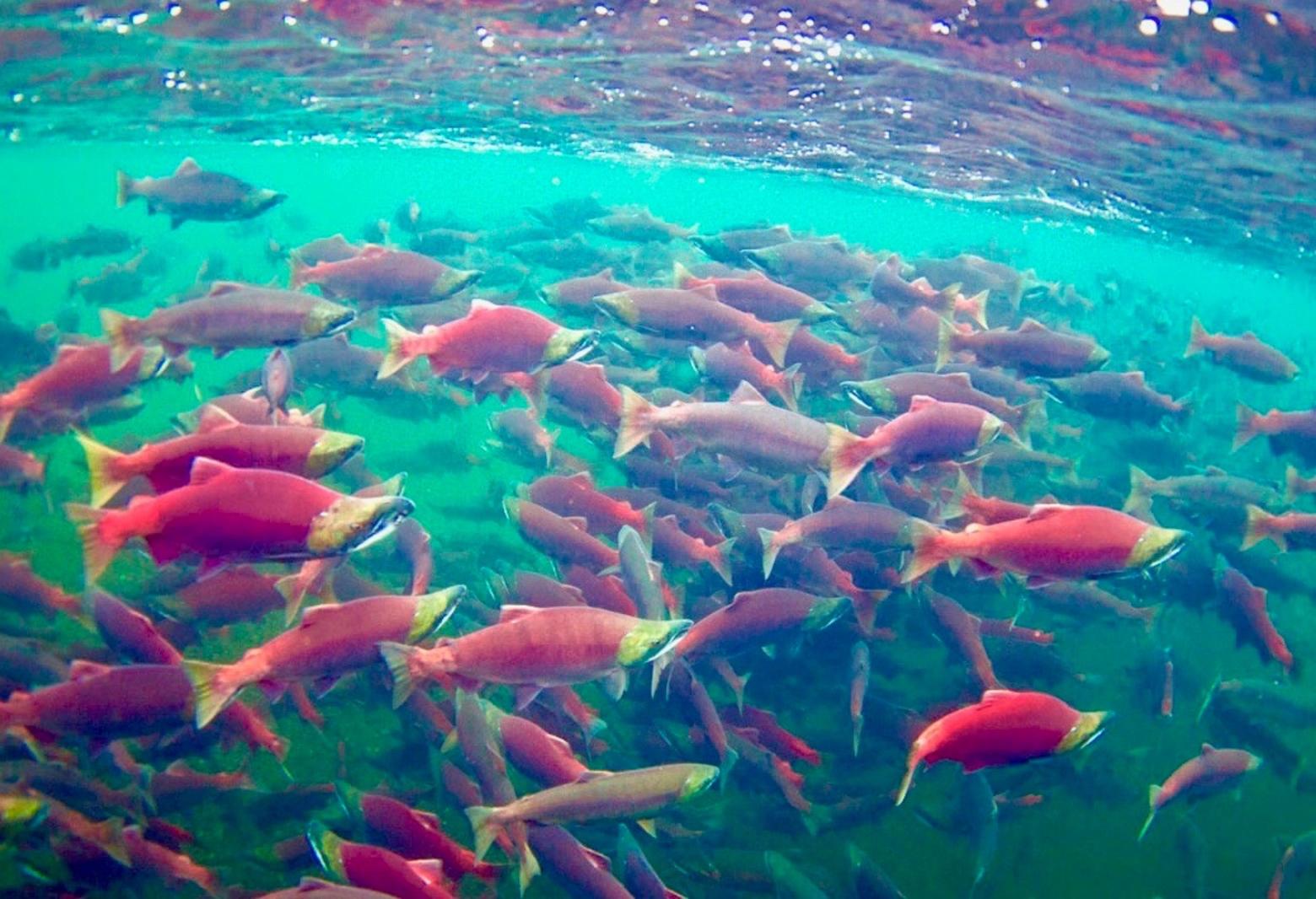 Image courtesy Pat Clayton (fisheyeguyphotography.com)
A NOTE FROM MOJO
Right before our eyes, wild salmon populations along the Pacific Coast of North America are crashing. It's no different in many ways from the stunning historic human-caused decimation of plains bison. As fodder for your consideration, dear reader, see the debate, below, between two different experts.
While there are many causes for the downward plight of salmon, including warming oceans from climate change, predation from sea lions and other factors, no one disputes that the most monumental catalyst for many salmon declines was the construction of dams on the lower Snake and Columbia rivers systems.
Did you know that both of these great rivers have headwaters in the Greater Yellowstone Ecosystem?
This is not merely a binary clash of economy vs. ecology. It is about broader human values, our place in the environment and moral/ethical questions surrounding whether we are willing to let important species go extinct.
Just as it is well-known that there are causes and effects between human activity and the health of Greater Yellowstone's unparalleled concentration of terrestrial wildlife, so, too, is it recognized with the importance of salmon. These anadromous fish (which live their lives in the ocean yet spawn in freshwater rivers and streams) were the foundation for indigenous sustenance and culture, a vital food source for species ranging from Orcas (killer whales) to bald eagles, ospreys, seals and sea lions, sea otters, bears, dozens of fish and more. Even trees located along rivers with healthy salmon runs grew bigger.
Dams also offer a parallel for thinking about how development on a landscape like Greater Yellowstone can create obstructions that impede migrations of elk, pronghorn and deer.
Not long ago, Mountain Journal friend Jim Robbins, a western correspondent for The New York Times, wrote a story for that newspaper,  "How Long Before These Salmon Are Gone? ‘Maybe 20 Years.’"  It was subtitled "Warming waters and a series of dams are making the grueling migration of the Chinook salmon even more deadly — and threatening dozens of other species."
This story set off a good civil written exchange in the Idaho Statesman newspaper between  between Kurt Miller of the organization Northwest River Partners, which is a hydropower advocate, and Dr. Helen Neville, a senior scientist with Trout Unlimited.  With the permission of both, we are sharing their responses to Robbins' piece below.  —Mountain Journal eds 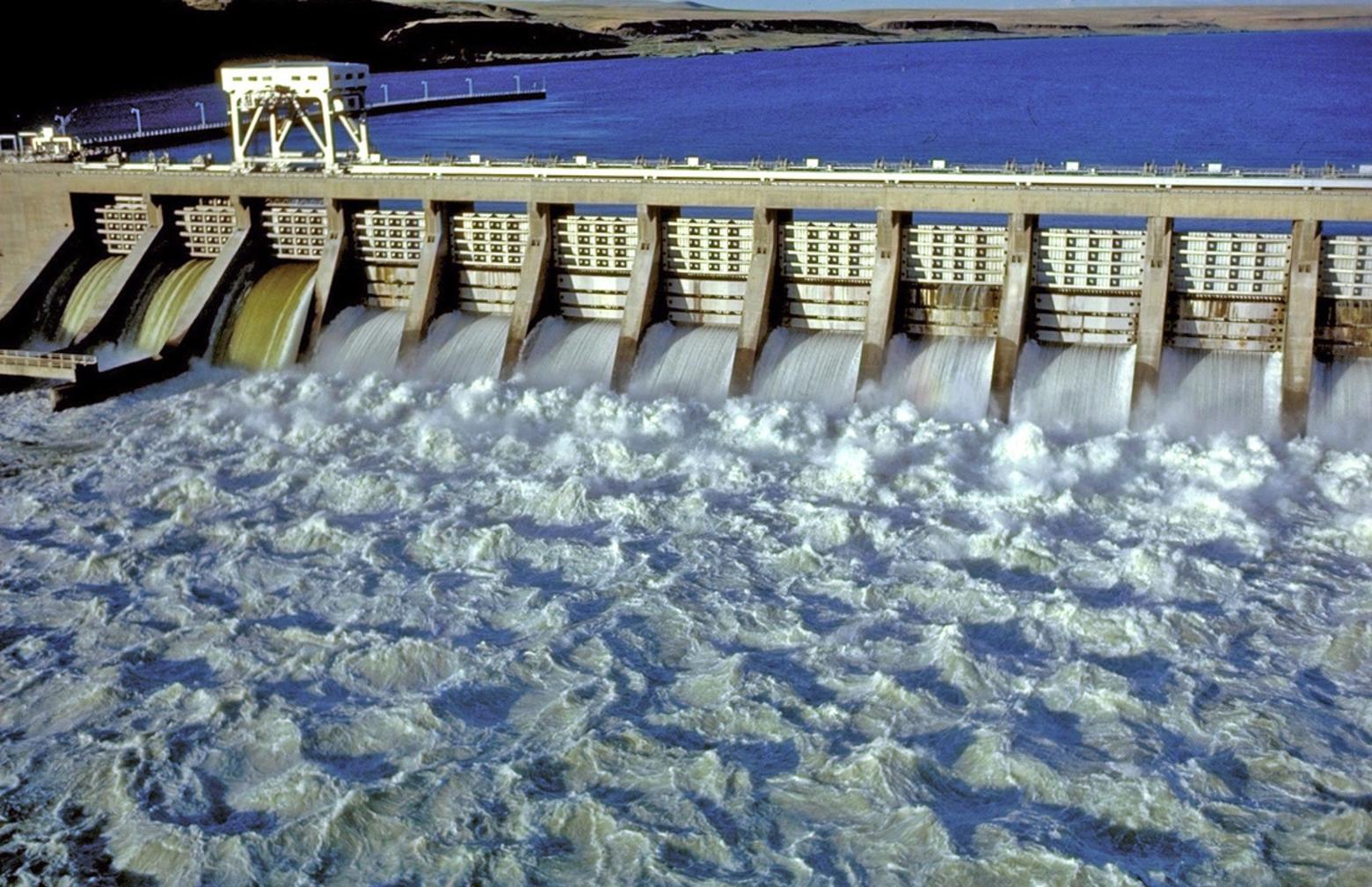 Photo of dam on the lower Snake River courtesy Northwest River Partners
Get Rid Of Dams To Save Salmon? Not So Fast
by Kurt Miller
Make no mistake, wild Chinook are in trouble.
They’re not alone either. As a whole, salmon and steelhead are struggling, and historically speaking, they have been for a long time. Recently, The New York Times covered this struggle in an article they published entitled, “How long before wild Chinook salmon are gone? ‘Maybe 20 Years.’”
Indeed, the concerns over the future of wild Chinook and other salmon is valid. This is especially the case for populations that are listed as threatened or endangered, including those in Idaho.
I largely agree with the concerns that Jim Robbins, the author of the article, raises about the future that lies ahead for salmon. However, I am not alone when I say that he is misinformed about the following statement, which serves as the foundation of his article. Mr. Robbins writes,
“Before the 20th century, some 10 million to 16 million adult salmon and steelhead trout are thought to have returned annually to the Columbia River system. The current return of wild fish is 2 percent of that, by some estimates.
While farming, logging and especially the commercial harvest of salmon in the early 20th century all took a toll, the single greatest impact on wild fish comes from eight large dams — four on the Columbia and four on the Snake River, a major tributary.”
This statement gives the impression that the dams on the lower Columbia and lower Snake rivers are primarily responsible for the decline of adult salmon returns in the Columbia River Basin.

This statement gives the impression that the dams on the lower Columbia and lower Snake rivers are primarily responsible for the decline of adult salmon returns in the Columbia River Basin.

There is actually very little debate in the region about the fact that salmon populations were already largely decimated due to the commercial harvest that occurred well before Bonneville dam was completed in 1938.
Articles in local newspapers, including The Oregonian in 1882, describe the overfishing that took place and how it drove salmon populations to near extinction.
Since the completion of Bonneville dam, salmon returns have improved from the mere few hundred thousand annually to over 2 million in 2014, before tapering off in the last several years.
The declines observed since 2014 perfectly mirror degrading ocean conditions as a result of a massive marine heatwave that began that year and lasted for over three years.
Mr. Robbins also acknowledges the threat of poor ocean conditions, but also states that, “those who want to keep the dams point to changing ocean conditions as a major factor in the decline of the salmon.” This implies that ocean conditions are a talking point rather than a legitimate issue.
There is, however, a wealth of science that has consistently shown a direct tie between ocean temperatures and the number of returning adult salmon. The higher the temperature, the worse the runs will be.
Warming temperatures in oceans and rivers as a result of climate change and human activity have raised the acidity of the water, decreased oxygen levels, and reduced the availability of critical prey for salmon.
A recently released special report by the Intergovernmental Panel on Climate Change states that, “the ocean has taken up more than 90% of the excess heat in the climate system,” and warns of the impacts this has on the abundance of marine life and fish populations, especially in coastal areas.
Should this trend continue, and the temperatures continue to rise, salmon indeed certainly face an uncertain future.
The idea of pulling out renewable resources, like the lower Snake River dams, threatens to only worsen the severity of climate impacts. The calls for dam breaching also ignore the fact that the dams help us add other renewable resources.

The idea of pulling out renewable resources, like the lower Snake River dams, threatens to only worsen the severity of climate impacts. The calls for dam breaching also ignore the fact that the dams help us add other renewable resources.

Solar and wind are very important as we fight our contribution to climate change, but they are intermittent. Hydroelectric dams are essential because they can quickly “turn on and off” to help balance the grid.
Simply put, hydropower partners with solar and wind to provide a consistent power supply in a completely carbon-free way. When we discuss the place of the lower Snake River dams, we need to look at these issues holistically. An oceanwide problem requires a solution that addresses the ocean and a climate problem requires a climate-based solution.
Ultimately, I believe in science-based solutions for salmon, and like Mr. Robbins, I am deeply concerned about the future for wild Chinook and other salmonids. I am also concerned that while the fight continues over the dams, we are ignoring the real threat to the future of salmon in the Columbia River Basin and the entire North Pacific Coast. Our time to act is running out.
Kurt Miller is executive director of Northwest River Partners. 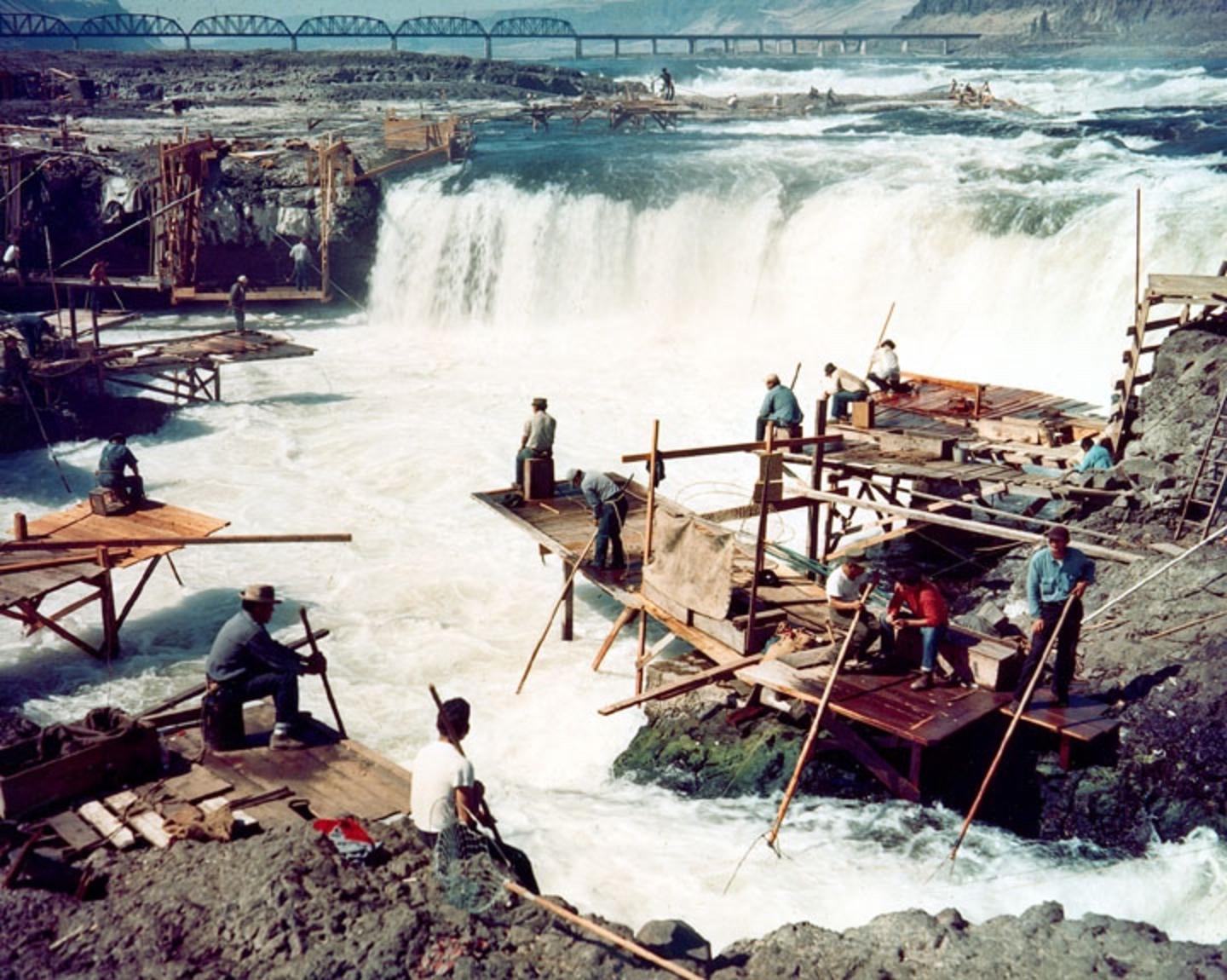 Indigenous people dipnet fishing for salmon at the Cul-De-Sac of Celilo Falls on the Columbia River in the mid 1950s, just prior to completion of the dam known as The Dallas. The resulting reservoir submerged the falls and the dam blocked fish passage. Evidence shows that native people converged upon Celilo going back 15,000 years. in 1805, Lewis & Clark in their journals noted the huge gathering of people there to harvest fish, observing it was the largest they had seen on their journey. Photo courtesy US Army Corps of Engineers.
Rebuttal:
Removing Lower Snake River Dams Is Best Chance
For Salmon and Steelhead Recovery
By Helen Neville
In his recent op-ed, Kurt Miller, the executive director of Northwest River Partners, an association of businesses that supports retention of the federal dams on the Columbia and Snake rivers, argued against removing the four lower Snake River dams to save gravely imperiled salmon and steelhead in the Snake River Basin.
To support his case, Mr. Miller spliced together several pieces of information — some accurate, some not — that ultimately didn’t support his conclusion.
Mr. Miller argued historical commercial over-fishing was the primary culprit behind declines in the Columbia and Snake rivers. He was correct that unregulated commercial fishing caused severe declines in the late 1800s and early 1900s. But as agencies regulated harvest, stocks responded and remained relatively robust, even as the lower Columbia River dams were built. In fact, the precipitous declines in wild Snake River salmon directly mirrored the timing of the completion of the lower Snake River dams.
Mr. Miller also noted that salmon and steelhead declines track recent ocean conditions. The ocean is an important driver of salmon abundance and has been for millions of years.
Luckily, salmon and steelhead have developed remarkable life histories that lend resiliency in a highly dynamic freshwater and ocean environment – until the last five decades, when Snake River stocks seemingly approached the limits of their resiliency (in contrast, stocks in tributaries below the Snake River dams have 2 to 4 times the adults returning from a given cohort of smolts, despite using the same ocean).
After more than $16 billion invested to ameliorate the effects of the Columbia Basin hydro system on fish and wildlife, Snake River spring/summer chinook and steelhead are at record low abundances, and sockeye are barely hanging on. Climate change increases the urgency to restore passage.

After more than $16 billion invested to ameliorate the effects of the Columbia Basin hydro system on fish and wildlife, Snake River spring/summer chinook and steelhead are at record low abundances, and sockeye are barely hanging on. Climate change increases the urgency to restore passage.

How many fish do we need to achieve abundant, resilient, fishable levels? A diverse group of stakeholders from across the region, including Trout Unlimited and several members of Northwest River Partners — Mr. Miller’s organization — worked collaboratively over several years to come up with the answer.
The group, known as the Columbia Basin Partnership, agreed that for spring/summer chinook salmon, 124,000 naturally reproducing adults in the Snake system would be an appropriate recovery goal.
For steelhead, the recovery goal was set at 104,000 naturally reproducing adults. And according to the Columbia Basin Partnership, the Snake has, by a long shot, the greatest production potential for spring/summer chinook and steelhead.
How do we meet these collaborative goals for wild, naturally producing Snake River spring/summer chinook and steelhead and sustain them through fluctuating ocean conditions and a warming climate?
Mr. Miller says he supports science-based decision-making, so I ask him to join me in looking at the overwhelming scientific evidence that we need a free-flowing lower Snake River. Multiple collaborative, peer-reviewed, high-integrity scientific assessments that have included tribal, federal, university, consultant and state agency (including Idaho) scientists, have come to this conclusion.
As a science-based organization, this is why we support removal of the lower Snake dams as the best way to give these fish a chance.