Hunters reject non-native species, even if they are wild, but why not all anglers when it comes to fish? Trout conservationist Bob Mallard dives into the issue 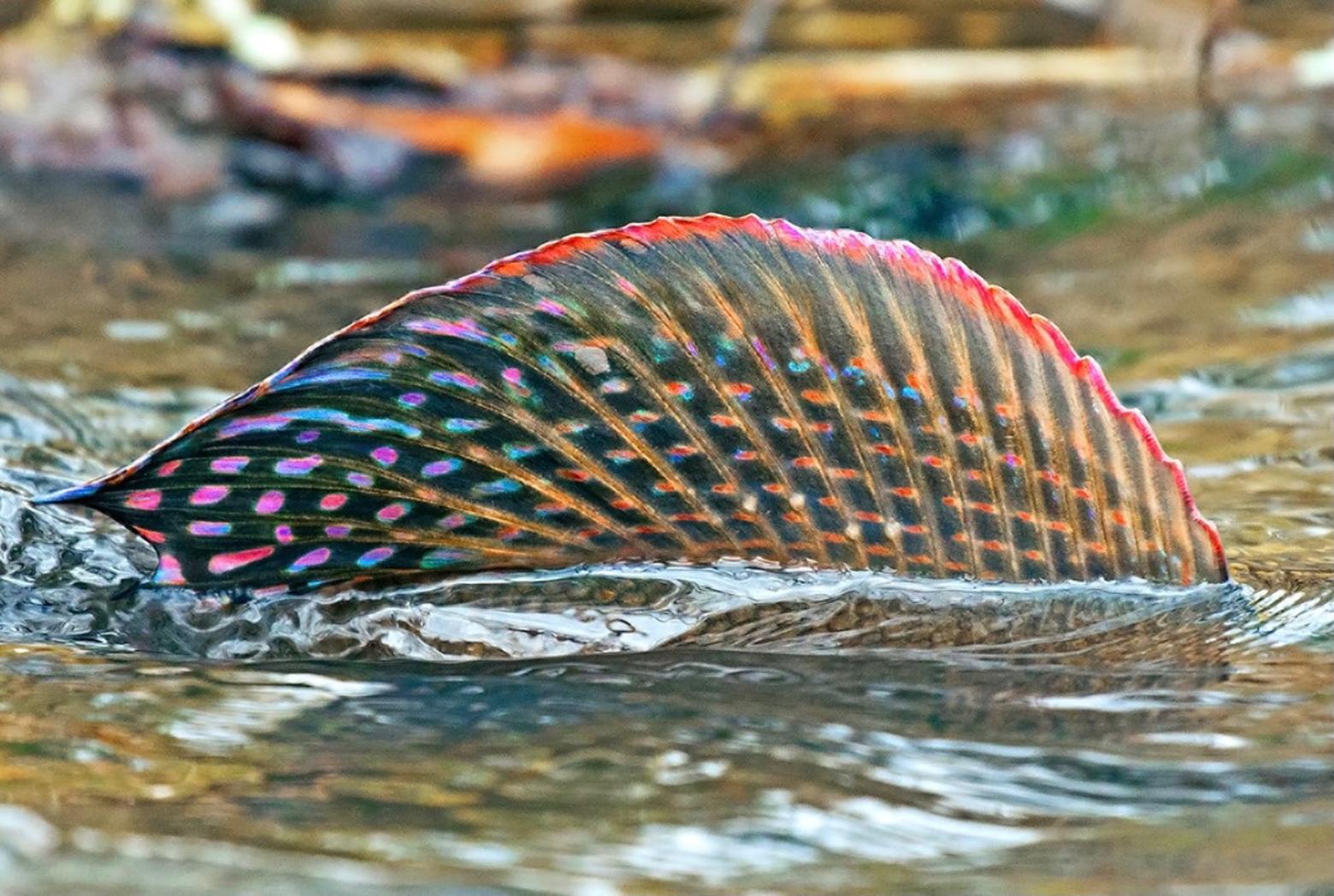 Why do we want wild healthy fish populations to exist? Is it only to please us, so we can catch or eat them, or generate income? Or do we also see native fish, natural expressions of place, as part of the character of our landscapes and river systems perfected across millennia? Photo courtesy Pat Clayton. To see more of his collectible, decorative fish photography, go to fisheyeguyphotography.com
EDITOR'S NOTE: How would hunters in the West respond if the region's populations of native elk, mule deer and pronghorn had to deal with introductions of free-ranging, non-native red deer, hogs and emus? We know what the reaction would be? Why are anglers more divided when it comes to thinking about non-native trout and other species in their waterways?
by Bob Mallard
While much of our emphasis is on habitat, nonnative fish are arguably the biggest threat to our native trout today. When you consider state-sponsored introductions — stocking and transfers, including trout; and private stocking, often organization-sponsored; and the in-migration of stocked fish from a secondary source; and angler-initiated “bucket-biology,” and nonnative minnows resulting from the illegal and legal use of live fish as bait—it’s likely nothing even comes close.
Unlike habitat degradation which can often be corrected, invasive fish introductions are often irreversible. When they can be reversed, it costs tens and even hundreds of thousands of dollars—often much more— and involves disruptive and controversial chemical reclamation. Worse is that while habitat degradation is usually localized, nonnative fish introductions can negatively impact entire watersheds.

Consider the number of native cutthroat populations, including entire subspecies, lost to nonnative rainbow, brown, and brook trout, as well as other subspecies of cutthroat. Add to this native brook trout populations lost to alien rainbows and browns. And native rainbows compromised by nonnative brown and brook trout. Most of this was the result of federal- and state-sponsored stocking.
Gila and Apache trout, the southernmost native trout in America, succumbed to nonnative rainbow and brown trout introductions. Arctic charr in New Hampshire, Vermont, and Rangeley, Maine, were lost to nonnative lake trout, landlocked salmon, and smelt. Michigan’s grayling were forced out by invasive brown and rainbow trout, as were many grayling populations in the Rocky Mountains.
At the water level, the entire St. John River system in Maine, once the longest wilderness native brook trout river in the country, is now nearly devoid of such as a result of the introduction of highly invasive nonnative muskellunge (muskies). The native trout were lost to the in-migration of fish stocked by the provincial government in neighboring Canada.
The cutthroat of Yellowstone Lake in Yellowstone National Park, arguably the most important lake-resident population of native trout in the nation, was nearly wiped out by alien lake trout. While they are rebounding to some degree due to extensive lake trout eradication efforts, the population will never be what it once was. This was likely the result of a deliberate illegal act perpetrated by anglers who wanted lake trout. 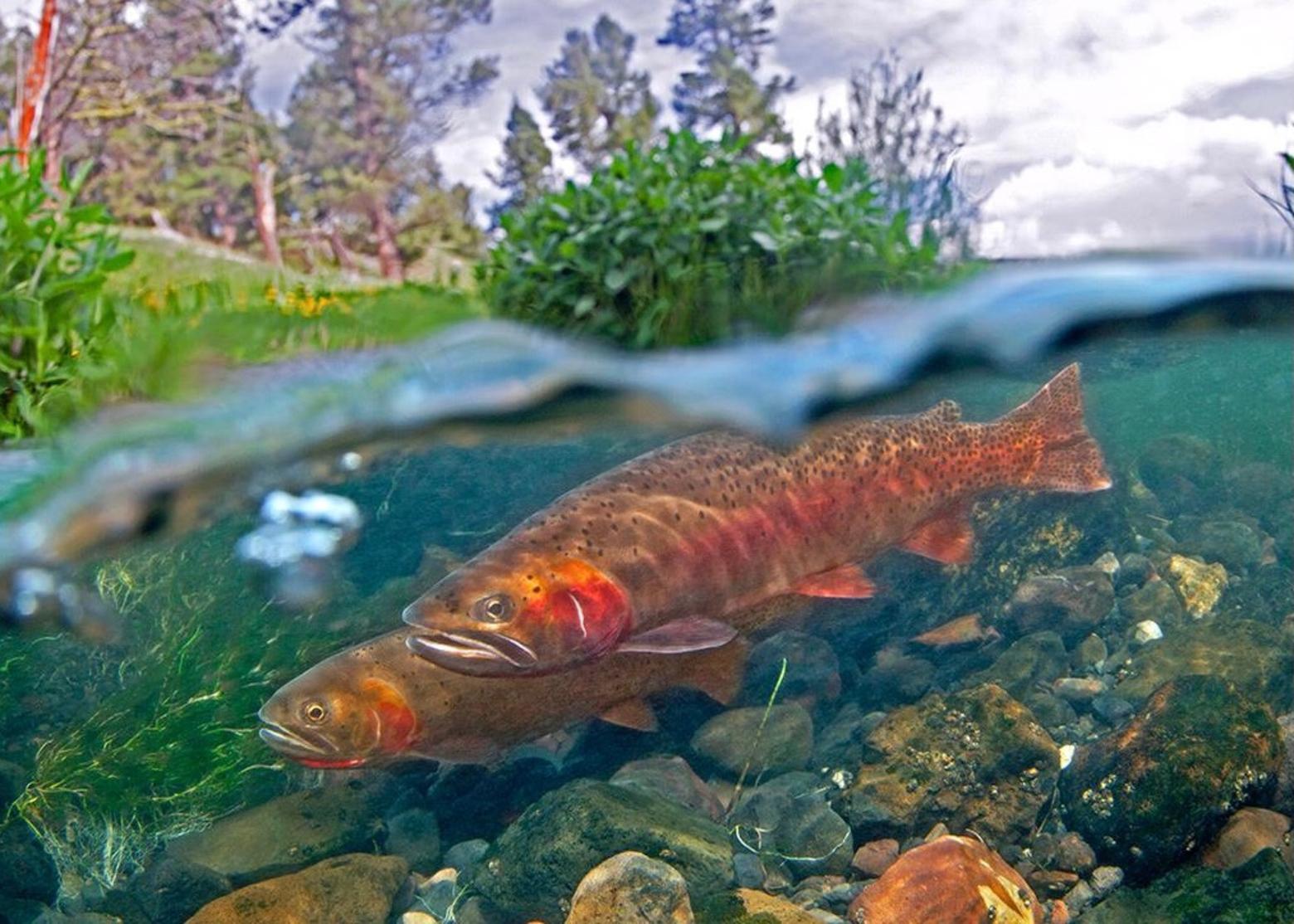 Yellowstone National Park is a fountainhead reservoir for Yellowstone cutthroat trout, famous in the world and a bellwether for the survival of native trout challenged by non-native transplants, habitat loss and rivers affected by climate change. Photo courtesy Pat Clayton (fisheyeguyphotography.com)
The Rapid River in Maine, considered by many the finest native brook trout river in the country, and one of the finest wild native trout rivers in the nation, is now infested with highly invasive smallmouth bass. These invaders got there via an illegal stocking downstream. No river in Maine has survived a bass introduction unscathed, nor will the Rapid.
The fabled streams of the Catskills region of New York, the Beaverkill, Esopus, Neversink, and Willowemoc, known as “the birthplace of American fly fishing,” are now primarily nonnative brown and rainbow trout fisheries, the native brook trout having been pushed out by the more aggressive exotics. The same holds true for much of the Delaware River system.
Native trout have been displaced from much of the Batten Kill in Vermont and the Madison River in Montana, two of the most famous trout rivers in the country. They have been greatly reduced and heavily hybridized in the South Fork of the Snake in Idaho, Shoshone River system in Wyoming, Yellowstone River in Montana, and many other western rivers.

Native trout have been displaced from much of the Madison River in Montana, one of the most famous trout rivers in the country. They have been greatly reduced and heavily hybridized in the South Fork of the Snake in Idaho, Shoshone River system in Wyoming, Yellowstone River in Montana, and many other western rivers.

If nonnative fish are such a threat to our native trout, why are so few talking about it? Why are so few focused on it? And why are we doing so little about it? The answer is simple: We anglers, and I use the term figuratively, like nonnative fish, as do many of those charged with managing our waters. And to make matters worse, we are often the ones moving nonnative fish around.
Challenging nonnative fish is risky. By doing so you are waging war against the angling masses, fishing tackle and hospitality industries, angling and outdoor media, and many state fish and game agencies. It’s a fight where you find far more enemies than allies, and influential ones at that. And it’s a fight that in many cases cannot be won as the damage is already done and often irreversible.
If you need to sell products or services, maintain readership, or attract and retain members to survive, challenging nonnative fish can come with a steep price. It also means challenging the powers that be, state fish and game agencies, as they are often the ones doing it: State-sponsored stocking is one of the biggest sources of nonnative fish introductions.

Challenging nonnative fish is risky. By doing so you are waging war against the angling masses, fishing tackle and hospitality industries, angling and outdoor media, and many state fish and game agencies. It’s a fight where you find far more enemies than allies, and influential ones at that. And it’s a fight that in many cases cannot be won as the damage is already done and often irreversible.

This has caused many advocates and non-profs to look elsewhere for a way to make a difference and provide some level of relief, and habitat work is often where they land. Habitat work has few enemies, unless it involves dam removals, and what enemies it has have even fewer friends. Anglers and state fisheries managers typically support it, or at least ignore it.
Once you enter the habitat game, you can’t afford to get on the bad side of state fish and game as they are the ones who issue you the permits you need to work. Challenge their management decisions in regard to stocking, and you may find yourself on the outside looking in. So, we turn a blind eye and do what we can.
To call the proliferation of nonnative fish an epidemic would be fair. Bass, pike, muskies, walleye, baitfish, and nonnative trout are the primary culprits. We have lost many native trout populations to invasive fish and continue to do so. While it’s slowed down in some areas, in places like Maine it appears to have ramped up.
While we paint the front porch, the back porch is on fire. We continue to improve habitat yet fail to address what lives in it, or more appropriately, what shouldn’t live in it. While well-intended, in some cases, our habitat work opens up previously isolated water to the upstream migration of nonnative fish.
Can we save what is left of our wild native trout? Are we willing to try to regain some of what has been lost where it is feasible to do so? Native trout matter. They take the game to the next level by allowing us to fish for something that belongs where it is found. Wild native trout bring us full-circle, back to where it all started. They reset the table.
ENDNOTE: This article is part of a series published in MidCurrent and sponsored by Swift Fly Fishing. 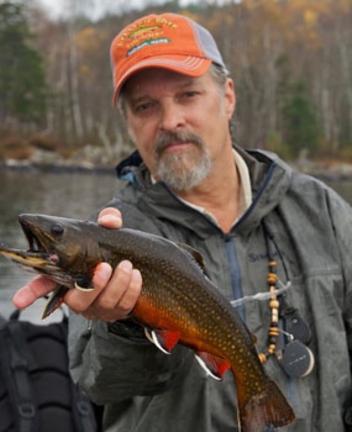