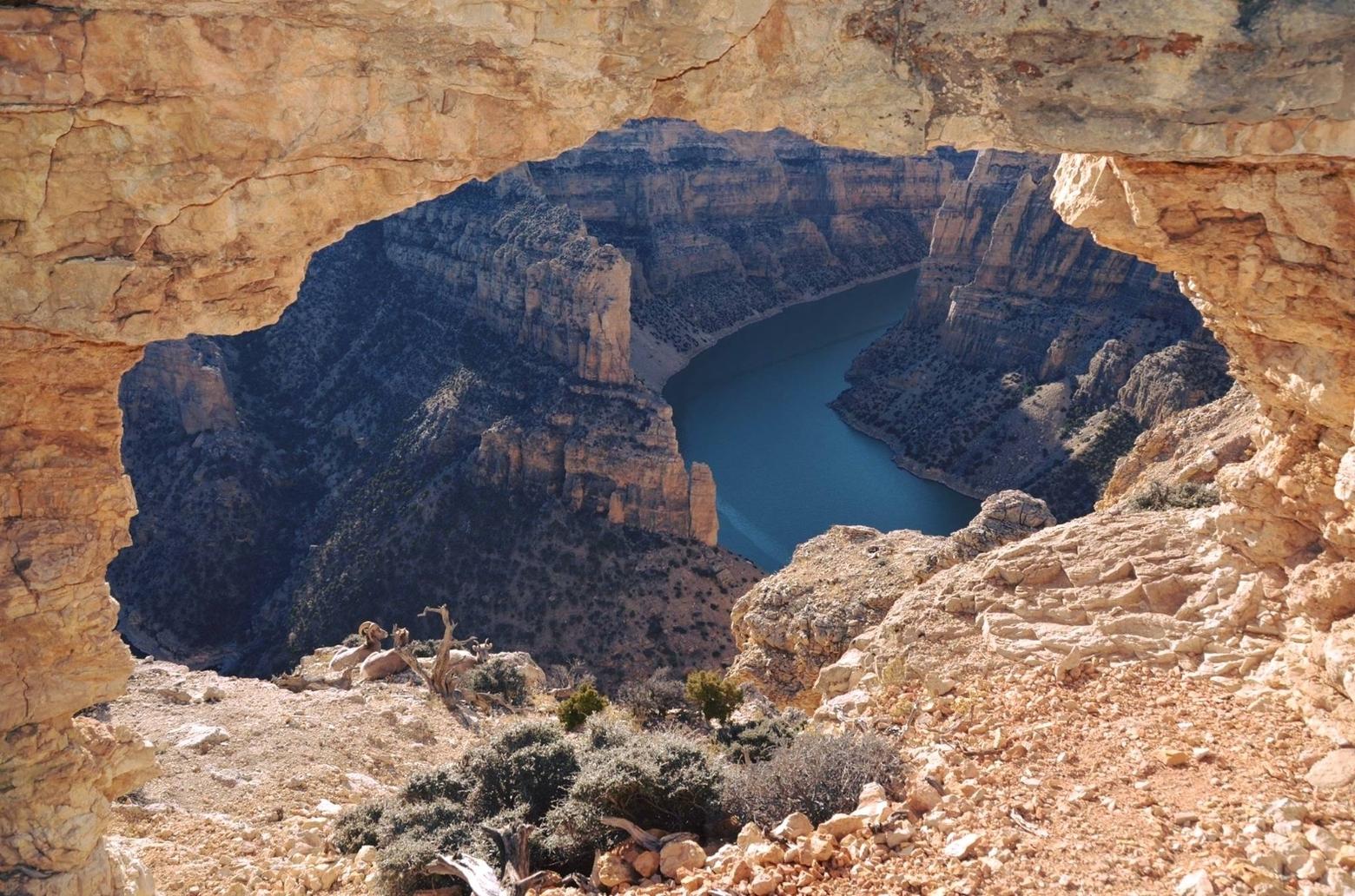 An eroded archway reveals a window into the magical chasm of Bighorn Canyon National Recreation Area located just to the east of the Greater Yellowstone Ecosystem. In many ways they are interconnected—by rivers and wildlife. Photo courtesy Todd Johnson
“Solitude and light.”
Those are the two words that I most often use when describing the special mystique of Bighorn Canyon National Recreation Area.
For just under a year I have spent many early mornings and late evenings experiencing the canyon, from a black bear sow and her two yearlings tussling with one another under a rising sun to two rams cracking horns as they battled for dominance in the waning light of a spring moon.
These extraordinary moments, and so many others, are what make this 120,000-acre gem between the Pryor and Bighorn Mountains so unique and exceptional.
Located on the eastern edge of the Greater Yellowstone Ecosystem and nestled between the blended border of Wyoming and Montana, the park is a mosaic of natural landscapes, ranging from a dry Great Desert Basin and riparian woodlands in the south to Douglas fir and ponderosa forests in the north. 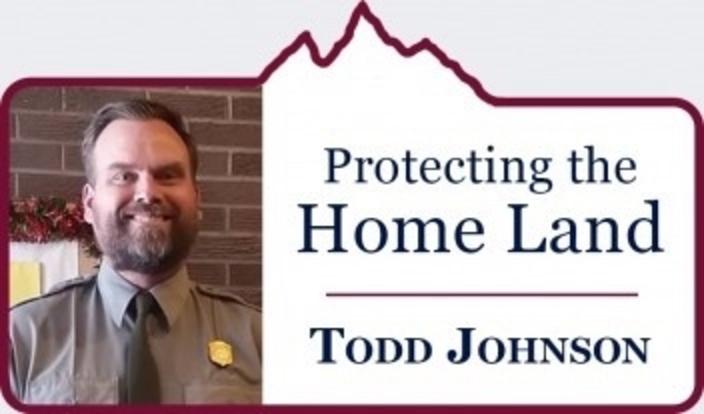 Established by Congress in 1966 as a result of the creation of the Yellowtail Dam, the Bighorn Canyon National Recreation Area is one of only 12 national recreation areas in the country and is easily one of the most overshadowed scenic locations to experience in all of the West.
The canyon is a global phenomenon as visitors from all around the world appreciate the lateritious colored canyon walls that gleam at sunrise and muddy waters that flow from the storied Shoshone and Bighorn Rivers into the lake.
As a result of the dam construction, Bighorn Lake is a 71-mile waterway that serpentines itself around the weathered and steep escarpments that were shaped over millions of years. The lake supports a vast array of fish, including small mouth bass, sauger, catfish, and brown trout, and is also is a popular location for recreational boating, kayaking, and jet-skiing.
As a result of its geography, a plethora of animals and flora flourish in the environment.  Black bears, bighorn sheep, bobcats, cougars, and mustangs from the Pryor Mountain Wild Horse Area roam the terrain while over 230 kinds of birds, including the American bald eagle, peregrine falcon, and great horned owl, are often seen soaring in the skies. 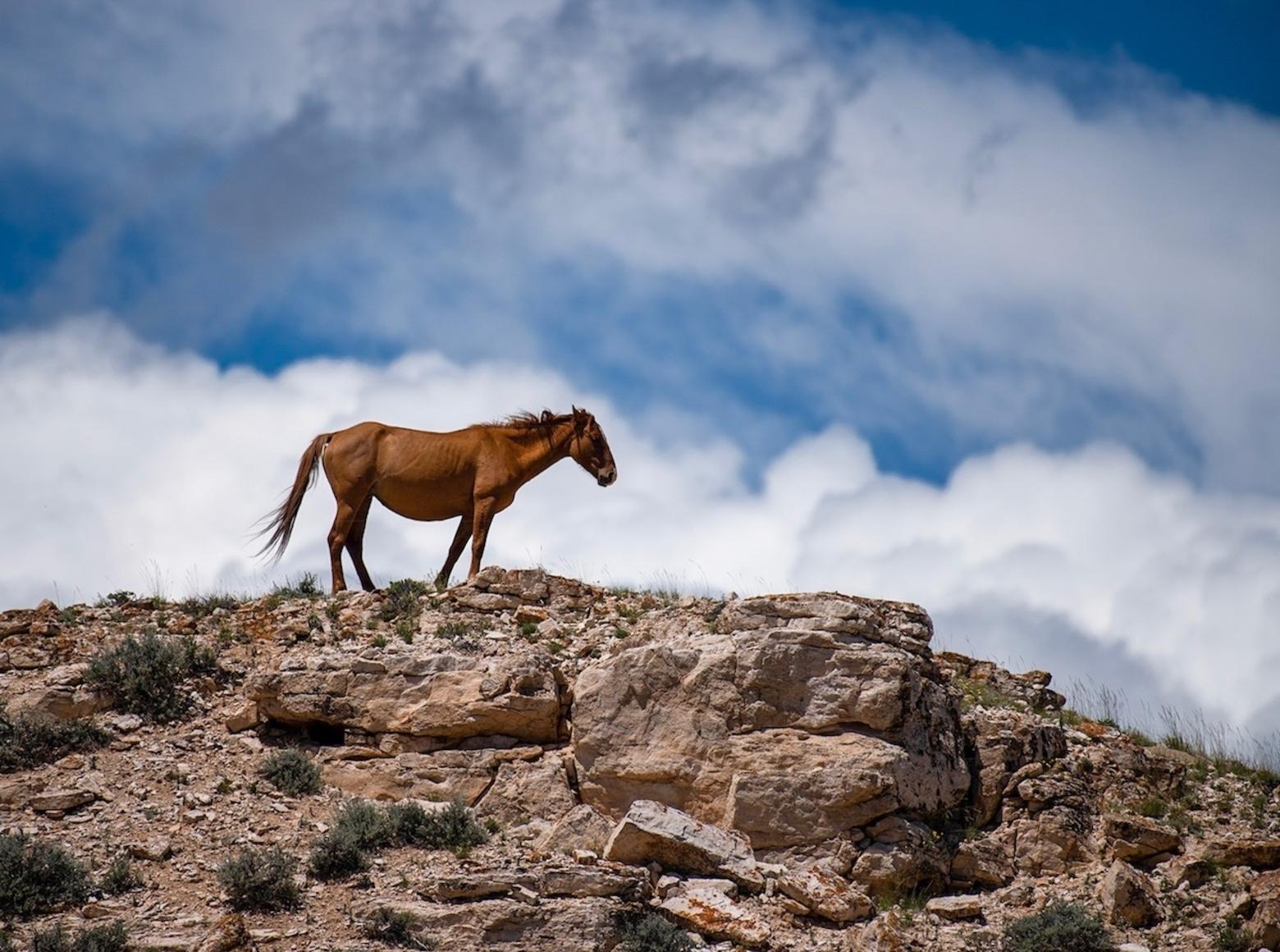 Wild horses roam the flanks of Bighorn Canyon and the Pryor Mountain Wild Horse Area. Photo by David Hunter
While most sightseers are taken by the aesthetic beauty of the Bighorn Canyon, most don’t appreciate the fact that the area has been utilized by people for thousands of years.
The main road into the park, Wyoming 37, transcends the state line. It was once a bison migration route that Native Americans followed for generations. The northern half of the recreation area is surrounded by the Crow Indian Reservation.  Numerous teepee rings, rock cairns and buffalo jumps enable visitors to glean insights into the social and economic dynamics of the diverse tribes that inhabited the area prior to European settlement.
Another unique aspect of the park are the four historical properties that showcase the hardships and successes of cattle ranchers and entrepreneurs during the early 20thcentury.

The most well-known historic ranch is the one that belonged to Caroline Lockhart, known to many during her lifetime as the “Cattle Queen of Montana."

The most well-known is the ranch that belonged to Caroline Lockhart, known to many during her lifetime as the “Cattle Queen of Montana." A prolific fiction writer, former newspaper reporter, and good friend of William F. "Buffalo Bill" Cody, Lockhart grew her ranch to over 6,000 acres and was very successful in her cattle raising pursuits.
However, for most people, the draw to the recreation area will always be the stunning, multifarious vistas and ecosystems that surround them.  As more and more people make their pilgrimage to Yellowstone this year I encourage them to check out the Bighorn Canyon.
Meanwhile, for those in the region, it adds an accent to the wildness they know in Greater Yellowstone.
Not only will they have a synesthetic experience of solitude and light unlike any other, but they will find themselves immersed in a land unlike any other in the National Park System.
EDITOR'S NOTE: Also be sure to read:
MoJo's Interview With Todd Johnson: A Patriot Finds Peace In the West
And From Battlefield To Homefront: A Soldier Becomes A Park Ranger
About Todd Johnson

Todd Johnson is an U.S. Army veteran who served for 22 years, including deployments to Iraq and Afghanistan.  He is a park ranger at the Bighorn Canyon National Recreation Area and enjoys hiking and writing in his spare time.