Up North There's Concern About Skinny Grizzlies And Declining Salmon

Another reminder that all bear foods aren't equal. When you lose one, as has been shown in Greater Yellowstone, it can disorder things at an ecosystem level 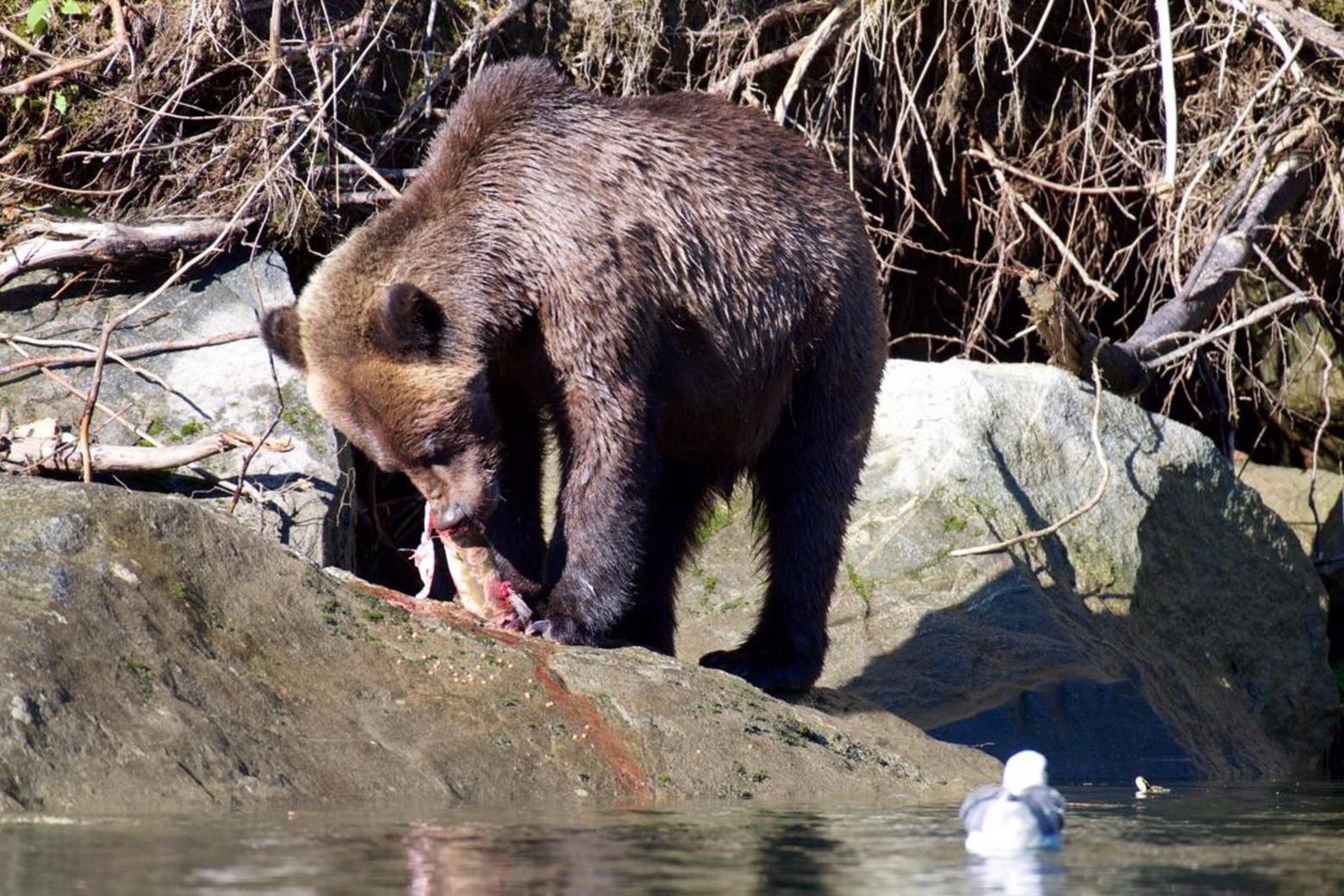 A grizzly along the Pacific Coast in Canada feasting upon spawning salmon. Photo courtesy Dr. Paul C. Paquet
EDITOR'S NOTE: The following opinion piece was written by three well-known wildlife advocates in Canada, Many believe there is a parallel that can be drawn  between salmon populations and coastal grizzlies and declines of whitebark pine trees, Yellowstone cutthroat trout and grizzlies in the Greater Yellowstone Ecosystem.
By Chris Genovali, Misty MacDuffee and Dr. Paul Paquet
The stark recent images of malnourished grizzly bears on the coast of British Columbia, Canada have garnered widespread international media attention.
The photographs are difficult to view and strike a chord of deep concern in most people. Raincoast Conservation Foundation has long advocated for a wildlife welfare ethic when it comes to the conservation and management of large carnivores. This approach becomes even more compelling when the life requisites, in this case wild salmon, of species such as coastal grizzlies are diminished as a result of human activities.
Much of the news coverage associated with the aforementioned situation has been linked to climate change, but this particular salmon run collapse is likely the result of a suite of influences, not the least of which is the failure to protect wild salmon in BC from fishing pressure, habitat degradation, hatchery impacts, fish farms and more.
Wild salmon and grizzly bears have an intertwined relationship and the choices we make are inextricably linked to their fates. When salmon are plentiful in coastal streams, bears thrive and produce more cubs. Grizzlies also occur at higher densities and grow to larger sizes when salmon are abundant. Importantly, when salmon are plentiful, bears eat less of each fish, selecting the nutrient-rich brains and eggs and casting aside the remainder.
These salmon remains then feed other animals, scavengers and fertilize the adjacent streamside zone. Thus, abundant salmon boosts the amount and value of food for bears, as well as transfers more nutrients and energy to other wild consumers.
In contrast, when salmon are scarce, grizzlies produce fewer cubs, if any, and eat more of each individual fish. Less discarded salmon enters the surrounding ecosystem with diminished benefits for other wildlife, plants, and less visible organisms such as fungi, algae, and insects. Commercial salmon fisheries typically extract 50 per cent or more of the salmon bound for rivers, bears and forests.

"...when salmon are scarce, grizzlies produce fewer cubs, if any.
But how are the food needs of these animals considered in fisheries management or the benefits of salmon managed for coastal ecosystems? Bottom line: they aren’t."

When the number of salmon returning to spawn from their ocean migration is variable, fishery managers favour the short-term benefit of harvest, even when salmon abundance is low and even if it means forgoing larger harvests in the future.
Canada's Department of Fisheries and Oceans manages for spawner persistence, not for healthy, abundant spawning runs. Despite the knowledge that many species depend on salmon, humans have never managed fisheries with wildlife in mind. Whether its bears, wolves or whales, many coastal species have evolved to rely on annual returns of Pacific salmon.
But how are the food needs of these animals considered in fisheries management or the benefits of salmon managed for coastal ecosystems?
Bottom line: they aren’t.
Contemporary thinking in conservation science instructs salmon management to include the bears, whales and other wildlife that have an evolutionary reliance on the annual pulse of nutrients and food energy delivered via spawning salmon.
Even Canada’s Wild Salmon Policy recognizes the need for management to transcend salmon ‘production’ alone and consider the needs of terrestrial species. For this policy to be consequential however, it requires fisheries managers to consider bears and other wildlife by lowering catches and allowing more salmon to reach the rivers to spawn.
Currently, humans engage in what ecologists call “exploitative competition,” i.e. we capture salmon en route to spawning grounds before they can reach awaiting carnivores. Even salmon runs that spawn in protected watersheds and parks are subjected to exploitation by commercial fisheries.
Often, these parks were created to protect species such as grizzlies, black bears and wolves. As such, we suspect that grizzly bears now receive a fraction of the salmon they evolved with, which ultimately manifests in population declines through repeated years of low birth rates.
In some areas, we believe it is time to establish truly protected salmon runs – runs that would be managed solely for their importance to wildlife and ecosystems. This would allow salmon to return to spawning grounds without encountering the nets and hooks of the Pacific salmon fleet. And those fish would then spawn in rivers that flow naturally without their watersheds logged, developed or otherwise impaired.
Of course, it is not just fishing nets and hooks that rob wildlife of their energy needs. Degraded freshwater and marine habitat, fish farms and disease, dams and diversions, hatcheries and genetic dilution, climate change and changing ocean conditions, all influence salmon abundance.
Human generated impacts that reduce salmon abundance must be addressed. However, reducing, and in some cases eliminating, exploitation from fisheries would have an immediate, positive effect on coastal wildlife.
FOR FURTHER READING
To learn more about the collapse of the whitebark pine forest in Greater Yellowstone and its effect on grizzly bears, read these differing opinions (click on links) to gain perspective:
How Important is Whitebark Pine to Grizzly Bears? (an overview that appeared in the journal Yellowstone Science written by Cecily M. Costello, Frank T. van Manen, Mark A. Haroldson, Michael R. Ebinger, Steven L. Cain, Kerry A. Gunther, & Dan D. Bjornlie)
The Late Great Whitebark Pine (an essay by Dr. David J. Mattson, former researcher with the Interagency Grizzly Bear Study Team, that appeared in Grizzly Times)
Measuring the impact of a changing climate on threatened Yellowstone grizzly bears (an overview of a study published in the journal PLOS ONE)

In the Rockies, Pines Die and Bears Feel It (a story that appeared in The New York Times featuring the findings of Dr. Jesse Logan, a retired federal researcher and expert on the plight of whitebark pine and other evergreen species from insect outbreaks and diseases.  Dr. Logan is also a Mountain Journal columnist)