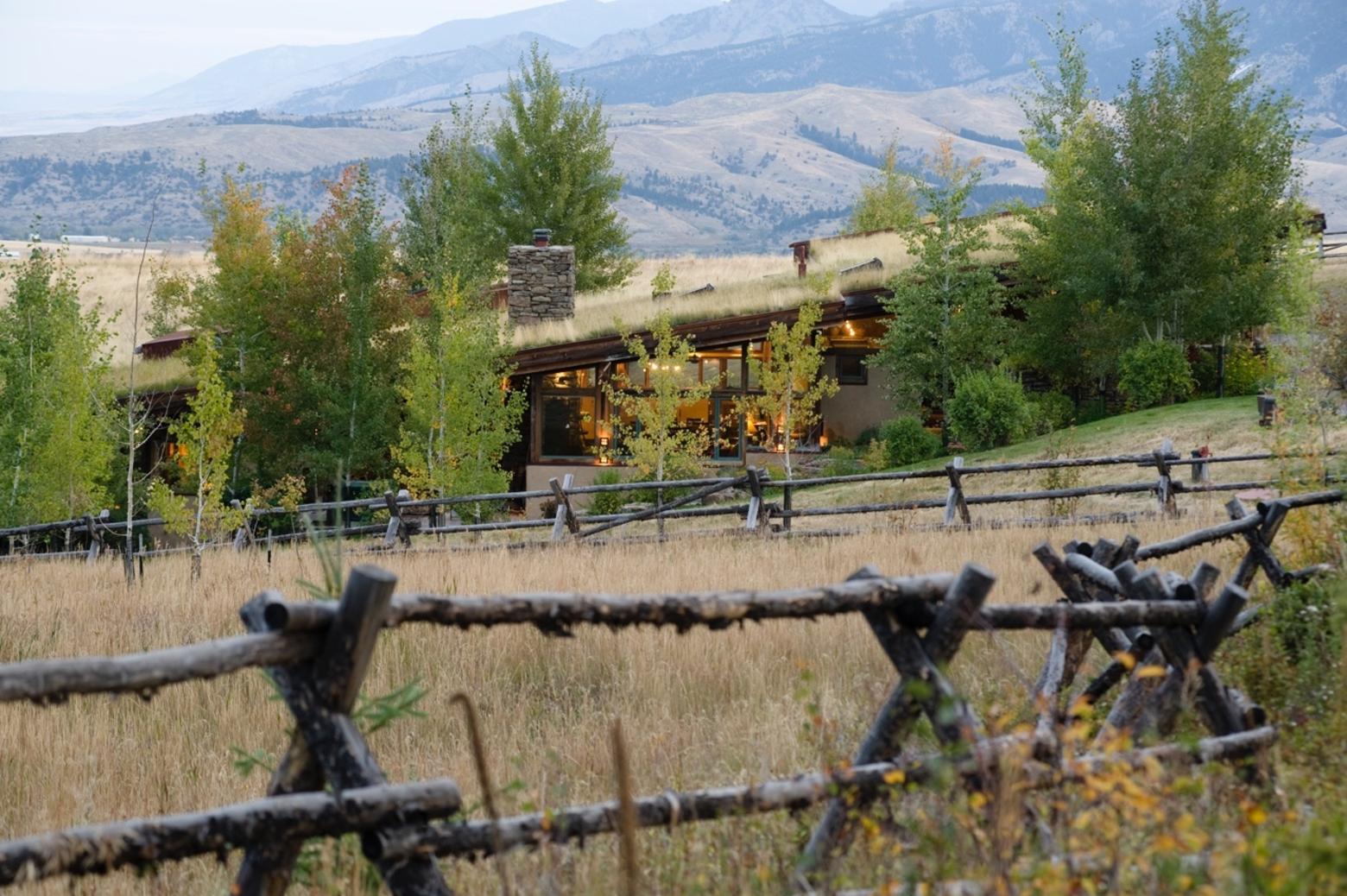 Eagle Rock Sod House in Bozeman designed by Dan Harding and Rich Charlesworth. From the air, it is practically invisible.
I had a dream in which all of the roofs in the Gallatin Valley were covered in grass.
The roofs were all sorts of shapes and pitches. Some were simple planes, others punctuated with skylights or sculptural installations that provided habitat for wildlife. Some had solar panels, water collecting fabrics or small wind turbines. 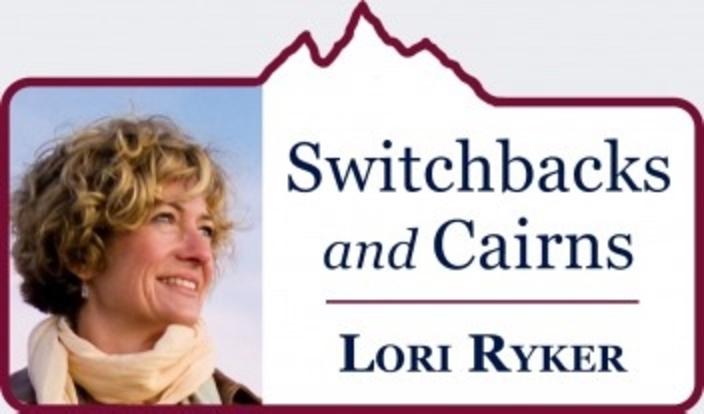 These were not stretches of exotic Kentucky bluegrass, but indigenous grasses. Grasses and the plants that would have been continuous as the expression of the valley before European settlers arrived with the notion of building villages, and towns and cities. Grass that lived in the valley before the settlers brought plows and ox and range cows and chickens, when the plants that grew co-evolved with the bison.


It may sound like a crazy dream. Yet no dragons or unknown beasts or lost loves presented themselves. It was simply a dream of “thousands of acres” of built grass roofs that replaced the ground we removed from the valley floor and that we took from the native peoples, the habitat of the elk and black bear and rabbits, from the songbirds and hawks.


But how crazy is it really, if we are concerned about the health of the ecosystem where we live, about its longevity and continuance long after we are committed to the dirt where we lived? 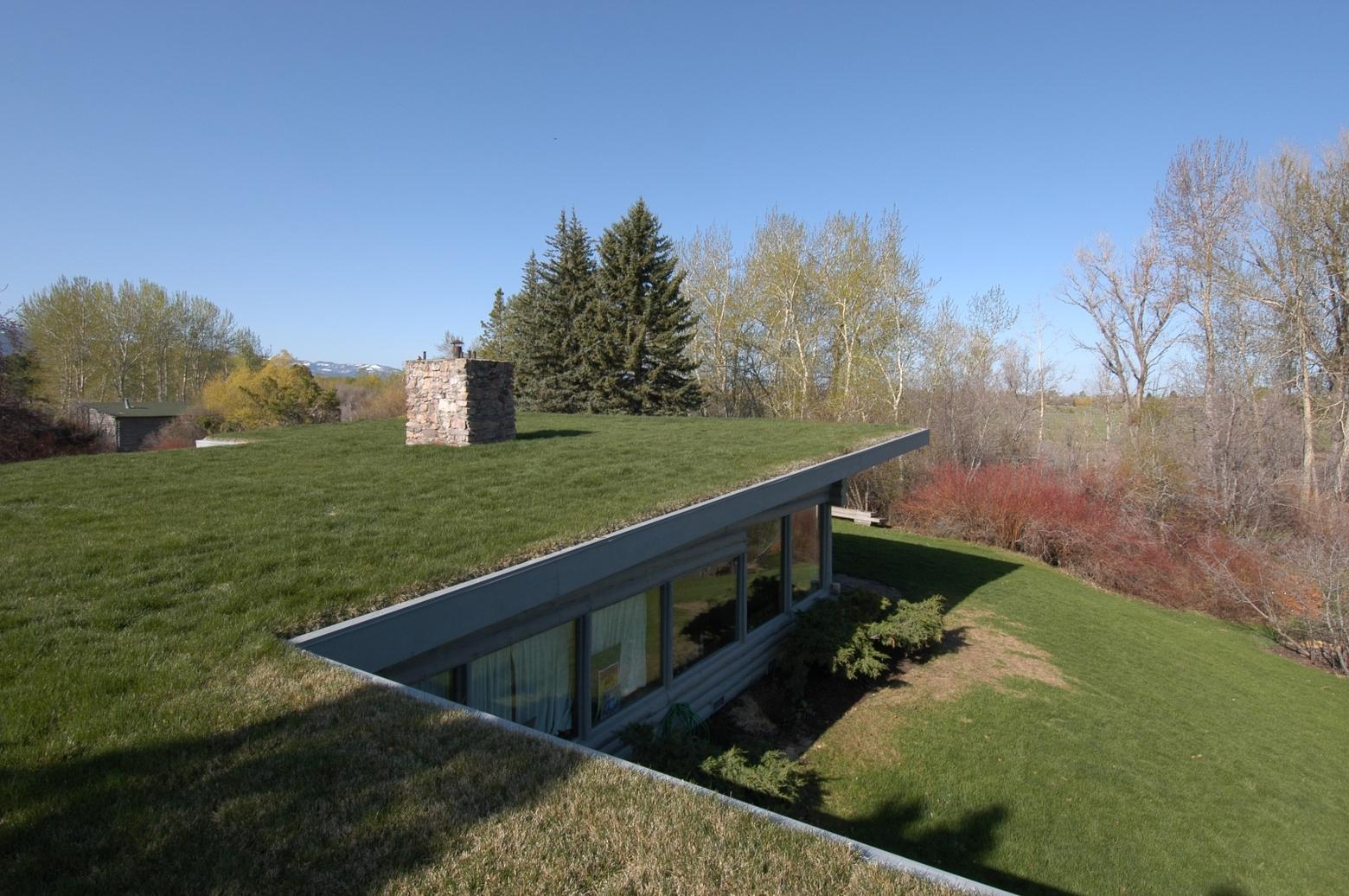 A sod-roofed home designed by architect Richard Neutra. Photo courtesy Joe Valerio
I’m not talking about fictional Hobbit houses in Middle Earth. Once upon a time people on the prairie dwelled in sod houses that were insulated and warm in bitter winter temperatures and cool beneath the hot sun.


We can learn from the past. These facts are simple to arrive at if we consider that the ground in the Gallatin Valley is being lost in exchange for homes, commerce and streets at a rate faster than most of us can imagine. We are carpeting over the good earth and entombing it.


Soon, the Gallatin Valley will be another Portland or Fort Collins or any other town without a daily experience of an intact ecology. Yes, there may be birds in the trees and coyotes in a city park at dusk. But we will not be living in the place that we know and can describe today.


Grass roofs like those I dreamt of are not unknown to Bozeman or the surrounding county. There are two I know that are most remarkable because they are almost unremarkable in their presence in the landscape, and in this community of place.


One is found along Sourdough Road, its shed roofs low to the roadside and high to the creek to the west. This house was designed by Richard Neutra, an architect who left us a legacy of thoughtfully designed homes during the modern era. Most of his homes were built in California and have that easy-going sensibility in which walls fade away to let the exterior indoors. 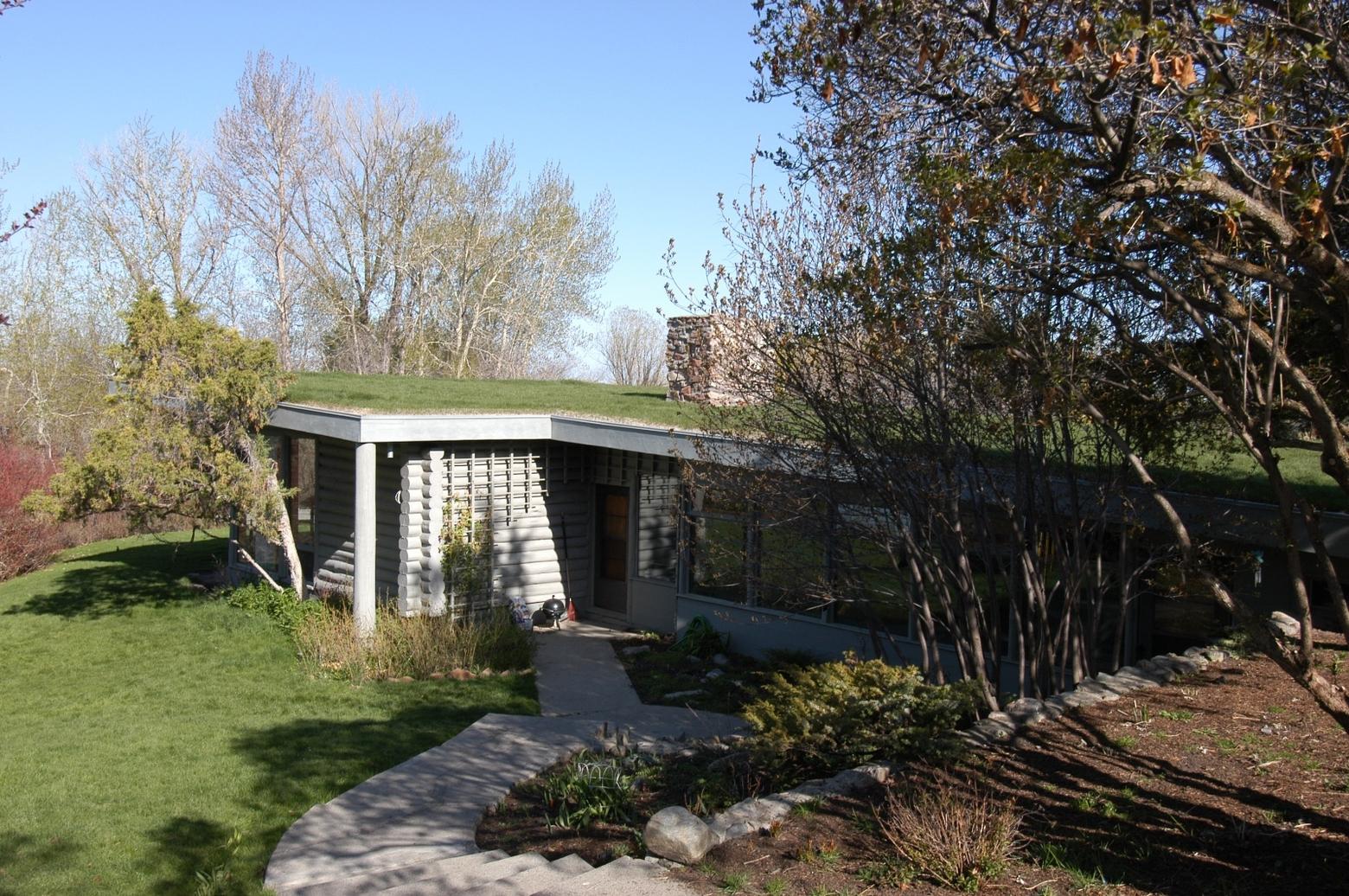 Besides concealment, low-slung sod-roof homes give occupants a more intimate connection to the earth and the grass absorbs heat, one small tool in addressing climate change. Photo by Joe Valerio
Neutra’s house in Bozeman was designed for a professor at Montana State University and his wife.
Neutra spent time with his clients on the land before he conceived of the simple idea of lifting the grass up and tucking the house below. “If there is a sacred space in Richard Neutra’s work, it is that which lies between the envelope of the building and the landscape itself….where there is little interference between the constructed and the natural landscape," MSU architecture professor John Brittingham says.
The house is modest in expression, simple by the standards of most homes showing up in town today. It’s not built of materials that required shipment from far-flung places, its walls are made of log, yet they have a modern disposition that negotiates interior from exterior.
The spaces within the house feel like they slip down the contour of the hillside bringing those who dwell inside views of the trees and creeks to rest in the middle of the natural world in which the house is situated. 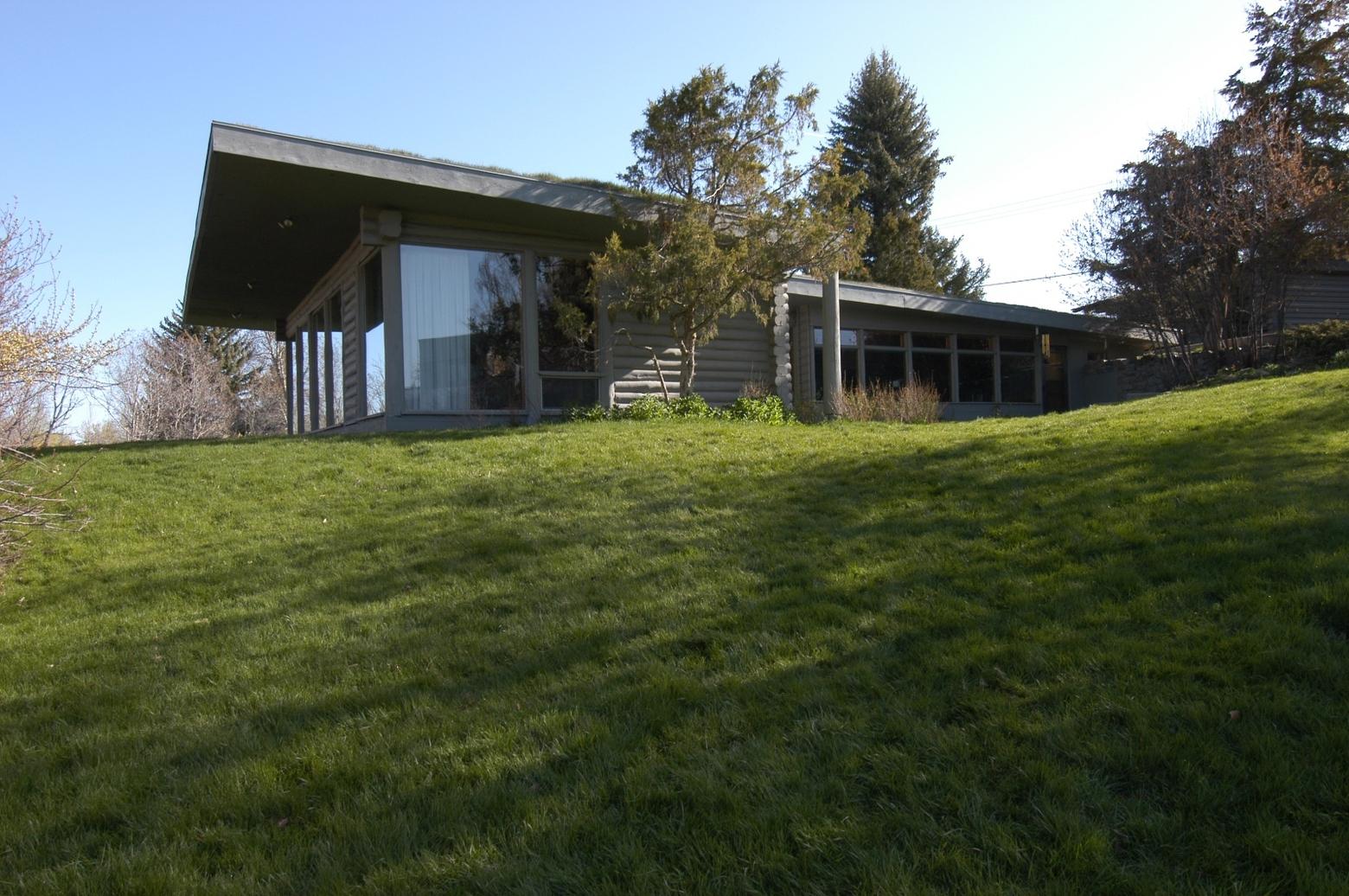 A house that affords fine views without blighting the views of others. Photo by Joe Valerio
The Neutra house still has much to teach those architects who seek to make place and peace, to leave their memory in the buildings of this region. And these lessons start with having the humility to have your design work passed by, to exist in quietness and live within the greater context of the natural world. These lessons also grow from a confidence that such a design is valuable for its presence in the natural world, and intelligence that survives beyond the immediate gratitude gained from of the community’s gaze.


In 1998, the year I moved to Bozeman, Rich Charlesworth and Dan Harding designed a sod roof home for a family in the Eagle Rock subdivision.
Have you ever seen it? Probably not, because as Dan says, “the idea of the house was to make it disappear.” 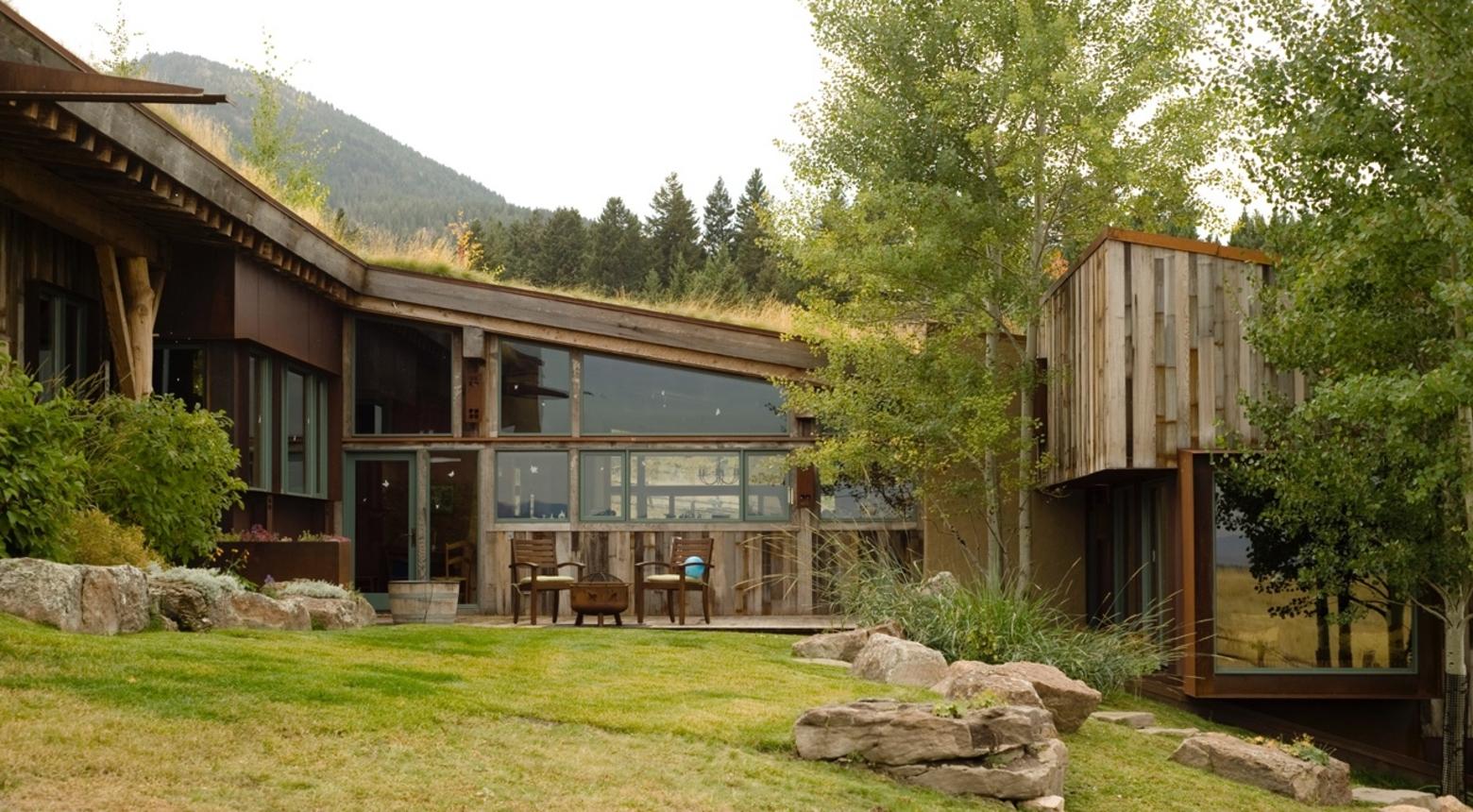 The roof at Eagle Rock, when planted with wildflowers, also attracts pollinating bees and butterflies. Photo by Derik Olsen
Harding, now a professor or Architecture at Clemson University, says that the concept behind the home was to “create a house that was sitting down, like a picnic,” where the sod is akin to a picnic blanket.” And it behaves just this way, casual and unassuming in its place, they figuratively and literally cut the fescue from the meadow lifting up the earth to place the house below to assure that the construction would not impose itself on the landscape.
The landscape expertise of Linda Iverson was retained to ensure that the replanting of the original fescues and existing earth could regain its “equilibrium” even having native iris reappear with the native grasses. “It was beautiful to see the house disappear in all the seasons,” Harding says.


What if instead of our preoccupation with notoriety and fame, we sought invisibility? Could we all live happier lives if we lived less assuming existences?


And what about the dream of a Gallatin Valley full of green roofs? It’s not so far-fetched. It may be magical even, but no dragons are required and the results may bring about full-time dreams of living in a place that is better for us all.

Soft, quiet earth tones suggest a structure that grew out of the ground. Photo by Derik Olsen
CREDITS: 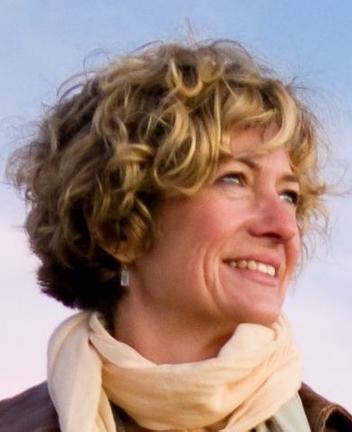 Lori Ryker is a thought leader in place-based architectural design. She is founder of Artemis Institute and Remote Studio, a non-profit immersive education program that teaches college students how to work more sensitively, respectfully and responsibly in natural environments. She earned a Ph.D in Architecture from Texas A & M University and a Masters of Architecture from the Harvard Graduate School of Design. Ryker lives in Bozeman, Montana and is founder and principal of studioryker based in Livingston.
Read more

Increase our impact by sharing this story.

GET OUR FREE NEWSLETTER
Never Miss A Big Story!
Tags: Lori Ryker

Trouble in Aspen: What Happens When Working Class Employees With Affordable Housing Retire?
Should they be encouraged to leave in order to make room for the next generation of worker bees?
Read
Back to home