To Kill A Migrating Antelope In Wyoming 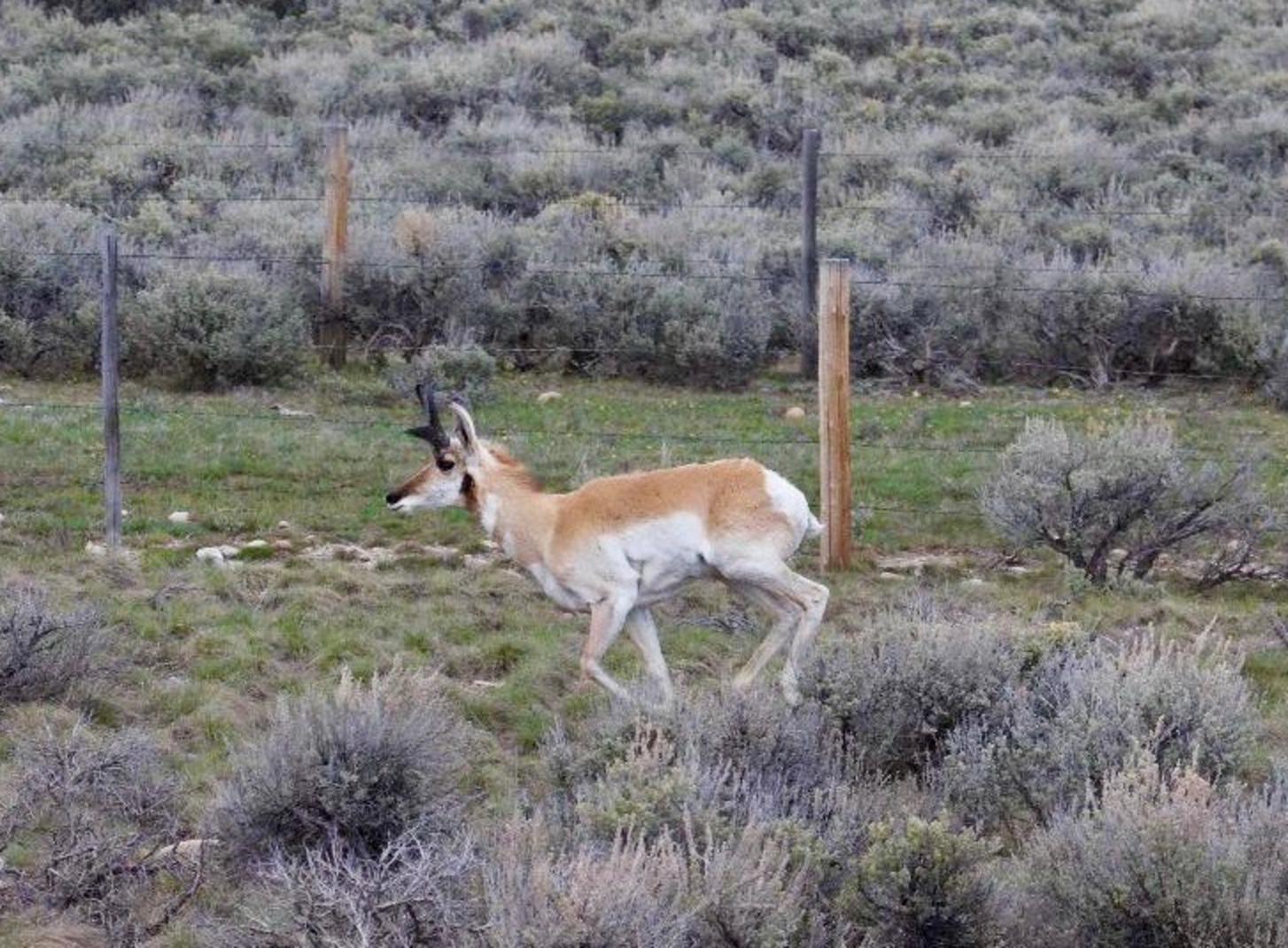 Every spring, pronghorn that spend their winters in the Upper Green River Basin in Wyoming migrate north through the Hoback and on to their summer grounds in Jackson Hole—a remarkable journey but fraught with sometimes deadly obstacles.
EDITOR’S NOTE: Is past really prelude? Writer and scientist Franz Camenzind has for half a century made sojourns throughout Wyoming as part of wildlife documentaries, research projects and conservation efforts. Here he shares an essay penned in spring 2003 that remains as timely today as it was then. It was prompted by a trip he took this spring to the places south of Jackson Hole that inspired the piece.

Essay and Photos by Franz Camenzind
My recent filming trip into the Upper Green River country was eventful, if not particularly successful. My friend and I were searching for spring scenes of deer and antelope migrating from their winter sagebrush range to their summer high country haunts.
It was cold that Saturday morning, windy with off-and-on snow showers. This country lives at 7,000-plus feet and winters last too long and the summers seem like interrupted dreams. I filmed some nice sequences, but none of the golden pieces we were hoping for.
What we wanted was to tell the story of migrations and why this high sagebrush steppe is the foundation to the survival of the region’s deer and antelope.  The focus being how summer homes were now taking the place of expansive, open ranches.  Where oil and gas fields with wells soon to number in the thousands were suddenly violating a landscape that only a decade ago held nothing but unspoiled rolling sagebrush hills and precious green river bottoms. This, a land where vistas seemed to stretch from one end of the imagination to the other, and where Wyoming's highest mountains, the Winds provide reference to the east, with the Wyoming Range bounding the west.
This is a special country, one demanding a person to have a hardy soul, lonesome personality and a dream-filled imagination for love.  And I love it.  It is my wild open country.  But now it's under attack. Thousands of iron probes are being drilled deep into our fragile mother earth. And within it all, I wonder if wildlife can survive, if the earth can bear the pain and still sustain its companion life. 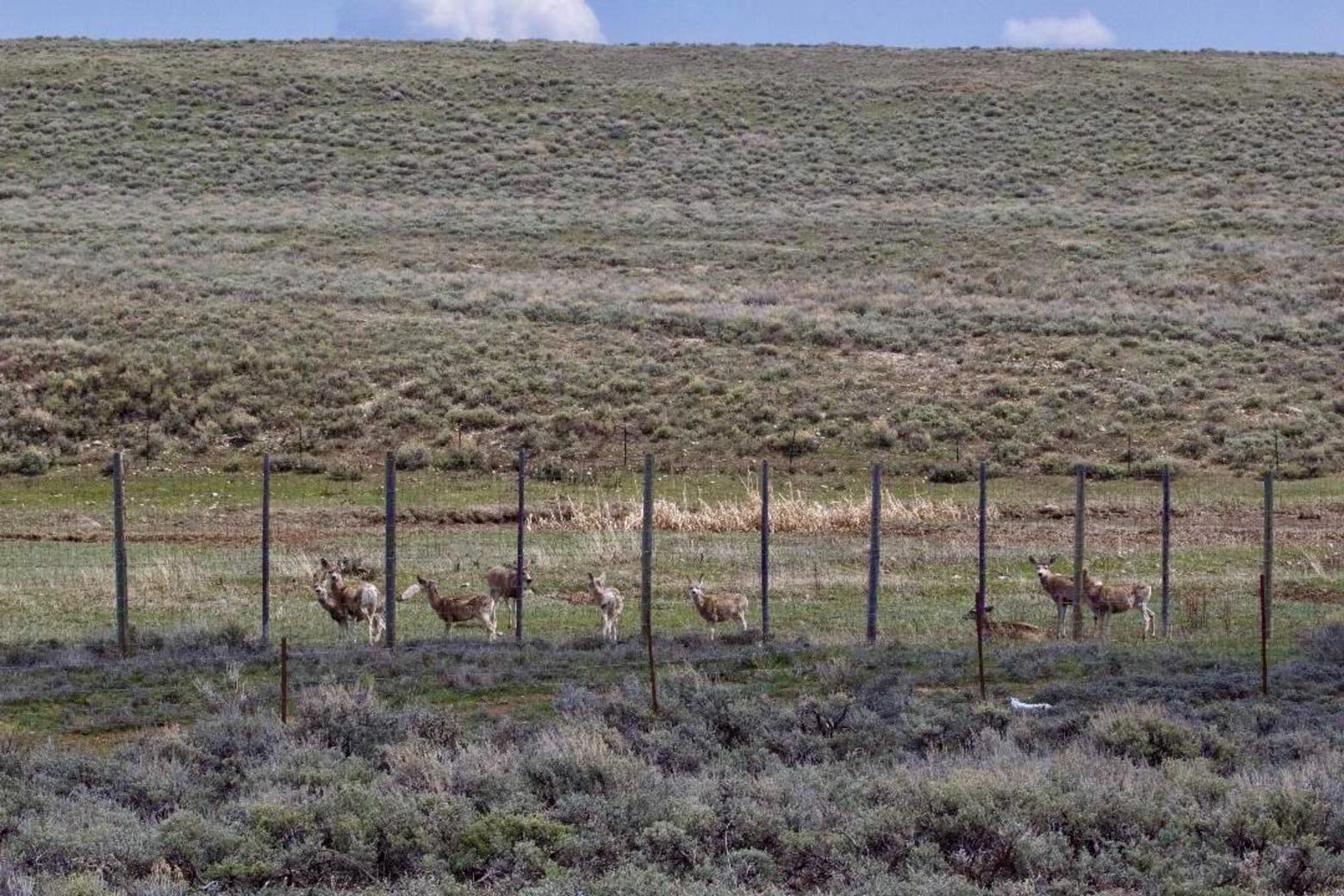 My friend and I were hoping to film this story of how survival for the deer and antelope is all about an open and unobstructed landscape and the migrations that knit the scenes together.  A place for deer and antelope to summer, to birth and to grow: and another place to survive the long Wyoming winters and make it to the next migration. All this needing to be connected by pathways of open ground, ground that has carried uncounted generations of wild lives from one season to the other- and back again.
These migrations are one of the most prominent parts of all the life that pulses throughout this much greater, living landscape.  But today we missed; their prominence must have been just over that other ridge.
Then, as the daylight was waning and we were driving home through the Bondurant Valley with its miles of private land fences lined across the landscape marking individual ranchettes, each proclaiming how one parcel belongs to me, and not to another. Fences that serve to announce, "It’s mine, stay the hell out."  That may work for folks similarly inclined, but it means one obstacle after another for a creature like the antelope that lives in two dimensions: forward and laterally, as far as their needs carry them.  Fences are barriers to that freedom.  They entrap the very soul of what it is to be an antelope.  It was in this place of wired human webs that a wildlife drama unfolded as foretold. 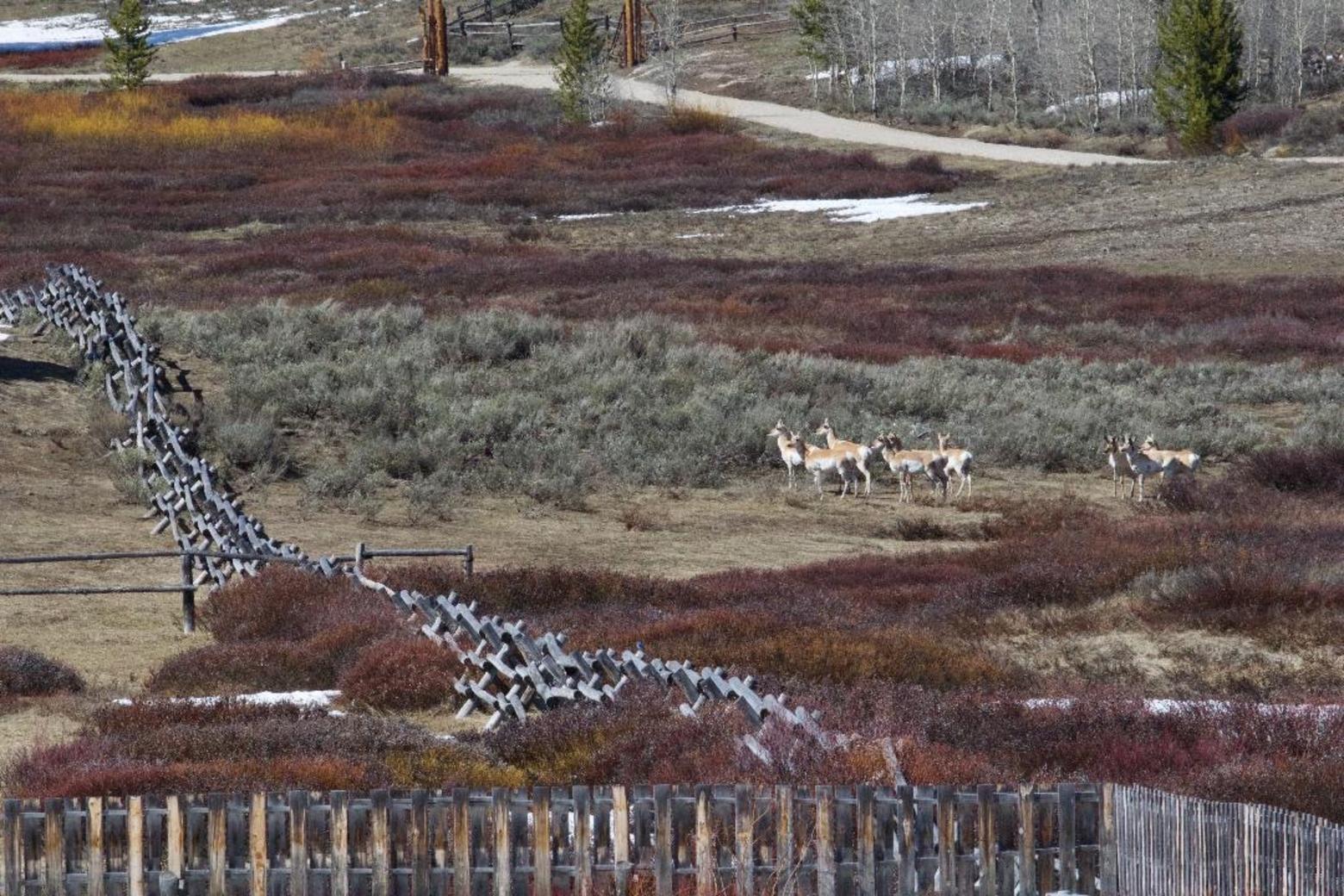 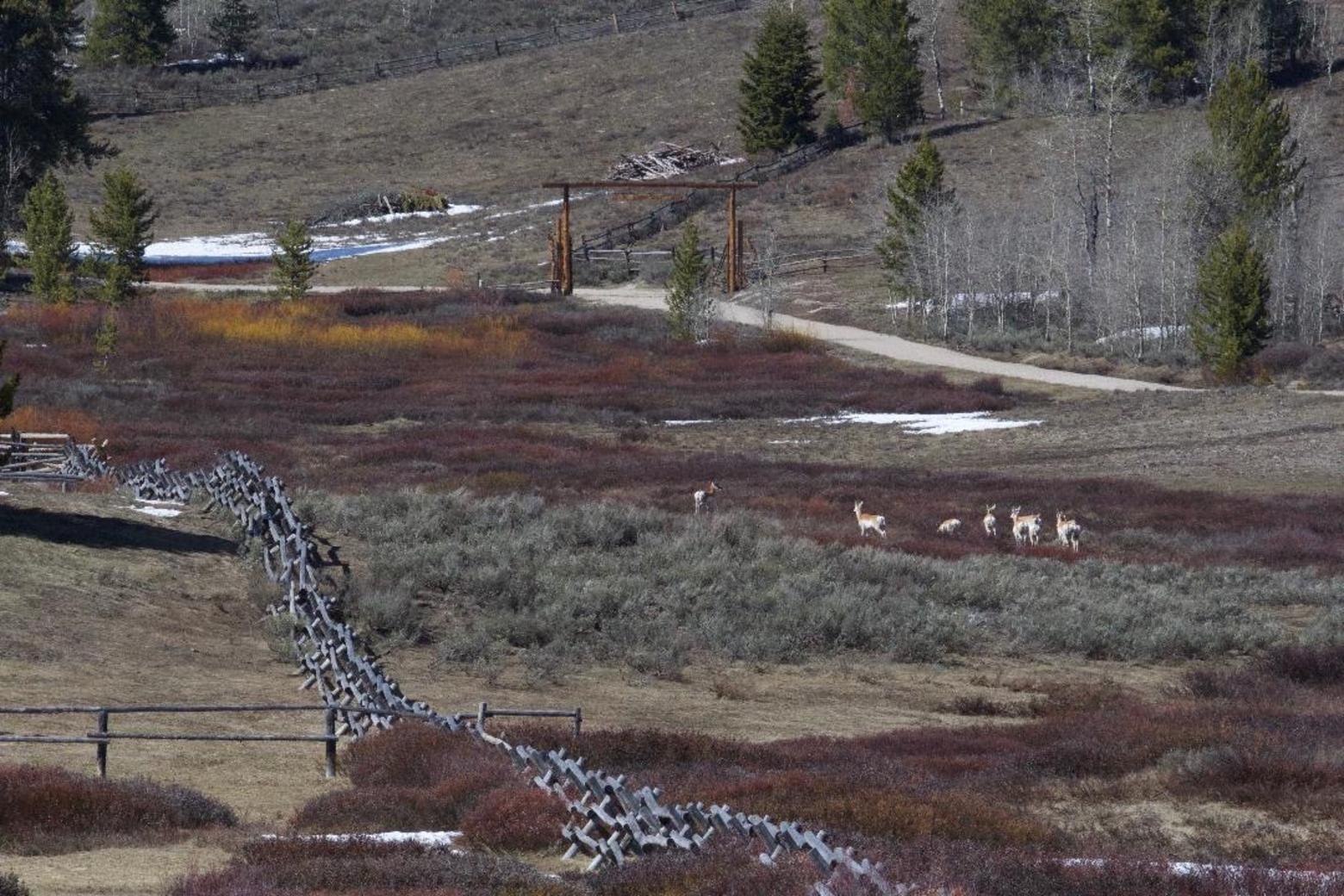 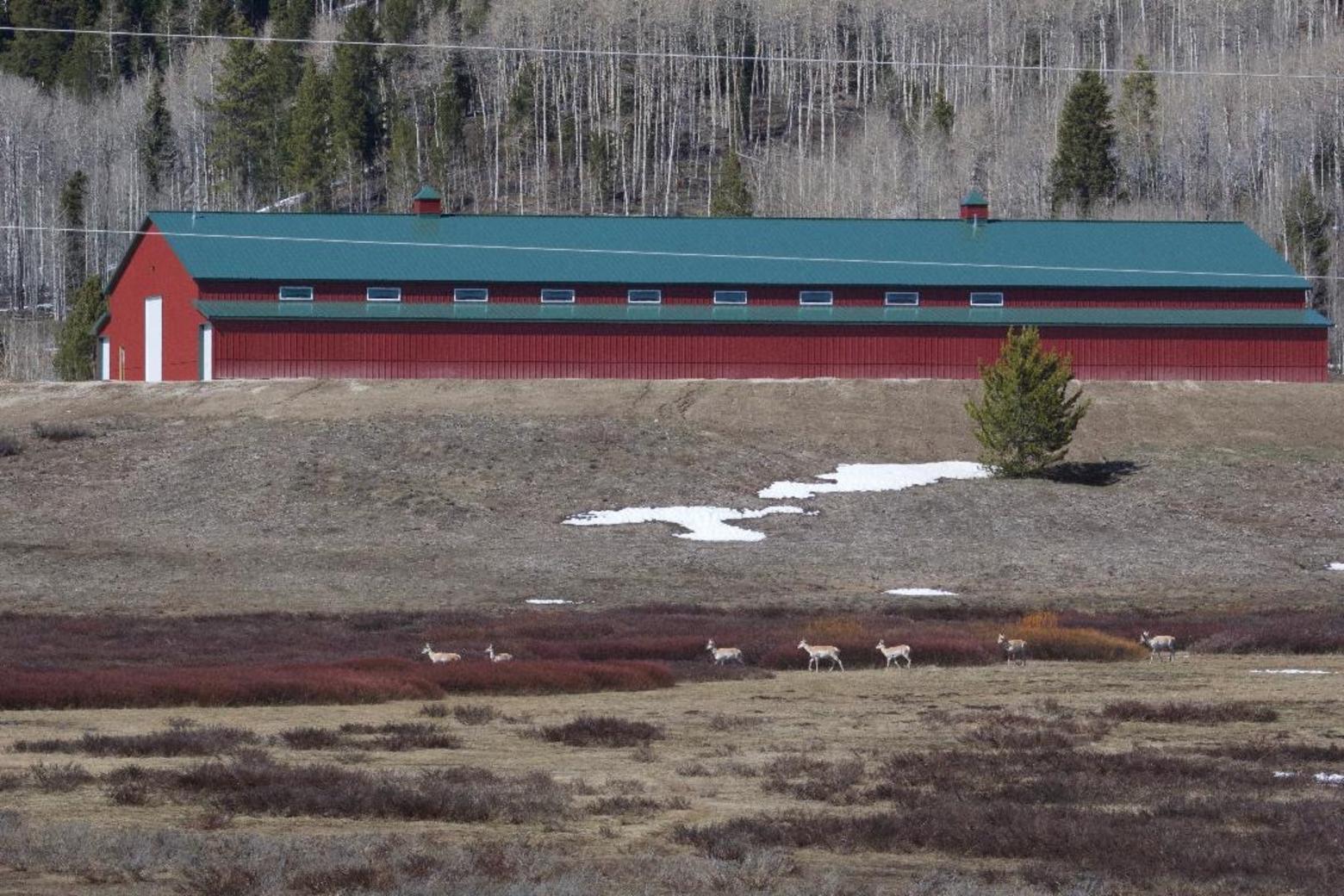 A band of pronghorn contemplate how they will maneuver obstacles that impede their long seasonal commute that for some reaches Grand Teton National Park. The three photographs above were taken by Franz Camenzind on May 7, 2020 at a place known colloquially as "The Rim" between Daniel Junction and Hoback. Scenes like this are repeated over and over again for miles. Photos by Franz Camenzind
Driving through this valley, that all too common image of a road-kill abruptly appeared just beyond the fog line, the body of an antelope lying against a closed gate to one of the private ranchettes.  After a not so perfect "U" turn we ended up next to this poor soul, this beautiful buck in the prime years of its life, a soul who knew only of living by free and graceful movements, was now crumpled against a gate.
As I began filming this death scene through the open window the poor beast moved—it was still alive! I almost died! It tried to stand, but its back legs were still, motionless; connections between desire and ability severed. This, the fleetest animal on the continent was crippled to near death! 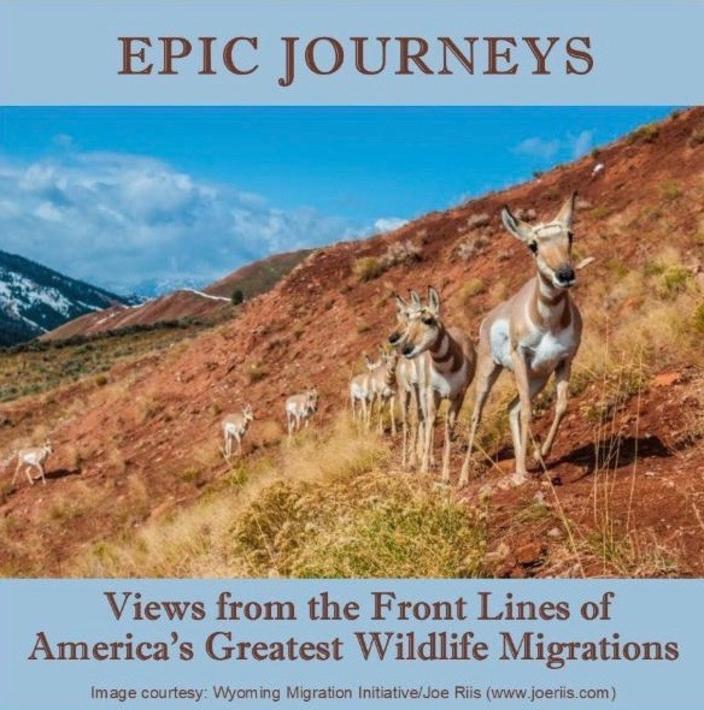 We jumped out of the car and I ran to the back looking for something heavy to put into my hands to bring the suffering of this poor creature to a speedy if not timely end.  After throwing all sorts of stuff about, I grasped a heavy tire iron.
Walking up to the helpless, beautiful antelope, I felt as though I were in a trance, simply doing, with no conflicting thoughts. Again, it struggled to rise to its feet, but as before, its back half laid still–having lost its ability to act.
I held him by its pronged horn. He struggled. He bleated a chilling and begging cry. He looked at me- I had to drop him back to earth as if doing so would bring on a miracle. I had to kill him. I knew that. I had to tell him that he could no longer live here.
My friend laid his hands upon the beast, praying for its speedy passage to the other side, apologizing for our doings. This creature as fleet as any this earth has ever created could no longer live in a world of second homes and human territories marked by roads and fences segmenting yesterday from today. A tire iron in my hand had to bring his suffering to an end.
This young buck antelope had endured the winter in oil and gas fields with roads, trucks and roughnecks, but he could not survive the first week of his having arrived back to the place filled with summer’s green grasses where living was supposed to be easy. 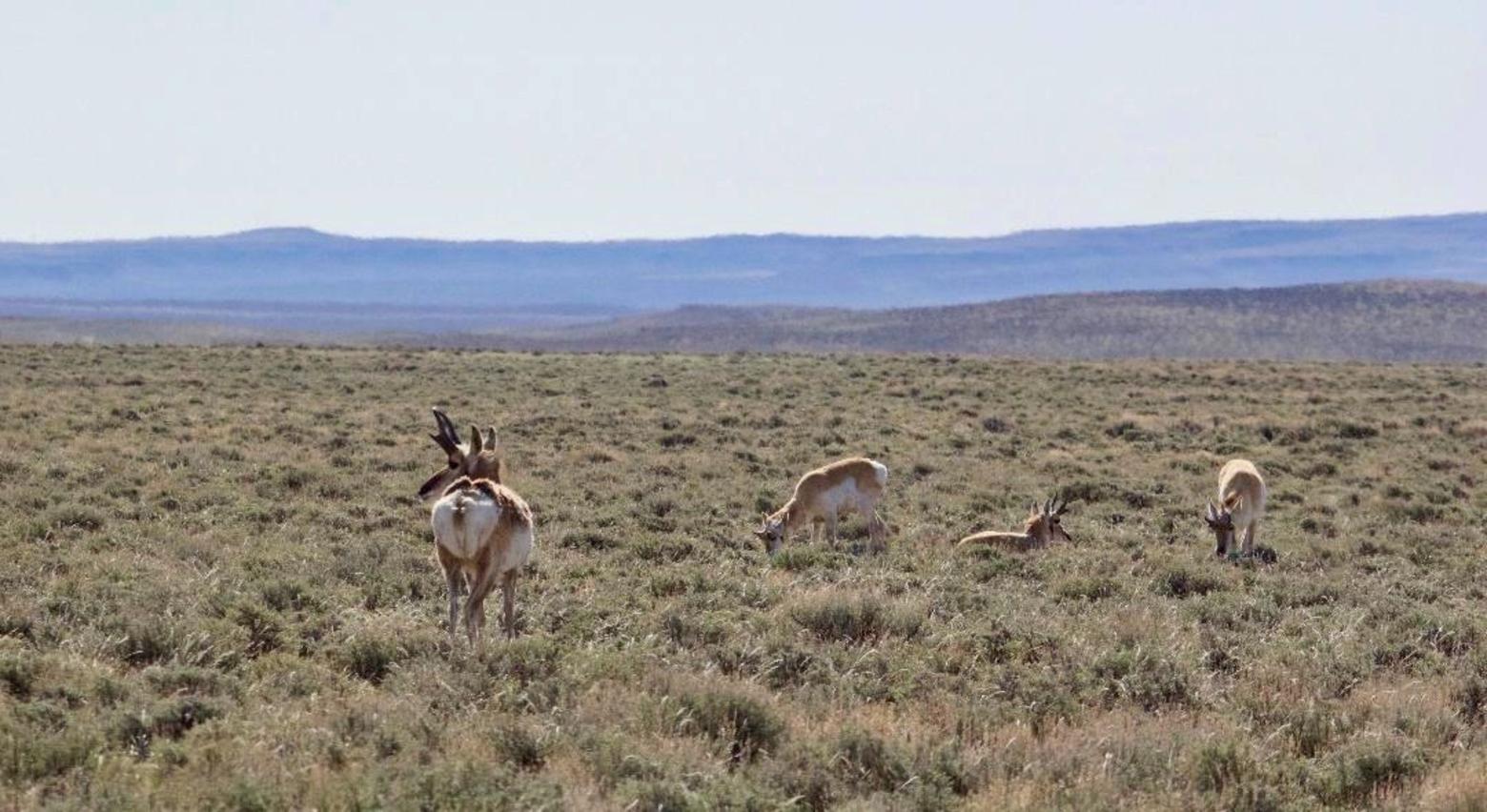 I was angry. Sadness overwhelmed me. The wave of feelings welled up in my gut. Having to kill something with my own hands, with its huge black eyes looking up at me. I saw in those eyes the centuries of instinct imbedded within this perfect, simply beautiful life. I saw helplessness and fear, and I saw innocence and a desperation for life. What did he see in my eyes during these his last moments of life?  Was I the angel of death, or was I accepted as the one once removed?
Being there together in this place and yet both of us vacant of any comprehension of what brought us to this moment– having his eyes go dull and cold from the force of my hand. What could I do?  What have I done?  My soul truly poured out sorrow and love: for what good- to what god? Why was it right for me to kill?
That morning as I awoke to leave on this trip, I moved from sleep to awake with one bold, vivid image burning in my mind’s eye:  I must take my pistol with me this day because I would have to kill an antelope!  For the next few minutes I remained frozen in bed as I very deliberately convinced myself against this.  I have not carried a firearm into the field for over 20 years- why should today be different?  Why was this thought so vivid?
I did not take it with me.
That afternoon I again saw the image from my sleep-mind.  I had to search for a tire iron because I had not taken the pistol.
The emotion of this event had to come out. Yet, there still remain too many unknowns about that moment for me to fully comprehend.  Perhaps it was nothing more than my being in that place, hopefully only moments after the poor antelope was hit by a car, or truck. Struck half to death because it couldn't escape the fences now entrapping his ancestral land.  But I fear it was laying there for some time suffering its fate and all I was called upon to do was speed its exit from this world.
For these creatures, who know only what has been woven into their genetic fabric over the generations, this dissected world we humans bring to the land leaves the antelope no time for learning and no margin for failure. I was only the hand that came to beat a creature to death.  But what was the cause of this antelope’s death?
What a miserable fate for it, and I fear for me too. God help us all.
But I must say the premonition I had that morning before leaving on the trip haunts me as much as having its reality play out. I saw it before it happened.  I had no choice, no doubts, no deliberating my actions.  I knew my role; I had foreseen my time- I had to kill an antelope.
My dear friend who accompanied me that day has since passed away—also tragically. I can hope he is now forever watching his beloved antelope running free in his Wyoming home. I share this in his honor.
POSTNOTE FROM THE AUTHOR: I wrote this the day after I made a trip to the Upper Green River Valley to observe migrating pronghorn in late April 2003. The original essay appeared in The Heart of Sublette County: A community art collaborative expressing sense of place. This is a slightly edited version of that piece. The story is told as the events occurred. 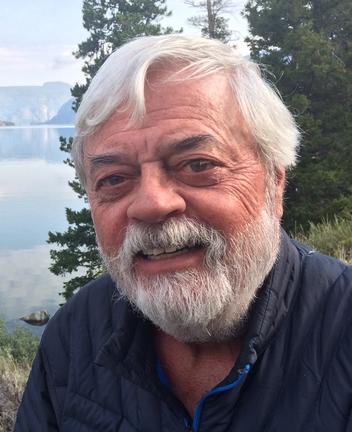 Writer Franz Camenzind, a longtime resident of Jackson, Wyoming, has a diverse background. He is the son of dairy farmers in Wisconsin and not long ago was honored as a distinguished science alumnus at the University of Wisconsin-Stevens Point. A biological field researcher by training, he earned his PhD from the University of Wyoming. He is known for helping to pioneer new appreciation for the social dynamics of canids, namely coyotes. Camenzind is an award-winning wildlife cinematographer who worked for companies ranging from BBC to National Geographic, including a project in which he was the first to film pandas in the wild. During his tenure as a professional conservation advocate, he served as executive director of the Jackson Hole Conservation Alliance and, earlier, he was a founding member of the Greater Yellowstone Coalition. In addition, Camenzind writes a column, Wild Ideas, for Mountain Journal.
Read more