Did Two Montana Politicians Get Lost In Their Search For 'Honest Truth' With Public Land?

In their Paradise Valley photo op, Steve Daines and Senate hopeful Matt Rosendale appear to have trouble knowing the difference between private and public tracts 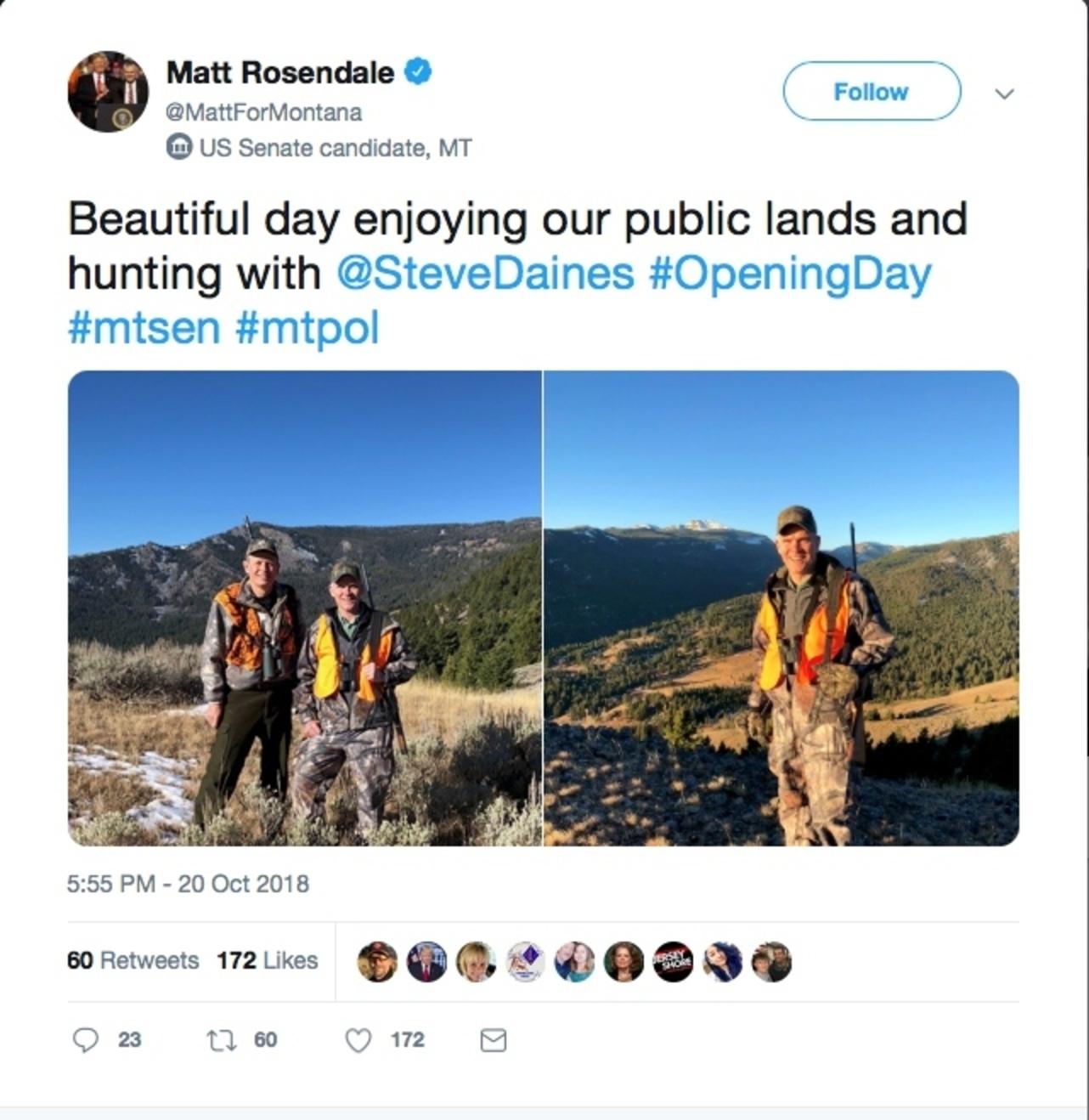 On the opening day of rifle season for deer and elk in Montana, State Auditor Matt Rosendale and U.S. Sen. Steve Daines went on a hunting trip in the southern portion of Paradise Valley. Rosendale tweeted two photos that day: one of him and Daines and another of just him with Steamboat Peak off in the distance.
Then, 11 days later, on October 31, Daines spoke at a Republican event in Belgrade, Montana and gave his personal account of their hunting trip.
“There was no staff with us. Just Matt and Me. Just two Montana guys out with rifles on their shoulders. Orange vests on, of course. Out taking a look for deer and elk that day.”
Someone from the crowd asked if they got anything,
“We didn’t. It was a little warm. And we were hunting public lands. Right? That’s what we were doing that day. If we would have had permission to shoot on private land, we would have had an elk, I can tell you that. That’s the story sometime [sic]. That’s the honest truth. Matt stepped out of the truck and saw a bull, but it was on private land. We couldn’t shoot that bull. And we were looking for deer and elk on public land that day."
Doesn’t it make you wonder when someone uses the term “the honest truth?”
Beyond Daines seeming like he is trying too hard to convince people that they were on public lands, there are many things about this scenario that piqued my interest, since I have hunted on both private and public land.
First off, and this may seem minor, neither Rosendale nor Sen. Daines has a pack on in the photo. They look like I look like when I’m hunting on an eastern Montana ranch with a pickup parked close on a two track. I leave most of my gear in the truck if I’m not hiking far from the road.
However, when I’m out on public land and I’m miles from my truck, I have a pack on with everything I would need to harvest an animal. I also carry emergency supplies so that if something bad happened, I could spend the night outside. I suppose they could have taken off their packs for the photo but just looking at them, it seems unlikely.
Second, Daines said it was just him and Matt. So, who took the photo of them together? 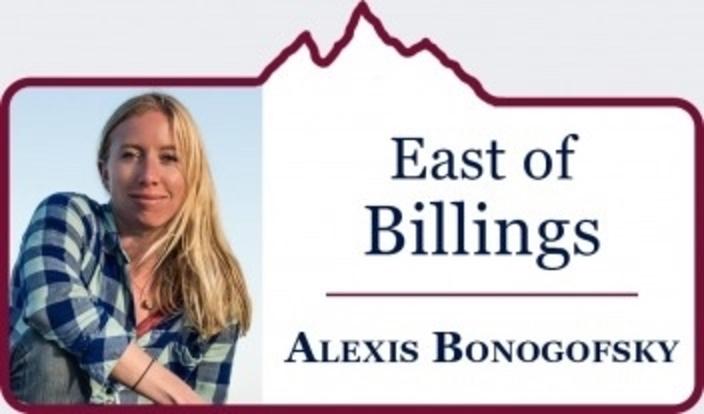 I imagined two of Montana’s highest elected officials, one of them, Rosendale, seeking this autumn to win a U.S. Senate seat against incumbent Jon Tester, taking out a tripod, putting one of their phones on it, and trying to figure out how to start the self-timer on the camera. Right?
The third and most important thing is the information I received from a Montana public lands hunter who compared ownership, topographical maps, and Google Earth views to verify the claims made by Rosendale and Daines. He believed there was no possible way Rosendale and Daines could have been standing on public land when they took those photos.
So on November 1st, Livingston-based journalist Elliott Woods and I decided to go out and see for ourselves.
Veracity matters when elected officials attempt to craft—or concoct—images of themselves.
Early that morning, we parked at the trailhead and began our hike up Donahue Trail No. 183 through an inch of fresh snow. After a short decline we began a fairly strenuous two-mile trek up the mountain. We saw elk tracks and fresh elk scat, still steaming, leaving both of us wishing we had brought our rifles.
In this part of the Gallatin National Forest, the public land is checkerboarded with the privately owned Point of Rocks Ranch, LLC. Point of Rocks is owned by millionaire Robert E. Smith, the co-director of Maryland-based Sinclair Broadcast Group, a company that owns almost 200 local TV stations across the country. Sinclair Broadcasting has been in the news recently for using its airwaves and cable lines in support of Trump’s conservative agenda.
It is inconceivable to think Rosendale and Daines do not know Mr. Smith. Ironically, his media outlets have helped peddle the President’s claim, embraced by Rosendale and Daines, of there being a serious problem with “fake news.”
The Donahue trail weaves through portions of the Point of Rocks Ranch in numerous places.
There were only a couple of points where there was even a small chance that the photo could have been taken on public land. We were looking for specific landscape characteristics featured in the photos. The first landmark we tried to replicate was the correct elevation at which the picture was taken. We needed to be high enough to get that particular view of Steamboat Peak, but at a place where we could also see the four-wheeler trail and two large open meadows shown in the photo below that are located on the Point of Rocks Ranch. Both are clearly visible behind Rosendale in the photo. Note that Rosendale was also standing on a flat spot with no sagebrush and right below him is a thick line of pine trees. 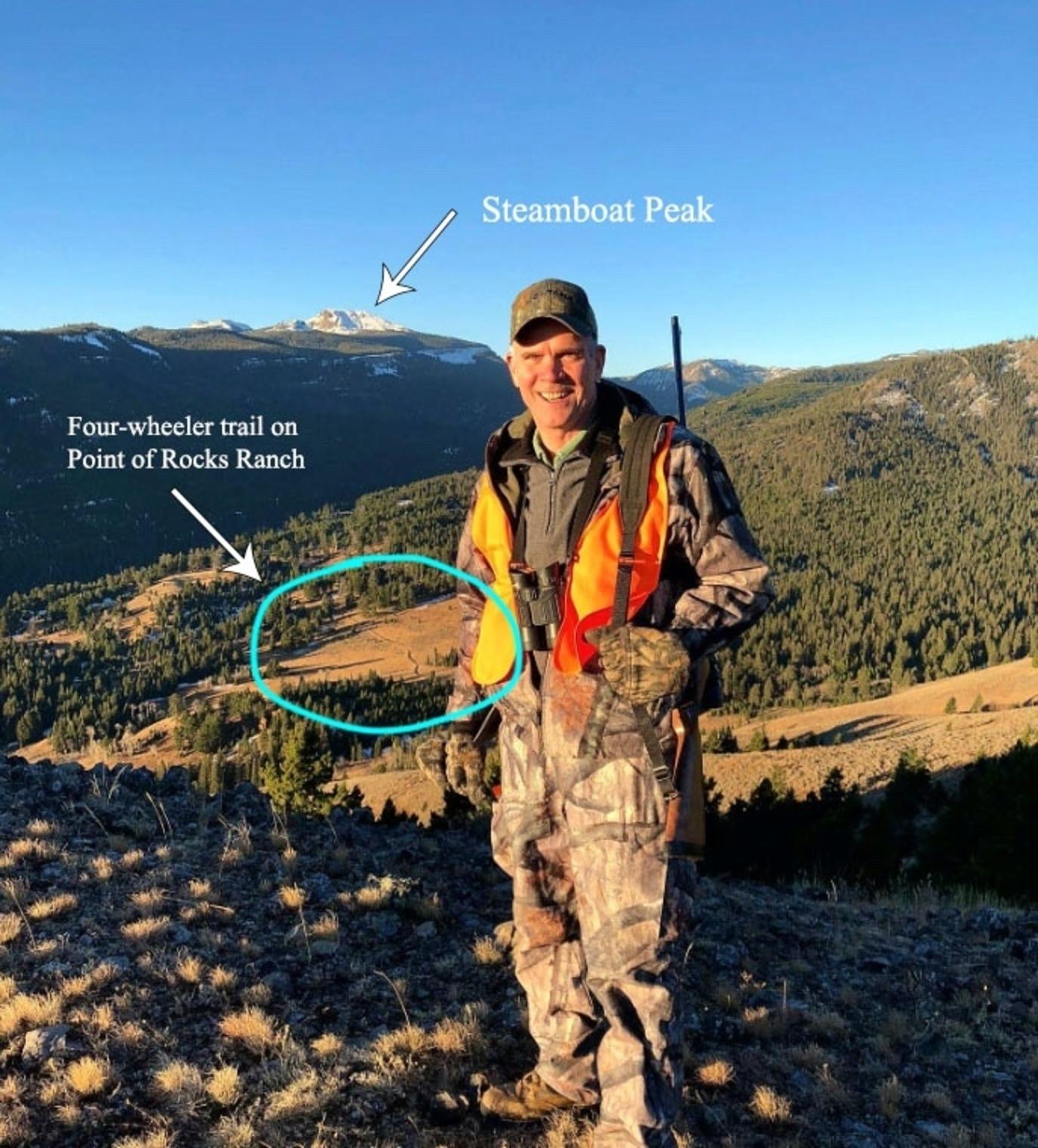 The Senate hopeful getting a lesson in land orientation courtesey MoJo columnist, rancher and hunter Alexis Bonogofsky
Why does this matter? Because both Rosendale and Daines have a checkered history with their support of public lands. In 2015, Daines cast the deciding vote in support of a Senate budget amendment put forward by Sen. Lisa Murkowski, Republican from Alaska, that proposed creating a process to allow the "transfers, sales or exchanges of federal lands with states or local governments." Just this year, Daines introduced a bill that would strip away protections for nearly half a million acres of Wilderness Study Areas (WSAs) in Montana without any public comment.
For his part, Rosendale has been more blatant in the past about his support of the public lands transfer movement. During the primary campaign for Montana’s Congressional seat in 2014, he said,
“The U.S. Constitution clearly defines the purpose for the federal government to retain land for post offices, batteries and things like that,” Rosendale said. “There is no call in the Constitution for the federal government to own national forests or BLM land and just to manage those additional lands.”
Only when Rosendale and Daines felt significant public backlash in response to their anti-public lands agendas have they hastily moved to soften, downplay or distort their positions.
After a lot of hiking around, analyzing the photo that Rosendale posted on social media, and taking photos of each other standing in different locations, we determined there is absolutely zero chance that they were on public land when they took that photo. 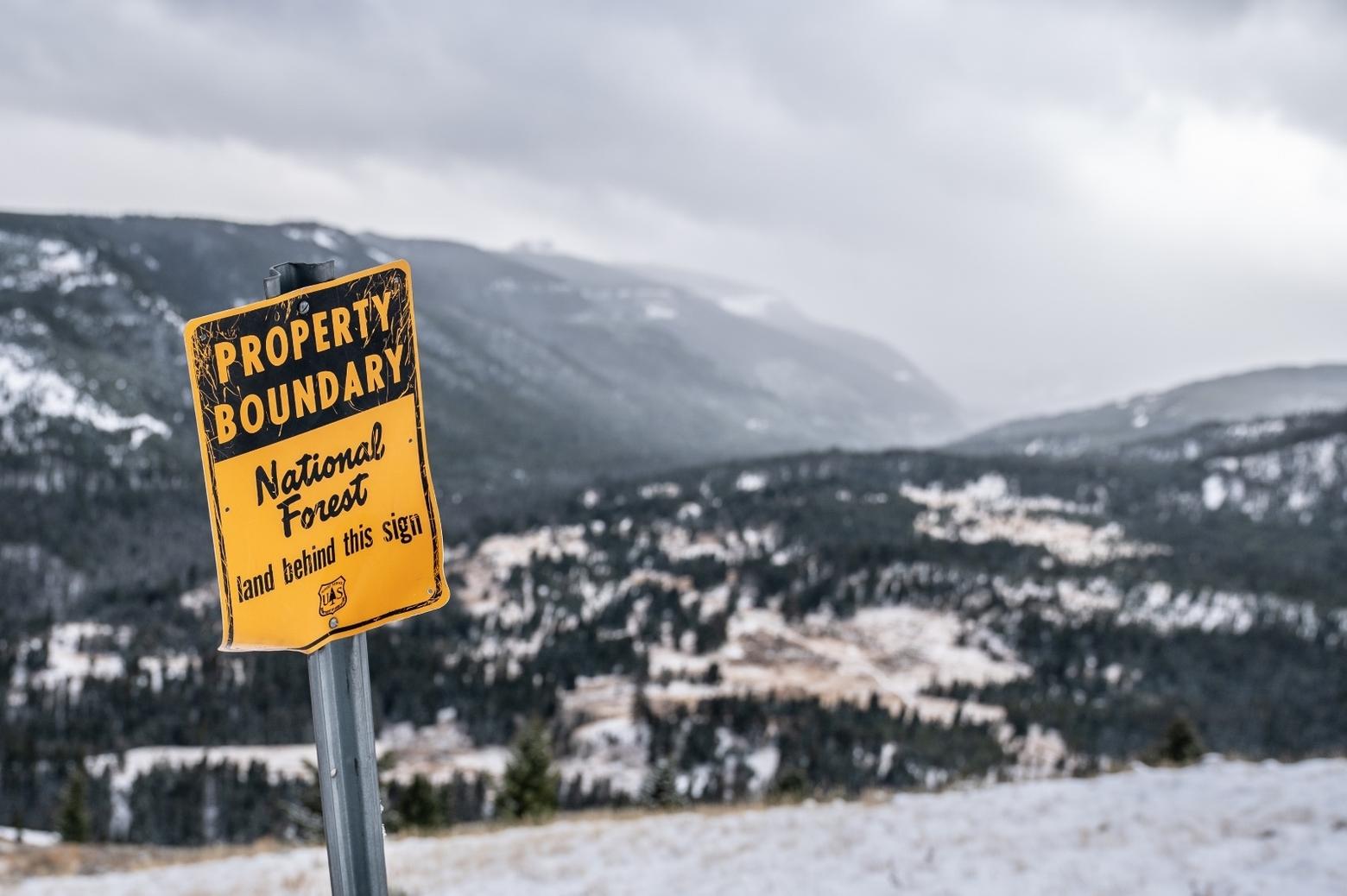 However, there is a location (in the photo below marked with the red waypoint) on the Point of Rocks Ranch, right off the four-wheeler trail, about 300 feet higher than we could get to and where Google Earth shows the right topography and landscape features, where we do believe the photo was taken. And, it just happens to be right off the four-wheeler trail on Point of Rocks Ranch. 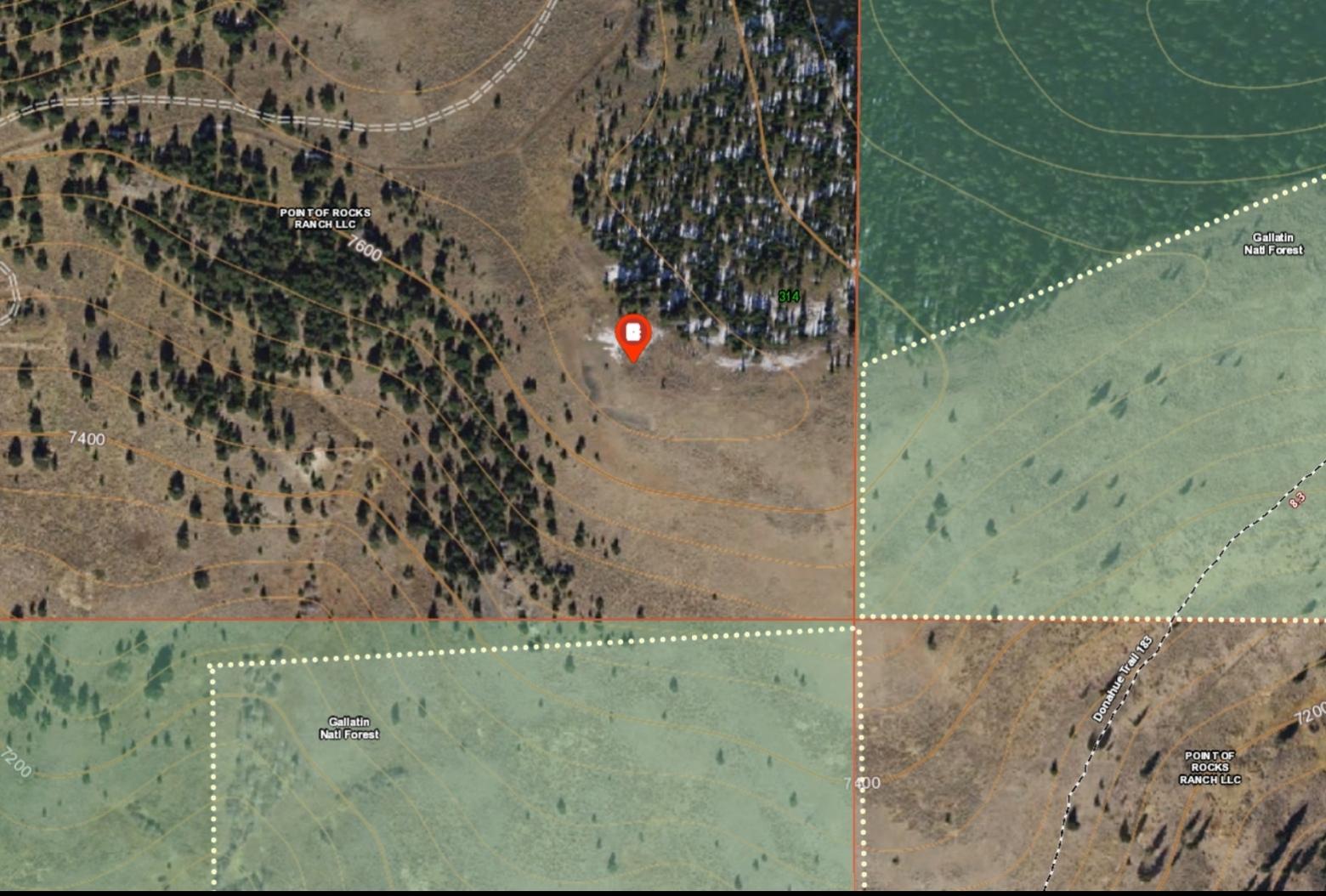 "The areas inside of the dotted lines (along a 2.8-milesection of strenuous uphill trail) are the only public land tracts that could even possibly provide that vantage point," Bongofsky says. "The red pin marks the end of a fourwheeler spur trail off of Point of Rocks Ranch. The Google Earth view lines up perfectly with the photo from Rosendale's Tweet. Note that the public trail is more than 300 feet of elevation lower.
I see two possibilities that account for what happened that day. The first is that Rosendale and Daines trespassed on the Point of Rocks Ranch. This is highly unlikely.
The second possibility is they had permission to hunt on the ranch, went to a point where they thought they were close enough to public land, used it as a staged photo op for the Rosendale campaign (aided by people who took the photo) and then they lied about what they were doing to the public. That photo was taken with the deliberate intention to deceive voters. They think so little of us that they didn’t think it necessary to walk 300 feet and at least stand on public land for the photo. 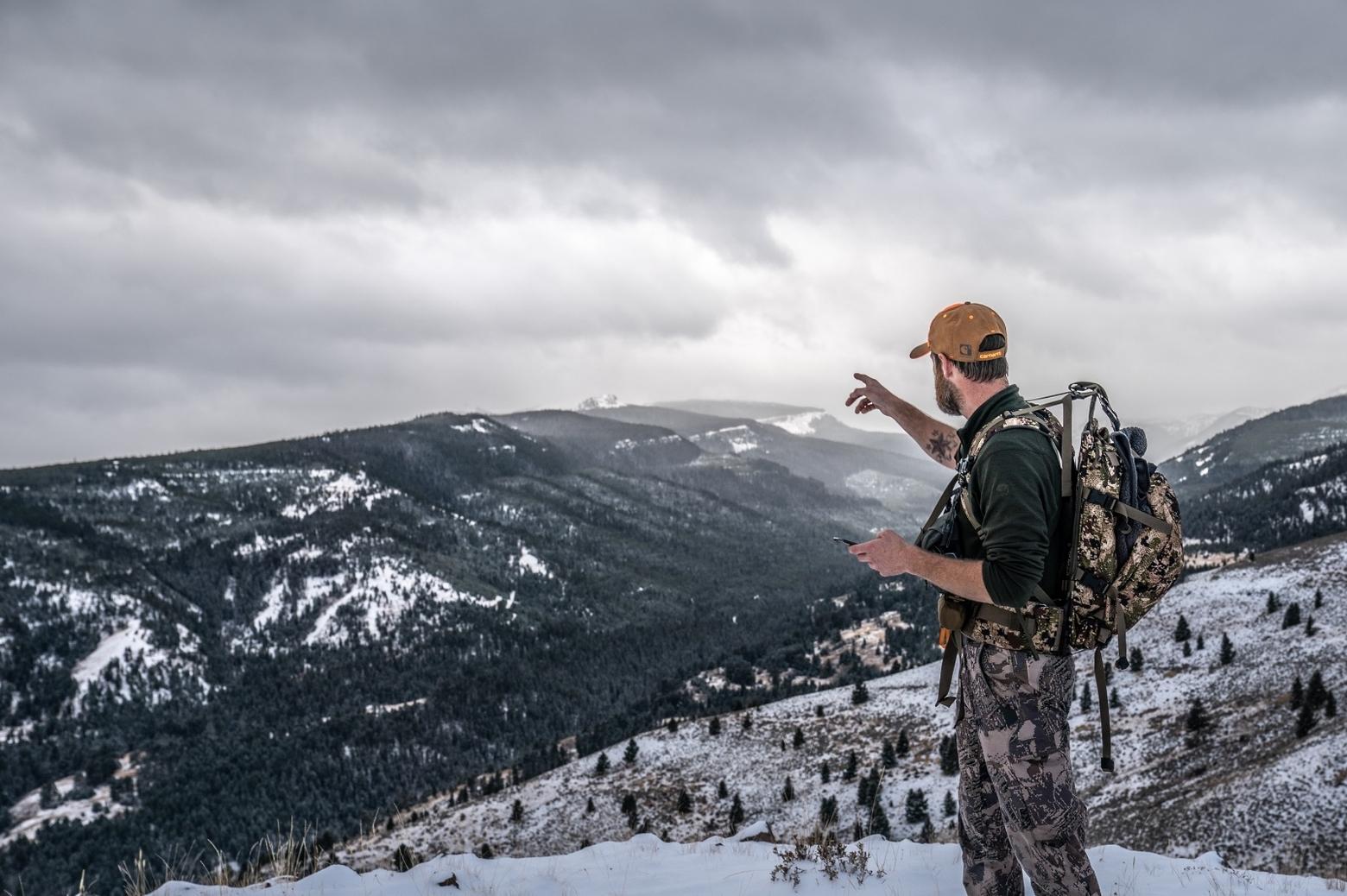 In their quest to ground-truth Rosendale's claims Bonogofsky and, journalist Elliott Woods identify the boundaries between where private property ends and the Custer-Gallatin National Forest begins. Photo by Alexis Bonogofsky
The day after our hike, U.S. Sen. Mike Lee, a Republican from Utah and one of the leading advocates for selling off federal public lands, came to Montana to campaign for Rosendale in Polson, Missoula and Whitefish. Lee sponsored a bill in 2015 to sell off public lands in a handful of western states, including Montana.
Public lands are the geography of our democracy. They are a great equalizer. These lands guarantee places that working class people—i.e. most of us—can go to pursue game animals and fill our freezer without having to pay exorbitant fees to private guides.
We need representatives who truly understand, on a personal level, how public lands are inexorably tied to who Montanans are as a people and are a major reason most of us choose to live here.
I worry that without that if our elected leaders don’t have that deep understanding and personal connection, hunting, as generations of my family have known it, and the Montana that we love, could disappear.
Daines said they were just two Montana guys out with rifles on their shoulders hunting deer and elk on public land.
What would have been more accurate is if he would have said, “We’re just two very wealthy guys with access to large private ranches owned by out-of-state landowners. We don’t actually have to hunt on public land like the rest of you do, but we’ll pretend to, to make it seem like we care, even though our actions as politicians suggest exactly the opposite."
That would’ve been “the honest truth.” 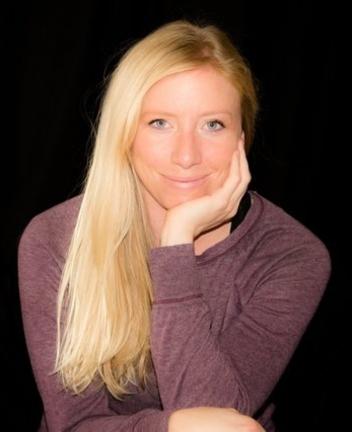