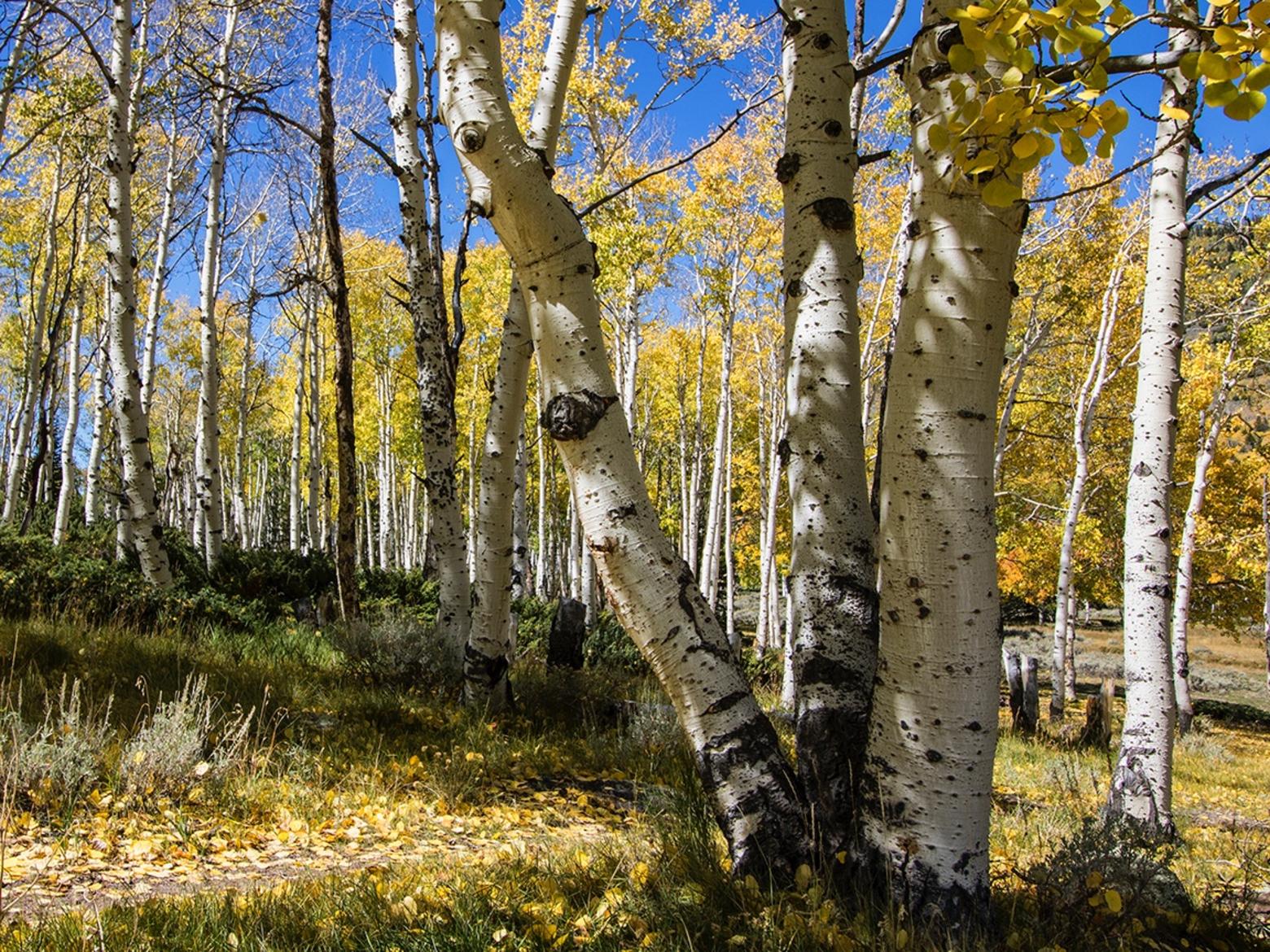 Pando is an amazing paradox—a massive grove of quaking aspen expressed in a multitude of colorful trunks but all part of the same single tree and root system. As author Paul Rogers writes: "What you see here is a microcosm in aspen aesthetic and ecology—white, yellow, blue; pseudo-sibling trees joined as one: a triple replications in DNA—lends dimension to Pando's autumn repose." Photo by Lance Oditt
EDITOR'S NOTE: Within the field of landscape ecology, the Pando aspen grove on the Fishlake National Forest of Utah is legendary—and it is in danger of dying from hotter, drier temperatures and other threats. Pando is one of the largest and oldest known still-living organisms on Earth. Quaking aspen are an important tree species in Greater Yellowstone and the Rocky Mountain West. Enjoy this essay written by a scientist who studies Pando and a photographer who celebrates this arboreal mega-being.
Story by Paul Rogers
With Photos by Lance Oditt

SHE IS NATURE AND HE IS HER COLOSSAL SCION.. Born in unknown distant time, he is anchored in place. Pando, a living paradox, is an array of biological riddles. At once, the forest instructs and confounds us. Here we invite a courting of the iconic tree—that is in its expression a full-perceived forest—so that you may know him afresh, unadorned, honestly.
The massive being likely germinated millennia distant; despite publicized estimates, Pando lacks a reliable age.  While a schoolchild understands that annual rings reveal a tree’s years, no reliable measure Pando’s age exists.  Current mature stems—commonly called “trees”—are between 110 and 130 years old. Guesses at the clone’s age suggest thousands of years.  It is unlikely that any given cell has survived Pando’s full life, though precise original DNA survives. What is clear, Pando’s entire makeup is male and, being a dioecious plant, all aspen clones are either female or male.
Pando’s total bulk (dry weight) is not disputed, at 106 acres (43 hectares), and with an estimated 47,000 mature stems, it weighs in at some 6,500 tons (5,800 MT)—making him the largest known organism on Earth. 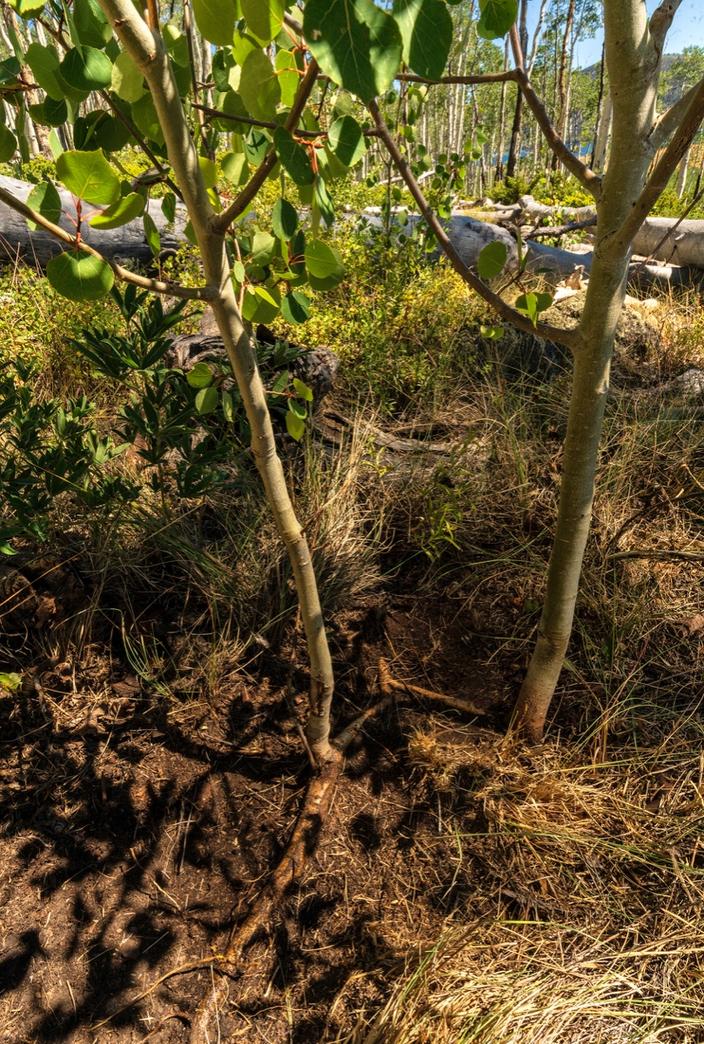 Out of One, Many: A new stem emerges from a root of Pando and begins its journey skyward. Each "tree" is expressive of the 106-acre organism's genetic make-up. Click on photo to enlarge.
This giant arose from a single seed the size of a pin head.  Although natural curiosities known as “biggest,” “tallest,” or “oldest” garner our attention, it is through keen engagement with nature’s individual characters that we find ourselves as one with, rather than separate from, this fragile planet.
At such a size we often overlook the minutiae that lend character to Pando. Warts and all, with countless variations, identity appears.  Trunks of the trembling giant are as diverse as human fingerprints.  Limbs diverge and die-off, skin is pristine or pocked, epiphytes ample or absent.  Branch scars, accented with tiny lichens, suggest human eyes. Some stems perish, others thrive.
Evidence of genetic replication is found in bark tone, leaf shape, disease susceptibility, growth ability, and defense capacity.

Among neighboring clones, chemical “taste” of supple stems and leaves varies in ability to repel insect and mammalian herbivores.  A trade-off, of sorts, exists between energy devoted to growth and to defense: Pando’s evolutionary gamble cast long ago may not pay off given today’s human wagers.

A characteristic eye-shaped branch scar on one of Pando's 47,000 stems plays host to a lichen colony. Although stems are genetically identical, each "tree" has individual characteristics. Photo by Land Oditt
Aspen stems may develop in close proximity, like triplets posing before proud parents.  Seemingly identical trunks paint a handsome portrait, though they stand in a gallery of thousands of pseudo-siblings.  Mystics have long pondered the power of threes, a configuration found throughout natural systems visible and not. The true power of three, however, lies in the unseen triple replication of DNA, known as triploidy, that characterizes some aspen clones.
Triploids exemplify fast growth in regeneration, offering a putative explanation for Pando’s unsurpassed expansion.  Rapid reproduction likely played a role in Pando’s historic success; it may precipitate collapse in the face of contemporary browsers.  Numbers and movement of herbivores—one native and one domestic—are largely controlled by human policies, placing people at the center of Pando’s outlook.
Pando to Pangea: Global tapestry interlaced with roots, woven in diversity
Prolonged isolation brings clarity to critical connections.  As we strive to live within earth’s bounds, scientists look to key species as “bioindicators” of ecosystem status.  As such, Pando is a model forest under a single-genotype canopy.
Clone by clone, stretching around the northern hemisphere, aspens facilitate enhanced plant and animal diversity.  Six species of aspen fill like-niches and face related threats from Kamloops to Karelia to Kamchatka.  These forests form essential habitat for myriad interdependent life forms.  As they flourish or flounder, so too do reliant species.  Thus, aspen conservation plays an outsized role in world biodiversity. 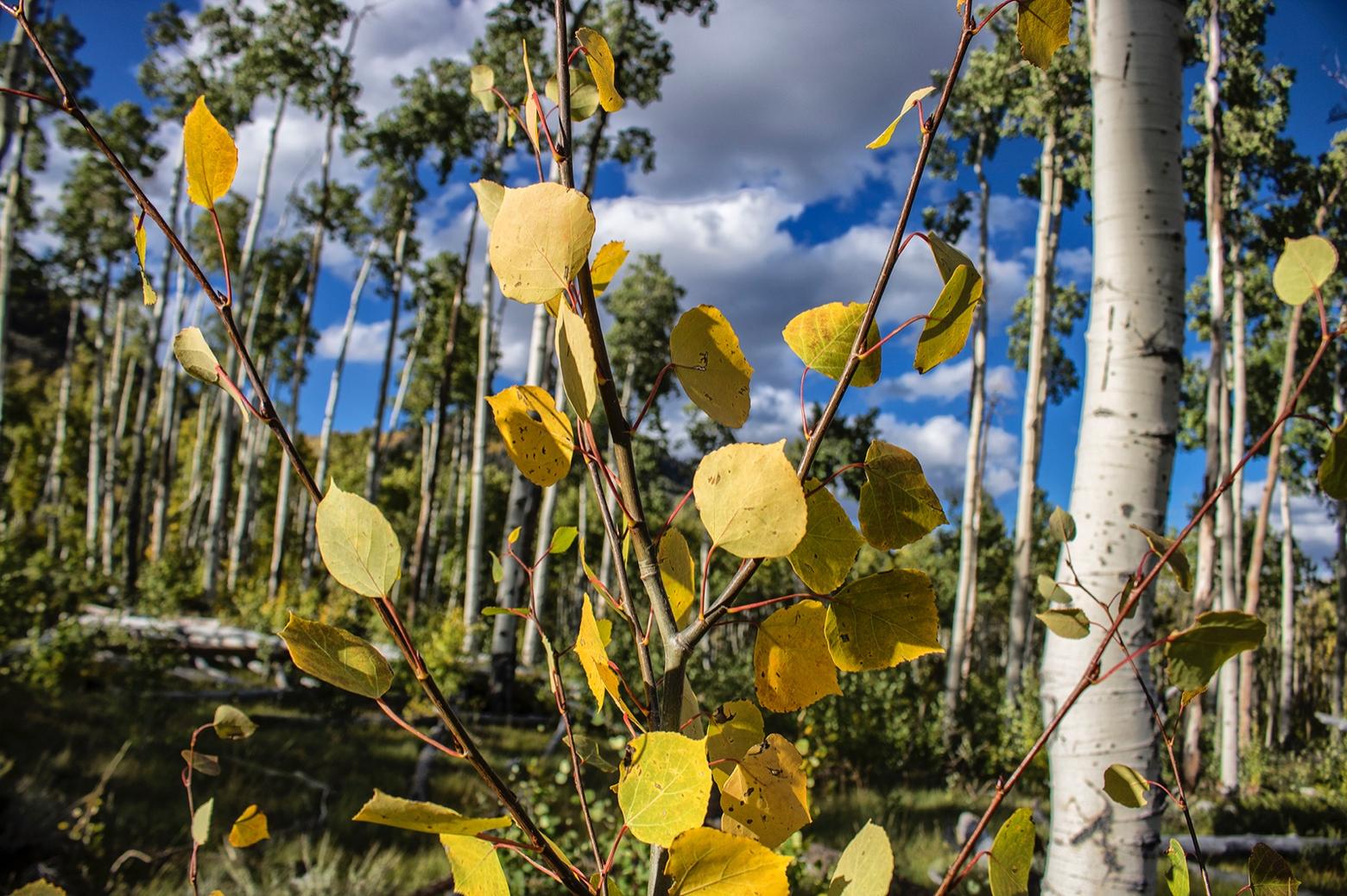 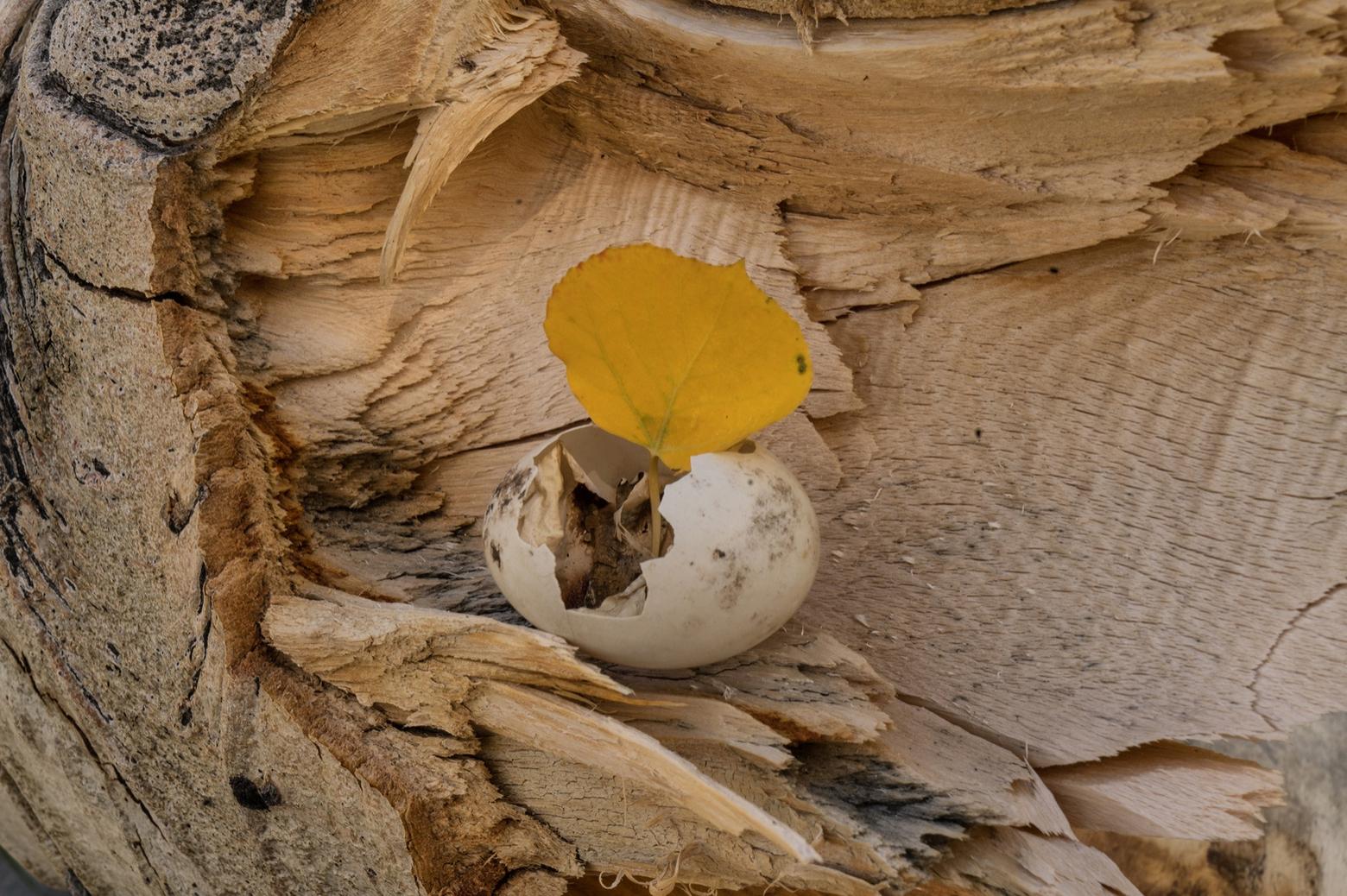 Top Photo—Two Choruses: Leaves flickering in a chilly autumn gale send a soothing note outward to join a wave of sound that echoes up and down the Fish Lake Valley, which could be any mountain valley in the West. Photo just above—One Family, Many Homes: Where an elderly trunk of Pando has fallen, another future has taken flight. Photos by Lance Oditt
As we track and understand the one-tree-forest of Utah, we glean valuable lessons for worldwide species protection—like a hatchling encountering a first breath, self-awareness merges with sustainable practice in a broader world.
In Pando, we recognize ourselves. We move through life with blemishes and beauty marks, thin skin and resolute conviction, bright smiles and quick waves one day and the next day pale bark and arrested growth. In recent decades our grazing patterns, hunting practices, recreational development, and predator eradication, comorbid to a warming planet, have left a long-thriving colossus gasping for breath.

In recent decades our grazing patterns, hunting practices, recreational development, and predator eradication, comorbid to a warming planet, have left a long-thriving colossus gasping for breath.

The massive Pando clone is dying by attrition on our watch.  For nearly a half-century browsing animals have stymied recruitment of new generations.  The grove comprises a grossly skewed demographic: a faltering senior generation stands sentry; all lesser ages are missing.  Like guards at an empty storehouse, chronic overbrowsing has pillaged the grove’s future. 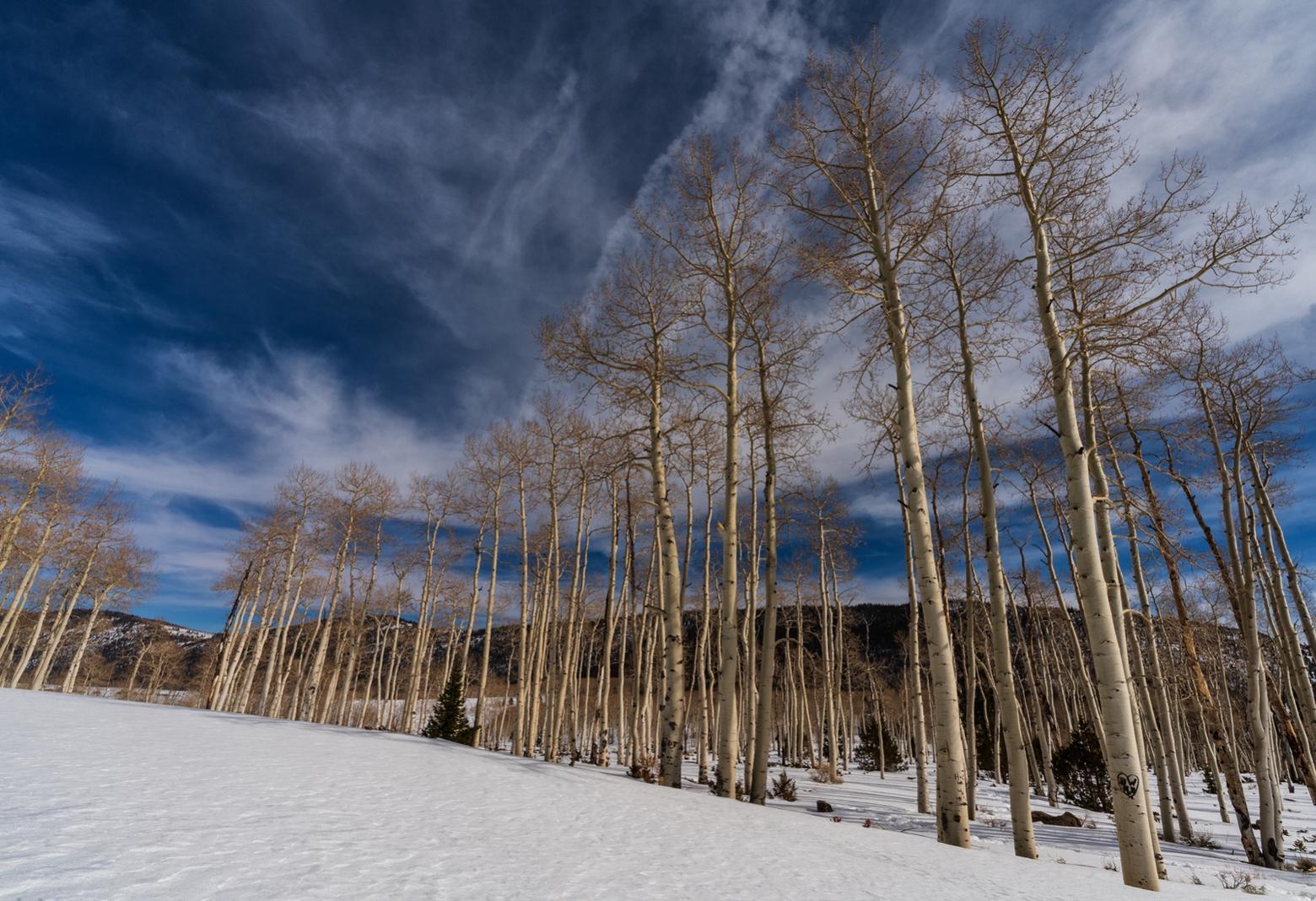 Winter Ghosts: Winter in Pando highlights summer's impact from foraging deer and cattle. Here, only elderly trees remain, leaving architectural voids as an indication of a grove compromised, processes severed, and stewardship unmet. Photo by Lance Oditt
Now, as mature trees confront terminal age, rapid die-off of Pando’s majestic seniors is met with a void of offspring.  Sustenance of trembling leaves and thriving communities follows suit.  The world’s most genetically uniform forest, as signaled by diverging plant assemblages, is beginning to fracture.
In Pando, as in human societies, it is easy to forget vital relations between individuals and communities.  Impulses are shared as mortality portends rebirth.  Vast root networks maintain a single immense colony: e pluribus unum.  Pando’s 47,000 stems with enumerable variation remain linked by DNA. Humans, though genetically distinct, are joined by need, desire, and innate dependence on Mother Earth.  Pando’s paradox implores us to mutually foster communities and individuals.
He is the trembling giant. She is the nurturing spring.

Paul C. Rogers is a biogeographer, forest ecologist, and Director of the Western Aspen Alliance at Utah State University. Dr. Rogers was a Visiting Fellow at the University of Queensland, Australia (2014) and was awarded a Fulbright Specialist scholarship to Mendel University, Czech Republic (2017). Lance Oditt is a photographer at Large Western Aspen Alliance and executive director of Accessibility, Quiet Parks International. You can check out more of Lance's collectible decorative images by clicking here.