A Symphony Of Bodies And Water 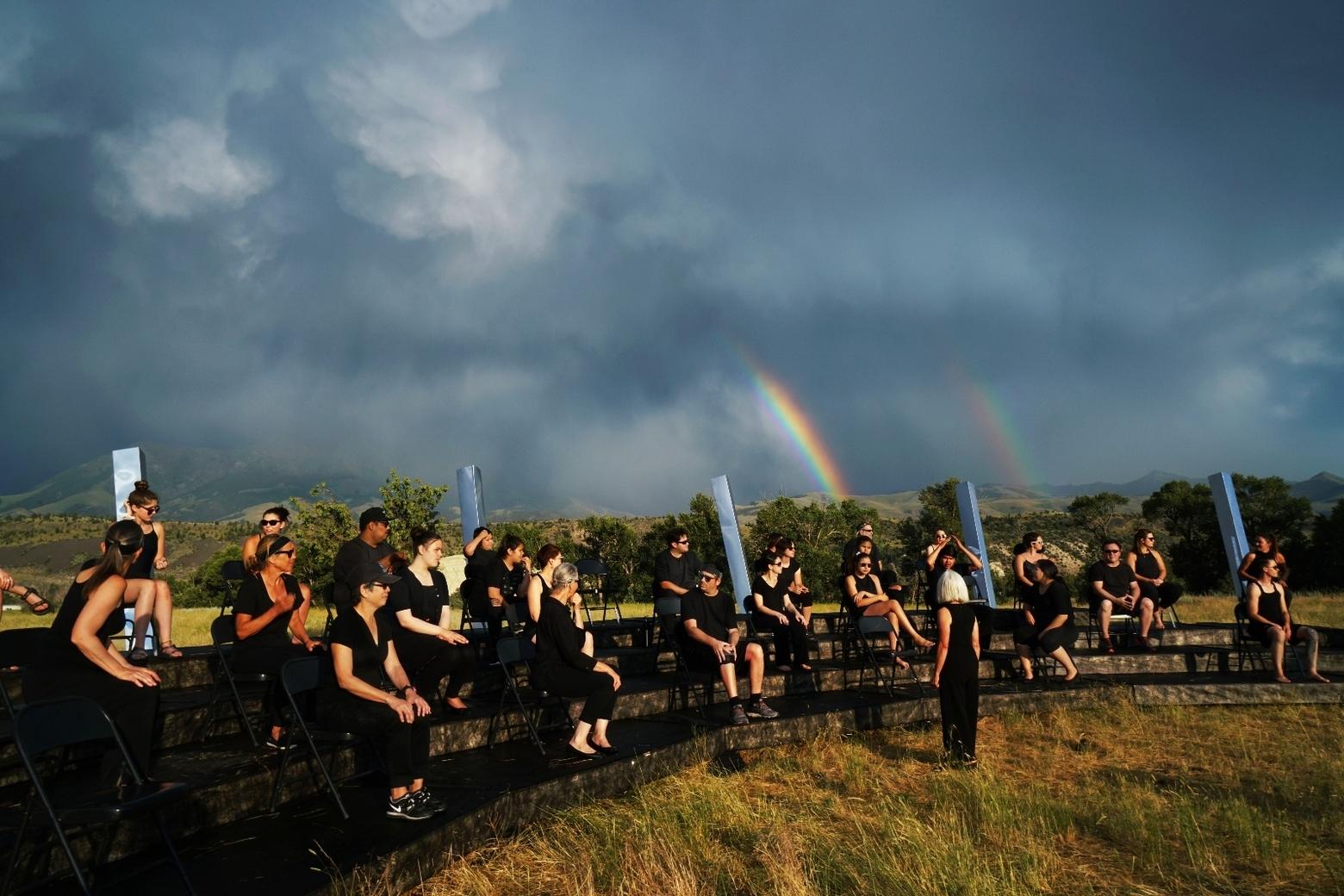 The Symphonic Body / Water performance, with a rainbow, conducted by Ann Carlson at Mountain Sky Guest Ranch in Paradise Valley, Montana. Photo by Elly Stormer Vadseth
Beneath the slanting, low sun, in a field curled against the bend of the East Gallatin River near Bozeman, we sit, held in the cupped palm of a somehow modern, somehow ancient, amphitheater. The mirror-like steel posts angle outward and we, the audience snug on our seats, wait.
Forty-nine performers, each one connected to the waters of the valley and dressed in black, take their chairs slowly. They shrug their shoulders, stand up and then lower themselves again, not in unison, but in a syncopated motion that brings to mind the warm up of an orchestra. The concentrated, silent cacophony of unstiffening bodies anticipating yet absorbed in their own deliberate stories.
Fingers on laps, quickly tapping. Opening hands in front of faces. Arms raised in thanks. Legs crossed and uncrossed. Some divide the hot summer air as if they are swimming. Others raise their arms overhead like divers.
Choreographer Ann Carlson, working with Mountain Time Arts, spent hours in the work/lives of the members, As she enters the conductor space the individuals stop their warm up actions and face her.
With a guiding gestural wave, white homing pigeons ascend. The harmonized sound of wings beating introduces the audience to the performance. The kit of birds circle.
The performers stand. An ovation to beginnings.
Mountain Time Arts produces public art events that explore the history, culture and environment of southwest Montana, according to it its co-founder Dede Taylor. “The WaterWorks series uses art to reveal a variety of perspectives on water use and climate change,” she says, noting that the visual and performing arts can engage the public in ways that public policy discussions do not.
Carlson spent afternoons poolside with four synchronized swimmers and their timed and practiced routines show up in their symphonic choreography. She  walked the fields with a goat farmer and those parts of her day show up in a translation of duties. The student. The scientist. The conservationist. And over the course of the twenty-minute performance we see art in the daily acts of our own lives.
“The Symphonic Body/Water is a social sculpture, a dance performance, a sort of jazz improvisation made of individual parts that become a slice of our collective whole,” Carlson says before the start of the piece. She invites the audience to watch the performers as we would watch our children at play in a creek, or even “how you might watch the creek itself.”
Soon the quiet dissipates and the score of the dance is played by the quaking leaves on a gentle wind; the churn of water as it washes along the banks; the crackled trilling call of sandhill cranes responding to each other, as the dancers respond to each other, as the cadence of the environment interacts with the rhythms of their moves. 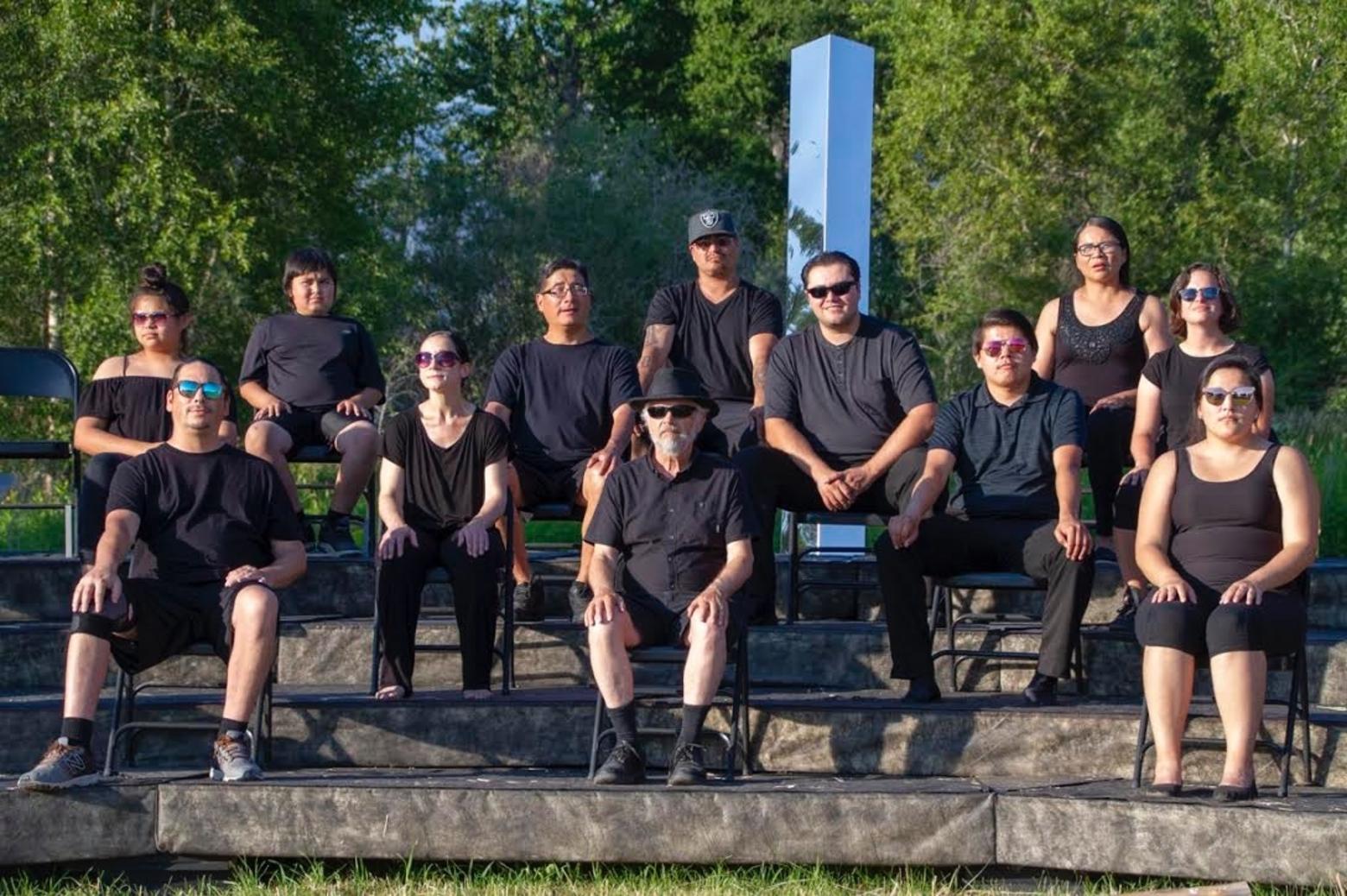 The Symphonic Body / Water, close-up of a section rehearsal. Photo by Mary Ellen Strom
We soon forget the absence of actual instruments. There is no need. This is a celebratory heightening of who we are as compared to what we do and what we believe. It is a choir and we are the congregation. Water plays a part in all of our lives. It is what we are made up of and how we survive. Even the earth beneath our sandals parches, drinks, and is sated.
In the process of building the performers’ unwitting dances, Carlson tells the stories of individual narratives, as in the shepardess who tends her sheep. By committing a half hour every other day Carlson developed a series of fluid movements narrating the start of her day.
During the performance Sales calls out “girls.” It is the same way she calls to her flock, who in turn answer with sounds of their own and follow her to the pasture. Now when Sales calls out “girls” the performers heed her voice. At times Sales bends down as if to pull something from the ground: an interpretation of her daily need to move fences and open barbed wire enclosures.
Those pieces of utilitarian movements become part of the whole.
It is Carlson’s deep observations of each person’s unique conversational gestures, a combination of watching labor and awareness of body language that illuminates the Symphonic Body performance. These portraits become a map of their day, as well as a brocade of memories.
When Carlson met with Carson Taylor, former Bozeman mayor, water planner and Dede Taylor’s husband, she spoke with him at his home. Recently retired from public life, he moved around his house winding all his timepieces and adjusting the weights of a cuckoo clock. His movements in the piece echo his attention to fine detail as well as a bit of discomfort with his new freedom. The gestures, meticulous and poignant, reflect what it’s like to be a part of a whole, yet at times separated from it.
Several Native American tribal members and scholars who participated in the piece; Frank Stewart shared some of his grandfather’s Plains Indians sign language.
“One was the slapping of the hip with the left hand while the other hand wiggled an invisible doorknob,” Carlson says, “that means, Hi, How are you? It was the only way Stewart communicated with his grandfather when he was a boy, and it became part of his portrait.” 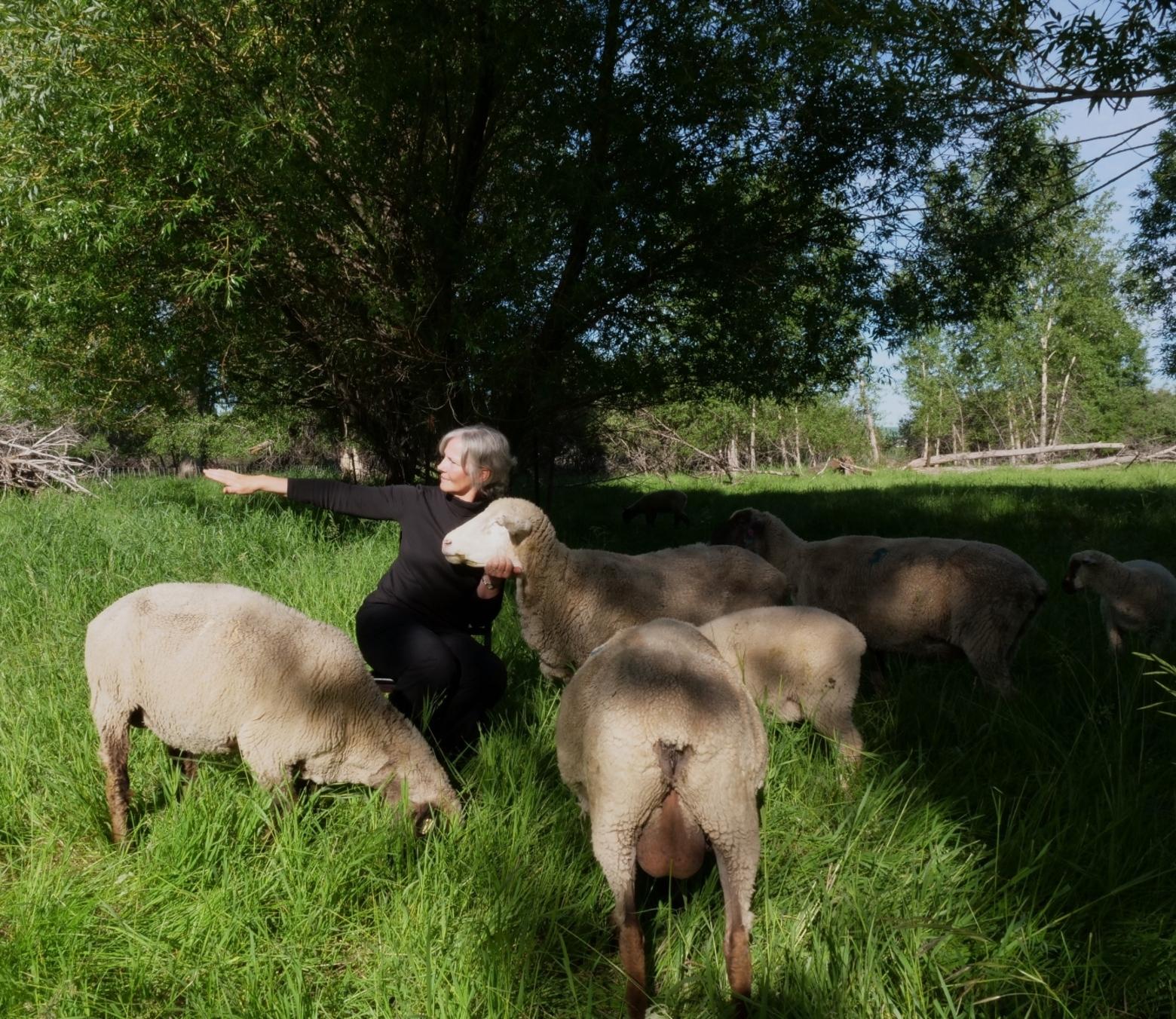 Shepherd LaRae Sales creating her gestural portrait at her Manhattan, Montana ranch with choreographer Ann Carlson (not pictured). Photo by Mary Ellen Strom
In this way, small movements, practiced and intuitive, embroider our lives to create fuller meaning, transforming conversations into histories. “It becomes a personal folkdance, but it is imbued by the person’s own life. It’s an unveiling of unconscious expression. Where do those gestures come from? Is there a kind a calling to our ancestors? And if our gestures pass through us, do they reference our own cultures?”
Watching the Symphonic Body, we the audience, suddenly become very aware of our own movements, answering instinctively by crossing our legs, or settling into our chairs. Within the constructed amphitheater we are the recipients of the generosity these performers offer, telling us their lives in movement. And we, in turn, become the performers: clapping, smiling, standing up to give thanks.
After a while the gestural dance, contemporary and traditional, modern and primordial, takes on something bigger than its individual parts. Like an orchestra, the rhythms and high notes combined to envelope meanings both within the performance and without, as if the breadth of arms and legs crossed the field between us. And we embraced it.
As the shepardess said to Carlson at the end of the piece, “I felt like it was my past, my present and what might become my future.”
EDITOR'S NOTE:  The next WaterWorks summer performance is Cherry River, Where The Rivers Mix on August 23-24 at Missouri Headwaters State Park. The Missouri headwaters are formed by the convergence of the Gallatin, Madison and Jefferson rivers. 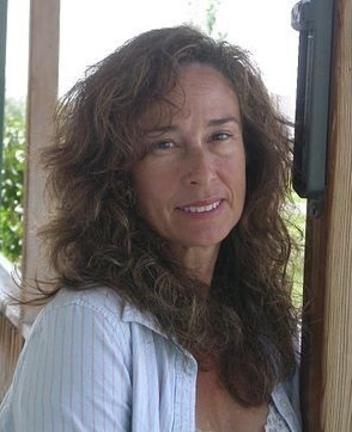 Michele Corriel lives and works in Montana's scenic Gallatin Valley, surrounded by seven mountain ranges. Her work is as varied as the life she's led, from the rock/art venues of New York City to the rural back roads of the Rockies. With her fourth book just out from Leap Books, she's also a prolific freelance magazine writer with articles regionally, nationally and internationally.
Read more