What If The Airport In Grand Teton National Park Went Away? A Guest Essay

Busiest airport in Wyoming and only major commercial one located inside a crown jewel national park, Jackson Hole Airport has transformed its setting and the valley 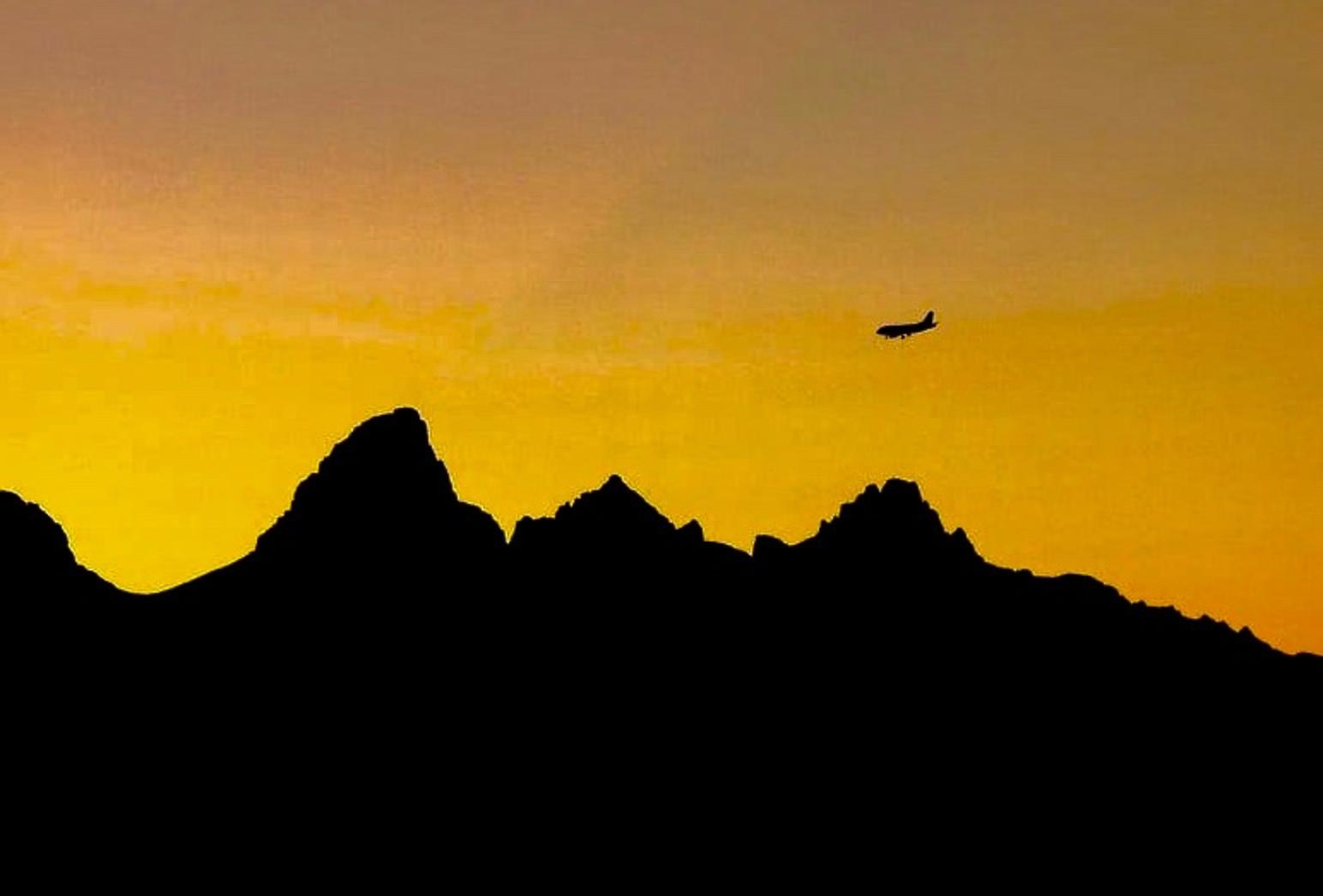 A commercial passenger jet lands at Jackson Hole Airport. Photo from Jackson Hole Airport Facebook page
An Op-Ed By Robert Frodeman
The Jackson Hole Airport is closing this spring. It will be shut from April 11, 2022, until June 27, 2022. That’s if construction goes according to plan, a thought that sends shivers down the spines of locals familiar with local construction projects.
But what if we just shut down the airport permanently?
I speak in jest, but this was on the table on several occasions in the past. Arguing that a national park is no place for an airport (the Sierra Club sued on more than one occasion), there have been suggestions that we rely on the Idaho Falls airport (100 miles away), put the airport in Driggs (with a tunnel passing beneath Teton Pass), or place the airport in Daniel Junction (65 miles away in Sublette County; this was Laurence Rockefeller’s preference).
It’s fun to speculate on these alternative timelines. Imagine Driggs or Bondurant rather than Jackson as the home of jet-setting billionaires. Of course, these suggestions were only possible before airflight became a major way for people to reach Jackson. In 2021 the airport saw more than a half million enplanements. Jackson now has direct connections to 21 different destinations by a wide range of carriers – American, Delta, United, Alaska, Allegiant, Frontier, and Sun Country Airlines. Western Airlines first came into Jackson in 1941, but commercial flights into Jackson have been continuous only since 1959 with service by Frontier. 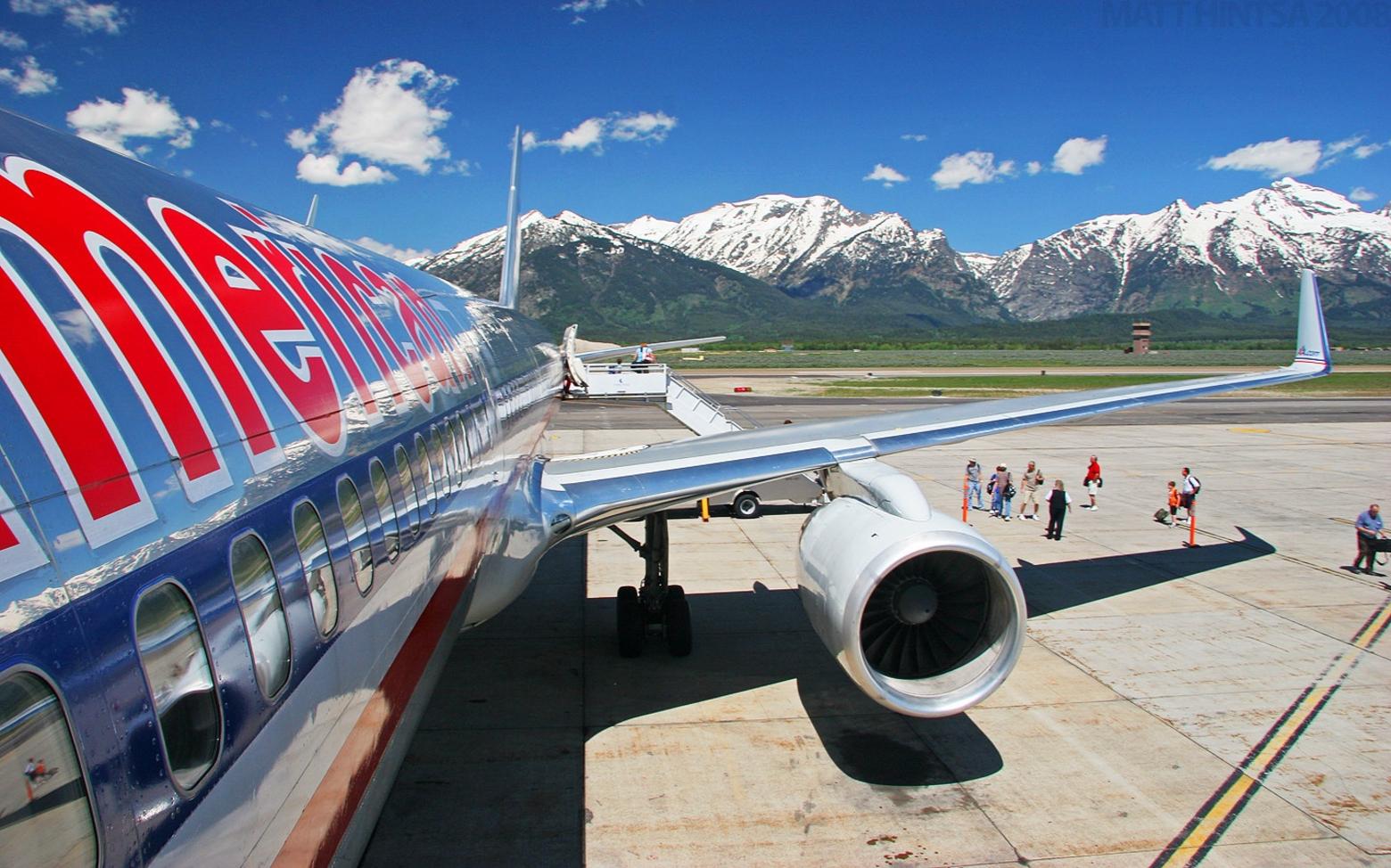 Passengers get off a jet at Jackson Hole Airport. Photo courtesy Matt Hinta (CC by-NC-NC 2.0)
The irony is that for all the complaints about this being the only airport located within a national park, its existence predates the park. It began as a dirt landing strip in the 1930s, after a couple cowboys cleared off some brush and the owner of the land (Rockefeller) looked the other way. Grand Teton National Park was created in 1929: after locals protested a federal takeover of the flats the park consisted of only the peaks and the lakes. It took until 1943 for the area in front of the Tetons to be designated as Jackson Hole National Monument.
The next year Teton County Commissioner Clifford Hansen pushed for its abolishment, arguing that it “has little to add to the picture of the West." Then again, Hansen’s ranch and grazing permits were affected by the creation of the monument.
In 1950 the peaks and the flats were merged into one park. The airport now had a new landlord: in 1955 the National Park Service leased the airport site to the town and county. The Park Service has turned down lengthening of the landing strip to 8000 feet (this spring’s construction will put down a new bed for the current 6300-foot runway, not extend it). Neighbors and hikers complain about aircraft noise, and the sex life of the sage grouse is disturbed. But the community has reached an equilibrium with the existence of the airport, notwithstanding the $50 taxi charge to and from town.
So the airport will stay. But rising numbers raise another question: when enough is enough? More than a half million people now fly here each year. Do we want it to be 750,000? A million? Is there a limit to the number of flights and people we want to bring into Jackson Hole?

So the airport will stay. But rising numbers raise another question: when enough is enough? More than a half million people now fly here each year. Do we want it to be 750,000? A million? Is there a limit to the number of flights and people we want to bring into Jackson Hole?

Some say we should continue to grow visitation—during the shoulder seasons and winter months, when hotels and restaurants aren’t yet at capacity. Of course, the parks are harder to visit at these times. And many locals look forward to a break from the summer crush, which is becoming less noticeable as the tourist season grows longer.
A local business group called JH Air was founded in 2002 to encourage more direct flights into Jackson across the winter months. The trade group uses government grants and business contributions to provide minimum revenue guarantees to the airlines. In return, contributing businesses get discounted ski lift passes. The town of Jackson and Teton County each contribute $15,000 annually toward encouraging flights into Jackson, part nearly $342,000 of local government grants going to the airlines in 2019.
JH Air and the Teton County Travel and Tourism Board have pursued a traditional view of the common good – continued growth in the economy via more enplanements. In recent years, however, people have increasingly claimed that Teton County suffers from overtourism both summer and winter. This raises the question of whether this support is still a desirable use of public money.
This should become part of a larger discussion, where Jackson, Teton County, and our other local jurisdictions (e.g., the national parks and national forests) raise questions of managing (that is, limiting) visitation. 330 million Americans, and untold numbers of foreign visitors once covid recedes, can’t all be squeezed into the Greater Yellowstone Ecosystem.
The Endless Frontier of our forefathers is no more. Adjusting to this new situation implies questioning assumptions about the desirability (and possibility) of endless growth. The upcoming Sustainable Development Management Plan should spur a conversation whose time has come.
EDITOR'S NOTE: A revised version of this op-ed was published in the Jackson Hole News and Guide on January 19, 2022. What do you think? We welcome your response and will consider publishing it here. Send it along by clicking here. Robert Frodeman, who lives in Hoback, Wyoming, writes about technology and the environment. He is working on a book about the Greater Yellowstone Ecosystem. Founding Director of the Center for the Study of Interdisciplinarity at the University of North Texas (2008), he has also held academic positions at the University of Colorado and the Colorado School of Mines. He also ran the Socrates Untenured series at the journal Issues in Science and Technology from 2017 to 2021.