What Motivates Some Millennials To Try To Do Good In The World?

In his regular column, "My Father's Son", Liam Diekmann of Bozeman, Montana Tells Stories Of How Fishing Got Him Hooked On Conservation

These are questions on the minds of many parents and grandparents in America: what’s on the minds of young Millennials? What motivates them?  What convinces some to get involved with making a positive difference in the world and not others?  In Greater Yellowstone, what’s the key to growing home-grown conservationists?


Every five years since the late 1950s, the U.S. government compiles a report on the number of recreational hunters and anglers in America.  The latest iteration pegs the number of people who fish in fresh and saltwater at close to 47 million.  The tally of those who flyfish is pegged at around 4.5 million and it includes those who may only go to a river once a year.


The late great flyfishing legend Bud Lilly, who for decades operated Bud Lilly’s Fly Shop in West Yellowstone, was a major force in conservation, helping to pioneer the concept of catch and release. Lilly always believed, and studies bore him out, that when the imprint of nature is made on a child early, it tends to last life-long.


With their sons Logan and Liam, Lisa Diekmann and her late husband, Alex, infected their boys early with biophilia through a variety of cherished family activities, including Nordic skiing, mountain biking and heading to waterways with flyrods in hand.  Their spiritual reverence for stepping into a stream is one to rival the Macleans.


Today, Logan Diekmann skis with the cross-country team at the University of Utah that last year was crowned NCAA champions. Liam is in his senior year at Bozeman High School wielding a laptop keyboard as well as he can land a Royal Wulff on top of a pool where a wild trout lurks.


Young Mr. Diekmann, who is considering pursuing a career in conservation just as his father before him, doesn’t claim to speak for an entire generation. But he is puzzled at why so many of his contemporaries who were raised in the Rockies don’t have a stronger affinity for nature.


Diekmann credits fishing with getting him hooked and it is affecting the direction of his life. His column, My Father’s Son, appears in both Mountain Journal and the online angling e-zine MidCurrent.


You will enjoy the tales Liam shares of his angling adventures as a Millennial, the insights he’s gleaned about family bonds forged experiences in the backcountry and how a young man ponders the notion of thinking beyond his own generation.


MOUNTAIN JOURNAL: There aren't many outdoors columnists your age out there.  Fascinating is that some of the biggest fans of your writing over the last year have been old guys in middle age and beyond who relate to your stories.  What do you enjoy most in writing about flyfishing?


LIAM DIEKMANN:  The number one thing I enjoy writing about fishing is being able to tell stories.  Ever since I was little I have always been able to tell stories better in writing rather than physically speaking them.  Hopefully I can bring stories to life for readers here in a way that I’m not able to do while talking.


MOJO:  You’ve no doubt dealt with the eternal angler’s lament. What is the biggest fish you ever hooked that got away and how did it happen? 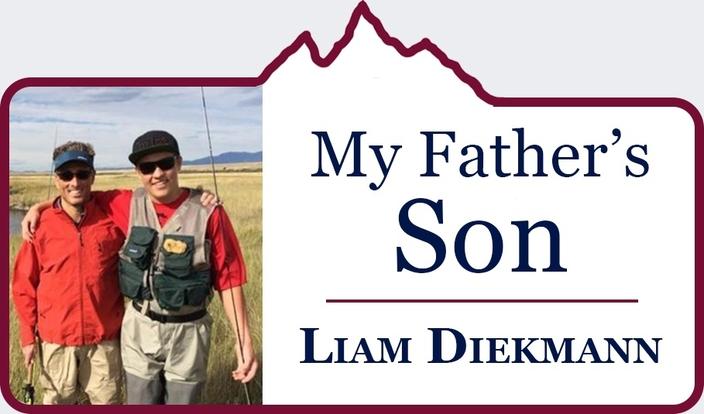 DIEKMANN: One of the biggest fish I lost was on the Granger Ranch while in the company of my Dad, Alex, brother Logan, and Jeff Laszlo, owner of the Granger.  It was along a bend in the creek that remains one of my favorites. It stretches for about 30 feet and has a small pool but a large hang over.

MOJO:  If you had to do it all over again, would you play the fish differently?


DIEKMANN: Yes, I most definitely would. I was using a large size 6 grasshopper pattern and a monster of a fish smashed it, but I was young and did not have the experience to know how to let the fish run and play with it. So the tension was tight and the line snapped. If I could do it over again, I would be more patient and respect the fish more, let it run as far as it wanted to go and kind of tack him in.


MOJO: You’re going to also be demoing and reviewing fishing gear for Mountain Journal.  What are some things at the top of the list you'd like to field test?


DIEKMANN: I would love to try a cane/bamboo rod, mainly because I broke my last graphite rod and can’t get it replaced. I’ve had discussions with a lot of friends about bamboo rods and they’re interested in buying one themselves but they want to wait for my review to come out first. I’ve also been considering a Hatch reel, because everyone at Yellow Dog Flyfishing Adventures, where I had a summer internship, highly suggested I try one out.


MOJO:  What do you think is most important in getting environmental issues to ripple with Millennial-aged young people?


DIEKMANN:  First it’s getting them outside the way I did with my Dad. And then helping them understand why it’s important that they get involved with trying to protect rivers so that future generations can experience them the same as they are. And then they need to help spread the word why having a healthy environment matters.


MOJO:  Your Mom and Dad both worked in conservation—your Dad at the Trust for Public Land and your Mom as the first executive director of the Yellowstone Park Foundation, today Yellowstone Forever.  What are some of the lessons you've learned from them?


DIEKMANN: To be honest I can’t begin to mention them all here. They’ll be with me the rest of my life. Those lessons are things I hope to write about in future columns.
Increase our impact by sharing this story.

GET OUR FREE NEWSLETTER
Never Miss A Big Story!
Tags: Liam Diekmann, My Father's Son