Jackson Hole nature writer Susan Marsh returns. She ponders her long ago dreams of youth and how the wilds still bring her back to where she wants to be 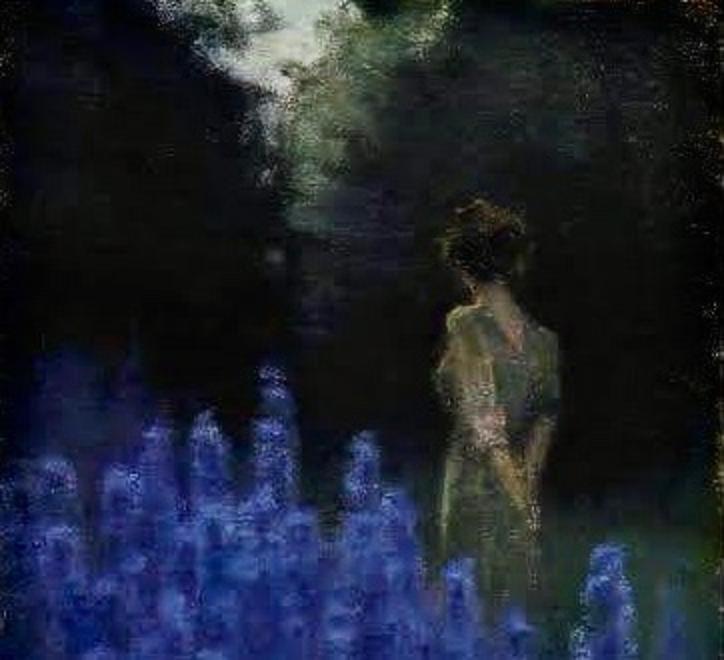 Image above is an oil painting, "Another Blue Afternoon," by John Felsing. To see more of Felsing's works, go to www.pinterest.com/rickstevensartjohnfelsing
by Susan Marsh
I haven’t been writing much lately, and as usual I have excuses, but underlying them all is a bit of a depression. These days we all have good reasons to be fretful, sad, and anxious, and I’m working on striking a balance between acknowledging the feelings and seeking a bit of joy at the same time. I am not always successful.
Part of it is widowhood and the recent death of my elderly feline friend. Part of it is the season, what some call spring and most of us call mud season. I like mud season: it’s spring break, quiet in town, and the hills open their south-facing slopes to the sun. Buttercups and turkey peas appear.
But this year the predictable Easter snowstorm lasted a week and showed little sign of letting up. Yes, we need the moisture and I am glad for that heavy wet snow that is nearly impossible to push out of the driveway.
Yet my mood matches the slow steady fall of the flakes outside my window. I don’t write essays for anyone else to read when I’m in a dark mood, for I want to be encouraging and uplifting with my words.
The untamed life around me always helps: a daily infusion of wonder and beauty, a source of oxygen to the brain even on a slow meditative walk, and reminders that the season really is progressing. 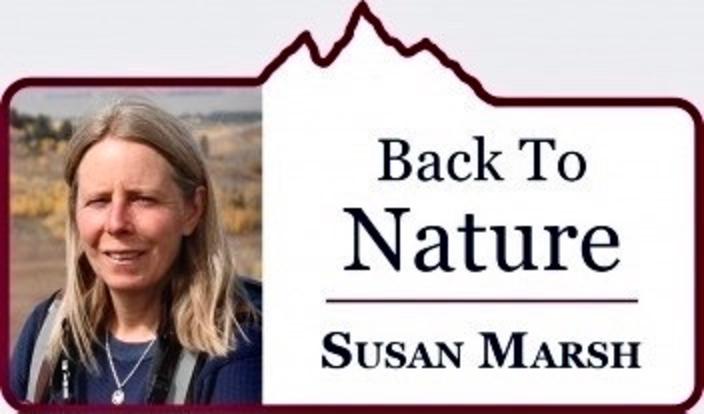 In Jackson Hole we have been enjoying a major fallout of rosy finches and juncos, along with many other species. When I meet up with friends the first topic of conversation is the number crowding bird feeders or sweeping in unison along the lower slopes. I’ve usually quit feeding by this time, as the bears are up and the birds can find their own food, but this year, even the robins want a little sunflower seed.
The birds bring me joy. I study the variety in a flock of rosy finches, each with its particular coloring and pattern and personality. Birds never feel sorry for themselves and watching them takes me away from myself and my dark moods.
Another thing that helps is to put the temporary mood into the perspective of a lifetime. I live among the birds, forests and mountains of a place that has not yet been overrun by humanity. What good fortune! So many braided trails have led me to this point.
The trails we take can be nothing more than an intermittent string of cairns, stacks of stones perched on peaks, beacons for our goals or hidden in the fog. Or the trail can be impossible to miss, well beaten in by many feet before, reassuring in the way the fogbound cairns will never be.
During a lifetime we chose one or the other, in sequence or at random, depending on our inclinations. The most adventurous among us leave all trace of prior routes and strike out alone to the ridge or into the deep forest, across the desert or along the shore, where we might find a special boulder or fallen log to pause for a rest and to wonder if anyone has ever been to this precise spot before.

The trails we take can be nothing more than an intermittent string of cairns, stacks of stones perched on peaks, beacons for our goals or hidden in the fog. Or the trail can be impossible to miss, well beaten in by many feet before, reassuring in the way the fogbound cairns will never be. During a lifetime we chose one or the other, in sequence or at random, depending on our inclinations.

As a child I often imagined that I was the first person to arrive at a particular place, and later, after a good thrashing through the slide alder and devils club, I might have been correct, at least when it came to my fellow humans.
But looking more closely, I will no doubt find the tracings of many passages. My footprints are as temporary as my moods, light impressions in the duff along with those of elk and moose and bears.
Here I find a browsed red-twig dogwood with fist-like knots of branch stumps, last year’s robin nest in a hawthorn, a hieroglyph of insect trails under the peeling bark of a fallen log. There I find a sapling skinned by antlers, a pile of spruce cones where a red squirrel enjoyed a meal, a rotten log plundered by a bear for carpenter ants. Aspens chewed to pencil points by beavers, a round nest cavity in a snag, the dried carapace of a cicada that emerged into flight.
If I return along the same trail, there might be tracks already covering mine. They tell me: you are not the first, you are not alone.
We may map out a life’s trail early on, leading to that cairn or mountaintop, but unforeseen complications arise. Recent deadfall from a wind storm requires a revision of the route, and if impenetrable enough it will force us to turn back, start over, choose a different path. Obstacles turn into opportunities and lessons learned. A blocked trail may not be necessary for a change in plan, you simply decide that this isn’t the way you meant to go after all.
Does everyone (or anyone) remember school teachers and other adults kindly asking you as a child, “…and what do you want to be when you grow up?”
It seemed an odd question to me as a ten-year old, and I don’t remember my response, if any. But if I’d taken the question literally the correct answer would have been that I wanted to become an adult.
Of course, this is not what was being asked. What do you want to be meant what do you want to do—job-wise. My true answer, in either sense of the question’s meaning and never spoken aloud, was that I didn’t want to become anything other than what I was, a child.
I could not imagine any path that would lead into my personal adulthood. Most of the adults I knew, including my parents, seemed to have lives filled with chores and duties and worries. They allowed themselves few interludes of rest—the occasional stroll along a beach or weekend camping trip—during which they appeared to be content, living in the moment. In other words, as if they were carefree children once again.
Unburdened by the troubles of adulthood, I could be my true self every day. I walked to school through the woods and played there late into the evening after finishing my homework. My parents argued and drank gin. Why would I want to grow up?
By the time I was preparing for college, I had a few vague ideas about what I wanted to be. Marine biologist was first on the list, followed by fire lookout. I imagined myself hunkered on a mountaintop in a cairn-like shelter keeping an eye out for smoke in the forest below. I dreamed about living in a cabin in the woods, not wondering what I would do to earn my keep. 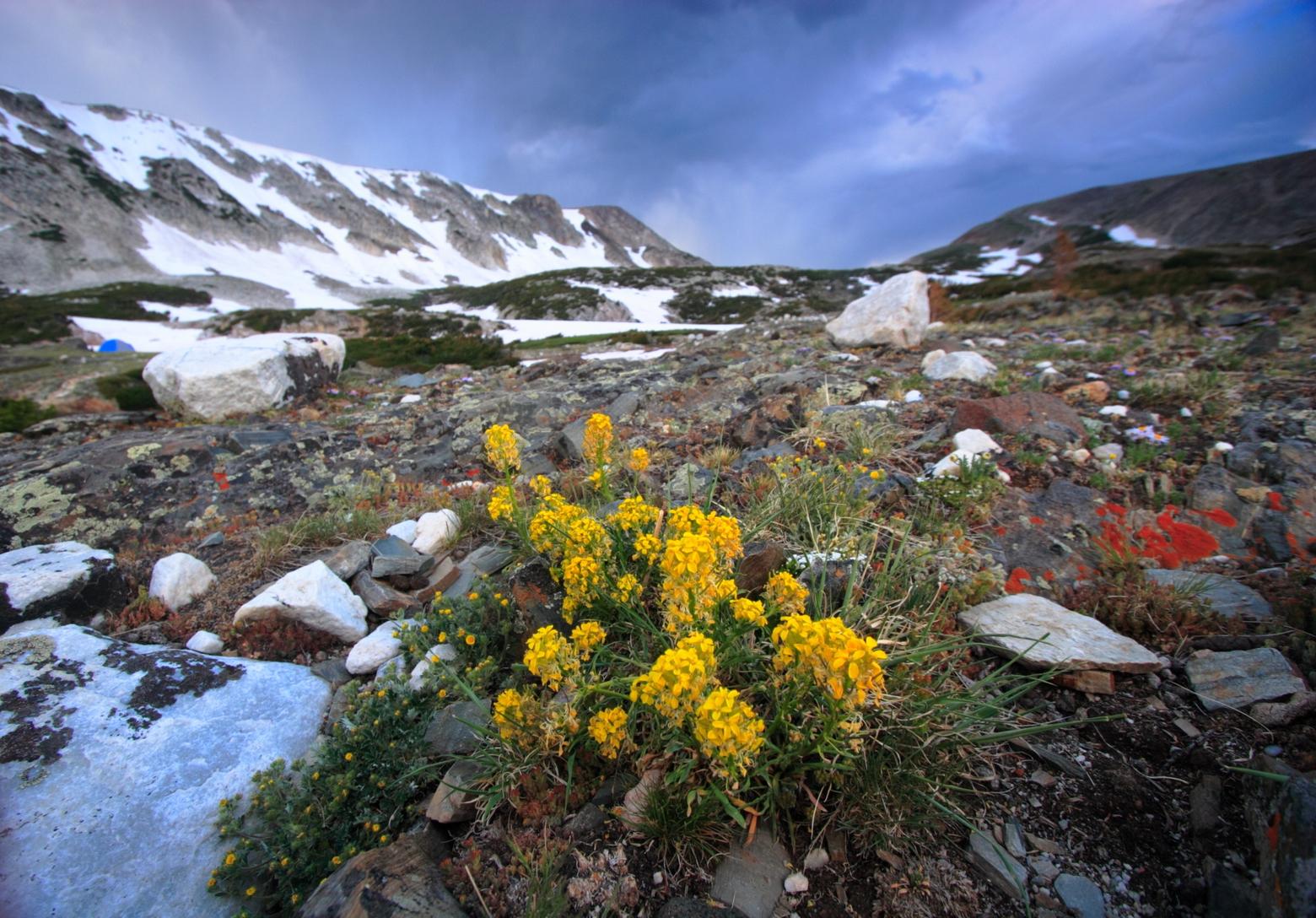 A first blush of hardy wildflowers in the mountains of Wyoming. No matter how how formidable a winter, eventually new live defies the snow and all trails lead back to nature. Photo Shutterstock/ 73301875
In high school, among the many aptitude tests and assessments to which students submitted was an inventory of our “interests.” (What is a high school junior interested in besides romance, sports, and social events, none of which were on the list?)
A few weeks after we took this test our reports were handed out, each one a matrix with highlighted categories of occupations for which we were most suited. How these were derived remained a mystery, but we were eager to compare our results with those of our friends.
While I was daydreaming about biology and fire detection, the list of jobs marked in bright yellow on my report included nothing of the sort, nor anything of the slightest interest. Had my answers been mixed up with someone else’s? The results of my assessment continued to perplex me until I compared them with those of a boy I knew: his list of potential occupations was different than mine. His list included things I was interested in. Mine did not.
Perhaps this explains the crooked dead-end trails I followed after high school. I dropped out of college after my freshman year, during which I learned how few my options would be without skills or an undergraduate degree. When I returned to the university I changed majors, graduated, and my life took a number of twists influenced by events that felt very random at the time.
What stays with me now is not the crooked trail I have taken, but its apparent serendipity. Those jack-strawed deadfalls across the path turned me in new ways, as did glimpses of sunlight through the trees. They came in various guises: something I read, a notion that occurred out of the blue, a professor whose love for her subject influenced me, or meeting someone who suggested I look into a career in a subject I had never heard of.
With its many dead-ends, wrong turns, and bushwacks through the slide alder, my trail has in fact led in a general direction and central theme, that of caring for and speaking up for the earth’s beauty and diversity and wonder. The birds at my feeder and the migrating cranes, currently hunkered in the snow over their newly laid eggs.
I see now, as if from the vantage point of a peak and looking back onto the switchbacks that brought me here, that what I have done matters less than how I did it. I hope that I have largely employed integrity, purpose and kindness. The people I helped, befriended, argued with, and butted heads with each taught me something valuable, that my relationships with them mattered more than the work itself or my personal achievements. And the wild and wondrous places that I love matter most of all.