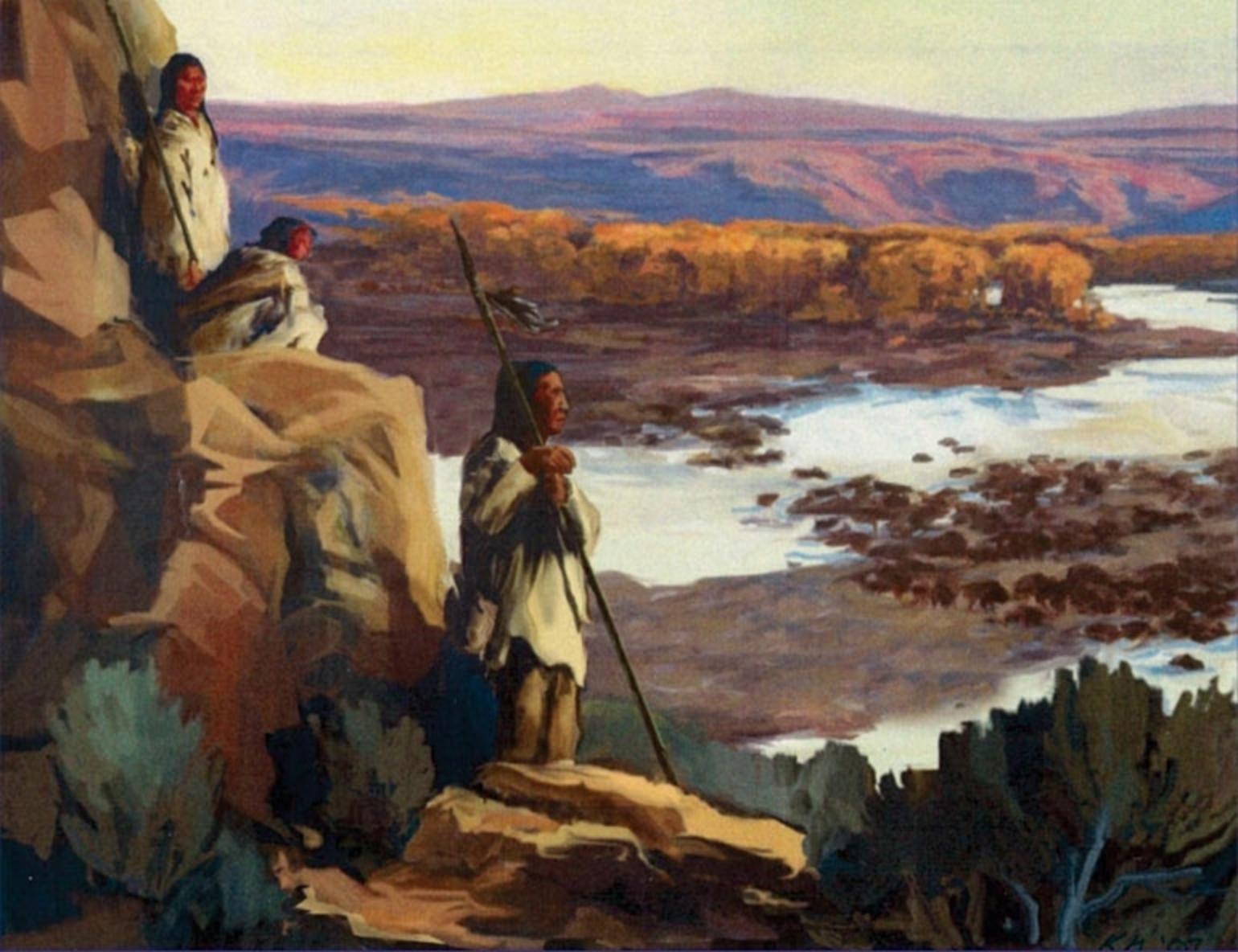 Clovis complex hunters in Montana scouting a herd of giant bison prior to staging a hunt. Illiustration by Kit Mather/used courtesy Daniel Smith/oolitemedia (http://oolitemedia.com)
Animals move across landscapes and disperse in a variety of ways. When they grow up, they move away from home to find a place of their own. Some move to migrate, such as elk migrations from summer range in the high country of Yellowstone to winter range in lower elevation valleys. Evolution has generally bestowed a reason. Move or perish, at an individual or population level.
Still another type of movement occurs over longer scales of time and distance—in response to changing climates and habitats. This has become a special area of interest for my wife, April, and I and our associates at the Craighead Institute. April has devoted years to studying the status of pikas in the high alpine. And a few years ago I wrote an assessment about biodiversity in the Gallatin Range, where the public is pondering how much protection from additional human impacts are necessary to maintain the resilience of that remarkable piece of the Greater Yellowstone Ecosystem, given the deepening impacts of warming temperatures over time.
To put things in perspective, it may help to step way back in time to the end of the last ice age, about 11,000 years ago. Back then the climate was warming, just as it is now, but not as rapidly, and it was a lot colder to begin with. Two huge ice sheets covered most of North America north of us—the Cordilleran Ice Sheet and the Laurentide Ice Sheet.
As the ice sheets melted, a passage between them widened called the Mackenzie Corridor. As this became passable, animals and plants began to move north and south. Many species that had spent the Wisconsinan glaciation in what is now Alaska moved south. Those included grizzly bears, wolves, and humans. 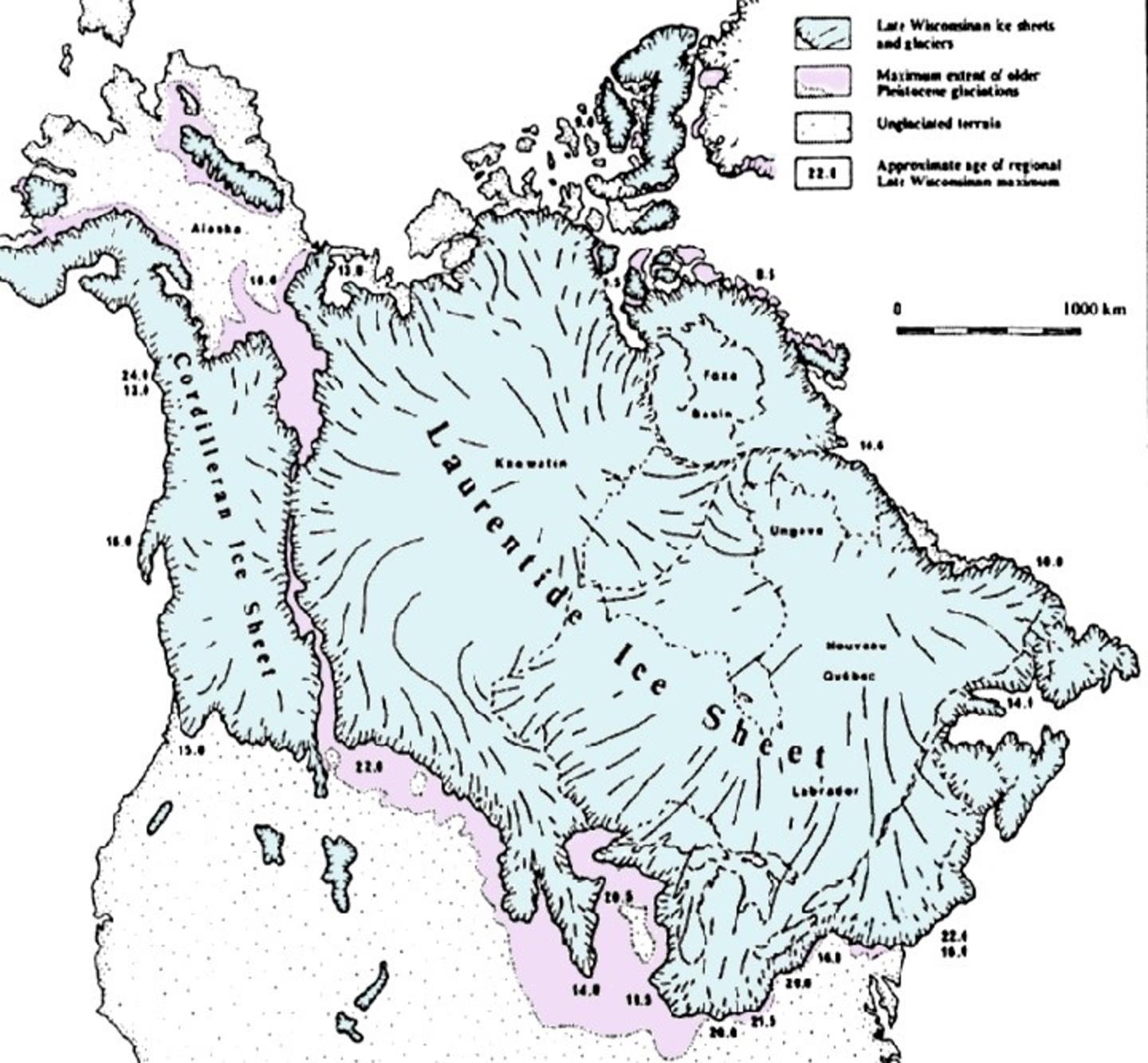 One of the earliest known Clovis burial sites can be found not far from Wilsall, Montana, where a child of obvious importance was buried with at least 100 tools and artifacts. This site is called the Anzick Site after the owner of the ranch on which it was found. The child’s people, ancestors of Native Americans, had presumably followed the herds of wildlife south about 13,000 years ago along the Mackenzie Corridor.
The Mackenzie Corridor lies along the eastern front of the Rocky Mountains; the eastern boundary of what we call the Yellowstone to Yukon region.
The climate changed slowly 13,000 years ago. It is now changing much faster. At that time however, it was changing slowly enough so that plants could move north as the glaciers receded and uncovered bare rock and glacial silt. Soil and tundra plants followed the glaciers and were in turn followed by coniferous tree species and later by deciduous trees. As plants were established, animals were able to move as well.
Species moving south to reach warmer climes intermingled with species moving north to stay in their optimal niches. The land south of the ice had been populated with mastodons, saber-toothed cats, black bears, giant short-faced bears, and elk. Grizzly bears were probably found north of the ice at this time, as were moose. They may have traveled south together, but humans probably traveled much faster. Humans may have also found their way south during earlier times in some places, but new groups of them almost certainly travelled down the Mackenzie Corridor 13,000 years ago. Within the traditions of some tribes, it’s known as The Old North Trail. 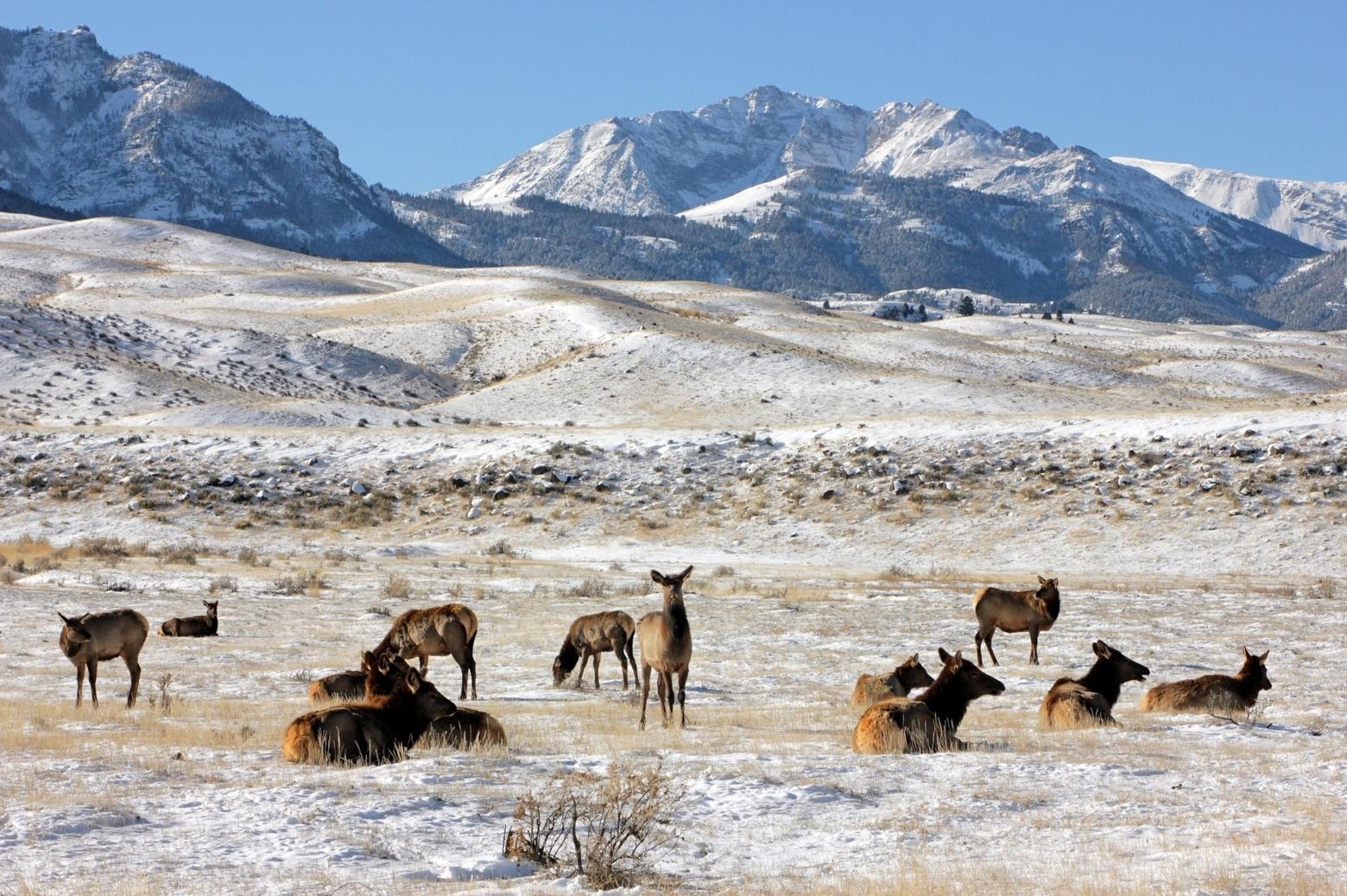 Cow elk near the north entrance of Yellowstone National Park with the 10,968′ Electric Peak rising in the background. Electric Peak marks the start of the Gallatin Range's long northward trend towards the Gallatin Valley south of Bozeman. Diane Renkin / NPS
This was a fascinating time in the history of earth, and there has been much research and speculation about how species interacted, why many species went extinct shortly thereafter, and how these ancient landscapes helped shape the psyche, behavior, and physical attributes of modern day humans.
In evolutionary time, this was not long ago at all, and we are basically the same people who wandered down below the ice and spread out across the lush landscapes they encountered. The Clovis hunters used elk antlers for tools and art; they probably did not find elk to hunt until they got south of the ice, and they certainly hunted deer, antelope, and other species that are still around today. They were known as mammoth and mastodon hunters.
The Clovis culture disappeared rather suddenly, but their genetic history remains in modern Native Americans. Two excellent books reviewing the fossil record and human migrations include the scholarly “After the Ice Age” by E.C. Pielou and the more serendipitous and personal “In the Shadow of the Sabertooth” by the noted Paradise Valley-based conservationist and writer Doug Peacock. [I link these books to Amazon for convenience, but you can find them through your favorite bookseller, which I recommend].
As the climate continues to change in the future, plants and animals will attempt to shift in distribution from south to north in response to optimal conditions for survival and reproduction. Coniferous trees will continue to move north until they meet ocean barriers; deciduous trees will follow. Plants and animals further to the south will try to move north to finder cooler climates. This time however, they will encounter barriers that have never before existed; these are the barriers caused by human developments.

The vast pattern of human alterations to the landscape and to plant communities is often referred to by the benign term ‘the human footprint’. In reality it is now more like "the human epidemic."

The nature of those barriers may change somewhat in response to the changing climate, but they will remain in place.  Roads, cities, agricultural development (though not necessarily the types of species being cultivated), and other habitat alterations will not move south to north, and it is certain that they will prevent many plants and animals from doing so as the climate warms. This vast pattern of human alterations to the landscape and to plant communities is often referred to by the benign term ‘the human footprint’. In reality it is now more like ‘the human epidemic’.
If species that need cooler conditions to survive are blocked from shifting their distribution northward, the only other option they have is to move up higher in elevation. This type of movement has obvious limits. For one thing, you can’t go any higher than the top of a mountain. For another, you run out of soil to support plants which can support animals, often way below the top of the mountain. So, for long term persistence of many species, moving north is the only viable option.
Pikas are one species that is moving up in elevation to find cooler temperatures as the climate warms. They are already living as high as they can go and they will have almost no possibility of moving north. 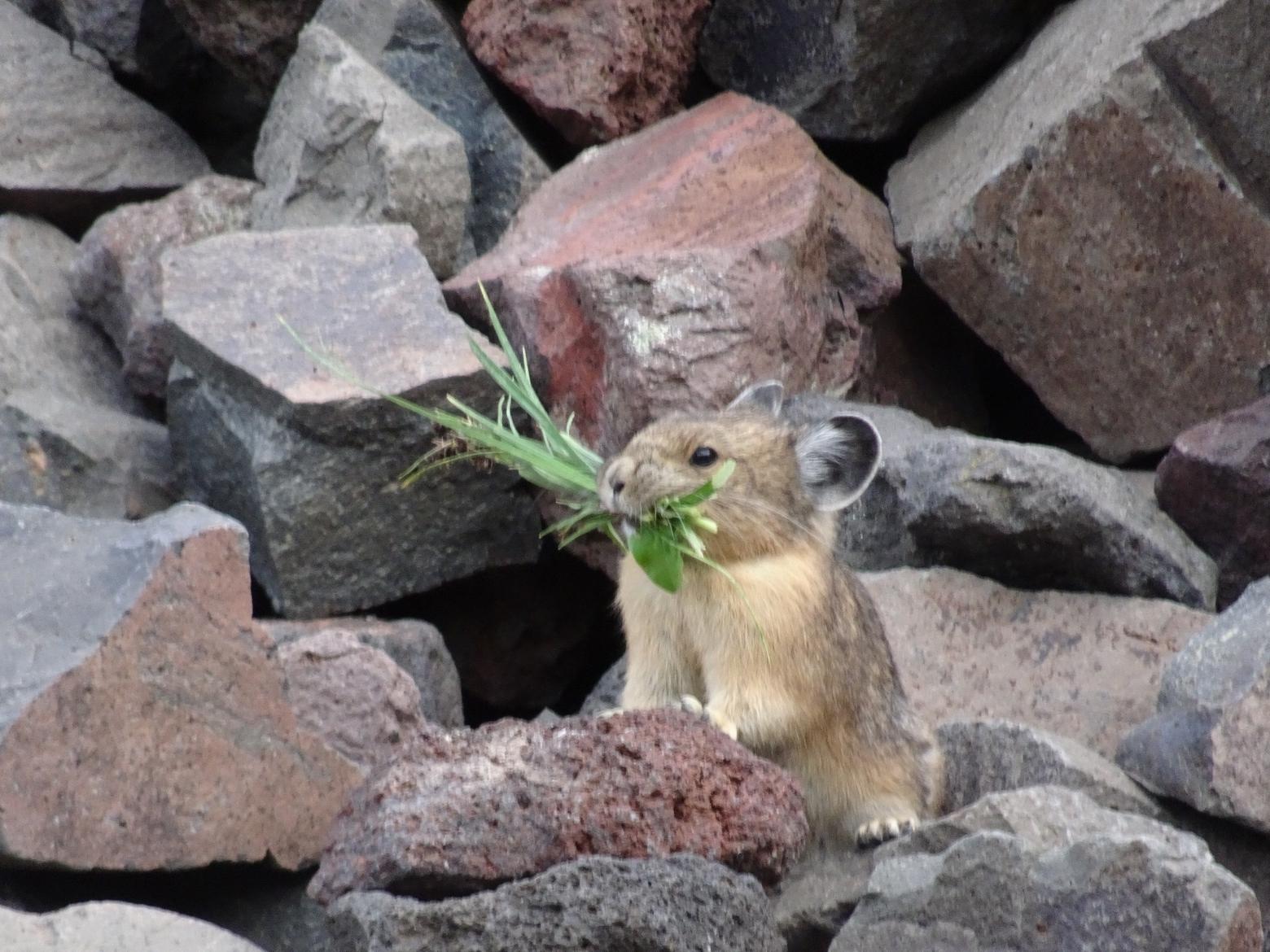 A pika up high in Greater Yellowstone. Photo by April Craighead
Not surprisingly, the human species is also shifting northward and higher in elevation; at least voluntarily for many of those who can afford to do so. The poorest and most disadvantaged in society, as always, are stuck with the worst places to live. Meantime, those cultures specially adapted to the cold in the Far North are dealing with a melting permafrost, loss of sea ice and, in the decades ahead, rising oceans likely to submerge coastal villages.
Human migration due to climate change is also greatly exacerbated by war, crime, hunger, and other social factors. Southern California, Arizona, New Mexico, Texas, and other southern states will soon be miserable places to live, if they aren’t already. Bozeman will be much nicer, comparatively even as it doubles and triples in size.
The Greater Yellowstone Ecosystem, and the remaining wildlands nearby, are caught in the crossfire of climate change, human population growth, and human migration. It is not surprising that Gallatin County is now the most rapidly growing county in Montana, and that Bozeman is the most rapidly growing small city in the United States. People who can afford to move somewhere nice are doing so in droves. And the more people that take up space here, drink the water, and cut down the trees, the less there is for the wild animals. There is no indication that it is going to get any better for wildlife any time soon. 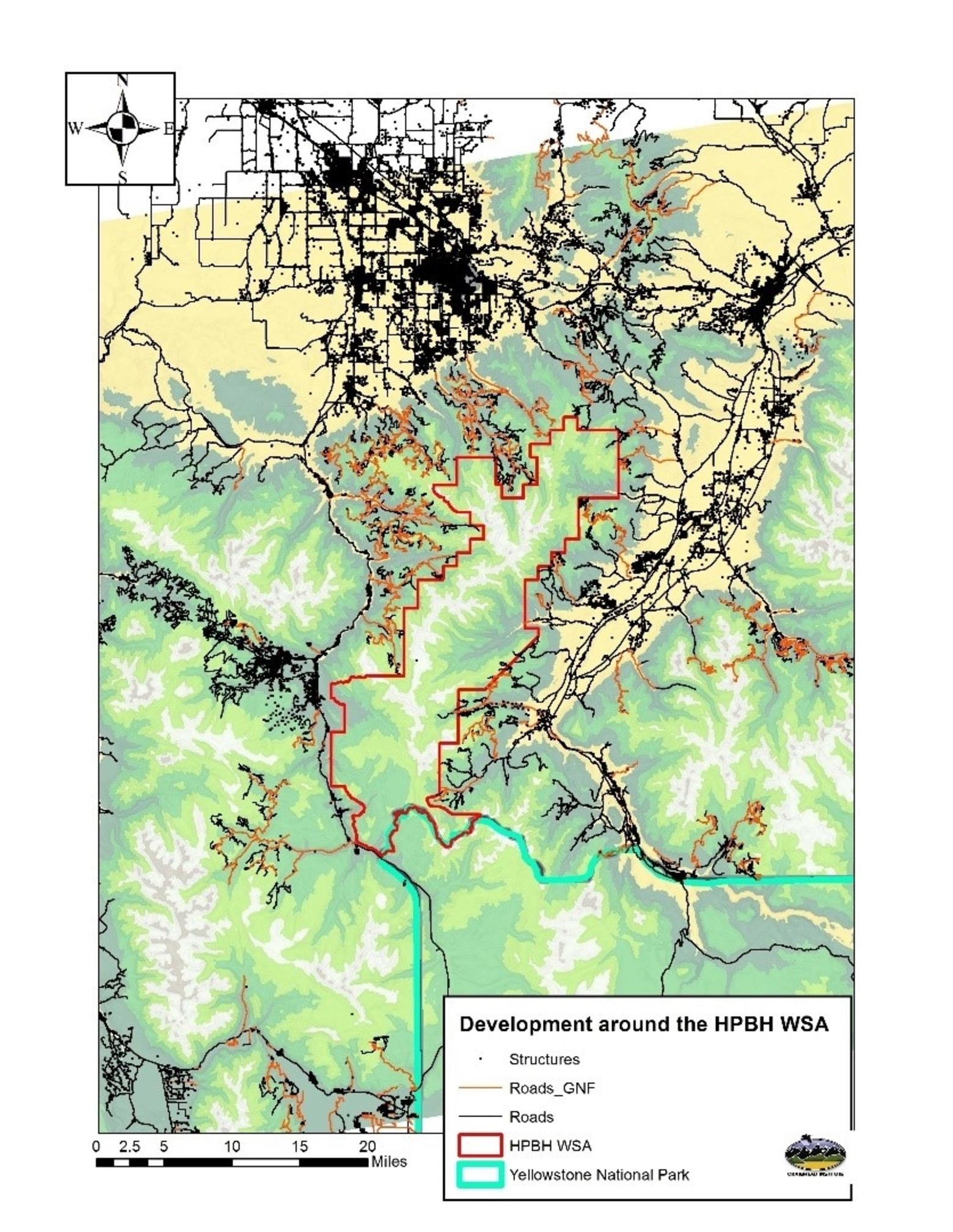 The crest of the Gallatin mountains are located within the red outline in the center. You can see the boundary of Yellowstone demarcated by green line. In yellow, to the northwest and directly east, are Bozeman/Gallatin Valley and Paradise Valley—development from from areas steadily pinching in upon the wild character that remains.
Some individual animals, like Jackson Hole grizzly 399, can learn to tolerate human disturbance; but the majority of sensitive animals cannot. Of course, some people don’t see that as a problem. Perhaps they’ve lived a perfectly fine life without elk or deer or lodgepole pines or wildlfowers. They won’t miss them. They certainly won’t miss grizzly bears or wolverines. Let ‘em go. They don’t see it as their responsibility. However, what they will miss is clean water and clean air and a relative absence of diseases and other pathogens that tend to increase as healthy ecosystems collapse. The wild ecosystems that remain are the life-support systems for our planet. As ecosystems lose species, and become simpler and simpler, the less they can maintain the conditions that we call healthy: for both us people and the rest of the environment. 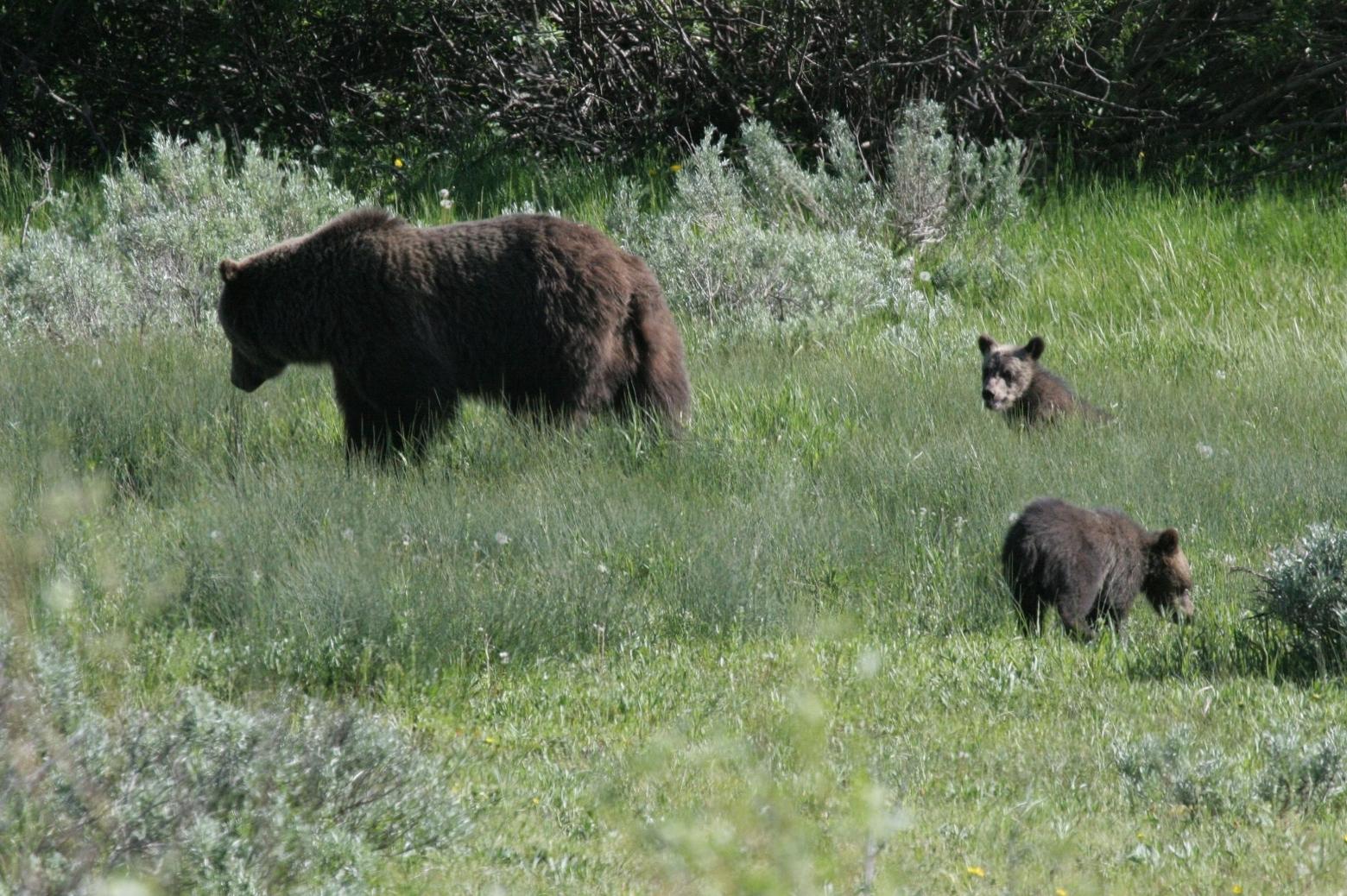 Jackson Hole grizzly mother 399 and one of her broods of cubs. Photo by Lance Craighead
The people who don’t see this as a problem often argue that mass extinctions have occurred in the past; the dinosaurs died out in one event; the large mammals died out in another; but things recovered and moved on. That may be true, but humans have a big stake in the coming extinction events; both because we have caused it and because it will greatly reduce our numbers and alter our way of life. Mass extinctions are not pretty events for the species that are being eliminated.
This all hopefully leads to the point I’m trying to make. At this juncture, we know our best shot to maintain biodiversity, and healthy living conditions for our descendants, is to keep as much of nature as possible. Don’t plow it under or pave it over or bury it under condominiums and malls. Don’t build impassable motorways, or fences. or walls. Keep it as wild as possible. Use wild places respectfully and leave as much as you can alone, unvisited, and undamaged. What we can preserve, we need to preserve strategically.
We need big natural areas; the bigger the better, so that they can hold more species. And we need to preserve contiguous natural areas, going south to north, like the Mackenzie Corridor. We need to protect wildlife corridors across the length of the continent and we need to protect them now.
EDITOR'S NOTE: Read Lance Craighead's last essay: Perilous Crossings 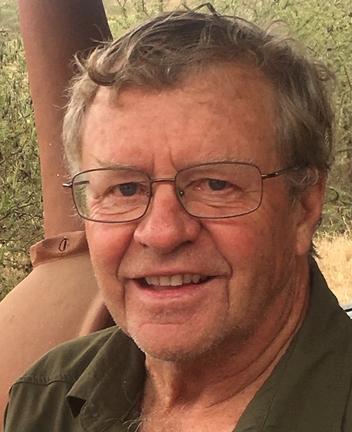 Frank Lance Craighead, PhD—he goes by "Lance"— is son of the late Frank Craighead and nephew of John Craighead—twin brothers who were involved with pioneering research on grizzly bears in the Greater Yellowstone Ecosystem and birds of prey. Their work was featured by National Geographic. Lance and his wife, April, are chief scientists with the Bozeman, Montana-based Craighead Institute, founded by Frank Craighead.