Wildlife: The Local 'Stakeholders' Often Given No Voice Or Forgotten 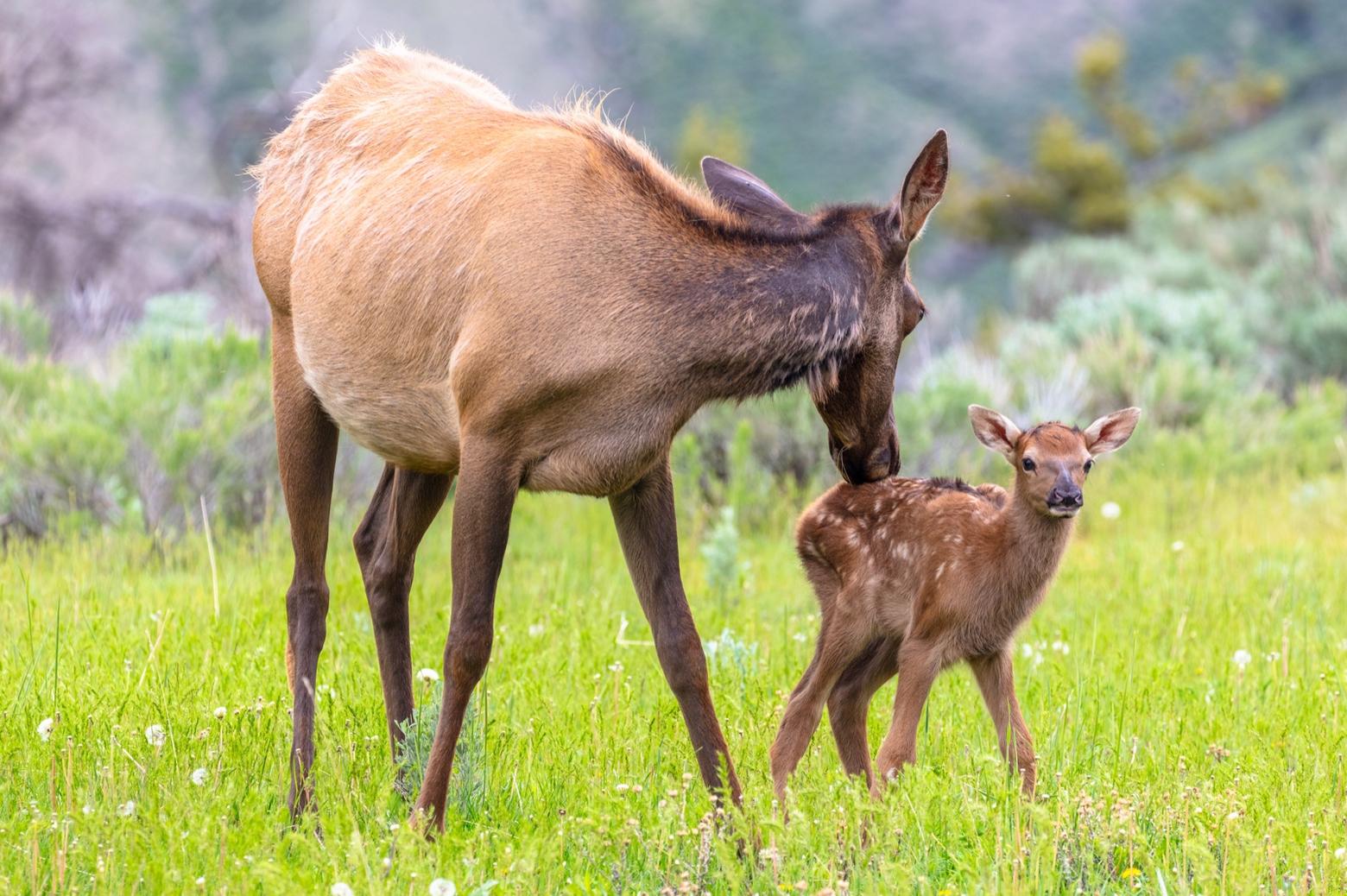 A mother elk and her calf, among thousands of adult wapiti that migrate into Yellowstone National Park from every direction in late spring and then give birth to young. Elk are vulnerable to disturbance, not only form development impacting habitat but studies show how recreation pressure on trails can displace elk from places where they want to be. That's why Wilderness areas, where typically there is less of a hubbub of human activity, are important places where elk can have habitat security. Photo courtesy Jacob W. Frank/NPS
EDITOR’S NOTE: Over the coming months, Mountain Journal will be publishing a number of pieces about “wilderness” from different perspectives. While there are some who claim that capital W wilderness lands are of limited public use and benefit, history in the Greater Yellowstone Ecosystem and scientific research suggests otherwise. Wilderness represents some of the richest and most important habitat for seasonal wildlife migrations and quiet places of protection for wildlife during critical times when non-human mothers are raising young; many rivers vital to trout and clean water are born or pass through wilderness; and wilderness lands are among the natural areas considered important in the sequestering of carbon dioxide. Along with high non-amenity values, such as having landscapes with unparalleled diverse wildlife left in the Lower 48, are “ecosystem services” that actually hold priceless value to humans and are delivered without intensive human "management."
by Anne Millbrooke
Local communities have a stake in wilderness— in the decision to designate wilderness or not,  and in planning for a future with or without any wilderness area nearby.
If you live in a community near public lands, you live in a gateway community, a gateway to those public lands. You have a vested interest in those local lands and the associated natural amenities.
In general practice, public lands decisions emerge from coalitions of local stakeholders advising public bureaucrats and politicians. Those stakeholders represent mostly commercial and recreational interests, and, yes, outdoor recreation is big business in the public lands states. Of course, there is token environmental representation, but—I would argue— no voice for the survival needs now, and in the future, for wildlife. No voice of the flora. No voice of all the waters. No voice of the birds or fishes. In fact, there are not seats at the table for those with no voice.
This is not a mere assertion. It is evident in the language of public comments being submitted to federal agencies and in the public opinions that appear printed in newspapers. You can count the number of times that "wildlife" is mentioned generally, or to specific recognition of critical habitat, and it is startlingly little. Human use is prioritized, advocated for and mentioned though the needs wildlife are given short shrift. And yet it is the presence of wildlife, its ability to persist and survive in a place, that confirms the quality of a wild place
Too many people are also voiceless in the wilderness decision-making process.
The fact is that all people who benefit from clean air, clean water, climate change mitigation, quality of life, outdoor recreation, an outdoor economy, even those individuals concerned about funding the local hospital or schools, are stakeholders in wilderness decision-making.
In general, there has been local opposition to conservation proposals for our public lands. Local business owners, Chambers of Commerce, owners of large properties, and county commissioners tend to oppose change. Any change could upset traditional business models and affect those people’s relative socio-economic standing in the community.
Moreover, change requires work—planning, implementation, and later adjustment of the plans to what’s actually happening. But these functions are normal functions of local government.
The traditional argument against wilderness designation is the “costs of opportunities lost,” generally a reference to extractive industries of mining, logging, and grazing. Livestock grazing extracts grasses, forage, and water, while displacing wildlife and degrading the landscape. Recently, the mechanized recreation industry and customers have acquired a loud voice.
But what about the costs of opportunities lost by blocking wilderness designation? That never seems to get discussed. The degradation of public lands through the lack of protection, I argue, brings higher costs of opportunities lost.

All the extractive industries and mechanized recreation on the public lands cause compaction of roads or trails, sedimentation or other runoff in the waterways, and thereby may contribute to the need to treat water for municipal use. Furthermore, public funds subsidize logging, mining, and grazing on public lands, and mechanized recreation, and those activities extend paths and roads that fragment wildlife habitat.
The people vested in the status quo do not necessarily reflect the community at large and certainly do not speak for the native flora, fauna, lands, and all of the waterways and wetlands that provide ecological services locally and in terms of downstream water users, regionally, and in terms of greenhouse gasses in the atmosphere, globally.
Democracy is a participatory life-style, not just an election event. Anyone can participate in decision-making about our public lands. Anyone can influence decisions impacting the local area—mostly by attending meetings and writing letters, such as letters to the editor of the newspaper, letters to the county commissioners, and letters to members of Congress. 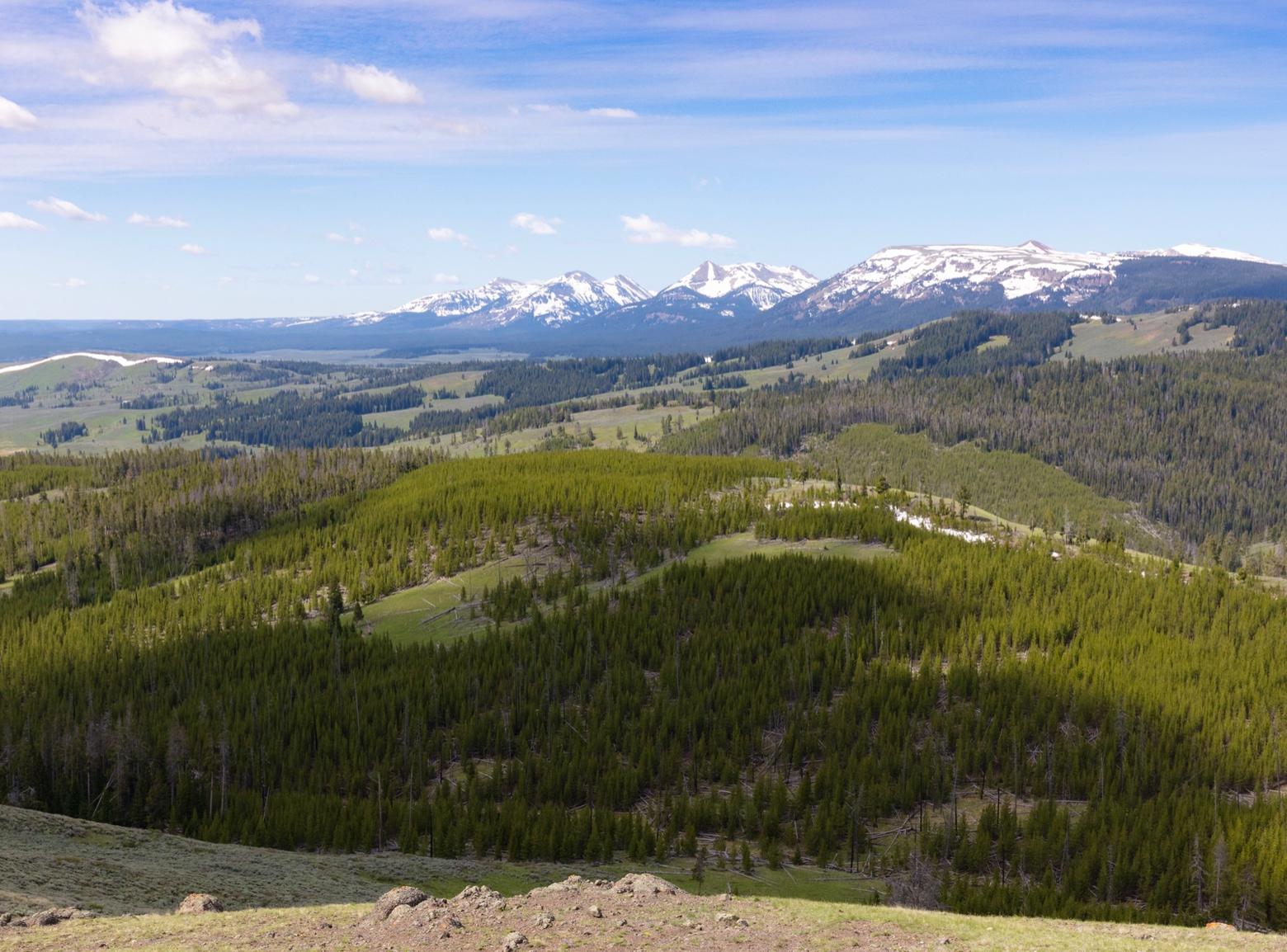 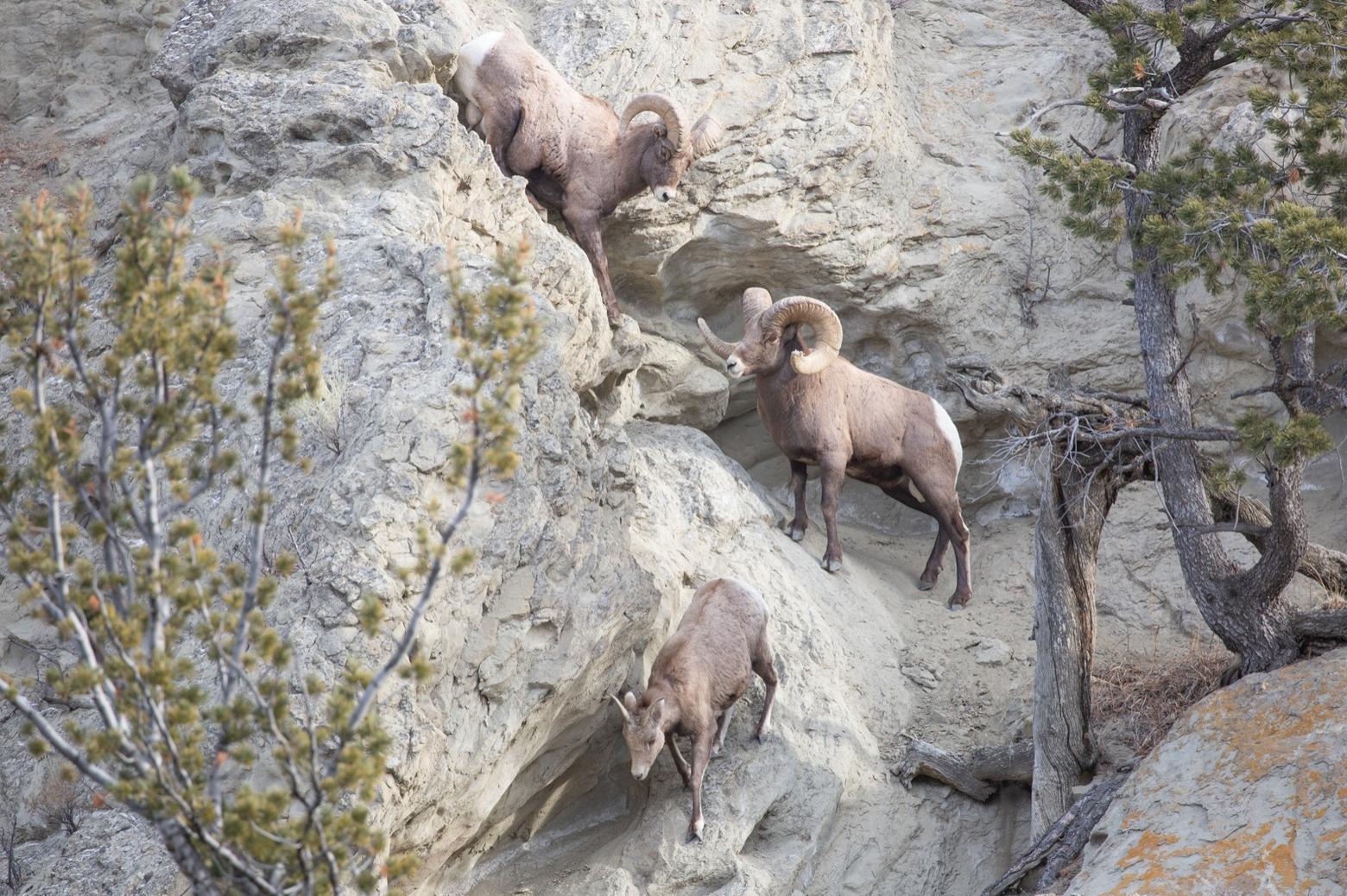 Top photo: From right to left the line of the Gallatin Mountains stretch north from Yellowstone all the way to the busy backyard of Bozeman. The Gallatins are being considered for wilderness designation. Notably, not only is their no road which bisects them once they leave Yellowstone but they have their full original complement of large and medium-sized mammals, largely owed to the quality of habitat. Photo just above: Bighorn sheep (aka wild mountain sheep) are sensitive to disturbance especially during winter when it difficult to find forage in the highest ramparts. In the Tetons, a small remnant herd of 100 bighorns is considered critically imperiled both by an invasion of mountain goats from the north but by backcountry skiers and snowboarders whose forays both displace the bighorns and stress them. Photos courtesy (far top: Jacob W. Frank/NPS) and (just above: Diane Renkin/NPS)
There are local-impact reasons, that I and many others believe, support wilderness designation for public lands in your area:
·      Federally protected areas have significant influence on where people choose to relocate.
·      Wilderness areas have particularly strong amenity pull on recruiting people, companies, and wealth.
·      Wilderness protected areas increase amenity migration and thereby increase county economic indicators, including tax revenues, per capita income, income growth, and employment.
·      Protected areas increase tourism and tourism spending.
·      Now is the time to designate roadless areas as wilderness before they are degraded; the roadless areas were inventoried with that purpose in mind.
·      Wilderness protects wildlife and native plant species (biodiversity), and it stores carbon.
·      Wilderness protects watersheds and the quantity and quality of water.
·      Wilderness does not limit the use of private lands or the multiple uses of other public lands.
·      Public lands are national resources for the benefit of future generations as well as for us.
Economists are studying the economic impacts of public lands on local communities. Headwaters Economics in Bozeman, the Conservation Economics Institute in Twin Falls (Idaho), the Gateway and Natural Amenity Region Initiative in Logan (Utah), the Economic Research Service of the U.S. Department of Agriculture, and others produce documentation of what has happened, what is happening, and what planning has proven effective.
One example of the growing literacy on the economic values of public lands, including wilderness, is the article Amenity Migration and Public Lands: Rise of the Protected Areas published in the journal Environmental Management.
The level of protection matters to the public lands and the nearby communities. Wilderness is the gold standard of wildlife habitat protection, followed by national parks and national monuments.
The experts agree that, in general, counties with lands under Wilderness protection have fared better in terms of population and economic growth than other counties, and next are those counties with national parks and national monuments.
You can make a difference. You can say if you want Wilderness as expressed through persisting wildlife populations to contribute to a sustainable local economy, public health, and quality of life. 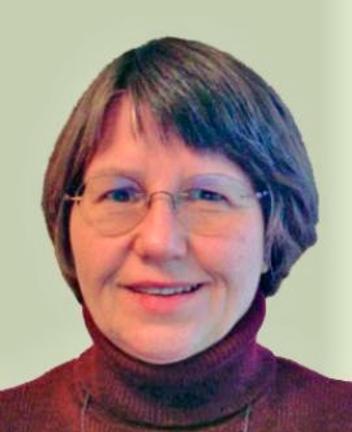 Anne Millbrooke lives in Bozeman, Montana and is best known for historical research and writing. She has a bachelors from Boise State, a masters from the University of Wisconsin-Madison and earned a PhD at the University of Pennsylvania in Philadelphia in history and the sociology of science. She has worked in corporate America and taught history at different universities in three states, including MSU. Along the way she's been the recipient of fellowships from the Smithsonian, National Science Foundation and NASA. She won an award for a book on aviation history. She is a past president of the Sacajawea Audubon Society.


Increase our impact by sharing this story.

GET OUR FREE NEWSLETTER
Never Miss A Big Story!