Wyoming's Bet On Coal Is Now Busting The State

Cursing at the wind? The more that its elected officials dig in their heels for coal, the further behind Wyoming falls in people and durable job creation 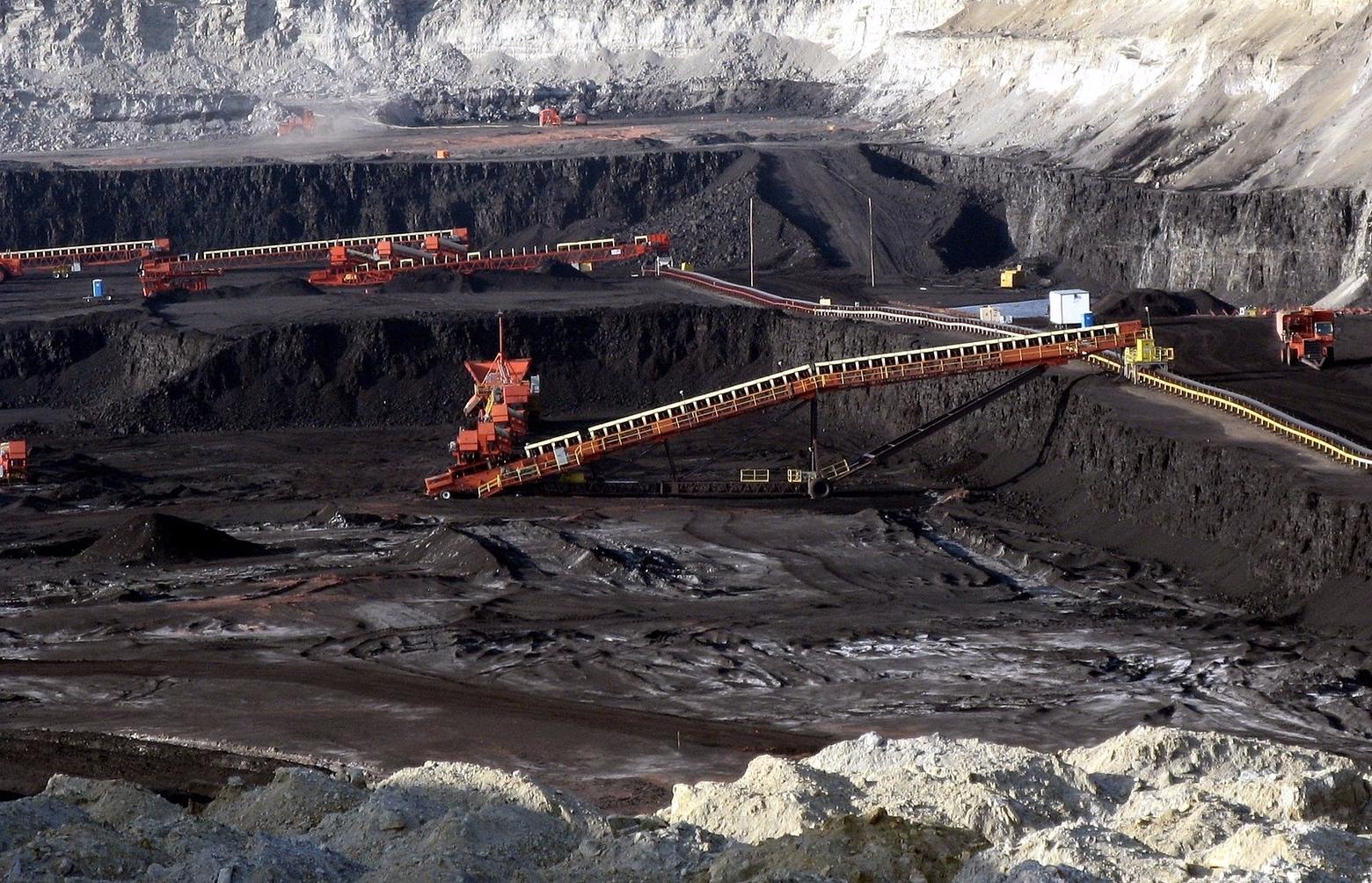 A coal strip mine in Campbell County, Wyoming outside of Gillette. Photo courtesy Greg Goebel under Creative Commons license to Wikimedia
Wyoming is the least-populous state in the nation and people are leaving again. The exodus could turn to droves.

It was little more than three years ago when then-Wyoming Gov. Matt Mead evinced the look of a high-stakes, high-rolling, high-risk gambler and held a press conference in Cheyenne.
Despite what numerous national energy commodity experts were saying about its dim outlook, Mead declared that, in terms of Wyoming’s future, the state was “doubling down” on its defiant bet that coal mining would deliver the Equality State to economic prosperity.
The gambit came only months after Mead, along with other elected officials in the state, claimed the US Environmental Protection Agency, under then-President Barack Obama, “was shutting down the coal industry.” 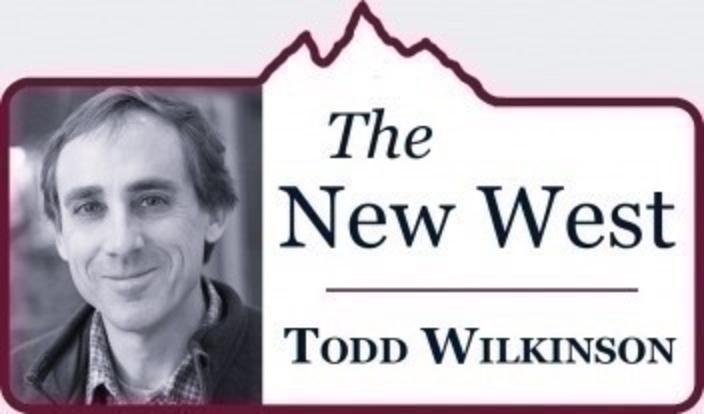 This followed years when policymakers bent over backwards to accommodate large coal producers whose message essentially was: trust us, let us do what we want, help us open new coal tracts on federal public land, and we’ll make you rich; we’ll contribute to your campaigns for elected office; we’ll rhetorically help you claim that the science documenting climate change is a lie; we’ll keep your citizens employed; we’ll pay taxes so you never have to think about pondering other revenue sources; and we’ll honor our commitment to heal the environment if we ever leave, which will be a long time from now.
Three short years later, the coal industry in Wyoming is in dire straits.
One by one, major coal companies are reeling and coal strip-mines have shuttered. Some companies have declared bankruptcy, putting thousands of miners out of work, leaving them to worry if employers will actually honor their long-promised pension obligations. Those overseeing state and local governments are also in full panic mode.
Those who stridently defended the coal industry— who chose to ignore the reality that proliferating extraction of cheaper natural gas was destroying the market for coal—now have to contend with historians who will judge their duped thinking harshly.
Travel back in time half a decade and it would have been impossible to ignore the cautionary advisements of professor Rob Godby, affiliated with the Center for Energy Economics and Public Policy at the University of Wyoming. He correctly said a brutal reckoning was coming for the state.
Godby, whom I interviewed, wasn’t alone in his predications but he certainly was among the bravest. His candor required incredible courage to publicly question the coal industry’s swagger in state politics.
Along with it, Wyoming’s three-member Congressional Delegation has helped President Donald Trump repeal nearly every regulatory obstacle the coal industry didn’t like. Even with that, the prognosis for industry isn’t good.
Lest we forget, state lawmakers earlier threatened to withhold funding for the state’s most prominent institution of higher learning, the University of Wyoming, if any of its faculty openly questioned the power of coal interests.

Lest we forget, state lawmakers earlier threatened to withhold funding for the state’s most prominent institution of higher learning, the University of Wyoming, if any of its faculty openly questioned the power of coal interests.

Even a public outdoor fine art installation alluding to climate change on campus was ordered removed because it offended elected officials loyal to industry.
So much for academic freedom.  In emails obtained by the Casper Star-Tribune a few years ago, Peabody Energy, which has gone through one bankruptcy, told university officials that allowing the sculpture to stand might make it reconsider its $2 million donation to the university.
In Cody, some local school board members, in deference to coal, suggested that the science of climate change be downplayed or stricken from public school text books.
Before me right now is a policy statement U.S. Rep. Liz Cheney released in 2016 when she was running for a House seat.
Besides her straight-faced insistence that the opinions of experts on climate change at the National Academy of Sciences and other respected institutions are based on “junk science,” Cheney continued to assert the now-debunked position that a War On Coal was being waged by the Obama Administration and environmentalists.
To accommodate the desires of coal lobbyists, Cheney vowed to rescind the Obama Administration’s Clean Power Plan (which, according to experts, was only a minor factor in the decline of coal). Cheney devoted herself to “repealing mercury and air toxic standards,” “repealing the regional haze rule,” “lifting the moratorium on coal leases on federal lands,” “enacting legislation that prohibits the regulation of carbon dioxide,” “abolishing the EPA,” and, among other things, “building a nationwide coalition to fight for our coal industry.” 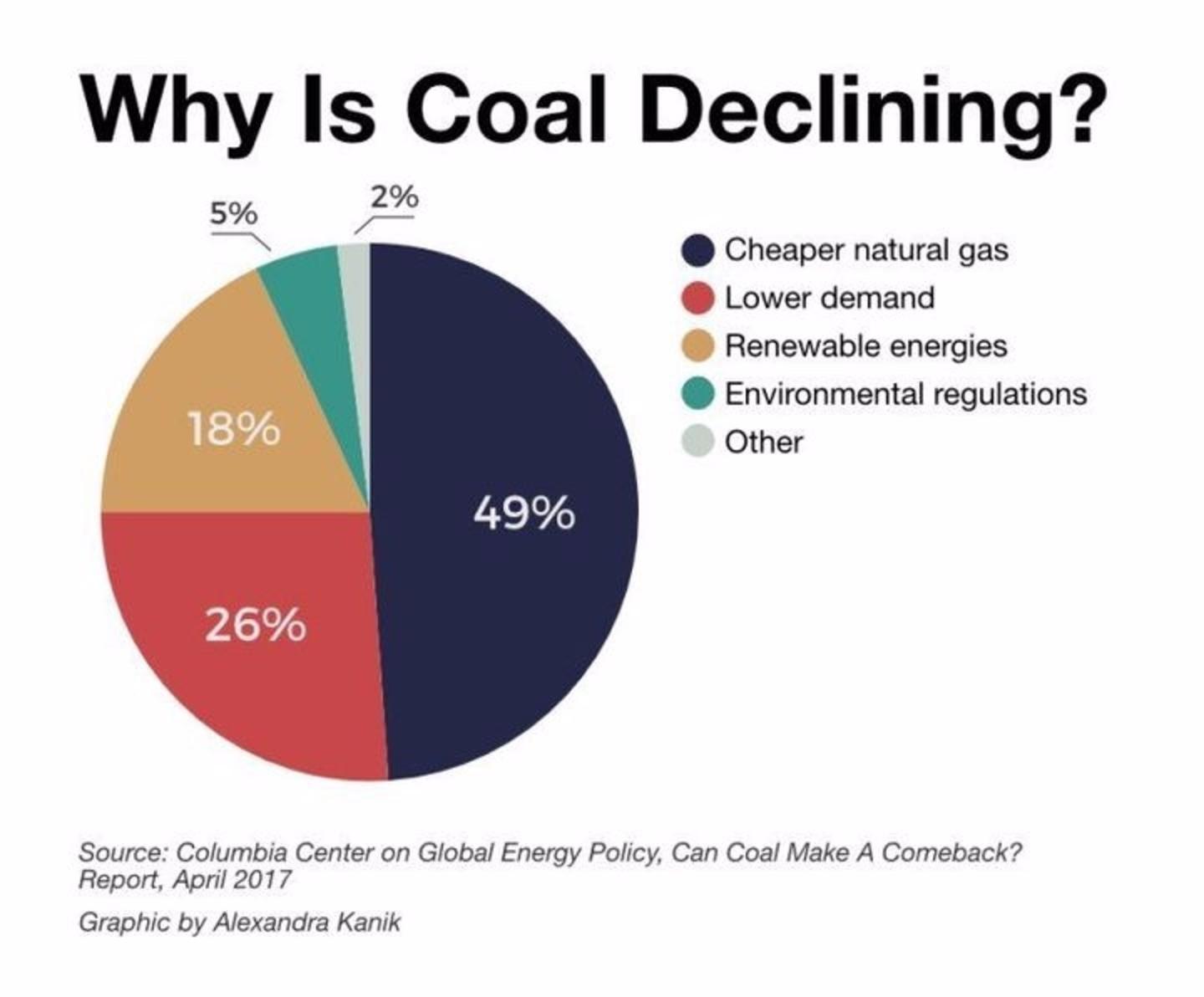 Graphic courtesy Alexandra Kanik/Ohio Valley ReSource (ohiovalleyresource.org)
Cheney vowed to give the coal industry everything it wanted.  Some coal tracts on public lands aren't being leased or developed by companies that already have the rights due to questionable economics. And companies operating power plants have turned their backs on coal even though it's being offered at near giveaway prices.
Across the state line, in Montana, state legislators this year advanced a bill that would have allowed NorthWestern Energy to buy ownership of coal-fired power plants at Colstrip for $1 and pass along significant liabilities for clean-up costs to ratepayers without oversight from the Montana Public Service Commission. The desperate measure went down in defeat in the House.  (Listen by clicking here to John Adams of Montana Free Press's interview with Republican State Sen. Duane Ankeny of Colstrip and Anne Hedges, coal industry watchdog with the Montana Environmental Information Center).
In some ways "the coal industry" is at war with itself. Interestingly, Cheney has opposed subsidies that would help Appalachian coal mines stay in operation. Why? Because those mines would compete with mines in Wyoming. She also has voted against subsidies for renewable energy such as wind—of which Wyoming has an abundance; in fact, its development could contribute to economic diversification.
Today what is the coal industry giving Wyoming in return? Be sure to read David Roberts' piece in Vox, "Coal Left Appalachia Devastated. Now It's Doing The Same To Wyoming."
We know, with the clarity of hindsight, that the truth eventually wins out over those who insist it doesn’t apply to them.  If any “war” is being waged against coal, it is by the combined market forces of natural gas and renewables each year eating into a bigger share of coal's pie.  Wyoming today is worse off not because it held the coal industry to account, but because it didn’t and has no back-up plan.
During the boom years, Wyoming politicians refused to accept the reality that the demise of coal was rapidly approaching.
“We can win this fight, but to do so, we must bring national attention and focus to this issue,” Cheney said in 2016.  Does she really want national attention brought to the fact that Wyoming politicians have made it a poster child for how not  to plan for the future?
Note: the American economy has not tanked, as some predicted would happen, if coal-fired power went away.  The tragedy is how coal workers have been used as pawns that don't now know who their champions are.
Still, isn't it ironic that, in a state where the federal government is frequently cast as an enemy, some miners and devastated communities may someday need federal disaster aid?  To see how Mr. Trumps’s vow to resurrect the fortunes of “beautiful, beautiful, clean, clean coal” is faring, he ought to visit Gillette and Colstrip.