Back to Stories
Bison, Yellowstone 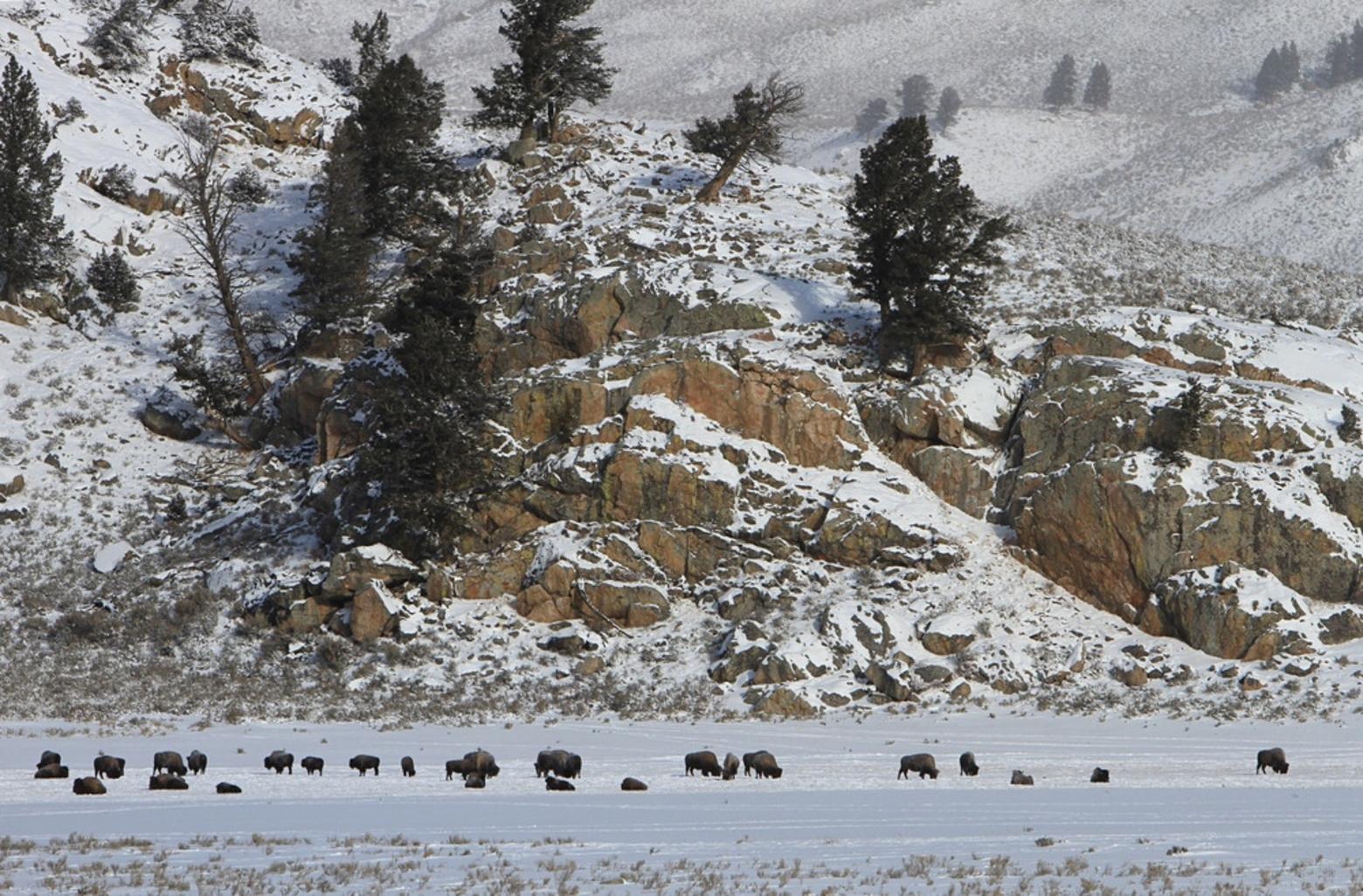 Yellowstone bison seeking food in winter. Photograph by Jim Peaco, National Park Service
Yellowstone National Park law enforcement officials are now investigating possible criminal trespass and tampering that resulted in the release of 52 wild bison being held in quarantine at the park’s Stephens Creek corral facility located just inside Yellowstone’s northern border.
The acts, which occurred sometime prior to the morning of Tuesday, January 16, are seen as a setback to efforts by Yellowstone to keep more migrating park bison alive and potentially used as seed stock to build a new wild herd on the Fort Peck Indian Reservation as well as other potential release sites in the future.


Park spokesman Morgan Warthin said that because of the active investigation more details could not be shared. However, she noted that the illicit action disrupted a quarantine process rapidly progressing toward clearing bison for being transplanted on the northern Montana prairie.


According to a binding, court-ordered agreement between the state of Montana, Yellowstone and the federal Animal and Plant Health Inspection Service, bison that wander into Montana can normally be killed to prevent them from potentially coming in contact with domestic cattle.


Such lethal management, part of the Interagency Bison Management Plan enacted 18 years ago, has been carried out under the premise that bison pose an imminent threat to passing the bovine disease, brucellosis, to livestock. Yet, as a report released by the National Academies of Sciences noted in the summer of 2017, there has never been a confirmed case of wild Yellowstone bison transmitting the disease to cattle; nonetheless, more than 10,000 Yellowstone bison have been killed or sent to slaughter since the 1980s, sparking outrage among conservationists.
Read Mountain Journal's story on the Yellowstone bison controversy involving the state of Montana and the debate about brucellosis.


In an attempt to spare some bison from destruction, Yellowstone Superintendent Dan Wenk instructed his staff to capture some bison, hold them under quarantine to make sure they are not potential disease carriers and then make them available to tribes that want to bolster or establish bison herds.


Following the acts by yet-unknown trespassers who illegally released the 52 bison from two Stephens Creek pens, none of the liberated animals have yet been recaptured. The irony is that some of them, as a part of a park plan that calls for killing potentially several hundred bison this winter to reduce animal numbers inside the park, may now be subject to hunting, lethal culling or shipment to slaughter.


“This is an egregious criminal act that sets back bison conservation. It delays critical ongoing discussions about a quarantine program and the transfer of live Yellowstone bison to tribal lands,” Wenk said in press release. “The park is aggressively investigating this incident.”

"The criminals who broke into a national park facility to release these bison put at risk the safety of the animals that are now at risk of being culled and our park rangers who are rounding them up."  —Interior Secretary Ryan Zinke

Referencing the quarantine regimen, the park added, “The purpose of that [quarantine] program would be to augment or establish new conservation and cultural herds of disease-free plains bison, enhance cultural and nutritional opportunities for Native Americans, reduce the shipment of Yellowstone bison to meat processing facilities, and conserve a viable, wild population of Yellowstone bison.”


In the same news release, Interior Secretary Ryan Zinke was also quoted, “I am absolutely heartbroken for the Fort Peck Tribes who have been working with the park, the state of Montana, and Animal and Plant Health Inspection Service for years to repatriate these bison," Zinke said. "The criminals who broke into a national park facility to release these bison put at risk the safety of the animals that are now at risk of being culled and our park rangers who are rounding them up. I will be working with [U.S. Agriculture] Secretary Perdue to see if we can get back on track to transfer the brucellosis free bulls to the tribe this year."
Another irony is that secretaries Zinke and Perdue hold the authority to give bison room to roam outside the park now that the National Academies' report demonstrated that the overwhelming risk of brucellosis transmission is from elk, not bison. Beyond Yellowstone/s boundaries, the U.S. Forest Service, an agency under Perdue's command at the Agriculture Department, could allow for bison movement out both the north and west sides of Yellowstone, including into the Taylor Fork drainage which the state of Montana has acknowledged would be suitable for a small subherd that could be subject to a limited hunt.


This is the second time in a decade that trespassers have freed bison from quarantine. In the wake of the latest incident, Wenk issued a closure of the area around Stephens Creek to all public use. 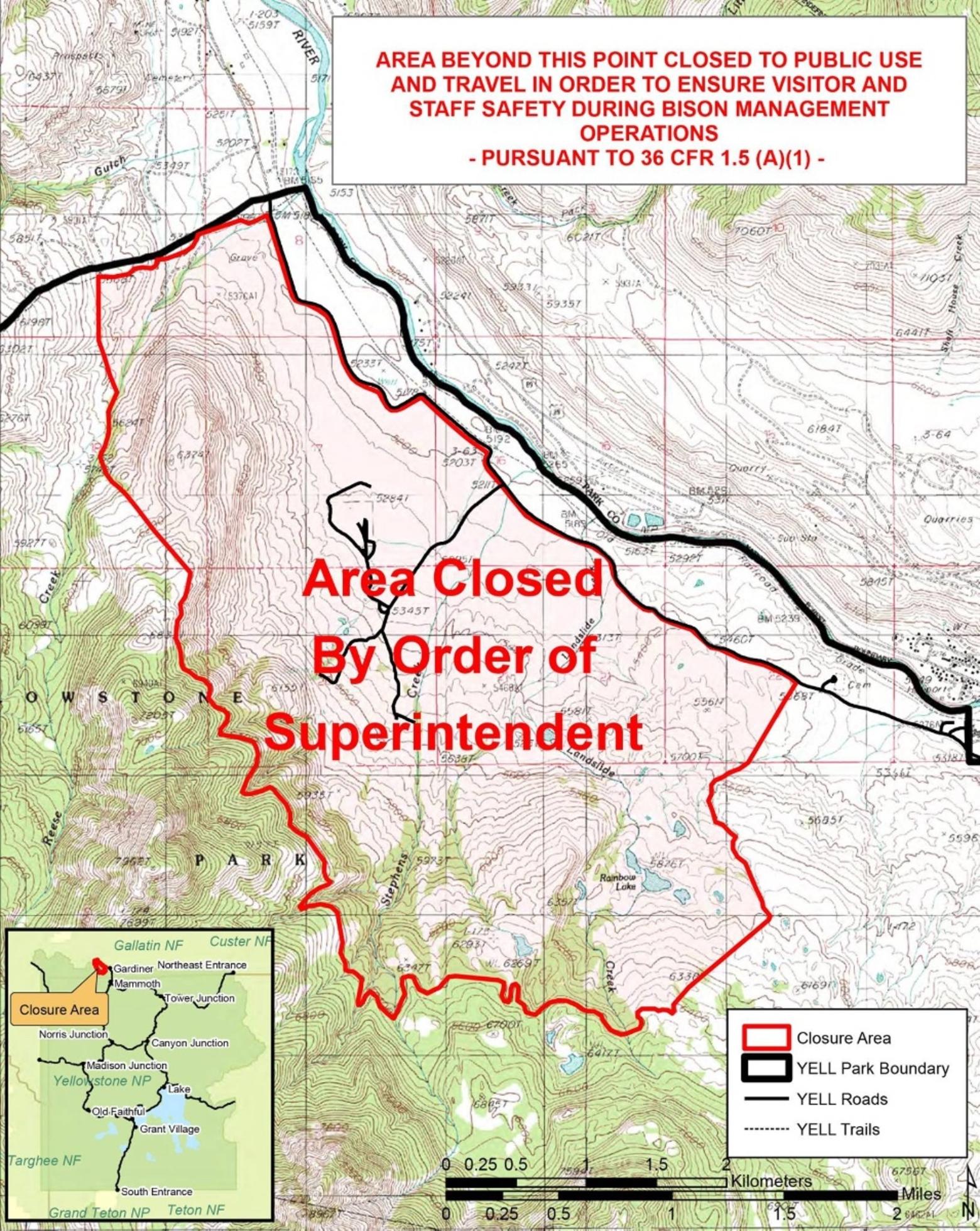 In response to a criminal investigation focussed on the illegal release of bison, Yellowstone Supt. Dan Wenk declared that an area around Stephens Creek along the park's northern border is now closed to public access.
Until a new Interagency Bison Management Plan is completing, the old one remains in effect and it calls for inclusion of the tribes in management decisions since, under historic treaty, consultation with tribal governments is required.


The Buffalo Field Campaign, a bison protection group based near West Yellowstone, Montana issued its own press release Wednesday and claimed that if Interior Secretary had plans for moving bison to Fort Peck it was news to the tribe.  Ft. Peck Tribal Chairman Floyd Azure said he wasn’t aware of any imminent shipment of Yellowstone bison.


Mike Mease and Stephany Seay of the Buffalo Field Campaign said that just because bison are in quarantine it does not guarantee animals will not be shipped to slaughter.  Some 24 Yellowstone bison were placed in quarantine pens since march 2016 and another 28 were added to the facility in March 2017.


The Buffalo Field Campaign is among more than half a dozen wildlife conservation groups that have pressed for the new bison management plan to allow animals to range on public lands outside the national park.


Regarding the alleged criminal trespass incident, park spokesman Warthin said that anyone with information is encouraged to call the Yellowstone National Park Tip Line at 307-344-2132,  email Yell_LEO@nps.gov or visit http://go.nps.gov/tipline.
Increase our impact by sharing this story.

GET OUR FREE NEWSLETTER
Never Miss A Big Story!

Is Pat Clayton The Finest Fish Photographer In America?
With a sense of urgency, feisty spirit and an incredible eye, this talented witness turns wild trout and salmon into art...
Read
Yellowstone